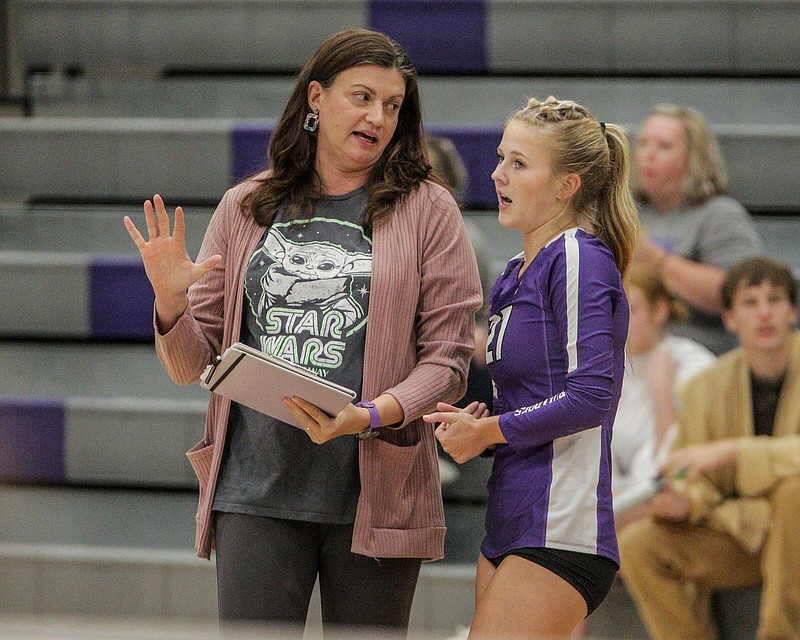 Coach Jessica Phelan (left) and the Fayetteville Lady Bulldogs went 5-1 over the weekend to finish third at the Durango Fall Classic in Las Vegas. (Special to the NWA Democrat-Gazette/Brent Soule)

The Fayetteville Lady Purple Bulldogs volleyball team showed that not only is it among the best teams in Arkansas. But it can be counted among the best in the country.

Fayetteville coach Jessica Phelan said her team had earned the right to be challenged after winning back-to-back state titles and they got exactly that.

"You sign your team up for Durango because you want to be challenged by some of the best teams in the country," Phelan said. "I think that for me as a coach these kids have earned that opportunity. For the kids, I think they embraced that opportunity.

'They're a bunch of fighters. They want to put it out there for each other for their town and their state. I think more than anything they just played hard. We snuck out a win on the first day to make it, then we won a couple on day 2 to make it to the semifinals and then they had to muster whatever gas they had left in the tank to finish off that third-place game. Bottom line there's a lot of good teams and just no time to let up, so I was just proud of how hard they played."

But the Purple'Dogs bounced right back into 6A-West Conference play with a 3-0 win at Springdale Har-Ber on Tuesday.

Outside hitter Brooke Rockwell and setter Kennedy Phelan were both named to the all-tournament team at Durango. Phelan has committed to play at Florida State, while Rockwell will play beach at Stanford.

Rockwell finished with a match-high 21 kills and Phelan dished out 39 assists in the win at Har-Ber.

Fayetteville earned a hard-fought three-set win over Coronado (Nev.) to win its pool on Friday. The Lady Purple'Dogs dropped the first set 26-24, but fought back to win the third 27-25. They also earned a tough three-set win over Iolani, a private school in Hawaii, to advance to the championship round.

That performance allowed them to climb a spot to No. 3 in the Max Preps national high school poll, which came out on Tuesday.

Lady Bulldogs coach Jennifer Golden couldn't be more pleased with her team's position as we approach the middle of conference play.

"I feel like we are in better position than I expected at this point," Golden said. "We have our ups and downs like any team, but I feel like we're making that climb to where we need to be.

"Honestly, I feel like the things we are hitting hard in practice, I'm starting to see in the matches. ... It's been really encouraging to see that they're making that transition from practice over to our game-play and making adjustments in the middle of games, too."

Greenwood (9-2) suffered its only losses to Class 6A Bentonville and Fayetteville, which is currently ranked third in the nation in the latest Max Preps poll.

Myia McCoy, a 5-10 junior outside hitter, is a force offensively and has picked right back up after a stellar sophomore season.

Graduation cost the Lady Bulldogs some height, but that hasn't slowed their production.

"Mainly the returners have just stepped into the roles of 'Hey, we're gonna continue what we finished.' And they're doing really. well."

The Class 3A Lady Hornets are surprising even their coach as we hit the mid-point of conference play.

Hackett (13-0) has yet to lose despite graduating four seniors from last year's group.

"They've really performed above what I anticipated," Hackett coach Bridget Freeman said. "Anytime you lose a core group of your starters, you have to anticipate filling those shoes. The kids have really stepped up.

"Our focus has been defense and we feel like if we can start our offense with our defense then we can play with anybody. I have the setters and I have the hitters, so we had to make sure we were getting the ball to them and they've done really well."

Hackett has notched wins over rival Paris, Class 4A Shiloh Christian and 5A Van Buren already this season.

Freeman said the group went forward after losing a pair of close sets in a preview event to Baptist Prep and 5A Little Rock Christian.

"We talked about why we lost and how we had to get past the seniors were gone and we weren't gonna discuss it anymore," Freeman said. "That really seemed to help, losing those two super close ones to good teams. Losing close matches kinda fired my kids up and they just took it and ran with it."

Lady Saints coach Nathan Bodenstein was happy with the way his team performed in a tournament with a loaded field in Springfield, Mo. over the weekend.

Despite losses to Missouri powers Nixa and Republic, the Class 3A Lady Saints (10-3) showed well. In addition, Bodenstein pointed out his team sort of ran out of gas after playing 33 sets in a seven-day period.

But Shiloh Christian hasn't had to rely on one or two players to carry the majority of the load, Bodenstein said.

"This year it is very spread out and we're a lot harder to scout because we're not relying on just one person," Bodenstein said. "We've always had really good hitters and lots of height. But yes difference-maker there is we're in system a lot."

Reese Jones, a 5-10 sophomore, is getting the chance to hit outside and doing well after setting most of her career, Bodenstein said.

"Reese has never hit outside in her life and she's hitting over .200," Bodenstein said. "I think second on the team in kills. I was like 'Go out there and hit.' And she's done a great job."