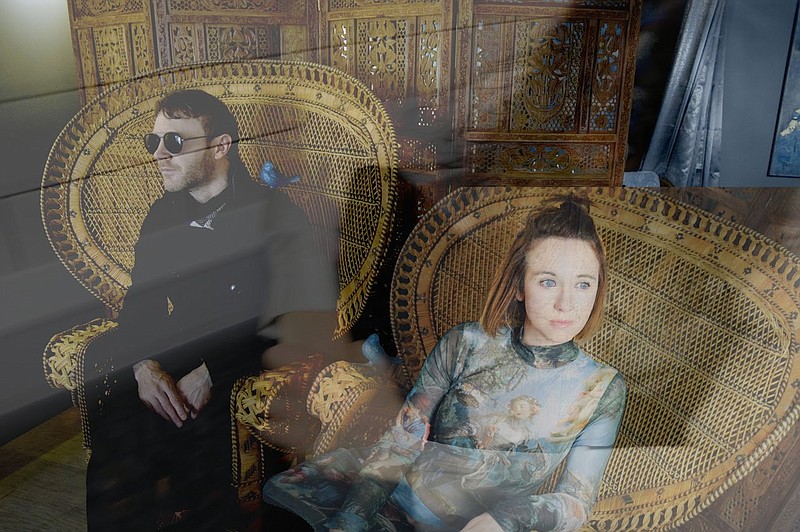 Rhydian Dafydd and Rhiannon “Ritzy” Bryan of Welsh band Joy Formidable will open for Front Bottoms tonight at The Hall in Little Rock. (Special to the Democrat-Gazette/Joy Formdiable)

It's late August and Joy Formidable singer-songwriter-guitarist Rhiannon "Ritzy" Bryan is at a Los Angeles storage unit digging through the band's equipment. Bryan and her band mates — bassist Rhydian Dafydd Davies and drummer Matthew James Thomas — are preparing for a tour that brings them to The Hall in Little Rock tonight opening for Front Bottoms.

It has been a while since the band, which was founded by Bryan and Dafydd in 2007 in their Welsh hometown of Mold, has laid eyes on some of this stuff.

"Because of the pandemic and having to postpone dates, we are in our storage locker seeing our U.S. gear for the first time in three years," Bryan says with a chuckle.

The group had a little taste of performing at a couple of summer festivals, but this is the first time since the pandemic forced the cancellation of a 2020 tour that the band is on the road for multiple dates.

"It's been a minute, but it's going to be really exciting to get back to it," Bryan says.

This is also the first time the band has been able to tour its 2020 album "Into the Blue," which was reissued Sept. 14 with two new tracks, "Adored or Bored" and "Csts." The album, the band's fifth, follows 2018's well-received "AAARTH" and showcases Joy Formidable's skill at crafting big, dramatic, alt-rock songs with flourishes of electronica and pop.

While they may have been off the road, the band stayed in touch with fans through its successful TJF Music Club, which offers special perks to members like access to new music and livestreams.

"It's like a new and modern version of fan clubs where you can share special things with your fanbase," Bryan says. "We love it, and I'm really glad some of the shows and songs and covers we've put up exist. It's brought a different vibe of creativity for us."

Bryan is the only child of music-loving parents, and grew up with records and instruments around.

"I was very lucky," she says. "Our house was kind of on its own with a lot of greenery and lush, rolling hills. It was quiet, but I had parents who collected a lot of records so I had a lot of nice vinyl records to enjoy."

There was a concert venue not too far away where touring bands like Radiohead and Welsh acts Super Furry Animals and Gorky's Zygotic Mynci played, she says.

"That was really influential in those early days, seeing shows, because there wasn't much else going on. And my parents were into it, so we got to go see shows in Manchester and Liverpool."

She started writing songs at a young age.

"There were a lot of instruments in our house. I was in elementary school, I think, when I started guitar lessons ... I started playing classical guitar and going through the classical system. I also loved how mobile the guitar was. I could take it to school and be in bands and make friends."

By her teens, she says, she started branching out from the classical, technical side of the instrument and got into using pedals and other effects to coax different sounds from her guitar.

"I've definitely come from a background of experimenting. I probably enjoy that more than how fast I can shred or solos or anything. The construction of songs, that's what I get really excited about."

Bryan has lived off and on in Utah for almost a decade, but says she might be up for a change of scenery. Guess where she's thinking of moving.

"I really love Arkansas," she says with a laugh. "I've been on vacation there a lot. Honestly! I like coming to Little Rock, and everyone has always been so warm and friendly. And I love Hot Springs. In fact, I've been having moments of thinking I should go live in Arkansas. I'm super excited to come back [on this tour]. I was like, maybe I could look around and see if I could find a little studio space for myself."