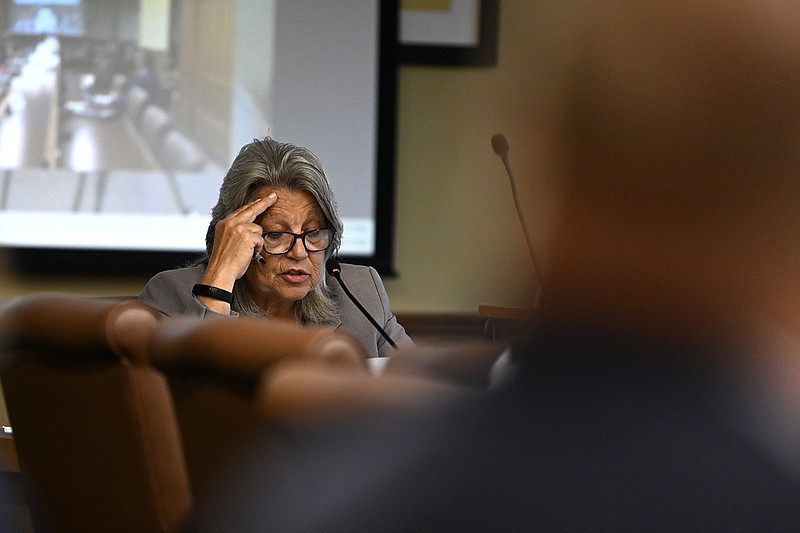 Cheryl May, director of Arkansas’ Criminal Justice Institute, leads a discussion during a meeting of the Arkansas School Safety Commission in the state Capitol on Wednesday. (Arkansas Democrat-Gazette/Stephen Swofford)

The Arkansas School Safety Commission will ask state legislators to consider recurring funding that would allow for school districts to implement recommendations made by the commission.

Commission members on Wednesday unanimously approved the recommendation by Dr. Cheryl May, director of the Criminal Justice Institute and head of the safety commission, to request that state legislators consider recurring funding for school districts to implement the recommendations.

"Just me personally," May said, "I don't think we can walk away from this table without trying to get our schools some additional financial help, because we are asking them to do a lot."

• Adopting Advanced Law Enforcement Rapid Response training and protocols to teach community members and staff what to do when presented with an active attack situation.

• Formation of a school safety unit at the Division of Elementary and Secondary Education to better ensure school districts are implementing school safety-related laws, providing support to districts implementing safety recommendations, and helping districts to identify gaps and finding the resources to fill those gaps.

Gov. Asa Hutchinson reinstated the School Safety Commission in June in the aftermath of several mass shootings across the nation.

Hutchinson has said he hopes school districts will use the updated recommendations when making requests for funding. Legislators approved a $50 million grant program during a special session in August that will be used to address recommendations made by the commission.

The state's original school safety commission, created in March 2018, submitted 30 recommendations in its 124-page report. Some schools have implemented portions of the original recommendations, but schools are not mandated to follow the recommendations.

Under the governor's executive order, the current commission is charged with reviewing the previous commission's report and providing an update on the status of school safety across Arkansas.

Commission members spoke for more than an hour Wednesday about the need to find recurring funding options for districts that might not be able to afford the recommendations.

"This commission has done outstanding work, but I am slightly concerned for those districts that don't have the funding for these recommendations," said Bill Hollenbeck, chief of police for Fort Smith Public Schools. "So creating this funding mechanism is vitally important and a needed conversation."

May requested that Greg Rogers, assistant commissioner of Fiscal and Administrative Services for the Division of Elementary and Secondary Education at the Arkansas Department of Education, speak to the commission about ways to set up a recurring fund for school districts and have it limited to implementing school safety recommendations.

Rogers said limiting the funding by attaching words such as "shall" to recurring funding requests or by making something a "requirement" could potentially cause difficulty for school districts to get federal funds.

"It limits what funds they can use and creates a gray area with federal funds," Rogers said. "If you left it as a recommendation, then it would be fine, but if it goes into law requiring these things then you might have a problem."

Rogers also said if funds were sent to districts using the basic matrix system that provides funding based on student population, the funds wouldn't have restrictions placed on them.

The concern of commissioners, May said, was creating a pot of money with no requirements attached to it would allow for schools to use the funds on anything they choose.

"We don't want them to just be given money that is not tied to school safety," May said.

Rogers said if it went through the matrix system legislators would be able to see how the funds were spent every two years during the adequacy study.

"That is one part of accountability, where if they are not spending it on school safety then they will have to answer questions for it," Rogers said. "It's still unrestricted funding, but there is a time period where expenditures are reviewed. But, once again, it's unrestricted and there is no assurance that it will be spent in that direction."

A.J. Gary, director of the Division of Emergency Management and the Arkansas Department of Public Safety, questioned if it were possible to instead create a continuous grant where schools could apply yearly to fund needed safety recommendations like school resource officers.

Hollenbeck said that option probably couldn't work because it would require schools and the school resource officer to go into each year unsure of whether the officer would have a job the next school term because of the application process. Rogers said also it might be a burden to the Department of Education to come up with that much money yearly for each district to have resource officers on campus.