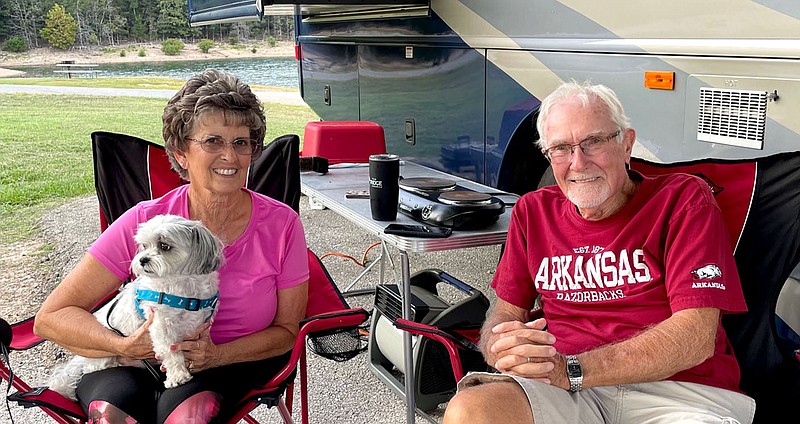 Cinda and Darrell Wooldridge — and their dog, Chico — are looking forward to attending homecoming for the Bentonville Tigers. Wooldridge is one of 31 remaining members of the BHS Class of 1957. (NWA Democrat-Gazette/Annette Beard)

In the bleachers at Bentonville Tiger Stadium this Friday, several of the fans will be from the Bentonville High School Class of 1957, cheering on their beloved Tigers and celebrating their 65th high school reunion.

Several of those class members recall their years as football players and their coach, Don Elliot.

Darrell Wooldridge of Pea Ridge and Eddie Black of Bentonville, two of those classmates, agree the lessons they learned from Coach Elliott provided the foundation they needed for their future personal and professional lives.

"In those days, we had one coach -- Coach Elliot. That's all," Eddie Black says. "He coached football, basketball and track. We didn't have baseball."

"We really had some good people! He only had one assistant -- the junior high football coach."

Coach Elliott visited with the student athletes for many years, often joining them at reunions, Black says. He died in 2017.

"We just had a wonderful coach. I really learned how to be more active in my career. He was an influence on a lot of people," Darrell Wooldridge says, adding that Wyley Elliott, editor of Celebrate magazine, was one of Coach Elliott's sons. "He brought his dad to one of our luncheons, and he said he just loved our Class of '57."

"He was also a captain ... he was a battery commander for A Battery in Bentonville. There were nine of us football players that were in the Army National Guard, and we had him as a battery commander. So he had a lot of opportunities to mold us and make us what we are."

More than half of the 81 graduates of 1957 are deceased. The 31 who remain are scattered from Florida to California. But some still live in Northwest Arkansas and meet monthly to reminisce with classmates.

Wooldridge spent much of his adult life in Wichita, Kan., and Tulsa, Okla., and says he lost touch with many classmates, but that after they celebrated their 50th class reunion, many of them stayed in contact.

Black was a member of the basketball and track teams and the statistician for the football team. He remembers the coach giving him his coaching whistle and lanyard, which Black treasured for decades. He recently gave it to the coach's son, Wyley Elliott.

Wooldridge was on the football team, basketball team and played American Legion baseball.

Both men remember attending classes in the building now known as Old High. The school superintendent was H.E. Baker, Wooldridge says. The principal of the high school was Henry Woods.

"I always thought Henry Woods was one of the toughest guys that ever was," Wooldridge recalls. "Except when we went on the senior trip to St. Louis and went to a Cardinals' baseball game. He let us do about anything we wanted to."

"I remember when (Arkansas) 102 was a dirt road. It was one of the last roads paved between Rogers and Bentonville," Wooldridge recalls. "Coming into Rogers on (U.S.) 71 from the Rainbow Curve, there was lots of farm land still, a lot of cattle, dairy farms ... the drive-in movie theater, the golf course right across from the drive-in."

The Class of '57 members plan to meet for lunch at 11 a.m. today at the Bella Vista Country Club. They will be recognized at an 11 a.m. assembly in Tiger Stadium Friday, Black says, and then attend the game that night.