The nation in brief: Another leak delays NASA moon launch; Alaskans get sum from investment fund; U.S. Embassy in Cuba to process visas; Rioter to appeal ban from elective office 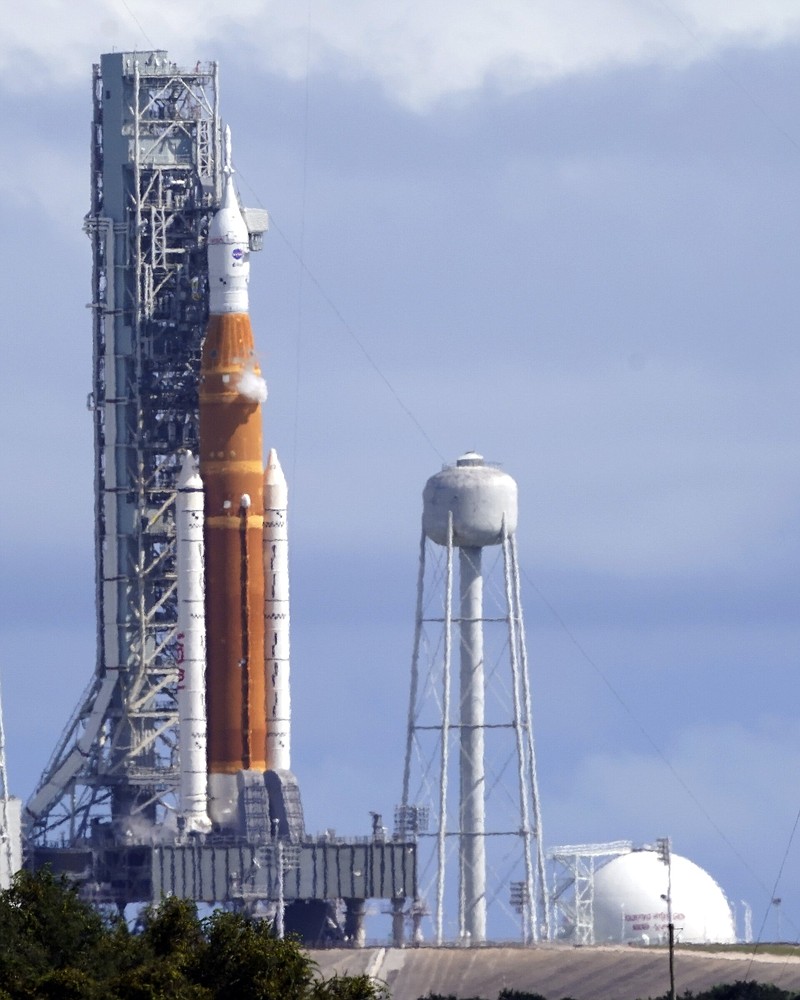 The NASA moon rocket for the Artemis mission stands on Pad 39B Wednesday at the Kennedy Space Center. (AP/John Raoux)

CAPE CANAVERAL, Fla. -- NASA's new moon rocket sprouted another fuel leak Wednesday as engineers tested the plumbing ahead of a launch attempt as soon as next week.

The daylong demo had barely begun when hazardous hydrogen fuel began escaping at the same place and same time as before, despite new seals and other repairs. Engineers halted the flow and warmed the lines in hopes of plugging the leak, then proceeded with the test. But the leak persisted.

Wednesday's results will determine whether the 322-foot rocket is ready for its first test flight, a lunar-orbiting mission with mannequins instead of astronauts.

Hydrogen leaks spoiled the first two launch attempts, as well as earlier countdown tests. So much hydrogen escaped during the countdown earlier this month that it more than doubled NASA's limit. Wednesday's leak came close to the limit, but the launch team managed to get it down to acceptable levels as the test continued.

After the previous delay, NASA replaced two seals. One had a tiny indentation -- one-hundredth of an inch.

"Now that doesn't sound like a lot, but again we're dealing with hydrogen," the smallest element on the periodic table, said mission manager Mike Sarafin.

Alaskans get sum from investment fund

ANCHORAGE, Alaska -- Nearly every single Alaskan got a windfall amounting to more than $3,000 Tuesday as the state began distributing payments from Alaska's investment fund, seeded with money from the state's oil riches.

The payments, called the Permanent Fund Dividend, or the PFD locally, amounted to $2,622 -- the highest amount ever. Alaska lawmakers added $662 as a one-time benefit to help residents with high energy costs.

A total of $1.6 billion in direct deposits began hitting bank accounts Tuesday, and checks will arrive later for those who opted for them.

Residents use the money in various ways, from buying big-screen TVs, vehicles or vacations to putting it in savings or college funds. In rural Alaska, the money can help offset the enormous costs of fuel and food, like $14 for a 12-pack of soda, $4 for a celery bunch and $3 for a small container of Greek yogurt.

"We're experiencing record-high inflation that we haven't seen since the first PFD was paid in 1982," Gov. Mike Dunleavy said in a video. "Alaskans have been bearing the brunt of this inflation from the gas pump to the grocery store, and this year's PFD will provide much-needed relief as we head into winter."

The checks couldn't come at a better time for those on the state's vast western coast, which was devastated last weekend by the remnants of Typhoon Merbok. Damage to homes and infrastructure was widespread along 1,000 miles of coastline.

WASHINGTON -- The Biden administration said Wednesday that the U.S. Embassy in Cuba will begin processing full immigrant visas early next year, making it easier for Cubans to reunite with family members in the United States.

The embassy in Havana last processed full immigrant visas in 2017. The U.S. government will also stop requiring Cubans seeking visas in family preference categories to travel to Georgetown, Guyana, for their interviews.

Additional government personnel will staff the embassy to handle the visa requests -- part of the commitment stemming from resumption of the Cuban Family Reunification Parole program last month. The 2007 program enables U.S. citizens and lawful permanent residents to apply for their family members in Cuba to come to the U.S. sooner than conventionally allowed.

Under accords with Cuba, the U.S. has committed to ensuring the legal migration of at least 20,000 Cubans per year, not including immediate relatives of U.S. citizens.

SANTA FE, N.M. -- A New Mexico politician and Trump supporter who was removed and barred from elective office for his role in the U.S. Capitol riot is attempting to appeal that decision to the state Supreme Court.

Cowboys for Trump co-founder and former County Commissioner Couy Griffin on Tuesday notified the high court of his intent to appeal.

The ruling against Griffin this month by a Santa Fe-based District Court was the first to remove or bar an elected official from office in connection with the attack on the Capitol.

Griffin was previously convicted in federal court of a misdemeanor for entering the Capitol grounds Jan. 6 without going inside the building. He was sentenced to 14 days and given credit for time served.

Griffin has invoked free-speech guarantees in his defense and says his banishment from office disenfranchises his constituents in Otero County. 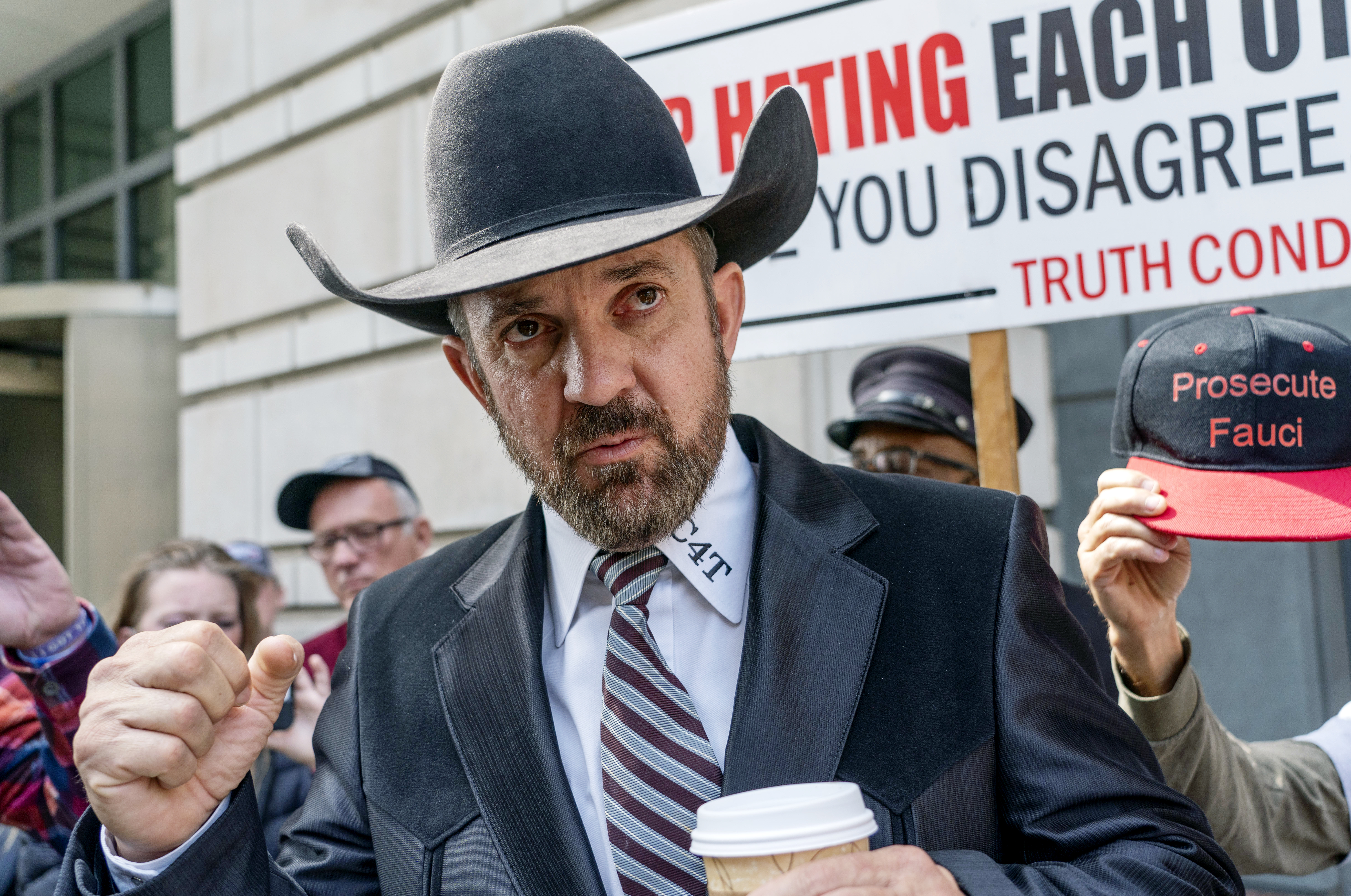 Otero County, N.M., Commissioner Couy Griffin stands outside the federal court after receiving a verdict in his trial on March 22, 2022 in Washington. (AP Photo/Gemunu Amarasinghe, File)