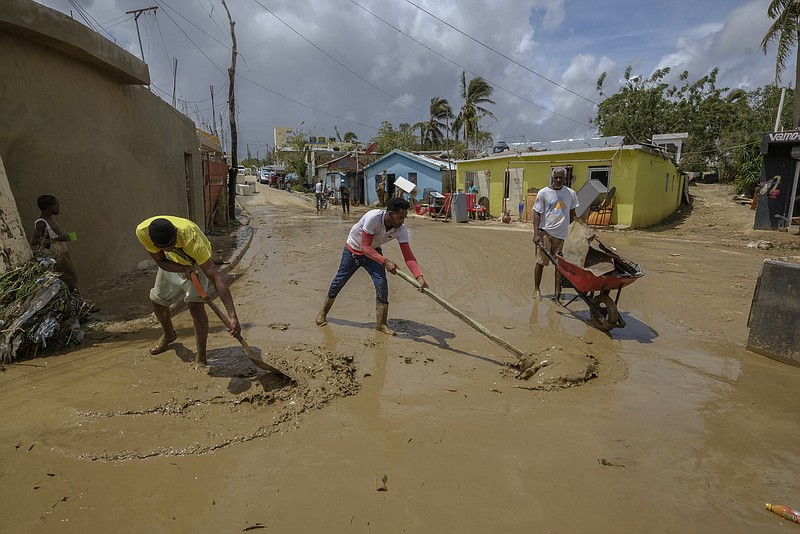 CAYEY, Puerto Rico -- Hurricane Fiona blasted the Turks and Caicos Islands on Tuesday as a Category 3 storm after devastating Puerto Rico, where most people remained without electricity or running water and rescuers used heavy equipment to lift survivors to safety.

The storm's eye passed close to Grand Turk, the small British territory's capital island, Tuesday morning after the government imposed a curfew and urged people to flee flood-prone areas. Storm surge could raise water levels there by as much as 5 to 8 feet above normal, according to the U.S. National Hurricane Center.

While the storm was still lashing the archipelago late Tuesday, officials reported only a handful of downed trees and electric posts and no deaths. However, they noted that telecommunications on Grand Turk were severely affected.

"Fiona definitely has battled us over the last few hours, and we're not out of the thick of it yet," said Akierra Missick, minister of physical planning and infrastructure development.

Late Tuesday afternoon, the storm was centered about 75 miles north of North Caicos Island, with hurricane-force winds extending up to 30 miles from the center.

Premier Washington Missick urged people to evacuate. "Storms are unpredictable," he said in a statement from London, where he had attended the funeral of Queen Elizabeth II. "You must therefore take every precaution to ensure your safety."

Fiona had maximum sustained winds of 125 mph and was moving north-northwest at 8 mph, according to the Hurricane Center, which said the storm was likely to strengthen into a Category 4 hurricane as it approaches Bermuda on Friday.

Rain was still lashing parts of Puerto Rico on Tuesday, where the sounds of people scraping, sweeping and spraying their homes and streets echoed across rural areas as historic floodwaters began to recede.

In the central mountain town of Cayey, where the Plato River burst its banks and the brown torrent of water consumed cars and homes, overturned dressers, beds and large refrigerators lay strewn in people's yards Tuesday.

"Puerto Rico is not prepared for this, or for anything," said Mariangy Hernandez, a 48-year-old housewife, who said she doubted the government would help her community of some 300 in the long term, despite ongoing efforts to clear the streets and restore power. "This is only for a couple of days and later they forget about us."

She and her husband were stuck in line waiting for the National Guard to clear a landslide in their hilly neighborhood.

"Is it open? Is it open?" one driver asked, worried that the road might have been completely closed.

Other drivers asked the National Guard if they could swing by their homes to help cut trees or clear clumps of mud and debris.

The cleanup efforts occurred on the fifth anniversary of Hurricane Maria, which hit as a Category 4 storm in 2017 and knocked out power for a year in parts of Cayey.

Jeannette Soto, a 34-year-old manicurist, worried that it would take a long time for crews to restore power because a landslide swept away the neighborhood's main light post.

"It's the first time this happens," she said of the landslides. "We didn't think the magnitude of the rain was going to be so great."

He said the damage caused by the rain was "catastrophic," especially in the island's central, south and southeast regions.

"The impact caused by the hurricane has been devastating for many people," he said.

Meanwhile, the U.S. Department of Health and Human Services declared a public health emergency on the island and deployed a couple of teams to the U.S. territory.

The broad storm kept dropping copious rain over the Dominican Republic and Puerto Rico, where a 58-year-old man died after police said he was swept away by a river in the central mountain town of Comerio.

Another death was linked to a power blackout -- a 70-year-old man was burned to death after he tried to fill his generator with gasoline while it was running, officials said.

Parts of the island had received more than 25 inches of rain and more was falling Tuesday.

"There were communities that flooded in the storm that didn't flood under Maria," he said, referring to the 2017 hurricane that caused nearly 3,000 deaths. "I've never seen anything like this."

Cruz said 670 people have been rescued in Puerto Rico, including 19 people at a retirement home in Cayey that was in danger of collapsing.

"The rivers broke their banks and blanketed communities," he said.

Some people were rescued via kayaks and boats while others nestled into the giant shovel of a digger and were lifted to higher ground.

He lamented that some people initially refused to leave their homes, but added that he understood why.

"It's human nature," he said. "But when they saw their lives were in danger, they agreed to leave."

The blow from Fiona was made more devastating because Puerto Rico has yet to recover from Hurricane Maria, which destroyed the power grid in 2017. Five years later, more than 3,000 homes on the island are still covered by blue tarps.

U.S. Senate Majority Leader Charles Schumer, D-N.Y., said Tuesday that he would push for the federal government to cover 100% of disaster response costs -- instead of the usual 75% -- as part of an emergency disaster declaration.

"We need to make sure this time Puerto Rico has absolutely everything it needs, as soon as possible, for as long as they need it," he said.

Federal Emergency Management Agency chief Deanne Criswell was expected to travel to Puerto Rico on Tuesday to meet with local officials as the island recovers from significant damage. She will also meet with residents affected by Fiona to gauge the island's most urgent needs.

More federal responders will arrive in the coming days, she added, and power restoration began Monday.

"FEMA is continuing to work with LUMA [Puerto Rico's energy company] to restore power and meet needs for generators," Jean-Pierre said. "In the meantime, President Biden is receiving regular updates on the storm and these emergency efforts. And we will all continue to keep the people of Puerto Rico and all those in the path of the storm in our thoughts."

At a news conference Tuesday -- originally scheduled to mark the five-year anniversary of Hurricane Maria -- several lawmakers recalled how Maria had revealed weaknesses of the infrastructure on the island, many of which had not been properly addressed.

"A year ago, I said that the Puerto Rican power grid was not where it needed to be," Rep. Nydia M. Velazquez, D-N.Y., the first Puerto Rican woman elected to Congress. "And I warned that even a Category 1 [storm] will lead to a collapse of the power grid. And here we are today."

Velazquez and Sen. Robert Menendez, D-N.J., introduced a House resolution Tuesday to honor the more than 3,000 lives lost to Hurricane Maria and reaffirm the U.S. government's commitment to the territory.

"It is our colony and we must act," she said. "That means that we need to do proper oversight to make sure that the people of Puerto Rico are provided with the solutions that will provide the kind of future that they all deserve."

Fiona triggered a blackout when it hit Puerto Rico's southwest corner on Sunday, the anniversary of Hurricane Hugo, which slammed into the island in 1989 as a Category 3 storm.

By Tuesday morning, authorities said they had restored power to nearly 300,000 of the island's 1.47 million customers. Pierluisi warned that it could take days before everyone has electricity.

Water service was cut to more than 760,000 customers -- two-thirds of the total on the island -- because of turbid water at filtration plants or lack of power, officials said.

Fiona was forecast to weaken before running into easternmost Canada over the weekend. It was not expected to threaten the U.S. mainland.

In the Dominican Republic, authorities reported two deaths: a 68-year-old man hit by a falling tree and an 18-year-old girl who was struck by a falling electrical post while riding a motorcycle. The storm forced more than 1,550 people to seek safety in government shelters and left more than 406,500 homes without power.

The hurricane left several highways blocked, and a tourist pier in the town of Miches was badly damaged by high waves. At least four international airports were closed, officials said.

Fiona previously battered the eastern Caribbean, killing one man in the French territory of Guadeloupe when floodwaters washed his home away, officials said. 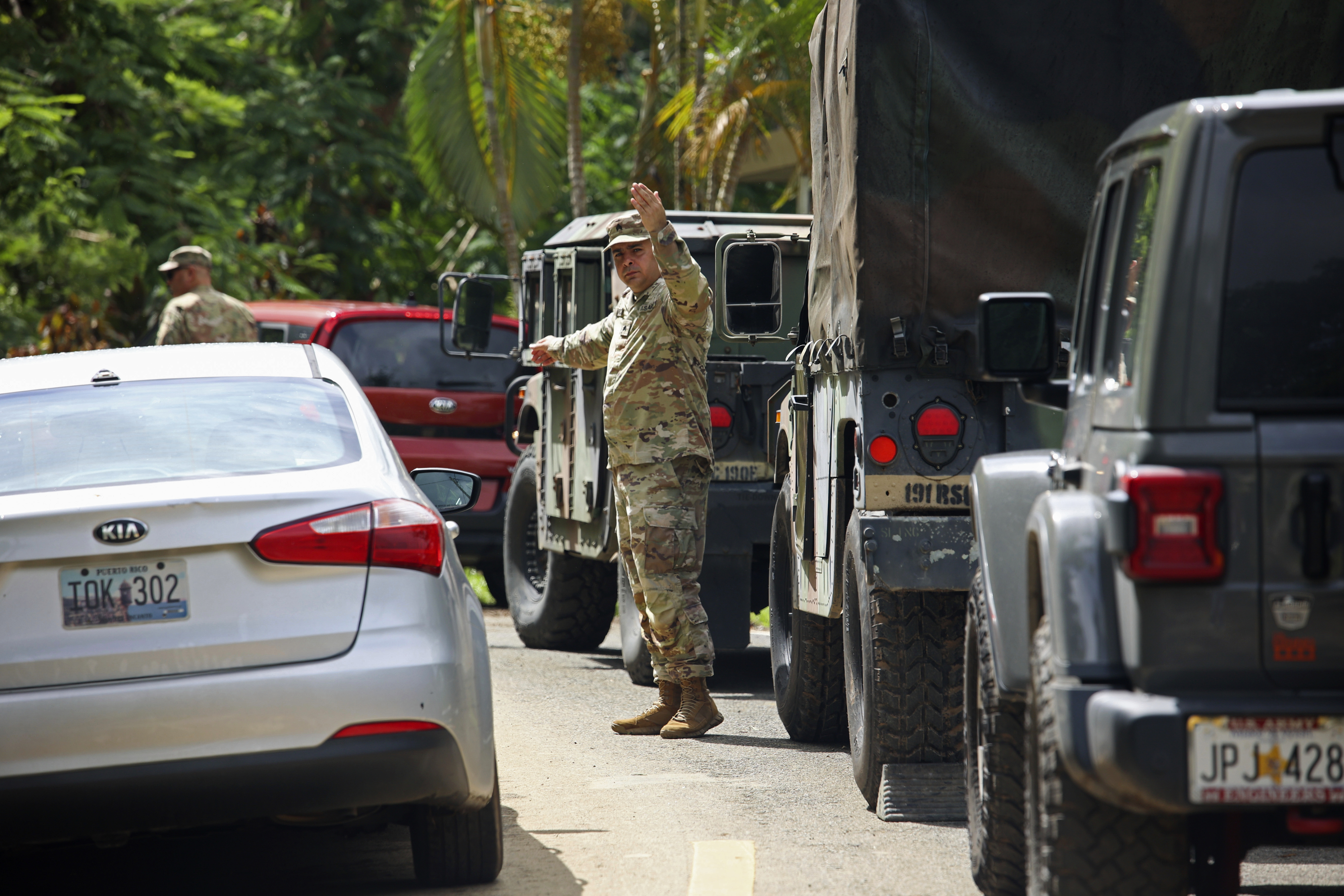 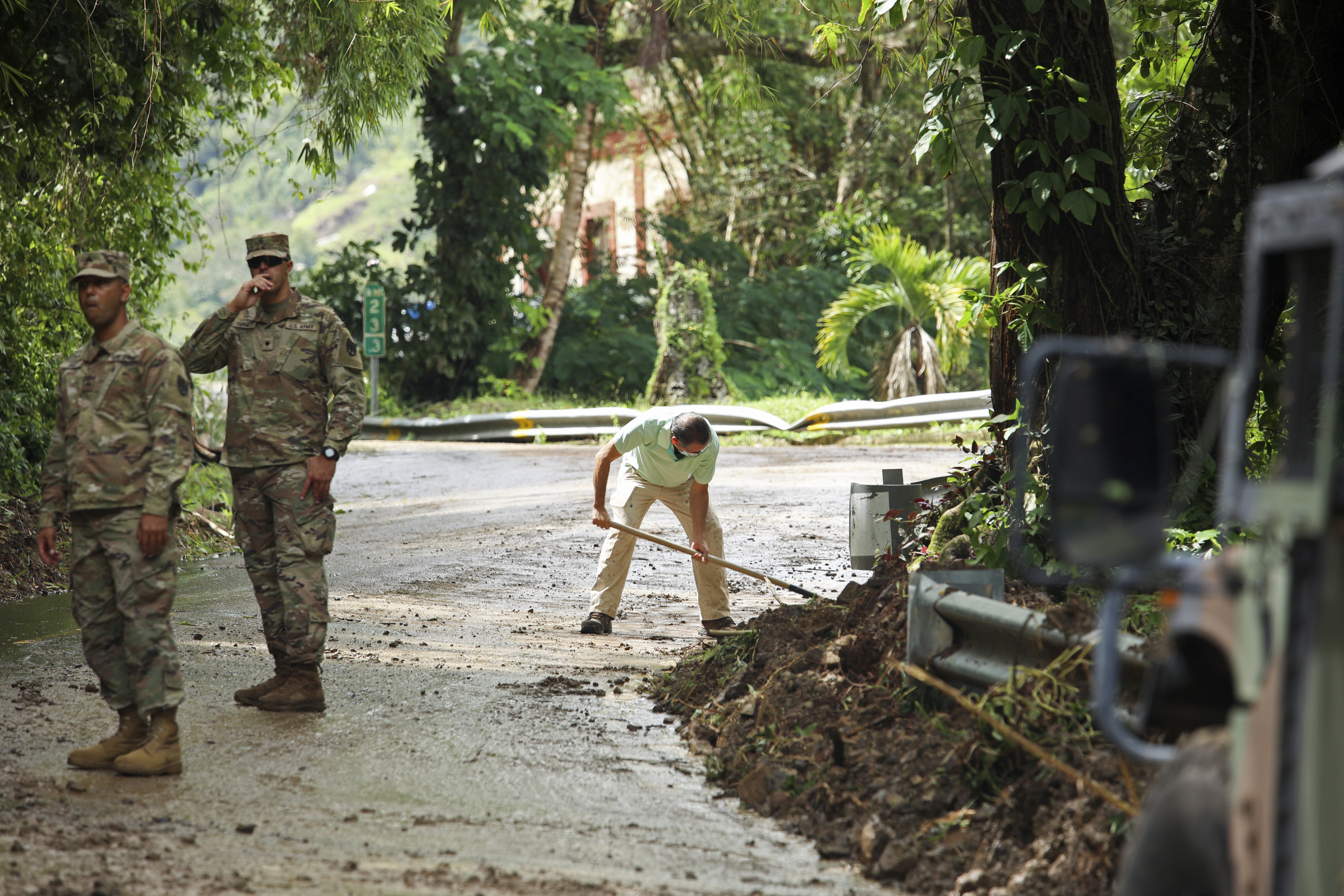 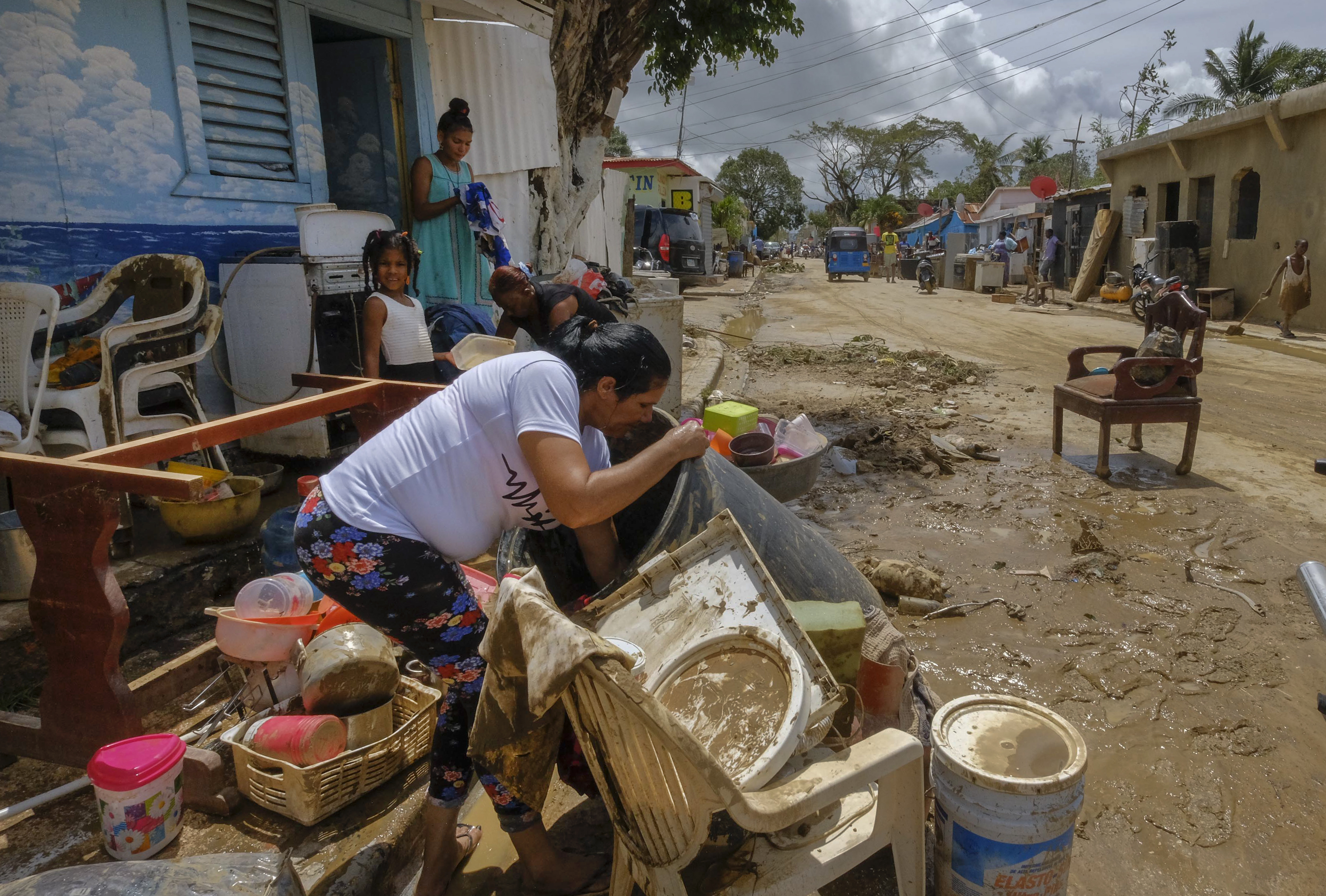 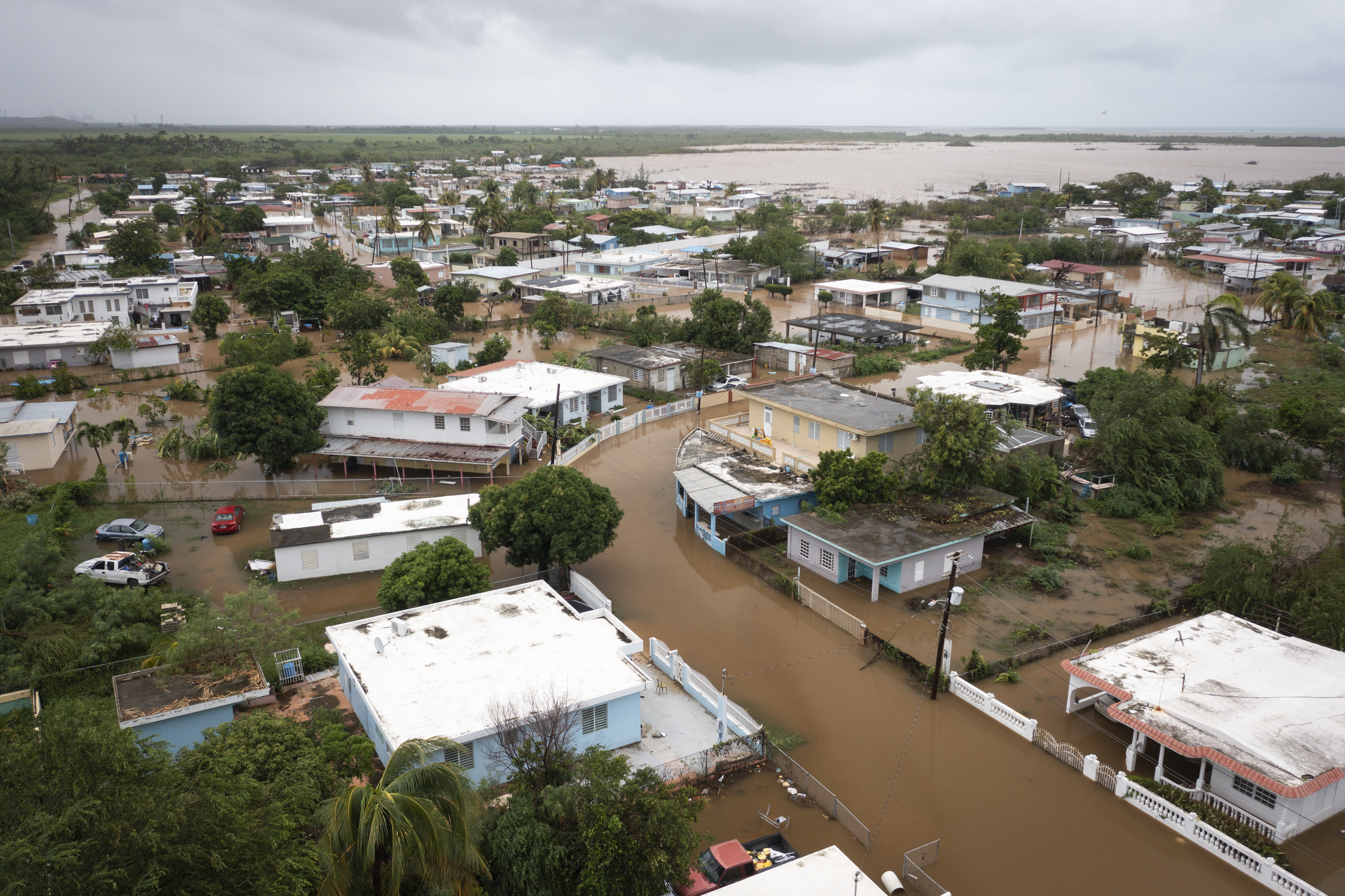 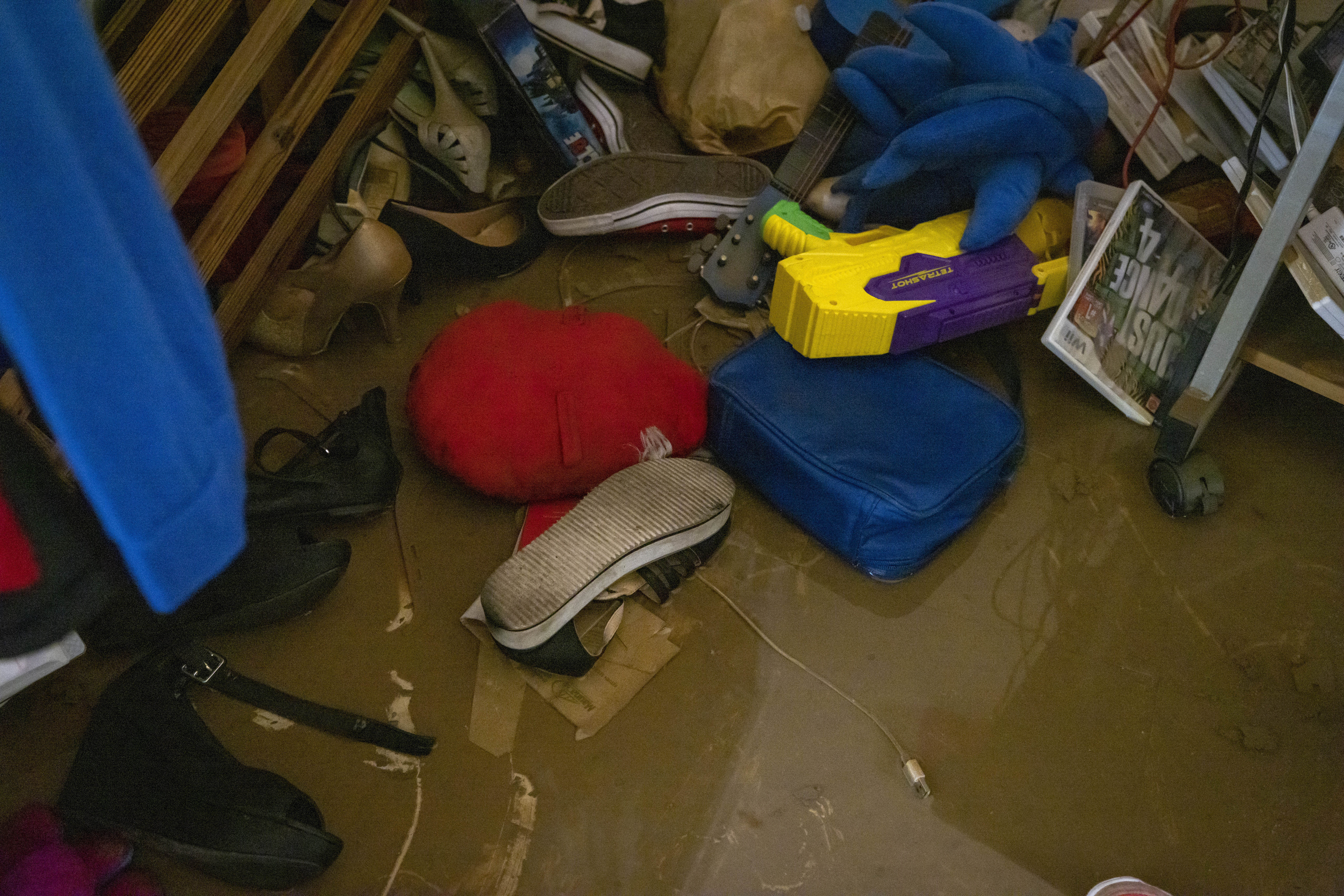 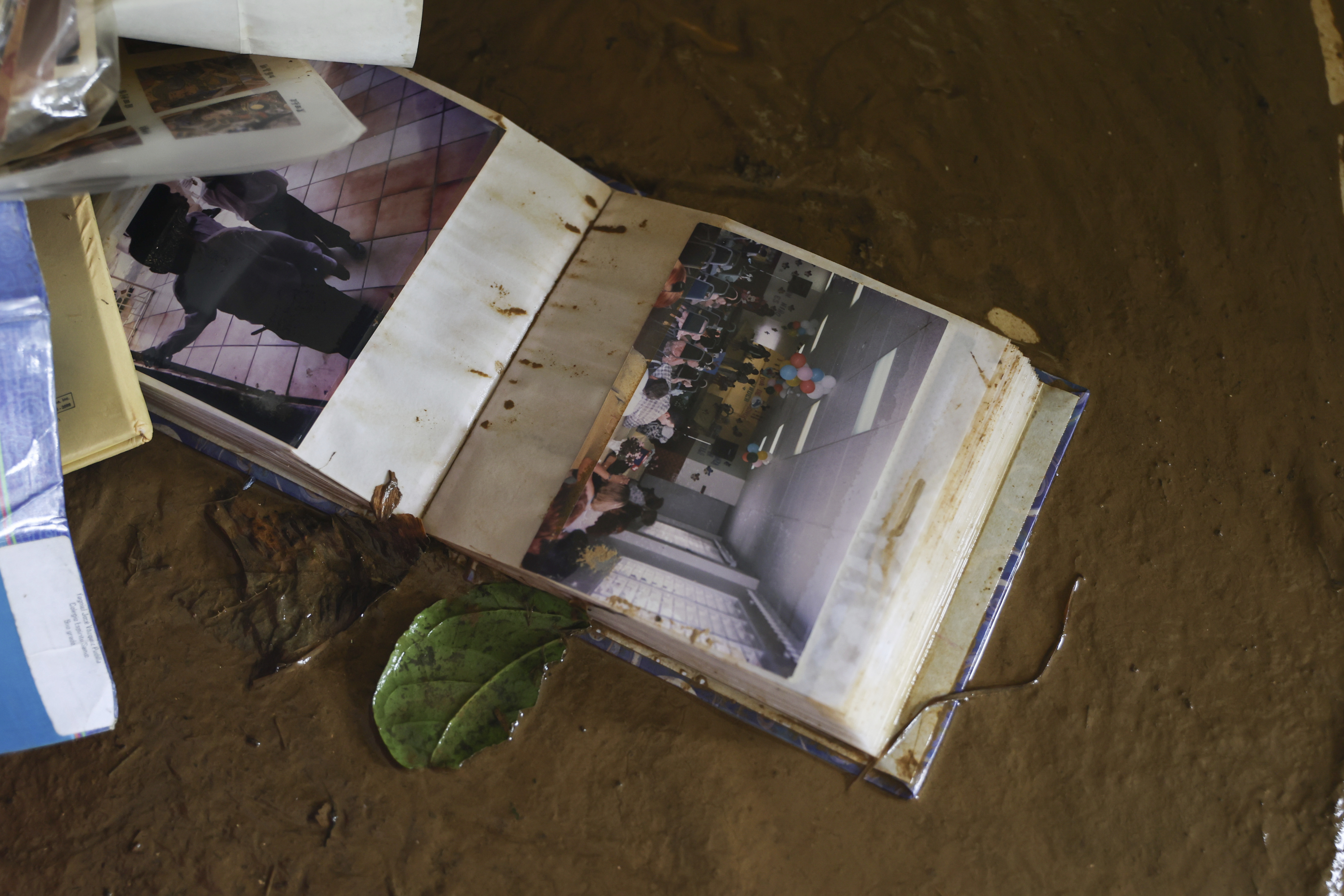 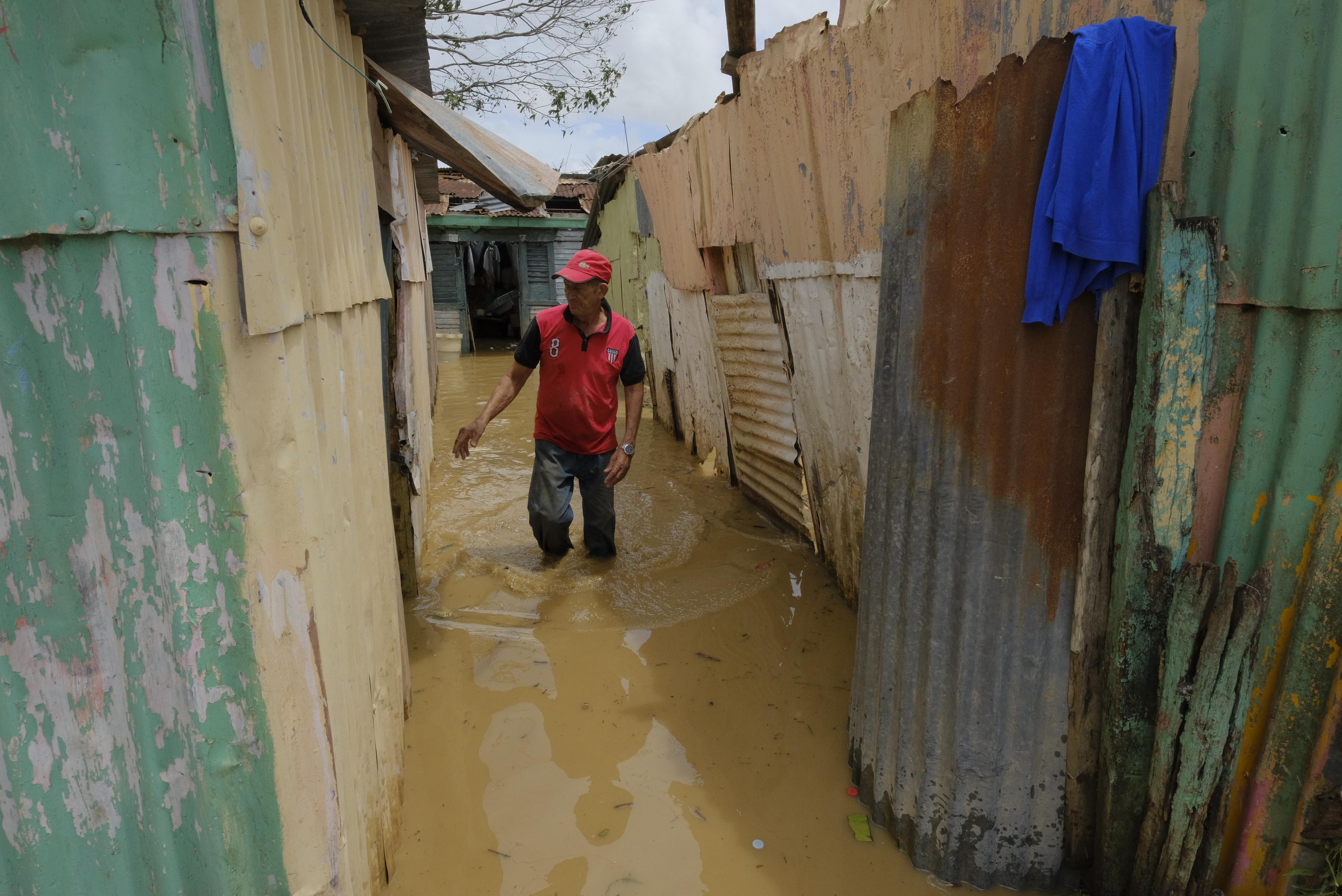 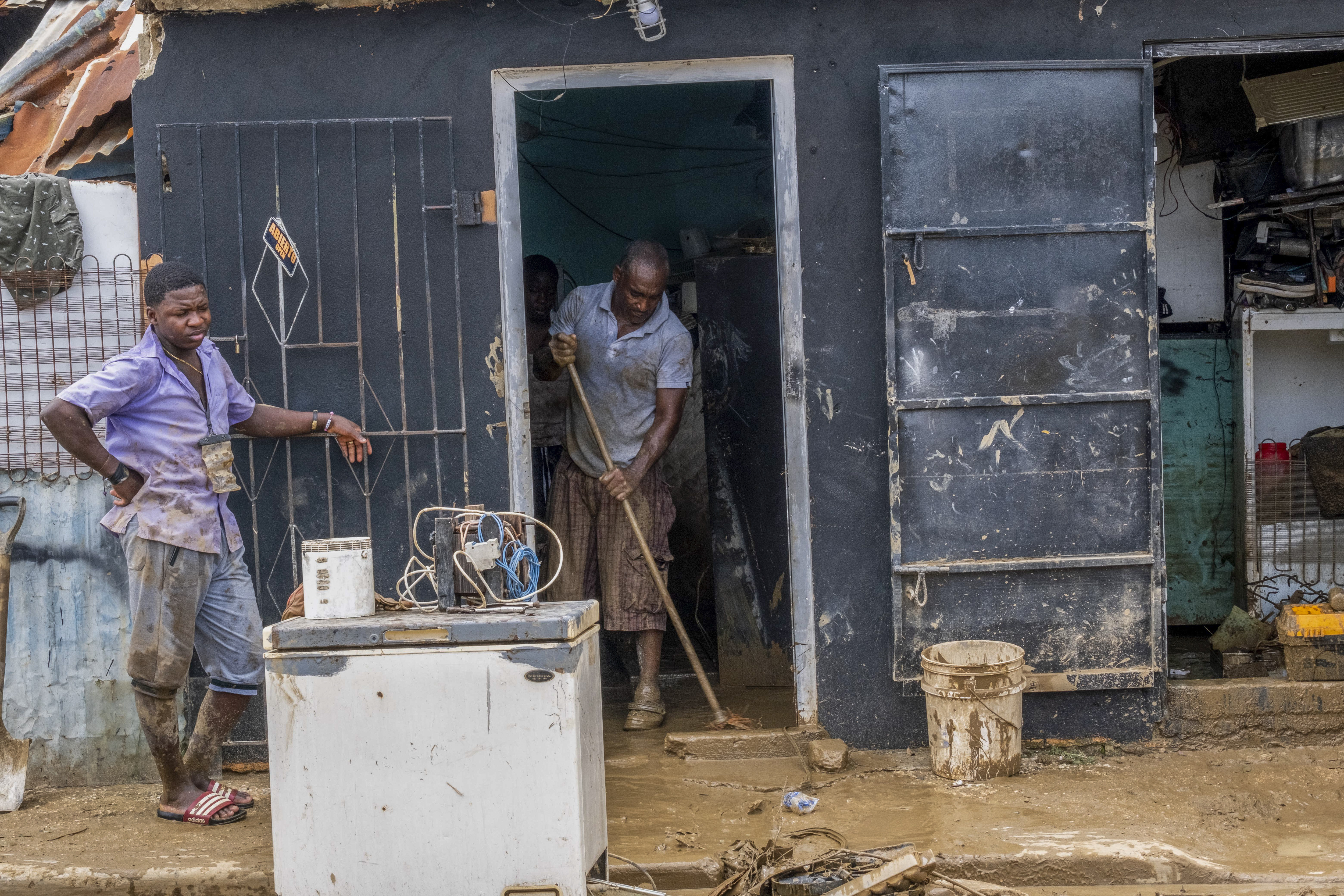 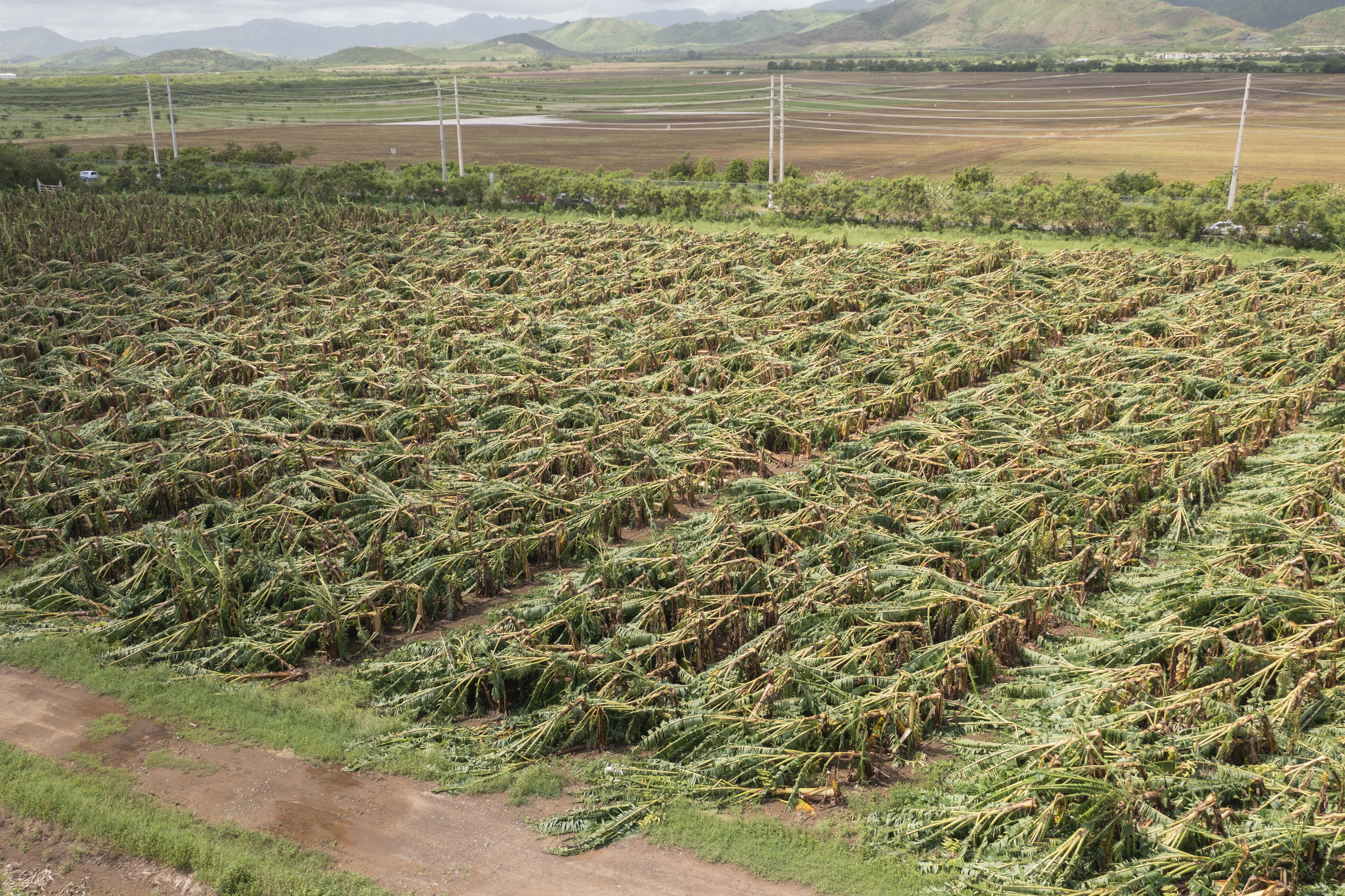