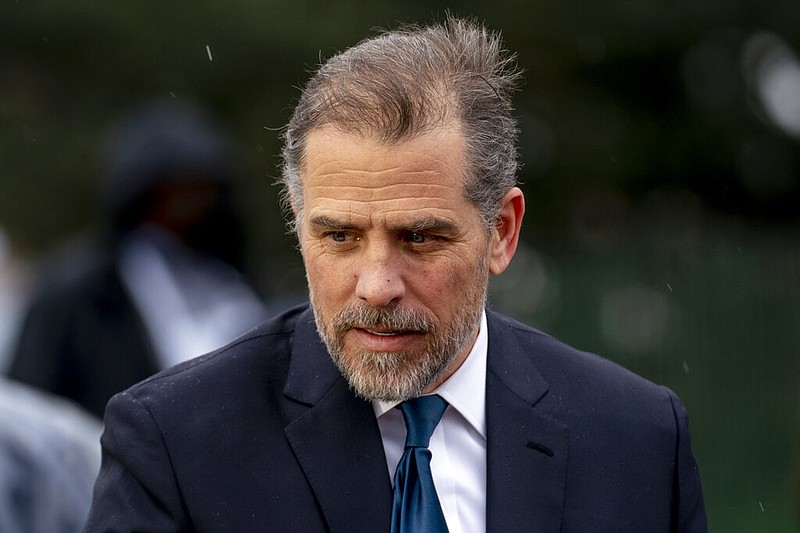 FILE - Hunter Biden, the son of President Joe Biden, speaks to guests during the White House Easter Egg Roll on the South Lawn of the White House, April 18, 2022, in Washington. (AP/Andrew Harnik, File)

Hunter Biden is asking a judge to recalculate his child support payments to an Arkansas woman, citing "a substantial material change" in his "financial circumstances, including but not limited to his income."

As a result, the existing child support calculation "is not in compliance with 'Revised Administrative Order 10,' he alleged, referring to the state's guidelines for child support.

Biden, the son of President Joe Biden, filed his motion to reset child support Monday in Independence County, where the initial paternity action originated and where the child and her mother, Lunden Roberts, reside.

Brent M. Langdon, Biden's Texarkana, Texas, attorney, signed the document. He did not respond to a request for comment left at his office late Tuesday afternoon.

The order setting Biden's existing child support obligations was filed under seal in Independence County on March 12, 2020, in the midst of that year's presidential primaries.

Arkansas' child support guidelines were modified less than four months later; Joe Biden would go on to win the Democratic nomination and, ultimately, the presidency.

"Ultimately, this is going to require us to look deeply, more deeply, into Hunter's finances," Lancaster said. "I'm going to want to have a deposition with Mr. Biden. Like last time, I'm going to bring my forensic accountant to the deposition, unless the judge tells me I can't."

Asked where the depositions would take place, Lancaster said, "Unless he's going to pay me to fly to California to take his deposition, he's going to have to come to Arkansas."

In the past, Biden had presented himself as financially strapped, telling the court in a November 2019 affidavit, "I am unemployed and have had no monthly income since May 2019."

At the time, Biden said he also had "significant debts," due, in part, to obligations arising from a divorce.

A New York Times article shortly thereafter portrayed Biden as living in a $12,000-per-month Los Angeles rental with a swimming pool and a Porsche Panamera in the driveway.

In December 2020, Biden said the U.S. attorney's office in Delaware was investigating him for tax-related matters, saying he was confident that "a professional and objective review of these matters will demonstrate that I handled my affairs legally and appropriately, including with the benefit of professional tax advisers."

Roberts has testified before the federal grand jury in Delaware looking into Biden's finances, Lancaster said.

Soon after his father's inauguration, Biden had a memoir published, titled "Beautiful Things," describing his struggles as an alcoholic and a drug user and his efforts to sober up and begin anew.

It also mentioned the "robust compensation" he had received from a Ukrainian gas company, describing it as "a major enabler during my steepest skid into addiction."

An NBC News analysis found that Hunter Biden and his firm had made about $11 million between 2013 and 2018, with much of it coming from overseas sources. His father was vice president between 2009 and 2017.

After initially denying he was the father of their baby, referred to in court documents by her initials, NJR, Biden eventually agreed to take a paternity test.

It established, "with near scientific certainty," that Biden was the baby's father, Circuit Judge Holly Meyer subsequently noted.

In "Beautiful Things," Biden said he "had no recollection of our encounter," suggesting his substance use had interfered with his memory.

[WEDNESDAY UPDATE: In a written statement sent to the Democrat-Gazette Wednesday, Biden's attorney noted the change in the formula for calculating child support. The motion does not list specific information about Biden's income or assets.

"Effective July 1, 2020, the Arkansas legislature reformed the child support statutory guidelines which apply to this case.  Like many other individuals whose child support obligations were calculated before the new guidelines took effect, Mr. Biden has asked the Court to review the existing child support determination and to establish an amount of child support that complies with the current guidelines and circumstances," Langdon said in a written statement.]