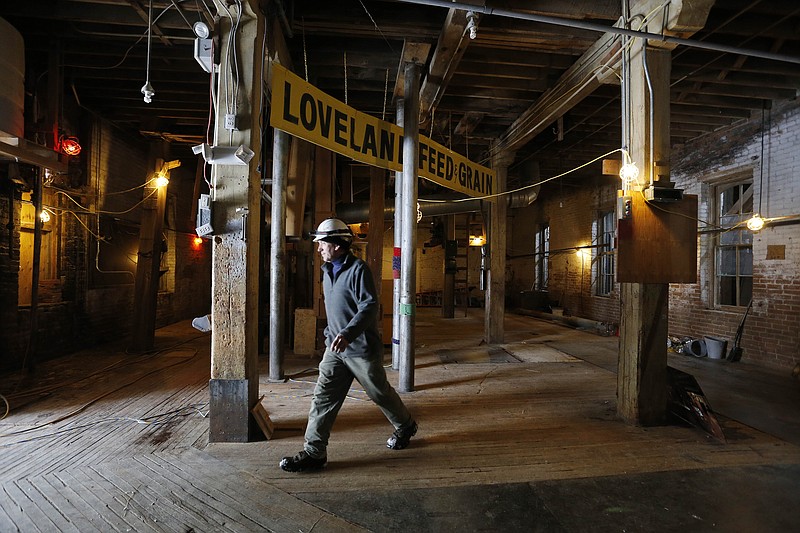 In this March 5, 2015 photo, a carpenter works inside a defunct 19th century mill now being remodeled to house a creative sector business incubator and gallery and performance spaces, in Loveland, Colo. Artspace, the Minneapolis-based organization behind the Loveland project, got its start three decades ago when it turned an early 20th century warehouse in St. Paul into low-income artists’ housing. Its newest projects include an abandoned public school in East Harlem being turned into housing for artists and space for arts organizations. (AP Photo/Brennan Linsley)

Minneapolis-based Artspace Projects on Tuesday announced a plan to build a $36 million mixed-use space for artists to live, create and display their work in east Little Rock.

The impetus for the campus's development came from the Little Rock-based Windgate Foundation's efforts alongside support from civic leaders, arts groups, local artists and creative businesses, according to an Artspace Projects news release.

"While Central Arkansas boasts a network of cultural organizations, public and private support, and enthusiastic patrons, the addition of the Artspace Windgate location will afford new opportunities to our artistic community," Arkansas Museum of Fine Arts Executive Director Victor Ramirez said in the release.

"We are thrilled our city will have specially designed spaces for artists to live and work and look forward to collaboratively building a thriving cultural future," Ramirez said.

The Windgate Foundation is a Little Rock-based private family foundation that aims to advance arts and arts education in the U.S.

Construction on the Artspace Windgate Campus near the city's East Village neighborhood at 1102 E. Eighth Street is scheduled to start this summer and be completed in fall of 2024.

The location, near the Clinton Presidential Center, Arkansas Museum of Fine Arts and the future home of the Arkansas Symphony Orchestra, will serve as an anchor for the city's arts and culture scene, according to Artspace's website.

The 94,000 square foot four-story building will feature 60 apartment units for artists and their families to live in, ten working artist-in-residence studios, event and gallery space, a large outdoor courtyard and approximately 16,000 square feet of commercial space for local arts and cultural organizations.

The artist-in-residence studios are separate from the residential units and are intended to be short-term rentals for local artist in residency programs, Artspace Vice President of Communications & Community Outreach Tio Aiken said Tuesday.

Commercial spaces will have a "creative nonprofit focus," not bars or retail stores, he said.

There will be murals on the outside of the building and sculptural components in the outdoor courtyard along College Street.

There will also be a rooftop deck with views of downtown.

The housing units will be affordable for residents who earn between 30% and 60% of the area median income.

Rental rates will be set by the U.S. Department of Housing and Urban Development (HUD) and updated in April each year, Aiken said.

The most recent U.S. census conducted in 2020 sets the median household income for Little Rock at $53,620 and the median rent at $889 per month.

AMR Architects is designing the project.

"I am excited to have the Artspace Windgate Campus located in the East Village area of Little Rock's historic East End," Little Rock Mayor Frank Scott, Jr., said. "This innovative project will bring not only bring additional affordable housing to this area, but serve as a neighborhood hub ... it will be an anchor for Little Rock's expanding arts and culture scene. When we look at what makes cities great, it is a combination of affordable housing, economic opportunity, and exciting quality of life. The Artspace Windgate Campus provides all three. The impact of this project will be felt in the immediate neighborhood and beyond our city limits."

Artspace Projects also plans to expand its footprint into Northwest Arkansas with a $16 million residential project in Bentonville called the SOMO Artspace Lofts, which will be the organization's second project in the state.

The more than 55,000 square foot Artspace Lofts project will be built on S.E. Eighth Street and feature 50 residential units and approximately 1,600 square feet of community and gallery space.

Monthly rent for the apartments at the Lofts will set to be affordable for those earning 60% of below the area median income.

Artspace Projects is partnering with The Momentary and Crystal Bridges Museum of American Art on the project. The architect for the Lofts project is Kevin Daly Architects and the general contractor is Flintco.

Artspace began exploring building and living and work space for artists in Little Rock in 2018.

Artspace Projects Inc. officials held a public meeting with Little Rock city leaders, local artists and entrepreneurs in 2019 to discuss whether Little Rock would be a good starting point for an Artspace development.

The group said at the time that it could take three to five years to develop a project.

Little Rock has offered living space for artists before.

Little Rock officials designated the historic Kramer School building on Sherman Street as live-work spaces for artists in 1997 but the building was sold to a private firm in 2015.

Before the sale, news coverage detailed claims tenants were living in substandard conditions.

Artspace Projects is a real estate development nonprofit organization that works to create affordable spaces for artists to live and work, as well as space for arts and cultural organizations, and arts-friendly businesses.

In the South, Artspace has developed projects in Tennessee, Louisiana, Texas and Florida.