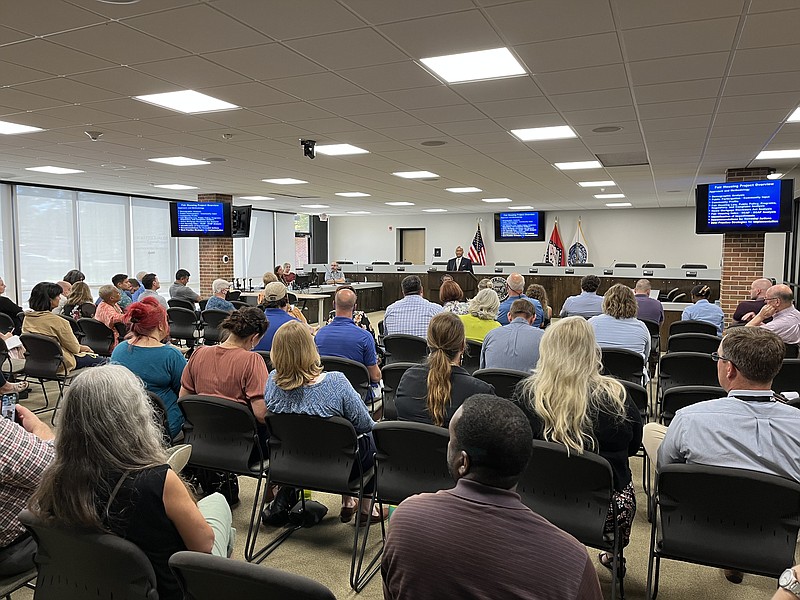 James Gilleylen, president and chief executive officer of Plano, Texas-based firm J-Quad Planning Group, speaks Tuesday morning in Rogers City Hall at a public meeting about fair housing in the city. The city is conducting an analysis of impediments to fair housing, a requirement for all cities receiving funds through the U.S. Department of Housing and Urban Development's Community Development Block Grant program. (Garrett Moore/NWA Democrat-Gazette)

The city is conducting a study of impediments to fair housing.

The city has contracted J-Quad to produce the study, which will be completed by the end of the year. It will be used to create a five-year plan for the city's community development block grant program, according to Johnston.

Representatives of local organizations spoke at the meeting about housing prices, child care, transportation and other needs they see in the community.

Kim Koyote with The Salvation Army of Northwest Arkansas said the nonprofit's shelters are remaining full as she has seen families displaced because of rental costs.

"There's not enough housing for the moderate- to low-income person to be rehoused in," Koyote said. "We have a lot of people who are not housed and have no place to go and no housing to put them in."

Jessica Minton with the Department of Veterans Affairs said lack of available housing -- especially low-barrier dwellings that accept tenants with a criminal record -- is the primary impediment to fair housing that she sees for veterans in the area.

Gale Lohr with the Benton County Department of Human Services said lack of housing for low-income families creates a secondary problem of child maltreatment. She said family support networks are important, including services like child care and transportation.

All cities participating in the block grant program, managed by the U.S. Department of Housing and Urban Development, are required to conduct an analysis of barriers to housing choice at least every five years.

They also must certify they are furthering fair housing by taking action and submitting records of actions taken, according to Gilleylen.

The goal of the fair housing assessment is to provide data that will help community members, organizations and lawmakers identify needs and plan appropriate responses.

Federal funding for community development projects is limited, so the city will have to prioritize realistic solutions, Gilleylen said.

"This project isn't intended to cure all of our problems as a community," he said. "Don't become frustrated because of the enormous issues we face. Let's focus on the bite-sized pieces that we are going to be able to carve out."

Fair housing, according to the federal housing department's Office of Fair Housing and Equal Opportunity, involves the elimination of housing discrimination, the promotion of economic opportunity and the achievement of diverse, inclusive communities.

The distinction between violations of fair housing law and impediments to fair housing choice is central to the assessment of any community's housing needs, Gilleylen said at Tuesday's meeting.

Violations of the federal Fair Housing Act involve discriminatory practices related to housing. Enacted in 1968 and amended in 1974 and 1988, the law bans discrimination in the sale, rental and financing of dwelling-related transactions based on race, color, religion, sex, disability, familial status and national origin.

The median price for single-family homes in Northwest Arkansas hit $350,000 April through June, up 31.9% from where that price was at the end of the second quarter of 2021, according to the National Association of Realtors quarterly report.

Affordable housing is generally defined as housing on which the occupant is paying no more than 30% of gross income for housing costs, including utilities, according to the federal housing department.

Factoring in both housing and transportation costs better represents true housing affordability, according to the Center for Neighborhood Technology in Chicago.

Housing-plus-transportation costs compared to income averages 53% in Rogers, 27% for housing and 26% for transportation, according to the center's "H+T Affordability" index.

Eighty-four percent of the city's residents spend more than 45% of their household income on housing and transportation.

The city can ensure it has ordinances to allow affordable housing developments, but it can't buy land and build and sell affordable homes or force developers to build affordable dwellings, Johnston said.

Most of the city's block grant funds are typically designated for housing rehabilitation projects for low-income home owners. Several broken heating, ventilation and air conditioning units have been replaced in homes this summer through the program, she said.

The program also helps pay for after-school and summer programs at the Boys & Girls Club.

Through the contributions, parents save money on child care, another costly item for families, according to Johnston.

"Child care's a very expensive thing. If you're making minimum wage, it can be hard to justify working."

Lack of transportation is also a common challenge for low-income, disabled and elderly residents in the city, Johnston said.

Transportation to counseling sessions is essential for formerly incarcerated residents and those recovering from substance abuse, she said. Transportation is also vital for low-income families, especially single parents, who need to get to work and drop off their children each morning, she said.

Transportation costs in Rogers -- including auto ownership, auto use and public transit costs -- average 26% compared to income, according to The Center for Neighborhood Technology.

Contributions to these local organizations through the program are limited, because the city is only allowed to use up to 15% of its block grant funds on services, per a cap imposed by the federal agency. The rest must be used for housing rehabilitation, public facilities and administrative costs.

Community leaders and organizations will have to work together and play a major role in these issues, Johnston and Gilleylen agree.

Diversifying housing with affordable options has been a design and development principle included in the process of updating the city of Springdale's Downtown Master Plan this year.

Bentonville's City Council set up the Housing Affordability Workgroup in November to review housing needs, availability and affordability. In July, the group presented progress in mapping possible actions to make multifamily and single-family, owner-occupied dwellings accessible to three tiers of household income levels: up to $40,000, up to $60,000 and up to $100,000.

Samaritan Community Center in Rogers is one example of a nonprofit looking to cut residents' transportation costs.

A hub for local organizations to meet with the center's clients is a part of plans for the organization's new building, which is under construction at at the corner of South Eighth Street and West Laurel Avenue.

The center hopes to be a gathering point for as many as 60 partnering organizations and providers, Debbie Rambo, the center's executive director, said in May.

"Collaboration between nonprofits is a key thing," Johnston said. "When you work hand in hand, you can stretch your money and do a lot more with it."

In August, the federal housing department approved the city of Rogers’ 2022 Action Plan detailing which projects and organizations will receive funds from the city through the program for the program year 2022, according to Donna Johnston.

The plan allocates $469,130, all the block grant funds, in ways that will provide facility help for local nonprofits, public services and emergency housing rehabilitation for low-income residents, Johnston said.

About 14,425 individuals will benefit from the funds, according to the plan.