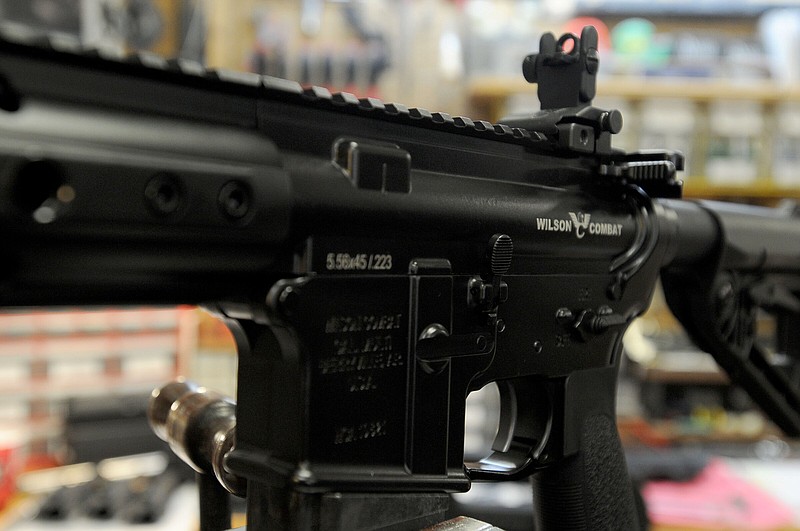 Because of its versatility, utility and popularity, the AR-style rifle is embedded in the American hunting culture. The gun’s adaptability has helped it morph into the modern sporting rifle. (Democrat-Gazette file photo)

Because of its versatility, utility and popularity, the AR-style rifle is inexorably embedded in the American hunting culture.

So ubiquitous is this style of rifle that it is outpacing its perjorative reputation in popular culture. Terms such as "tactical-style" rifle and "AR-style" rifle are becoming obsolete. The Associated Press Stylebook, journalism's bible, proscribes the use of "assault rifle," its socio-political descriptor. In their places has emerged a new term, "modern sporting rifle."

Bill Pool, owner of Arkansas Gun Traders in Benton, is a traditional rifleman. An accomplished competitive shooter, he is also an avid prairie dog hunter. He prefers to build his own rifles using custom barrels that are firmly bedded into laminated stocks or high-quality composite stocks that provide the rigidity and stability. These attributes are essential to achieving pinpoint accuracy.

That certainly does not describe a modern sporting rifle stock. It is so light and flexible that you can bend it against your knee.

However, modern sporting rifles are chambered primarily for 5.56 x 45 NATO or its near twin, 223 Remington. The 223 Rem. is very popular among target shooters and varmint hunters.

Hunting prairie dogs requires shooting a heavy rifle from a rest in a stationary position. We don't have prairie dogs east of the Mississippi River. Hunters in this region hunt other varmints, namely coyotes and feral pigs. They are also becoming the predominant quarry also in the West, where it's increasingly difficult to get access to private land. In some states, like Colorado, it is illegal to hunt prairie dogs on public land.

For the new style of varmint hunting, the modern sporting rifle is made to order.

"A lot of guys buy sporters because they walk a lot," Pool said. "You're just going to get a few shots. A lot of those guys buy a varmint caliber, but they don't buy a true varmint gun."

The modern sporting rifle, a rifle built on a modular AR-15 frame, follows the trend of popularity that has existed since World War I when the returning servicemen gravitated to bolt-action rifles. Jim Eddie, an associate of The Shootin' Den in Colorado Springs, Colo., said the modern sporting rifle is the preferred platform for veterans that have served in nearly 30 years of continuous warfare.

"Of the newer shooters, the 40-and-under category, that's what they carried," Eddie said. "That's what they're used to. It's not a bad platform. A lot of the guys that came back had sniping backgrounds in the Middle East. That's what they like."

Adaptability is the reason the AR-15 morphed into the modern sporting rifle. Simply by switching upper units, you can convert a 5.56 x 45 into almost any caliber you want. You can use a 308 Winchester upper for deer hunting, 300 Blackout for pigs, or 450 SOCOM for black bear.

"Most of the people are going to the AR platforms more than anything else is because so much is available for it, and they can make it any way they want," Eddie said. "You can change the upper to a 24-inch barrel or a 20-inch. The flexibility and modularity of the AR platform makes it really easy. You don't have to buy 20 rifles."

As hunters demand higher performance, makers of AR upper units are improving the quality of their barrels. The AR chambered in 5.56 x 45 was always accurate enough to hit a human silhouette target at 500 meters, but now they are almost accurate enough to hit prairie dogs. However, the AR has inherent limitations that preclude it from being a first-call prairie dog rifle, Pool said.

"Nearly all varmint shooters are handloaders," Pool said. "Have you ever tried to find your brass shooting a semiautomatic?"

Pool said that he and his companions look for clean places to park, and they often remove the ejectors from their bolt-action rifles to keep them from flinging spent cartridge brass into high grass.

"An AR throws it 10 to 15 feet in the sagebrush, and you'll play hell finding half of it," Pool said.

Also, reloading ammo for use in a semiautomatic rifle is tricky, Pool said. You can load cartridges with a wide range of powder charges for a bolt action rifle. A semiautomatic rifle uses excess gas from propellant discharge to slam the bolt backward to re-cock the firing pin, eject a spent case and chamber a fresh cartridge.

"A gas gun operates with certain amount of gas," Pool said. "Any higher pressure or lower pressure, and it won't function. It limits you greatly on what your handloads can be.

"That magazine hangs down a long way," Pool said.

The ability to shoot a lot of ammunition quickly is also incompatible with prairie dog hunting, Pool said.

"We shoot nothing but single-shot guns," Pool said. "There are a couple that shoot repeater actions, but they make single-shots out of them because it slows you down enough in a busy prairie dog town so you don't burn the throat out. We've got a guy that brings out an AR and shoots with us. He's a pretty good shot, but he doesn't hit half of what we hit. When he brings a bolt gun, he does real well with it."

Matt Harnes, owner of Teton River Traders Gun Shop in Fort Pierre, S.D., said that he doesn't believe a bolt gun is more accurate than an AR. He said that most people avoid modern sporting rifles for high-volume shooting because they lack the self-control to lay off the trigger. Ammo is expensive, and you can shoot a lot very quickly with an AR.

"A lot of guys figured out they have self-control problems, and they burn up their ammo pretty quick," Harnes said. "We see lot of guys go back to bolt rifles, but not for accuracy. A bolt [gun] is not going outshoot an AR and vice versa. Almost all of them shoot very well."

Harnes, an AR enthusiast, describes himself as a Rock River Arms 'fanboy." He started shooting Rock River Arms 20 years ago because of their accuracy, but he said the rest of the industry has closed the gap.

"I always shot half and three-quarter inch, but now everything does," Harnes said.

Equipped with a sound suppressor, a modern sporting rifle can be very effective for killing a large number of feral pigs in a short time. Mother Jones, a bastion of progressive political dogma, even put its stamp of approval on the AR-15 for this purpose in a 2013 article by Tim Murphy titled, "Bringing Home the Bacon -- With an AR-15."