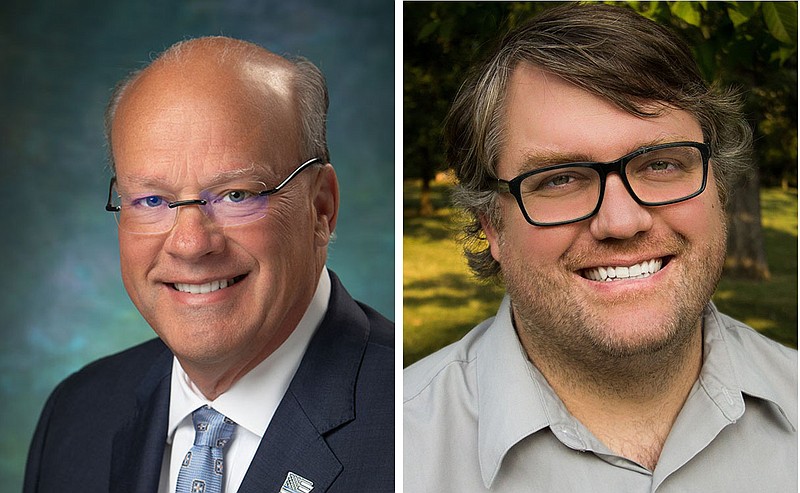 FAYETTEVILLE -- A funeral home owner is challenging a mathematics instructor for his seat on the City Council.

Scott Berna filed to run against Sloan Scroggin for the Ward 3, Position 1 seat. Scroggin has served in the position since 2019.

Early voting begins Oct. 24. The general election is Nov. 8. Only residents who live in the ward can vote to elect its council members. Fayetteville municipal elections are nonpartisan.

Berna said he believes the city's No. 1 responsibility is to keep residents safe. The Police Department has struggled to hire enough officers recently, and council members need to find creative ways to keep staffing adequate, he said.

"I'm a funeral director. I'm not a police chief," Berna said. "I don't know what those levels are, so I need to rely on the professionals who know what that is and rely on that."

Berna said he would approach a position on the City Council as he does his own business, by separating the city's needs from its wants and prioritizing the budget accordingly.

The issue of affordable housing is a tough nut to crack, Berna said. Developers and property owners have a right to build on their land, and neighborhoods should be protected from negative impacts associated with new development, he said.

"Infill -- that's the buzz word everybody uses right now," Berna said. "I think I would have to look at every project individually to say 'Does it fit?' I don't think we need to rubber stamp anything just because it falls within a criteria we have on the books that says 'This is what you're supposed to do.'"

Scroggin said one of the biggest issues facing the city and many parts of the United States is the rising cost of housing and construction material. New development in neighborhoods should be contextual to existing structures, he said.

Flooding is becoming more frequent, both in areas with new development and those without, Scroggin said. The city needs to adopt better stormwater techniques, and the council should encourage more deliberate development practices, such as planned zoning districts, he said.

Scroggin said he makes decisions based on what is best for the city.

"I think I have a pretty good history on finding common ground," he said.

Scroggin said he wants to explore more workforce training programs for residents, especially considering the toll inflation has taken on incomes. Additionally, the city has been creating more parks and trails, which is good, but there needs to be a long-term plan for maintenance needs, he said.

Scroggin has advocated for more police to patrol trails and intends to continue pushing the issue.

"I've seen people who will walk loops in Walmart parking lots instead of our trails because they don't feel safe," he said.