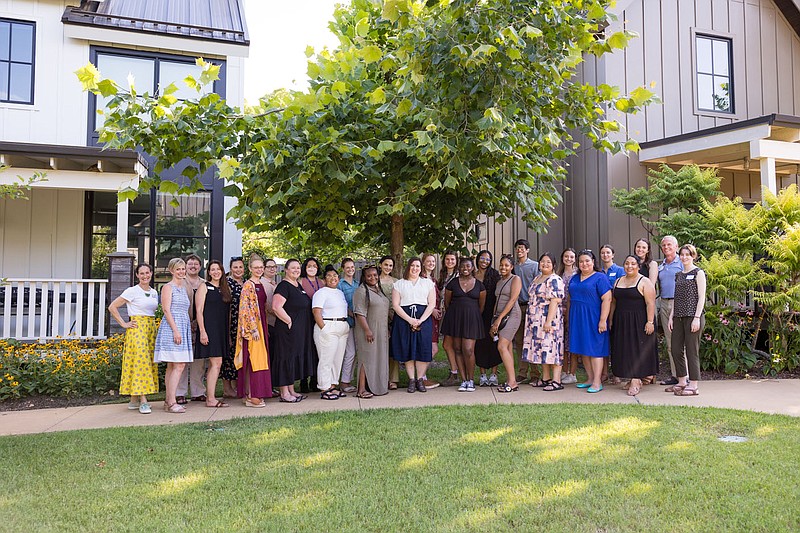 The Art Bridges team began forming in 2017 with five employees and grew to 20 during the pandemic. That staff looks for artworks that have a good assortment of gender diversity, racial or demographic identity, just as much as scale, medium and other typical criteria that goes into art acquisition processes, for loan to partner institutions. (Courtesy Photo/Stephen Ironside)

Right now, all across America, works of art languish, collecting dust in the basements and vaults of museums everywhere, waiting to be seen.

What happens when a museum has a renovation and needs to store its treasured pieces for months or even longer? What happens when an artist of import dies and leaves a surplus of beautiful works behind? Should they continue to wait for their turn on walls and pedestals, or is there an alternate life for them in the meantime?

Art Bridges, a nonprofit organization funded by Alice Walton, has the answers in its collection loan partnership, which launched its pilot phase in June 2021. It started rolling out otherwise unused artworks in late September to partners around the country, so in the past few weeks, works have been arriving at their new, temporary homes.

"A lot of it is to get works out of storage and into the community," says Gabriel Ford, director of marketing and communications for Art Bridges. "To fill permanent collections and just (help) some smaller, regional institutions get art we acquire."

Right now the partnership includes a total of four lenders -- Joslyn Art Museum in Omaha, Los Angeles County Museum of Art, Crystal Bridges Museum of American Art and Art Bridges, which has its own collection.

Nine museums are currently borrowing partners. With each borrower getting 10-15 works at a time, that means arranging to send well over 100 precious items to trusted locations. Organizers hope to expand the program to have seven more partners in the coming year. And two additional lenders -- the American Folk Art Museum in New York and the Cleveland Museum of Art in Ohio -- are expected to come on board in the next few months.

"It's a significant long-term loan," says Jamie Grandinetti, director of collection loans and exhibitions. "They have to keep (the items) for a year so they can do extensive learning and public outreach and have more exposure to the public through artwork."

The pilot phase of the Art Bridges Collection Loan Program offers 170 works of art, Ford says, by 136 artists such as Mickalene Thomas, Mary Cassatt, Dolores Guerrero-Cruz and Kehinde Wiley, and it includes paintings, lithographs, photographs, sculpture and video. Many items will travel to an additional stop before returning to the lender.

What makes a compelling case for connecting with a new museum partner is lack of access to a large acquisition budget and a desire to diversify gallery walls to ensure more people of color and of all genders are represented and welcomed through programming, Grandinetti says.

"It's hard to make those shifts if you don't have money to buy and change the assortment," she says. The Art Bridges team began forming in 2017 with five employees and grew to 20 during the pandemic. That staff looks for artworks that have a good assortment of gender diversity, racial or demographic identity, just as much as scale, medium and other typical criteria that goes into art acquisition processes.

But really, the challenges to museums lending and borrowing come from all sides.

The artworks might have institutional barriers that prevent them from getting out on loan. From the lender side, they might not have the manpower to handle outgoing requests that take additional time for crating, packing, documentation and the financial cost.

Peoria Riverfront Museum in Peoria, Ill., is one of Art Bridges' borrowing institutions that has been participating in the exchange the longest. Bill Conger, chief curator at Peoria, says the connection was established through a mutual friend.

"About four years ago, we were alerted that Crystal Bridges Museum had established a foundation," Conger said by Zoom. Its "charge was to release works throughout the country in most major museums in America and provide works that mid-size cities could exhibit and expose our populace to -- and tell the story of art we never could before."

Peoria reached out shortly before the pandemic and soon had "Vantage Points," an exhibition with contemporary photography from the Whitney Museum of Art that Art Bridges was able to sponsor and get on the road.

Now, Conger says, they're five projects in. Among those five were "American Verses" with Terry Adkins and Kerry James Marshall. They displayed the simple works from the Art Bridges collection in a small project space and added educational programming around the exhibit.

"One of my most favorite things when Bill reaches out to get a new collection or new piece is to get creative about how we're going to engage the public and audience to communicate through these pieces of art," says Everley Davis, museum educator and student engagement coordinator for Peoria Riverfront Museum.

To engage more teenagers in the exhibit despite the pandemic, Davis organized a virtual performing arts festival with hip hop, spoken word, poetry, rap music and various other performances. It came with activities for teachers to access in their classrooms -- which continued to be available long after the event -- and concluded with a free, live performance for all. A local musician wrote three original songs, one for each work of art.

The museum called the new engagements the Dark Tower Hour events, a play off the title of the "Dark Tower Daughter" of Madame CJ Walker.

Peoria currently has "Bronzeville," a painting from 1949 of the African American area of Chicago, symbolic of the First Great Migration of the early 20th century, when Black southerners relocated to northern and Midwestern cities. The museum plans to display it for a year, supplementing an existing exhibition of welded steel buildings by sculptor Preston Jackson, former chairman of the Chicago Art Institute. Jackson's work re-creates all the cities important to the migration: Chicago, New York City, Bronzeville, Harlem, all within one room.

"This was specifically inviting the Black community to come into the museum," Davis says. In the first Dark Tower Hour, a Peoria-born jazz musician who had toured worldwide returned to play music from the same era as the exhibit. In the second event, St. Louis-based Brandon Alexander Williams spoke to the literary connections and the Harlem Renaissance.

This summer, Peoria opened "American Revolutionaries: Art & Disruption," also from the Art Bridges collection, which spans 160 years of American art. The pieces were chosen to tell an overarching story, how artists responded to each other and transformed American art over time.

"This kind of art historical exhibition is really about teaching the underserved stories of artists, some well known and some not, in a story of America," Conger says.

Peoria Riverfront most recently opened "Andy Warhol: Endangered Species," which features 10 endangered animals in Warhol's pop style as a response to ongoing ecological concerns and the impact of human destruction of animals and the environment, according to the Art Bridges website. It opened in late September and will be on view there for the next few months.

"Teams led by designers will create an original garment inspired by an animal featured in the exhibit," she says. Peoria is also teaming up with a local organization to provide animal education surrounding conservation efforts and to help folks learn about Illinois biodiversity.

Davis hopes the success of the first two Dark Tower Hours will continue in the next one, given a combination of having performances outside and experiencing the exhibit together as a group inside the museum.

"The first (event) had over 200 people here and just all of us were going into the gallery to experience it together," she says. "You don't see that on the average day. The discussion was really beautiful to see."

The Museum of Fine Arts St. Petersburg in Florida is a relatively new borrowing partner that in August received 11 works from the Joslyn Art Museum while the Joslyn undergoes a renovation.

"We're very fortunate to be the recipient of these wonderful loans," says Anne-Marie Russell, interim executive director for the MFA St. Pete. Unlike some of the loans, the pieces in this collection are the larger mainstays of an institution that might not be available were it not for the work happening at the lending museum. Russell likens the opportunity to house those beloved, familiar pieces to being invited to a dinner party.

For MFA St. Pete, the loan has a generative nature, helping museumgoers essentially challenge their previous assumptions about works in their core collection and makes it exciting to participate in, she says. What Art Bridges has done for them is to collapse the typical challenges to art borrowing, including the barriers to collaboration between institutions of varying sizes, as well as the logistical difficulties of sharing while geographically far apart. It takes a certain level of thought leadership and "facilitating glue" to pull it off and become a reliable resource as Art Bridges has, Russell says.

It has taken some time and some tweaking to get to the model that works for Art Bridges to provide traveling exhibits as a long-term loan to provide gallery interventions, says Paul Provost, CEO of Art Bridges.

At first the idea was to bring all works to one location, like an art depot, but organizers have happened on a variety of ways to secure works from one large museum and get them across the country to another, smaller museum in groups of 10 and 15.

"We deploy artworks to achieve certain outcomes," Provost says. "We give them works (by) women, Black artists to entice. It's difficult to get a community in the door without any works of interest to them there."

Grandinetti says the Art Bridges collection loan program boils down to being collegial, establishing a relationship built on trust and bundling the artworks, then helping the lender and borrowers in the process of sharing them over time.

"Now we have a good model to look forward to launching (a new partner in) American Folk Art Museum," Grandinetti says. "With efficient, safe care and custody." 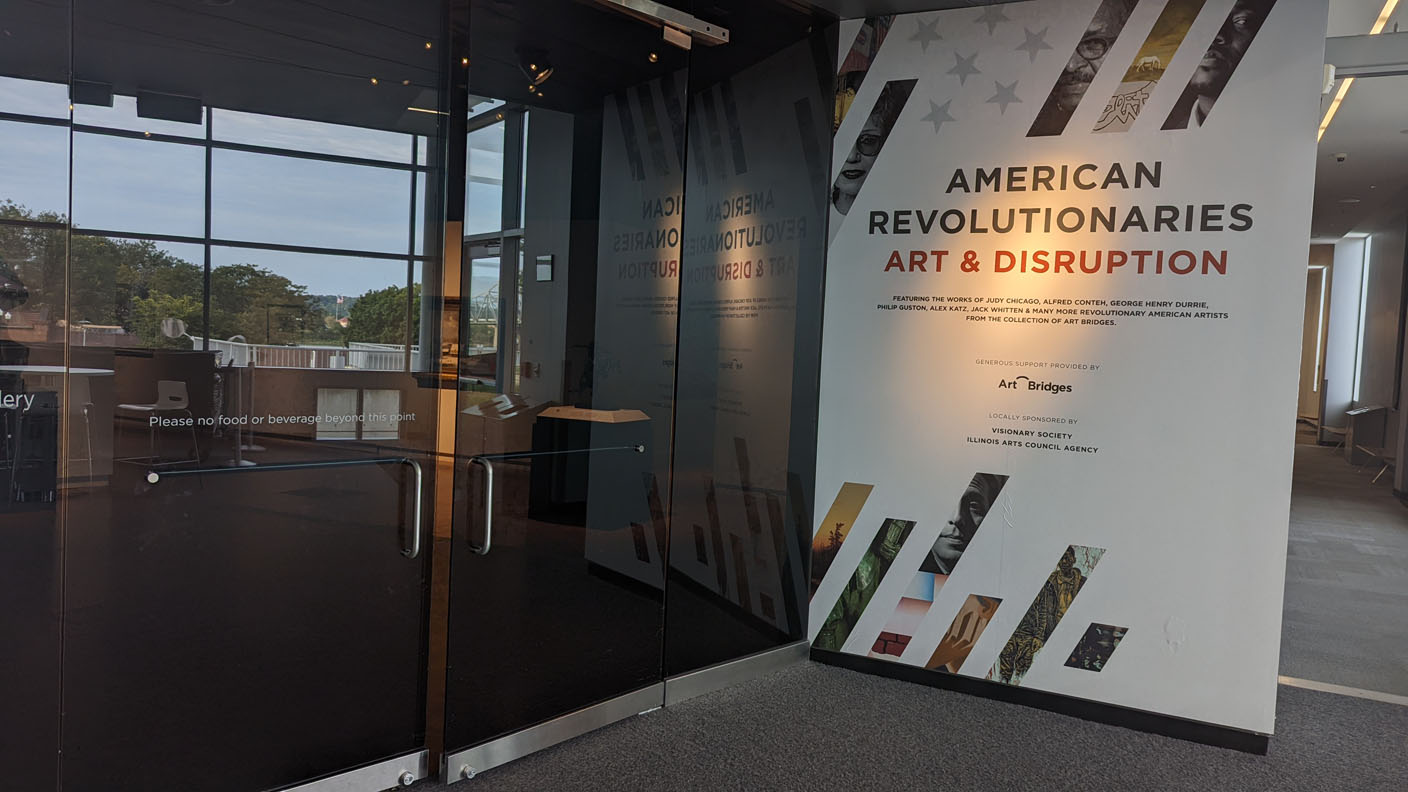 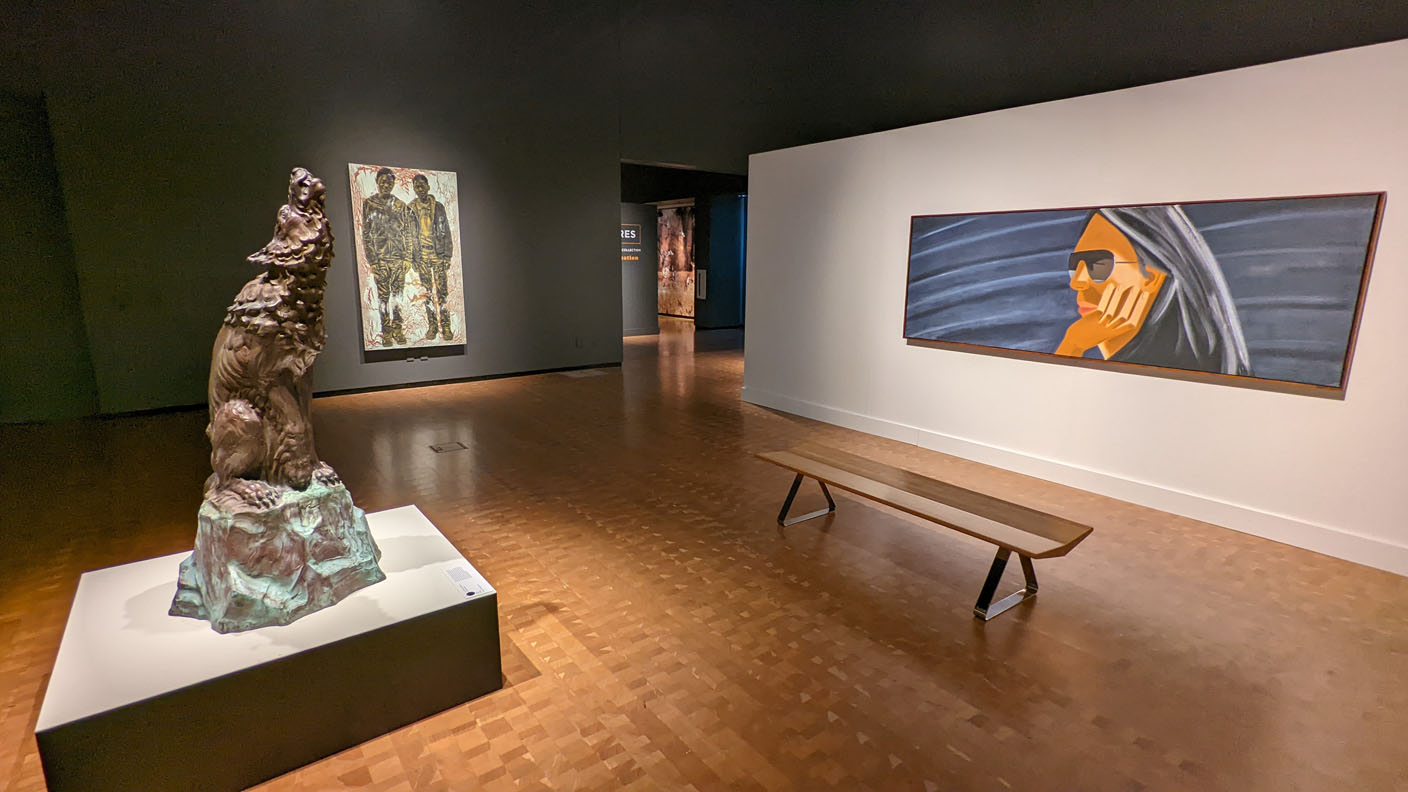 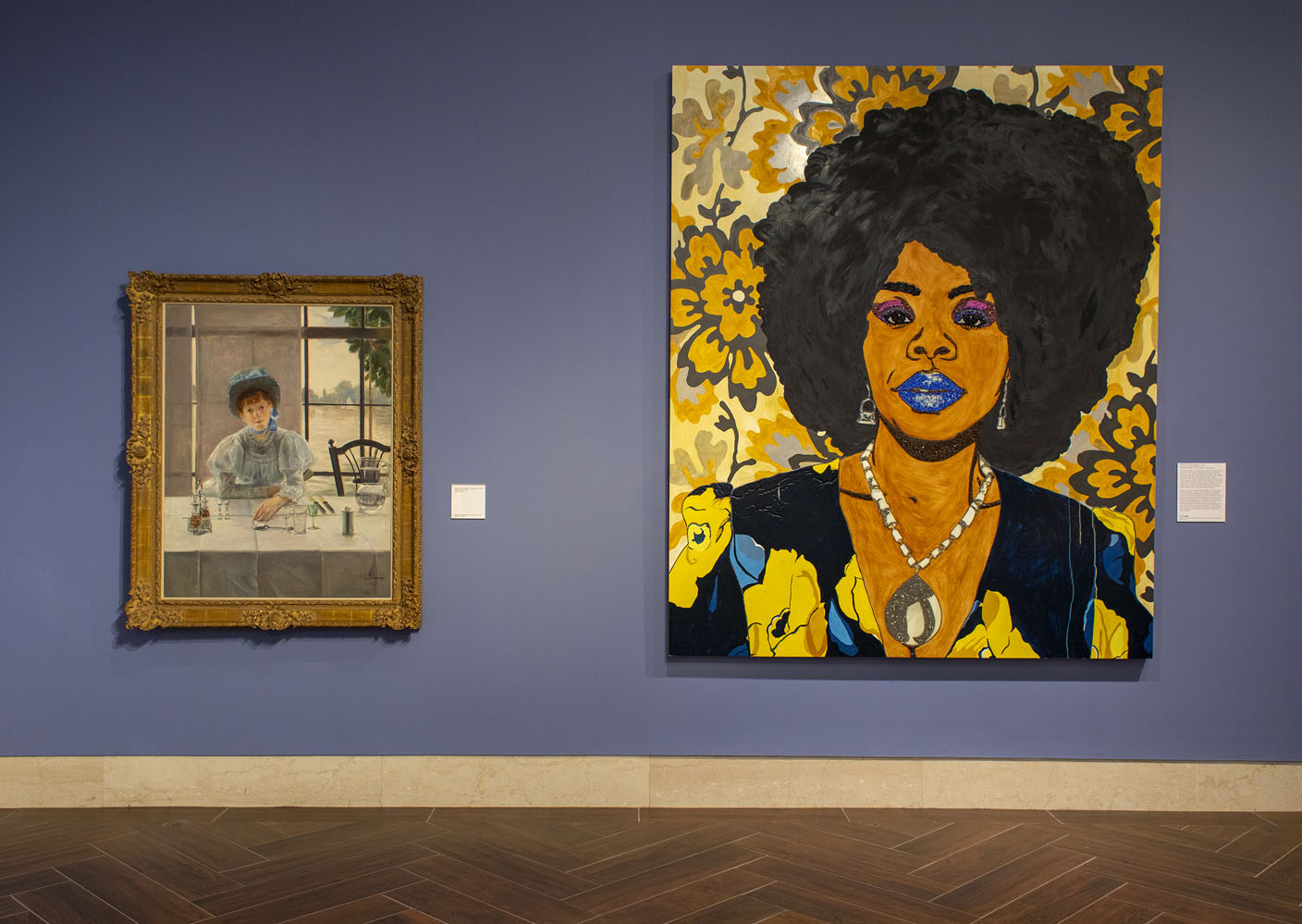 On the right is Mickalene Thomas’ “Din, une très belle négresse 1,” a work made of rhinestones, acrylic, oil and enamel on wood panel, shown here at the Museum of Fine Arts in St. Petersburg, Fla. The work is a part of “In Dialogue: Unexpected Visual Conversations,” which is on loan from Joslyn Art Museum. The collaboration was made possible through the Art Bridges collection loan partnership. (Courtesy Photo/Museum of Fine Arts, St. Petersburg)