Sanders says she intends to vote against recreational marijuana amendment 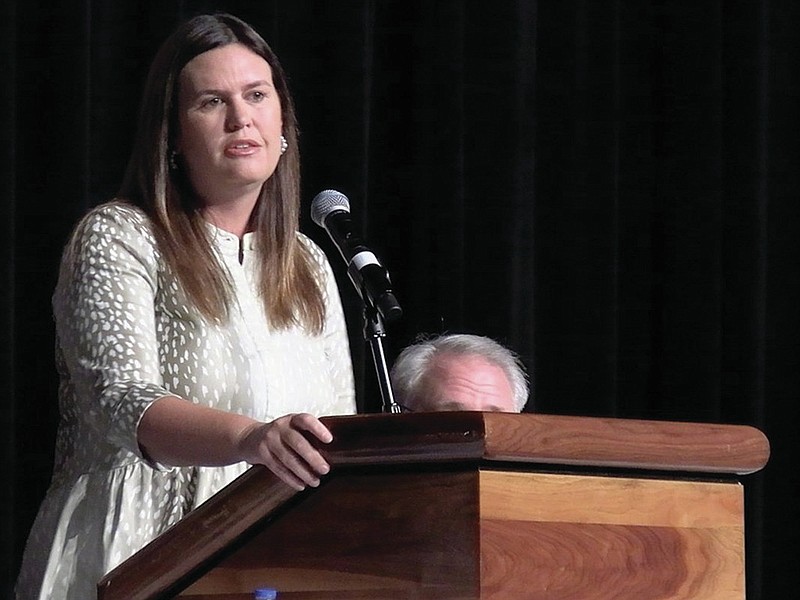 "I don't think that with the drug epidemic that we have across this state, frankly across the country, that adding and giving more access to that does anything to benefit Arkansas, so I certainly wouldn't be supportive of that," she told reporters.

Sanders' comments came after she appeared at a campaign event for the first time since she announced on Sept. 16 that she had surgery to remove her thyroid and surrounding lymph nodes after cancer was found in the area.

She spoke for about a dozen minutes before about 400 people at the Cabot Veterans Park Community Center.

After her remarks, she visited individually for nearly an hour with people, who stood in line to speak with her and had their pictures taken together.

Both Democratic gubernatorial nominee Chris Jones and Libertarian gubernatorial candidate Ricky Dale Harrington Jr. have said they plan to vote for the proposed constitutional amendment that would legalize recreational marijuana.

Jones said last month that "this initiative is a good first step toward Arkansas embracing a pragmatic cannabis policy."

Harrington said last month that "I do have issues with the Responsible Growth amendment, but I believe it is a step in the right direction."

On Sept. 22, the Arkansas Supreme Court overturned a decision by the state Board of Election Commissioners to pave the way for votes to be counted in the Nov. 8 general election on the Responsible Growth Arkansas' proposed constitutional amendment that would legalize recreational marijuana in Arkansas.

The proposed constitutional amendment would limit the sale of cannabis to people 21 or older and prohibit advertising and packaging designed to appeal to children. It would provide regulatory oversight by limiting the number of licensed businesses and would not allow homegrown cannabis. It also would limit the number of cannabis licenses to 20 cultivators and 120 dispensaries statewide, which includes existing medical marijuana licenses.

In 2016, Arkansas voters approved Amendment 98, the constitutional change that legalized cannabis for medical use. The first dispensaries in the state opened in 2019.

Asked about the proposed constitutional amendment that would allow the Legislature to call itself into special session, Sanders said Monday night that "I think that our Legislature spends a lot of time in session as it is.

"I think that a full-time Legislature is probably not the best thing for the state of Arkansas right now," she said.

Asked if that means she plans to vote against the proposed constitutional amendment in the Nov. 8 general election, "We'll see...," Sanders said. "I will tell you when I get there."

Asked about the proposed constitutional amendment allowing the Legislature to call itself into special session, Jones said in a recent interview that he doesn't support it.

Sen. Breanne Davis, R-Russellville, proposed this constitutional amendment and the Legislature voted in the 2021 regular session to refer it to the 2022 general election ballot.

The proposed constitutional amendment would permit the General Assembly to convene in an extraordinary session by a joint written proclamation of the speaker of House and the Senate president pro tempore or by the submission of the signatures of two thirds of the members of the 35-member Senate and 100-member House of Representatives. Lawmakers would be required to state the reason for the special session, and once that purpose is accomplished, the session could be extended by up to 15 days by a two-thirds majority of both chambers.

Under current law, only the governor can call a special session and the governor sets the agenda for the session.

"The voters should have a say in that, but I think increasing that percentage is something that we should be supportive of across the board," she said, and she plans to vote for this proposed constitutional amendment.

But Jones said in a recent interview that this proposed constitutional amendment takes voices away from Arkansans.

State Rep. David Ray, R-Maumelle, proposed this constitutional amendment and the Legislature voted in the 2021 regular session to refer it to voters in the Nov. 8 general election.

Asked how she is feeling in the aftermath of her surgery, Sanders told reporters that "I feel great.

"It is wonderful to be back out on the campaign trail. I feel good and energized and looking forward to finishing strong over this last month," Sanders said.

Asked about her plans for the next week, she said, "I like to keep my foot on the gas pretty much at all times, so we are doing a mix like we normally do of different tours, meeting with people sometimes in bigger groups like this, and sometimes in smaller round table settings.

"But we are going to continue pushing hard all the way through Nov. 8," Sanders said.