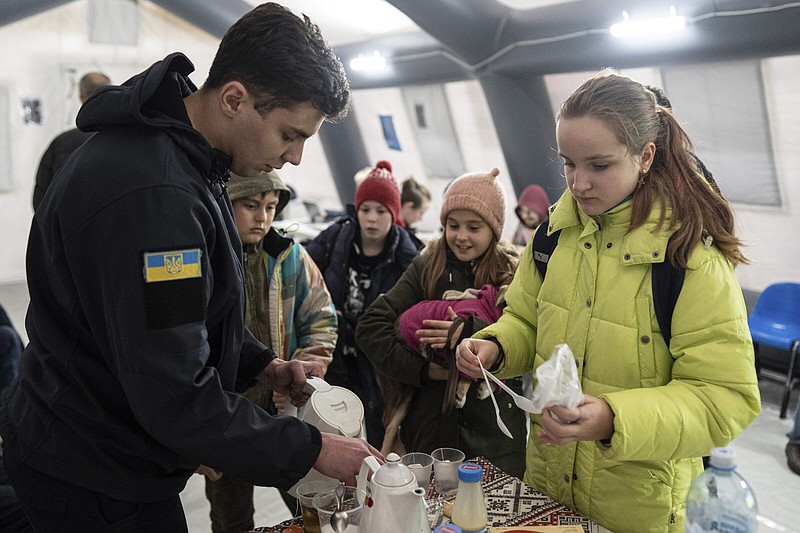 KYIV, Ukraine -- Russia held back Monday from launching a new round of strikes that have been expected against power stations and other key infrastructure in Ukraine, as officials warned a lingering energy and water crisis from earlier attacks could prompt more evacuations from the capital.

"Every time we will be restoring it, the Russians will be destroying it," he told counterparts from seven Baltic and Nordic countries.

The foreign ministers from Estonia, Latvia, Lithuania, Iceland, Sweden, Norway and Finland pledged more military, economic and humanitarian aid as an energy crisis deepens and Ukrainian forces seek to move on with a counteroffensive against Russian troops.

In Israel -- which has straddled a fine political line in the conflict -- its Channel 13 reported that a high-level Ukrainian delegation recently visited to discuss an Israeli pledge to provide a system that detects incoming missiles. Israel's Defense Ministry declined comment.

Israel has voiced support for Ukraine but has refused so far to provide it arms or impose sanctions against Moscow because of its sensitive ties with Russia. Israel's and Russia's militaries communicate to avoid conflict in Syria. Israel also does not want to endanger the large Jewish community in Russia.

Ukrainian President Volodymyr Zelenskyy warned late Sunday that Russian troops "are preparing new strikes, and as long as they have missiles, they won't stop." He met Monday with senior government officials to discuss what actions to take.

"The upcoming week can be as hard as the one that passed," he predicted.

Kyiv Mayor Vitali Klitschko said some of the city's 3 million people might have to be evacuated to where essential services would be less prone to shutdowns caused by missile attacks.

For weeks, Russia has been pounding energy facilities around Kyiv and other Ukrainian cities with missile strikes, usually on Mondays at the work week's beginning, resulting in outages of power and water supplies.

With temperatures hovering around freezing, and expected to dip as low as 12 degrees in little more than a week, international help was increasingly focused on items like generators and transformers, to make sure blackouts that affect everything from kitchens to operating rooms are as limited and short as possible. The power situation was so dire that Ukraine's energy trader -- in normal times an exporter -- tested importing electricity from neighboring Romania.

Putin "continues trying to make Ukraine a black hole -- no light, no electricity, no heating to put the Ukrainians into the darkness and the cold," said European foreign policy chief Josep Borrell, who is leading a meeting of EU ministers in Bucharest to help Ukraine with its humanitarian crisis. "So we have to continue our support providing more material for the Ukrainians to face the winter without electricity."

Ukraine's energy provider Ukrenergo said Monday it is still short 27% of output and that "the scale and complexity of the damage are high, and repair works have continued around the clock."

Power supply was restored to 17% of residents in the southern city of Kherson, which Ukraine reclaimed earlier this month. The Russians have continued pounding the city with artillery barrages from newly consolidated positions across the Dnieper River. Britain's Defense Ministry reported that the strikes reached a record high, 54, on Sunday.

Zelenskyy said in his nightly video address Monday that Russian forces had fired 258 times on 30 settlements in the Kherson region over the past week, and had damaged a water pumping station for Mykolaiv.

Ukraine's presidential office said Monday that at least four civilians were killed and 11 others wounded in the latest Russian attacks. It said intense fighting is continuing in the east, with the Russians shelling Bakhmut and Toretsk.

"People are sheltering in the basements, many of which are filled by water," said Donetsk Gov. Pavlo Kyrylenko. "They have been living in catastrophic conditions without power or heating."

Also Monday, Russia denied that it plans to withdraw from the Zaporizhzhia nuclear power plant in southern Ukraine, which it has occupied since the early days of the war.

Kremlin spokesman Dmitry Peskov said in a call with reporters that it was pointless to look for signs of a pullback from the plant "when there are none and there can't be."

Peskov's comments were in response to Ukrainian claims that Russian forces were bound to retreat from the plant as they face a Ukrainian counteroffensive.

The plant was shut down because of repeated shelling, for which Russia and Ukraine have traded blame. The U.N. nuclear watchdog and international leaders have urged Russia to demilitarize the plant to avoid a nuclear disaster, but Moscow has rejected the demands, arguing that it needs to maintain troops there to ensure its safety.

Also Monday, a Russian official told the Tass news agency that nuclear workers who have refused to sign contracts with a Russian company claiming to have take over the plant's operations are barred from entry.

Information for this article was contributed by Raf Casert and Andrew Katell of The Associated Press.