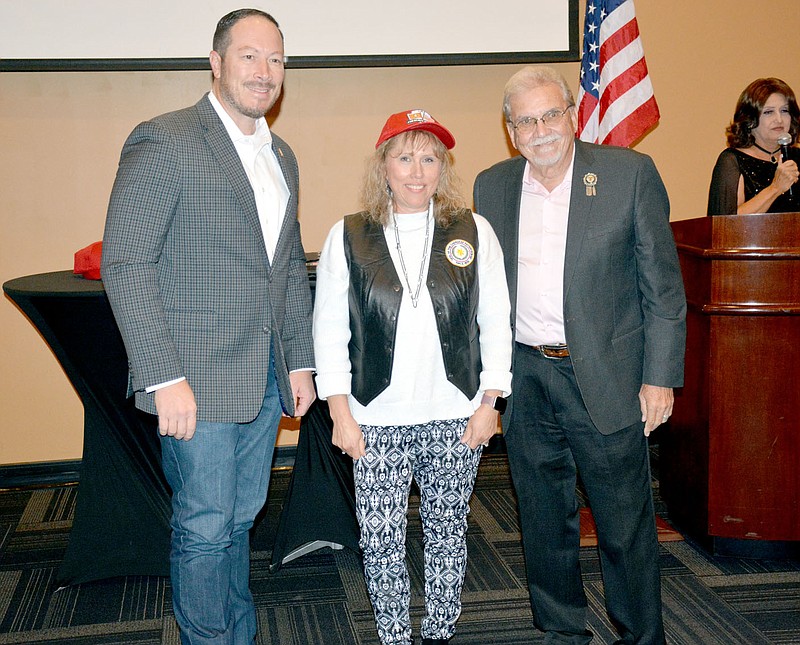 Navy veteran Michelle Lyn Morrison (center) of Stilwell, Okla., receives her flight vest and hat for the Warrior Flight on Nov. 9 from Deputy Chief Bryan Warner (left) and S. Joe Crittenden, the secretary of veterans affairs for the Cherokee Nation. Morrison, who served in Operation Enduring Freedom, is the first female veteran of the Cherokee Nation to be a part of the Warrior Flight, Warner said. (NWA Democrat-Gazette/Marc Hayot)

On Nov. 9, a dinner was held at the Cherokee Hotel and Casino in West Siloam Springs, Okla., to present the veterans with vests and caps, the release states.

"This is one of the biggest things that we do," Deputy Chief Bryan Warner said. "It's so good that we honor our veterans because Native Americans serve at a higher rate in any of our armed forces and have since the beginning of time until now, and it's something to be proud of."

That evening, each veteran was called up to receive their cap and vest and pose for photos with Warner and S. Joe Crittenden, the secretary of veterans affairs for the Cherokee Nation.

After that the veterans and their guests headed off to rest before the flight. The flight was scheduled to leave early the next morning from Northwest Arkansas National Airport and arrive in Washington, D.C., a few hours later, the release said.

"This is the first time we fired up again," Crittenden said. "This time we were going to take 15. Normally we take 10, or we try to take 10 if somebody doesn't back out. ... If we can do 15 a time or two or three we can make up for those two years that we missed."

This year's flight had a few differences from previous flights. The first was the addition of the first female veteran to travel on a Warrior Flight.

"I think that's something extra special," Warner said. "I hope it kind of stirs up everybody else that's out there and they think, 'Hey, there needs to be more females in these things.'"

The second difference is that the flight was scheduled for Veterans Day week because it was in conjunction with the procession and dedication ceremony of the National Native American Veterans Memorial at the National Museum of the American Indian, Crittenden said.

Crittenden, a Navy veteran who served in the Vietnam War, served on the committee for the monument, he said.

"We normally go up there in September," Crittenden said. "So we held off, going in November, and my birthday was the 6th so it was kind of a birthday present."

Crittenden said he enjoys getting together because sometimes a veteran will share something from their time of service rather than a civilian.

"It blesses me to go with those WWII veterans, well any of them, but particularly them," Crittenden said.

Marc Hayot can be reached by email at [email protected] 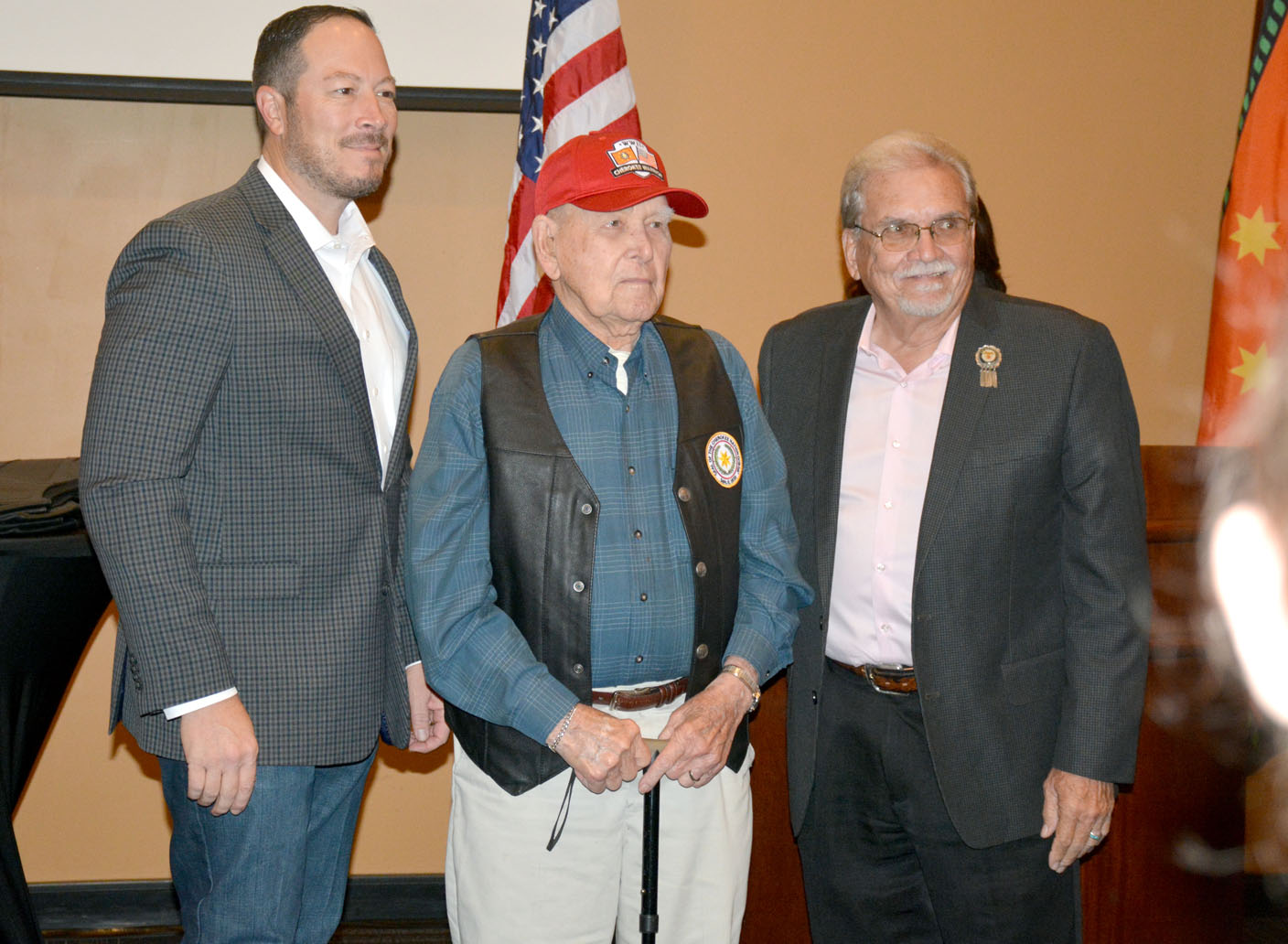 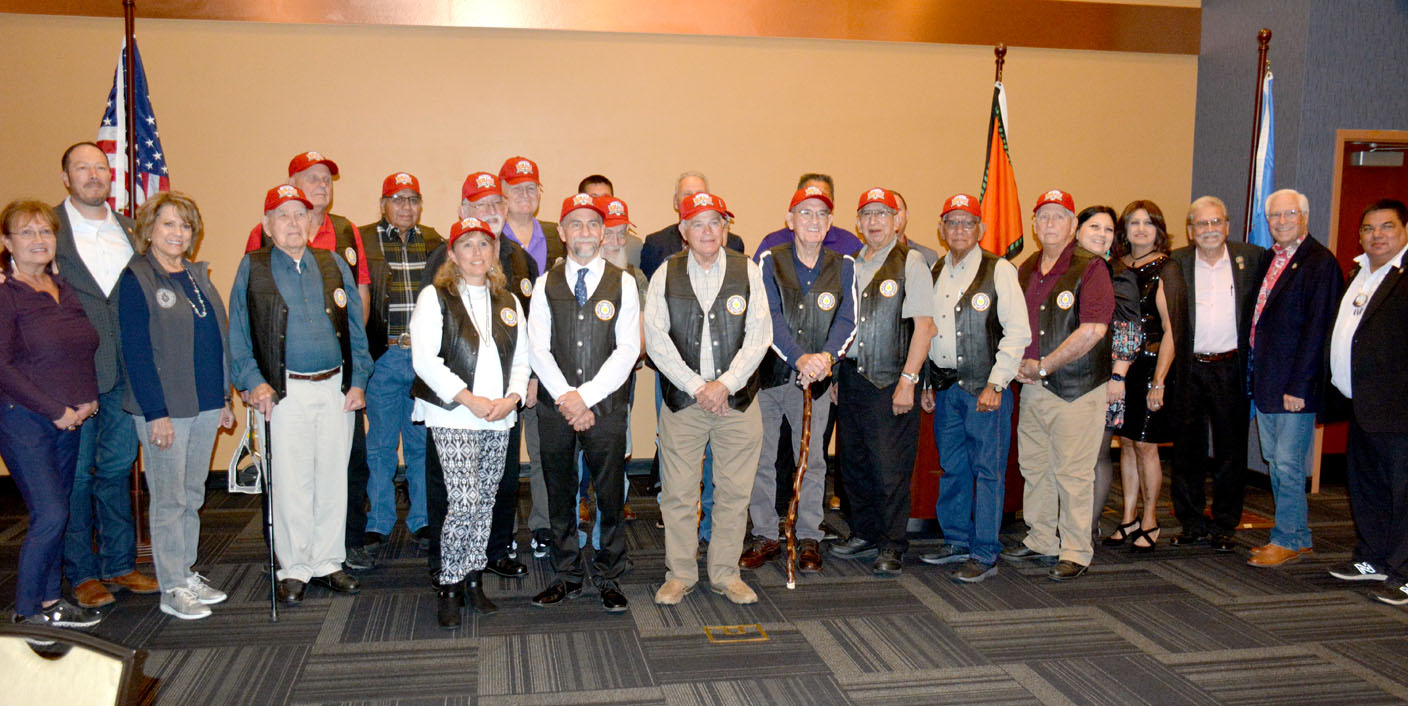