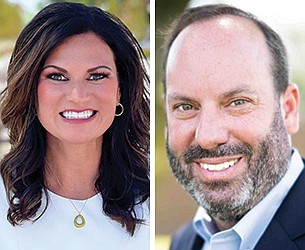 ROGERS — Clay Kendall and Rachel Crawford are working to get supporters to the polls one more time.

Voters will choose between the two in a runoff election for the Rogers City Council Ward 3, Position 1 seat.

Four people ran for the seat in the general election. The runoff is required because no candidate received more than 50% of the vote or 40% with a 20% lead over second place.

Kendall, the incumbent, received 131 more votes than Crawford in the Nov. 8 election, according to final, official results.

“When you have four people in a race, it’s mathematically hard to avoid a runoff,” Kendall said. “I was hoping to avoid it, but no, I’m not surprised.” Kendall said over the next few weeks he will “continue to do the job, support my constituents and make sure supporters are aware there is a runoff.” Some people are unaware of Arkansas’ runoff rules and have assumed the candidate with the most votes won the election outright, he said.

He said he wants to maintain the positive culture at City Hall.

“I want to continue to serve. I feel like we have a very functional city government, and I think we operate efficiently,” Kendall said.

Spreading the word and getting people out to vote a second time can be a challenge, according to Crawford.

She said she is encouraged that the three challengers in the general election cumulatively garnered more than 60% of the vote. According to Crawford, the final count “shows that Rogers is ready for a change in representation.” “My focus areas of responsible planning for growth, area-leading support for first responders and effective communication to Rogers residents have been the foundation to my campaign and will continue to be,” she said.

Both candidates have experience with Rogers city government: Kendall as a council member since 2012, Crawford as a Planning Commission member since 2018. Crawford is now the commission’s chairwoman.

Ward 3 generally represents the southwest part of town, including the area west of Dixieland Road and south of New Hope Road and all areas west of Interstate 49. The Pinnacle Hills, Pleasant Crossing and Shadow Valley neighborhoods and Rogers High School are within the ward’s boundaries.

Every registered voter in Rogers can vote in the runoff, even if they did not vote in the general election.

All eight council seats are elected at-large, meaning all city voters vote in all races, according to the Benton County Election Commission. Rogers has four council wards with two council members representing each ward. Council candidates must live in the ward they represent.

The City Council is nonpartisan and members serve four-year terms. The council meets publicly twice a month. Members are paid $13,416 per year, regardless of meeting attendance.

The Rogers Fraternal Order of Police has endorsed Crawford. Her husband, David, is president of the organization.