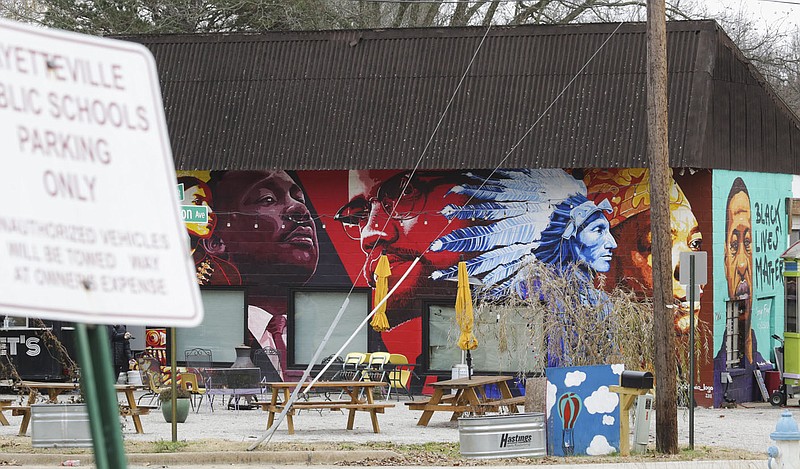 A mural is shown, Saturday, November 26, 2022 across from the former Jefferson Elementary School building in Fayetteville. The history of the Black community is disappearing, and those who want to preserve it fear the sale of Jefferson Elementary could be the final, fatal blow. Visit nwaonline.com/221127Daily/ for today's photo gallery. (NWA Democrat-Gazette/Charlie Kaijo)

FAYETTEVILLE -- The history of race relations in Fayetteville and Washington County did not begin in 1954, when the Fayetteville School District became the second in Arkansas to obey the U.S. Supreme Court ruling desegregating public schools, history records show.

No trace of the school remains. No entry for it or mention of it is found in the online Encyclopedia of Arkansas, run by the Central Arkansas Library System with support from the state. There is no entry in the encyclopedia for the school's founder, Ebeneazor Enskia Henderson, either. The results found by the Google search engine for "Ebeneazor Enskia Henderson Arkansas" lead back to fayettevillehistory.org.

The Henderson School is one example of "erasure" of Black history in Northwest Arkansas, said Sharon Killian, board president of the nonprofit NWA Black Heritage. The Veterans Administration hospital in Fayetteville sits upon what was once a Black neighborhood, she said. The Confederate Cemetery takes up land where slave quarters once stood, she said.

Even the graves of many of Northwest Arkansas' earliest Black residents are unmarked, a legacy of slavery, she said.

Historically, conditions for Blacks were better in Fayetteville than in the rest of the state, Killian said in an interview. But there is a big difference between "better" and "good," she added.

One of those differences is the history of discrimination against Black residents of Fayetteville is easier to erase while, at the same time, the structure benefiting the majority population at the expense of the minority persists, she said.

"Everybody talks about the region as a wonderful place with no troubles here," Killian said. Yet until segregation as imposed by law was removed, a Black student could not attend high school in Fayetteville. The nearest segregated high school for Black students before 1954 was in Fort Smith.

Fayetteville has about 5,700 Black residents, according to U.S. Census Bureau estimates.

Fayetteville had a large Black population beginning with slavery. One in every 10 residents of Washington County was owned by someone else in 1860, U.S. census records show. Blacks were drawn to Fayetteville during segregation by relatively better conditions here, including jobs at the University of Arkansas. Those university jobs were menial, Killian said -- "as washer women, cooks and janitors" -- but among the best available at the time.

"I love my home," said Killian, a Fayetteville resident. "I want to be proud of it." Pride requires authenticity, she said. Pride without honesty is false pride, she said.

Killian is right, said Margo Lemaster, executive director of EngageNWA. EngageNWA encourages acceptance and welcoming of diversity. EngageNWA is an initiative of the Northwest Arkansas Council, a group of business and community leaders addressing regional issues.

"You can't have an inclusive community if people living here feel like their history is not being included as part of it," Lemaster said in a telephone interview. And Northwest Arkansas, like other regions around the country to some degree, have persisting issues of "structural racism," she said.

"An inclusive community lets people feel like they belong, that they've put down roots," Lemaster said. "That richness benefits all of us."

"We've heard from the African-American community members they still lack gathering places, cultural places they feel like are their own," Lemaster said.

The lack is nothing new, records show. For instance, Fayetteville was one of 19 towns in Arkansas with accommodations for Black travelers, according to the last online editions of "The Negro Motorist Green Book," the published nationwide guide of safe dining and lodging during segregation.

The book's last available edition, published for 1966 and 1967, shows one entry for lodging and dining in Fayetteville: "N. Smith Tourist Home" at 259 E. Center St. The book lists no other accommodations in Washington or Benton counties.

Killian and supporters of her group asked the Fayetteville School Board to sell the former Jefferson Elementary School site to the nonprofit for $1 for use as part of Fayetteville's NWA Black Cultural Corridor. Jefferson opened in 1932 -- as a whites-only school in what was then a Black neighborhood, Killian said.

The School Board discussed the sale for hours at its Nov. 17 meeting, but in the end decided the school district could not responsibly turn down an offer of $1.865 million for the property. This is the same sort of result that always favors the advantaged over the region's minority residents, Killian said.

That is not a deliberate intent, said Shawn Schwarzman, founder of the nonprofit Potter's House, which submitted the winning proposal for Jefferson.

"We wanted to make sure the building would be part of the community, not demolished or turned into some development," he said. His group will listen to and partner with any other organization that wants to accomplish the same, he said. 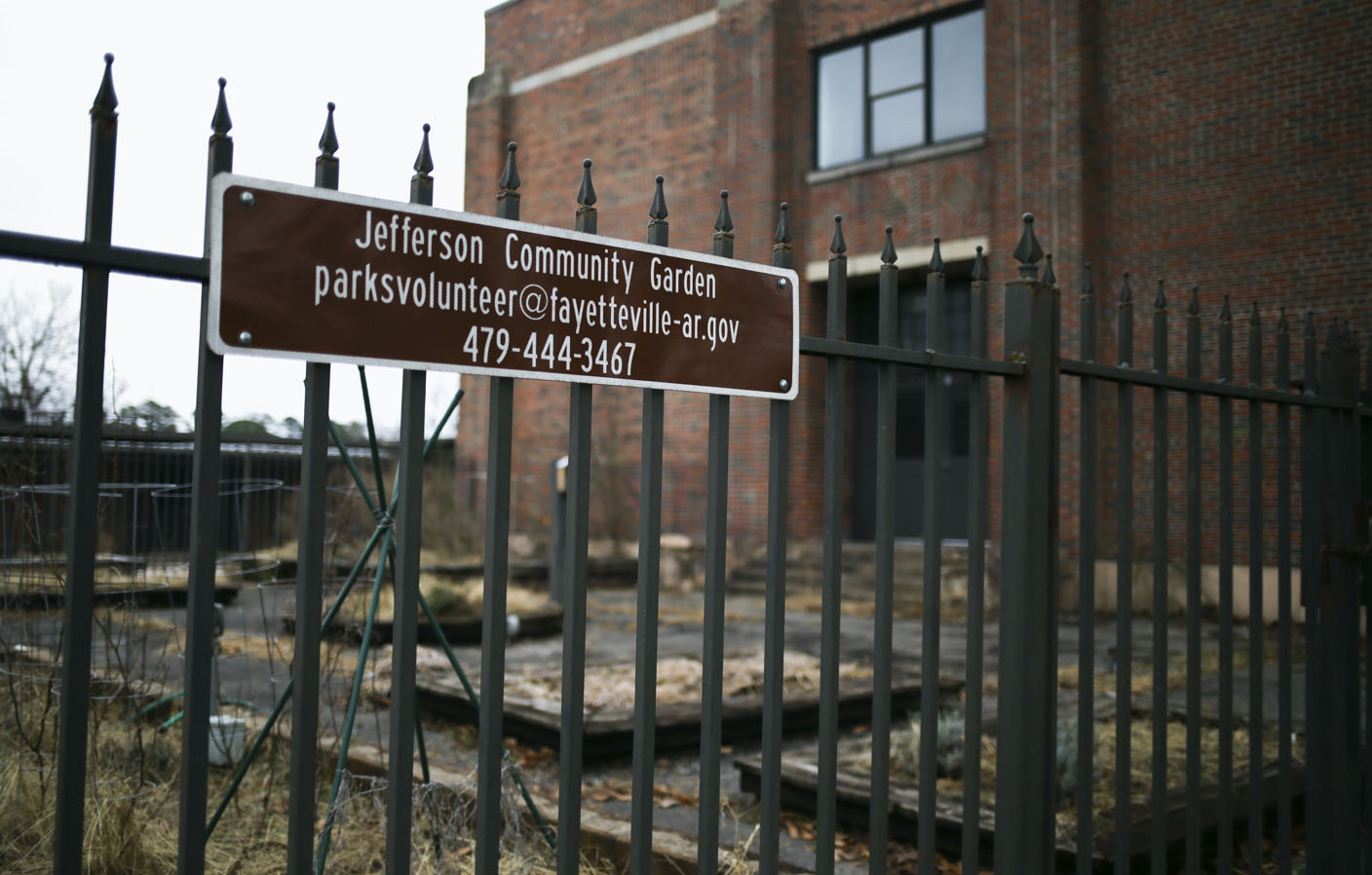 A community garden is shown, Saturday, November 26, 2022 at the former Jefferson Elementary School building in Fayetteville. The history of the Black community is disappearing, and those who want to preserve it fear the sale of Jefferson Elementary could be the final, fatal blow. Visit nwaonline.com/221127Daily/ for today's photo gallery. (NWA Democrat-Gazette/Charlie Kaijo) 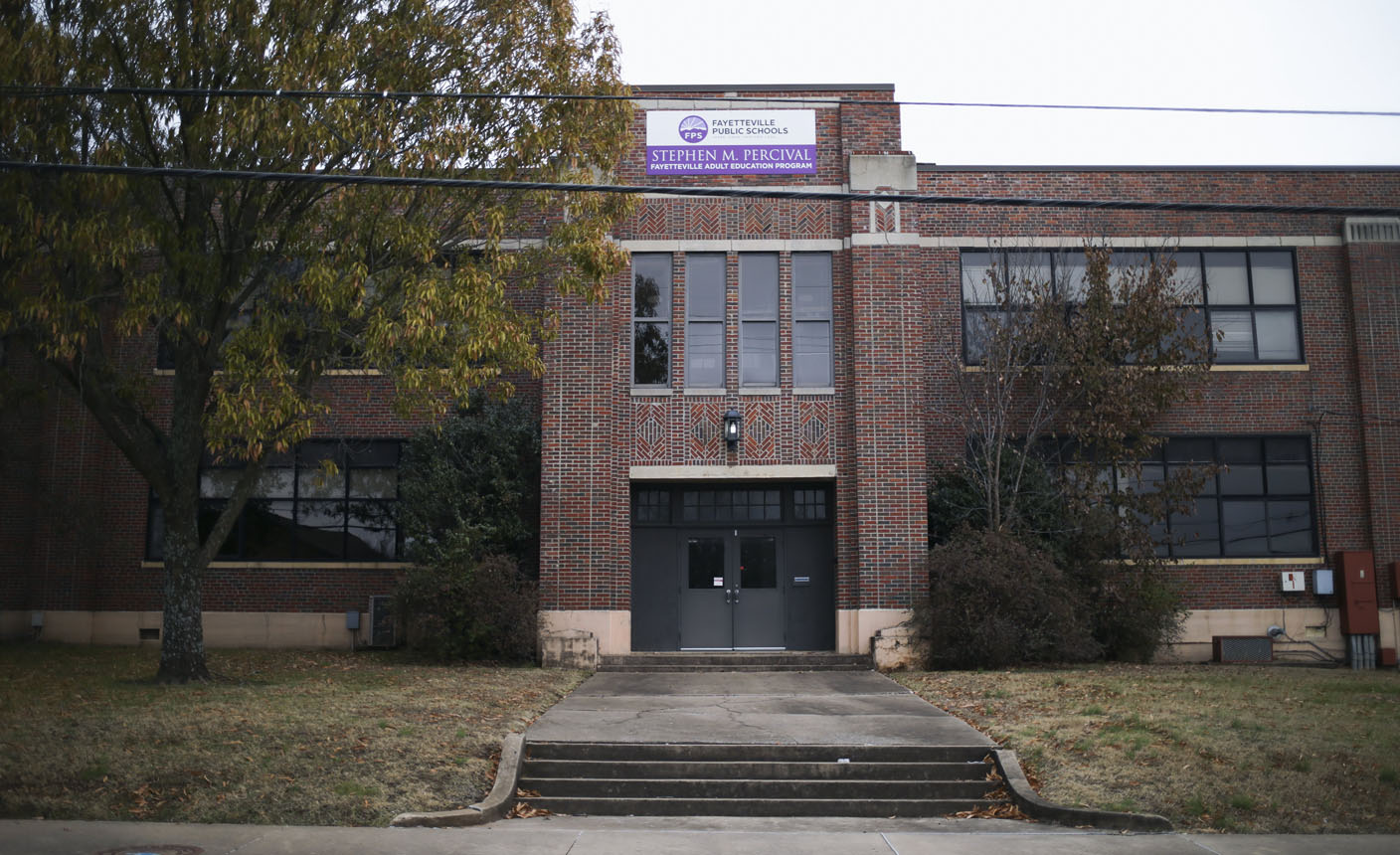 The former Jefferson Elementary School building, Saturday, November 26, 2022 is shown in Fayetteville. The history of the Black community is disappearing, and those who want to preserve it fear the sale of Jefferson Elementary could be the final, fatal blow. Visit nwaonline.com/221127Daily/ for today's photo gallery. (NWA Democrat-Gazette/Charlie Kaijo)