Evan Laird (left) and Ryan Layes, both students at Elkins High School, operate a VEX robot Friday, Nov. 18, 2022, while working at school in Elkins. School enrollment region-wide is up 1.8%, but some school districts Ã‘ like Elkins, at 6.1% Ã‘ are seeing significantly more growth than others. Visit nwaonline.com/221120Daily/ for today's photo gallery. (NWA Democrat-Gazette/Andy Shupe)

Northwest Arkansas' public school enrollment rose 1.8% this fall from the same time last year, with the region's charter schools and smaller school districts accounting for much of the increase.

Benton and Washington counties' public schools enrolled a combined 91,037 students as of Oct. 1, up from 89,450 at the same point in 2021, according to state data. A school district's Oct. 1 enrollment figure is often cited as its official enrollment for that school year.

The region's other 11 school districts, meanwhile, had a combined enrollment increase of 3.5% over last year's numbers. The Elkins, Gentry, Greenland and Pea Ridge districts all grew by more than 5%.

Enrollment affects how much money the state sends districts. State funding for any given year is based on a district's average K-12 enrollment in the first three quarters of the previous school year.

Enrollment in Northwest Arkansas has increased consistently for years, usually between 1% and 2%, with the one exception being 2020, when the covid-19 pandemic caused student numbers to fall statewide and nationwide.

The Elkins district saw enrollment grow from 1,292 last school year to 1,371 this year, a 6.1% jump. Over the last eight years, district enrollment has grown 23%.

Jeremy Mangrum, Elkins' superintendent, said he was expecting growth this year, but was a little surprised by its size. The district anticipates the growth to continue. Officials are planning an addition to the middle school that should provide about eight more classrooms, Mangrum said. He expects to see it completed by August 2024.

The district also is building a 42,000-square-foot multipurpose facility for athletics, extracurricular activities and large group events that should be done by November 2023.

"It's something our community is very excited about," Mangrum said.

The neighboring Fayetteville School District grew 0.7% in enrollment this year over last, and is up 4% from five years ago. Elkins' faster growth rate compared to Fayetteville may have something to do with the relatively cheaper housing costs in Elkins, Mangrum said.

"But I feel like we offer an outstanding educational option. I think other people think that, too," he said.

"A lot we gained through school choice, and then just general enrollment back into the district. Some have been home schooling," Greenland Superintendent Andrea Martin said. "We've had several move-ins as well."

Shane Patrick is assistant superintendent of the Siloam Springs School District, which saw a 4% enrollment increase this year to 4,463 students.

One impact of the increase is additional stress on the district's Transportation Department, Patrick said. More students means more use of the buses. School districts have long struggled to attract bus drivers, but many districts have found it an especially difficult task since the covid-19 pandemic.

"In fact, that's what I'm fixing to do right now, is go drive a bus," Patrick said during a phone interview on a recent Thursday afternoon. "I'm our emergency driver."

He drives a bus "at least two or three times a week" to help out, he said.

Patrick said district officials are excited by the growth despite challenges.

"When they build a subdivision, within two weeks they've got them full of people. They fill up fast," he said.

The number of students attending open-enrollment charter schools in the region grew again this year by 16%, from 3,932 last fall to 4,560 this fall; that represents 5% of all public school students in the area, compared to 4.4% last year.

Not counted in those numbers are Arkansas Virtual Academy and Arkansas Connections Academy, two online charter schools that draw students from all over the state. They had a combined enrollment of 6,964 as of Oct. 1.

Northwest Arkansas' increase in charter enrollment is primarily owed to both Founders Classical Academy and LISA Academy opening new schools in Rogers. Both schools already had a presence in Northwest Arkansas with campuses in Bentonville and Springdale, respectively. LISA Academy plans to open yet another campus in Fayetteville next fall.

Open-enrollment charter schools are public schools run by entities other than public school districts. They're open and free to students from any district and receive state money based on enrollment. They do not receive property tax revenue.

While Founders and LISA have grown, two of the region's older charter schools -- Arkansas Arts Academy and Haas Hall Academy -- have seen enrollment fall the last two years after several years of growth.

Haas Hall, a charter school district for grades 7-12, has campuses in Bentonville, Fayetteville, Rogers and Springdale. U.S. News & World Report for years has ranked it as the best public high school in the state.

"Many families have decided to continue with learning at home" either in a traditional home-school setting or by enrolling students in an online school, Schoppmeyer said.

A total of 3,415 students living within the Bentonville, Fayetteville, Rogers and Springdale school districts are being home-schooled this school year. Last year, that total was 3,940, according to district officials.

Schoppmeyer also noted Haas Hall is limited in how many seats it can offer for each grade at each of its four campuses.

Haas Hall plans to open another campus in Fort Smith next fall.

At least two of Northwest Arkansas' largest school districts are revising their building plans based on slower-than-expected enrollment growth.

Bentonville School District officials, after reviewing their 10-year facility plan in October, moved back the opening date for their next set of new schools -- an elementary and a middle school -- from 2027 to 2030, according to Janet Schwanhausser, deputy superintendent.

The timeline for new construction is considered annually, Schwanhausser told the Bentonville School Board during a meeting last month.

"So it is quite possible if growth picks up next October, we'll come back and move that elementary/middle school to happen sooner, or maybe it will go even later," she said.

The district is proceeding with plans to add 38,000 square feet onto West High School in Centerton, along with hundreds of additional parking spaces, at a maximum price of approximately $15.9 million, to be completed by January 2024. The district will pay for it with money it's saved in its building fund over several years, Schwanhausser said.

West High opened in 2016 with a capacity of 2,657 students. This project will raise capacity to 3,287, according to the district.

The Rogers School Board this month decided to postpone building a new elementary school that had been in the planning stage for over a year. The district had been on track to build its 17th elementary and open it in time for the 2024-25 school year until the board's Nov. 15 decision.

Superintendent Jeff Perry told the board enrollment growth has slowed, and there is still enough room in other elementary schools to accommodate more than 200 additional students, if necessary.

Rogers' enrollment sits at 15,665, about the same as it was five years ago. 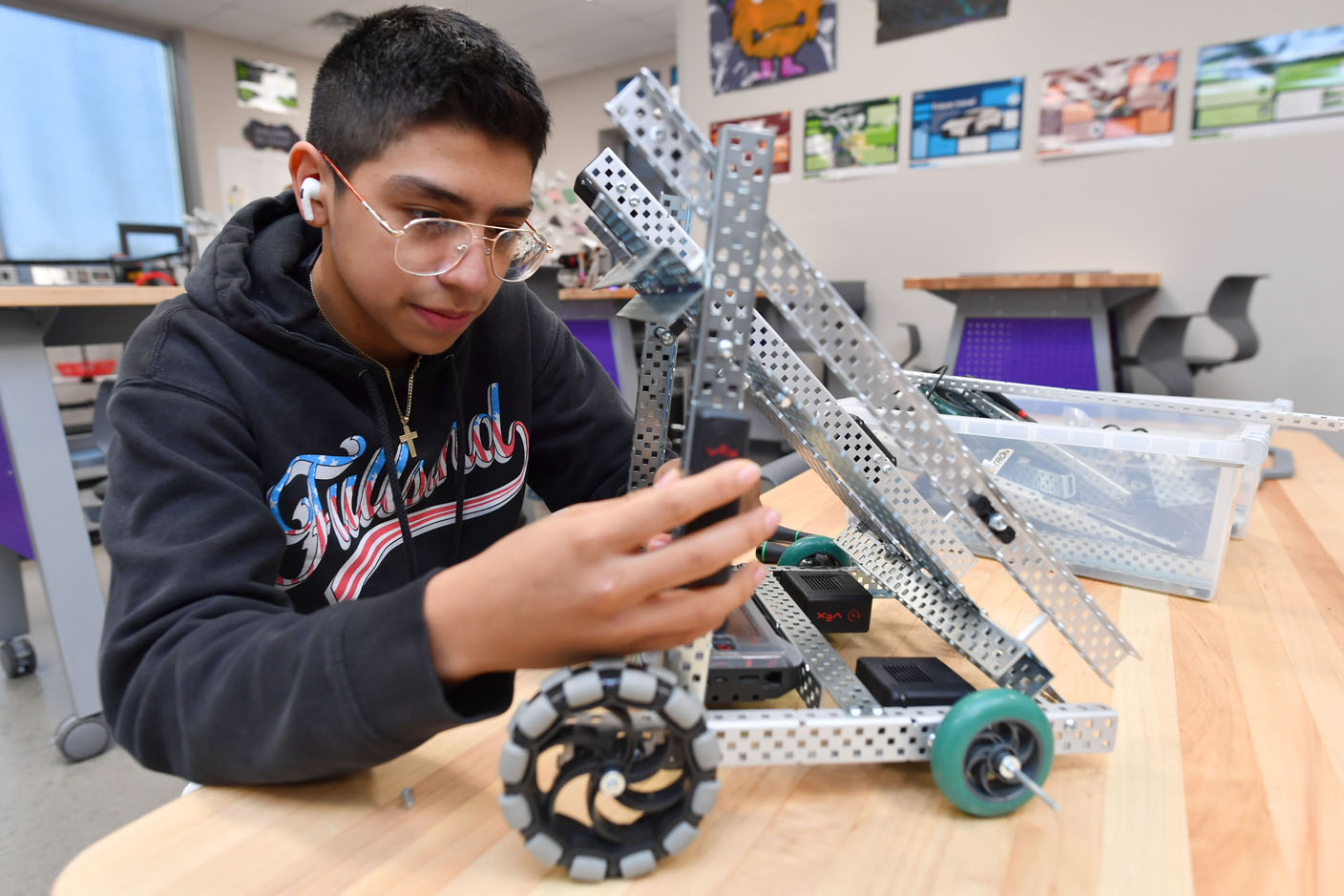 Manny Parker, a student at Elkins High School, assembles a Vex robot for competition Friday, Nov. 18, 2022, while working at the school in Elkins. School enrollment region-wide is up 1.8%, but some school districts Ã‘ like Elkins, at 6.1% Ã‘ are seeing significantly more growth than others. Visit nwaonline.com/221120Daily/ for today's photo gallery. (NWA Democrat-Gazette/Andy Shupe) 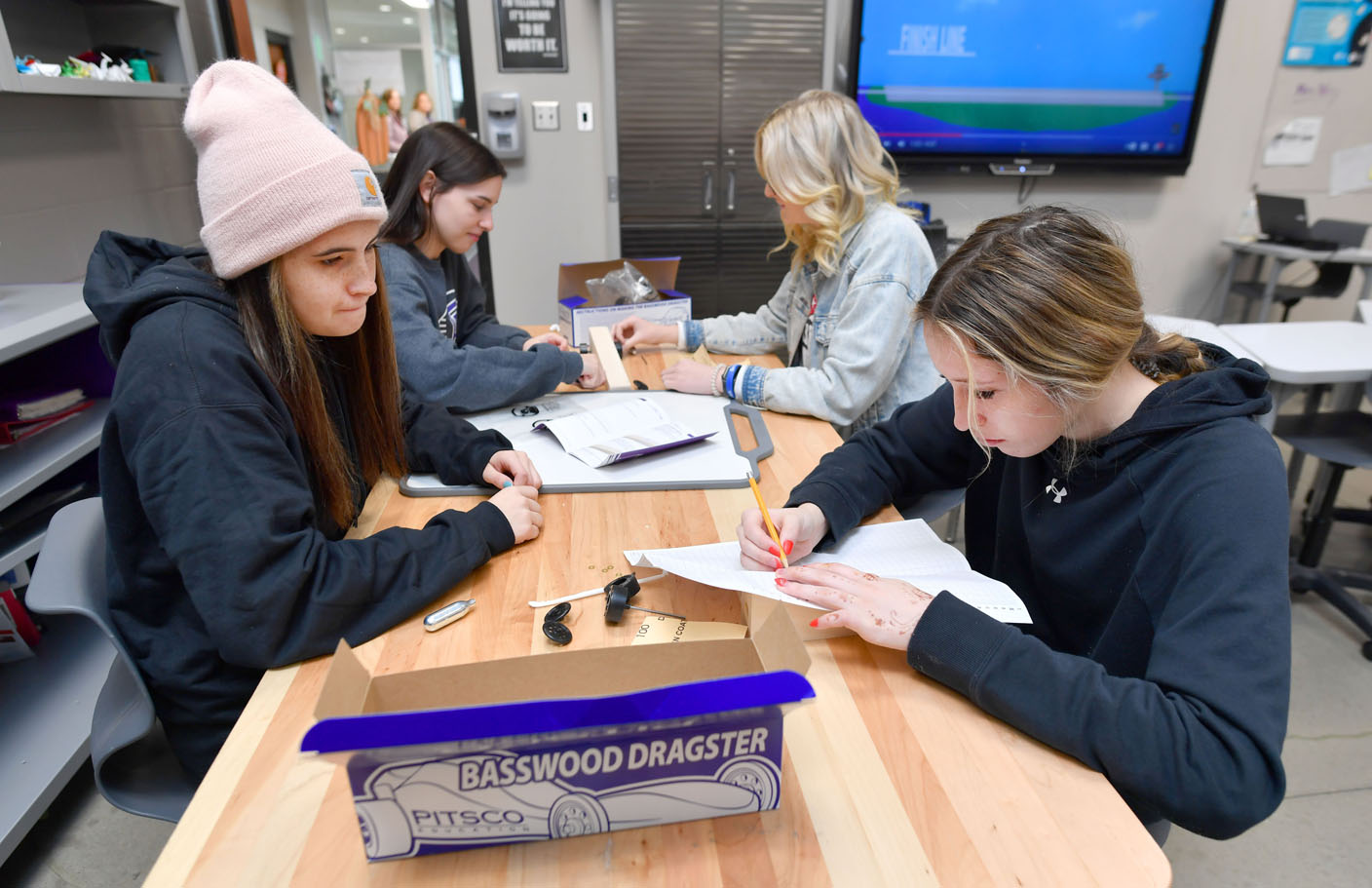 Regan Keller, (from left) Haley Socia, Claire Coleman and Kaylen Coble, all students at Elkins High School, work together Friday, Nov. 18, 2022, to assemble a wooden car at the school in Elkins. School enrollment region-wide is up 1.8%, but some school districts Ã‘ like Elkins, at 6.1% Ã‘ are seeing significantly more growth than others. Visit nwaonline.com/221120Daily/ for today's photo gallery. (NWA Democrat-Gazette/Andy Shupe)

Here’s how public school enrollment figures for Benton and Washington counties (Northwest Arkansas) compare to the state’s overall numbers — and the percentage change year over year — for the last five years. 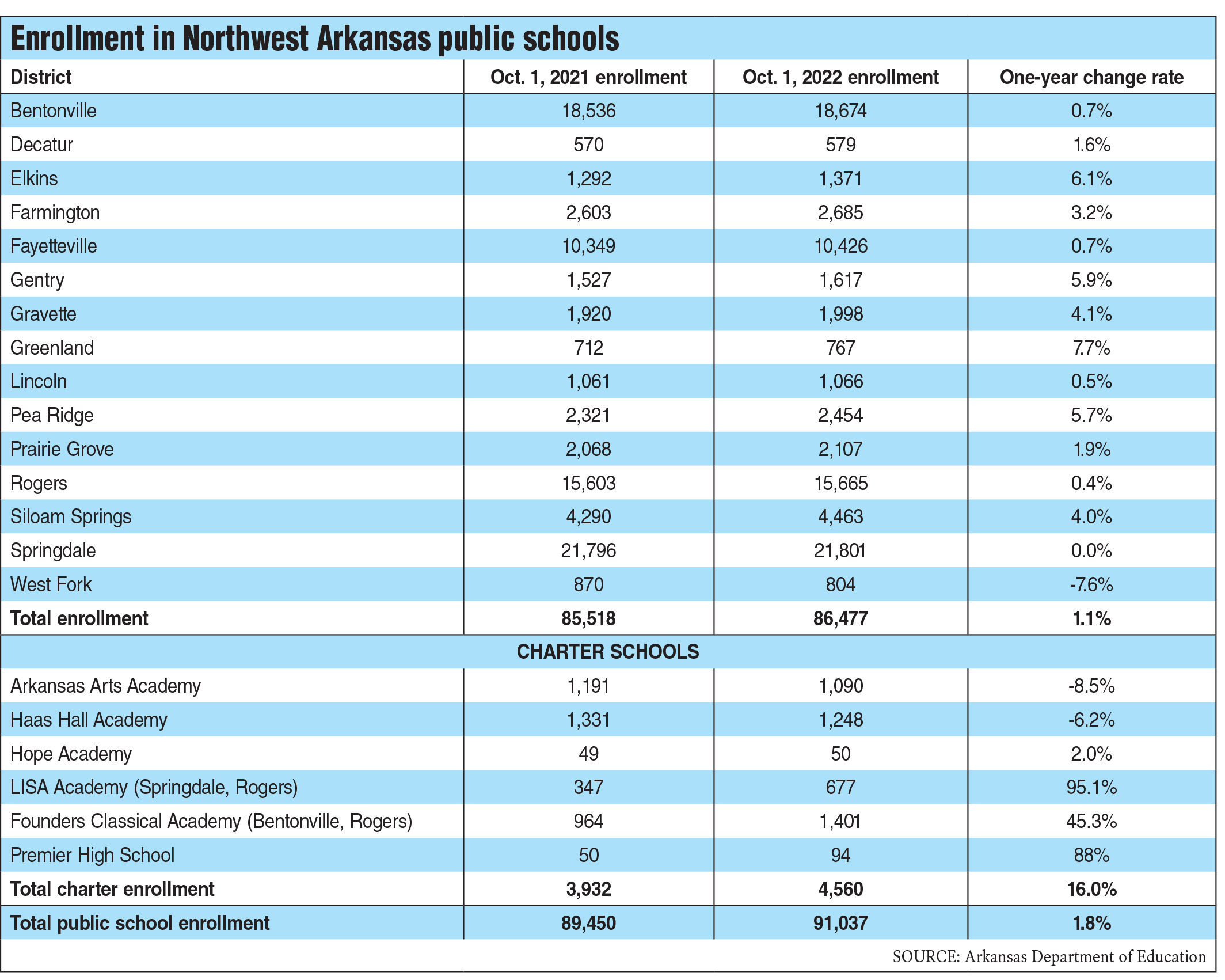