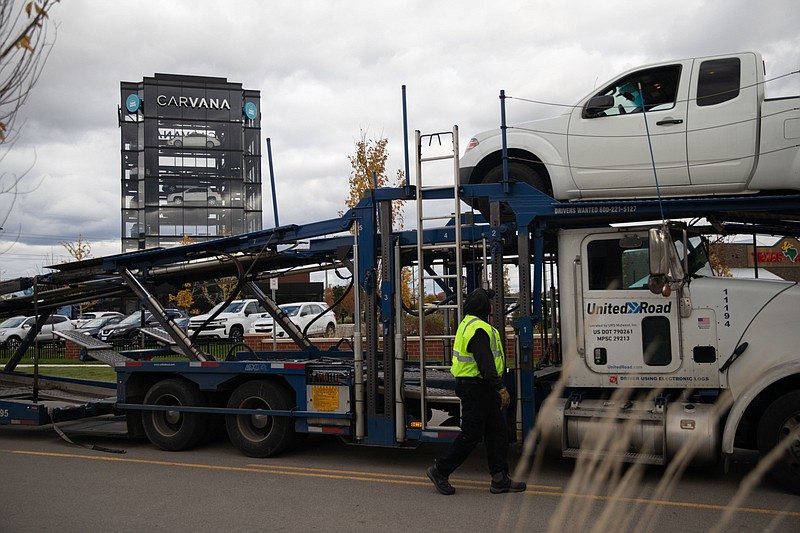 A worker loads up vehicles for inspection before being placed for sale at a Carvana Vending Machine location in Novi, Michigan on Nov. 3, 2021. MUST CREDIT: Bloomberg photo by Emily Elconin.

The spectacular plunge of Carvana Co.'s stock price is bringing pain to many investors, but one elite group on Wall Street is feeling it acutely -- hedge funds.

The online used-car dealer, which has seen its shares fall 97% in the past 12 months, was considered a hedge-fund darling, and for good reason. Collectively, these actively managed funds still own more than a quarter of the company's shares, according to Bloomberg data.

Carvana's tumbling fortunes represent just one among many growth investments that have gone awry for hedge funds this year, providing investors a rare glimpse into how the closely held firms have fared during the intense market selloff. Still, the sheer magnitude of Carvana's rout stands out, threatening to put a sizable dent in their portfolio valuations.

Some have already opted to cut their losses and exit. Earlier this year, Tiger Global Management and D1 Capital Partners bailed on the company. Since D1's disclosed exit in May the stock has sunk about 80%.

About 15 months back, Carvana's downfall was tough to predict. The company, whose technology allows people to buy their used cars from the comfort of their couch, was a pandemic winner. Investors flush with cash rushed into stocks and ideas that made it easier to conduct business without ever stepping outside the home.

But the tables turned this year, with liquidity getting tighter, inflation soaring and the Federal Reserve aggressively raising interest rates, the shares of unprofitable businesses have taken the biggest hits. Investors are now looking for stability and value in the face of a looming recession and have been quick to shun growth stocks. For Carvana, the realities of its business have also changed drastically.

During the pandemic prices of used cars rose to stratospheric heights as new-vehicle production stalled because of supply issues. This year, prices started ratcheting down rapidly as shortages eased, putting pressure on Carvana's margins. At the same time, demand has cooled with consumers getting squeezed by high inflation and rising rates.