Forecasters: Severe weather predicted for much of Arkansas on Tuesday 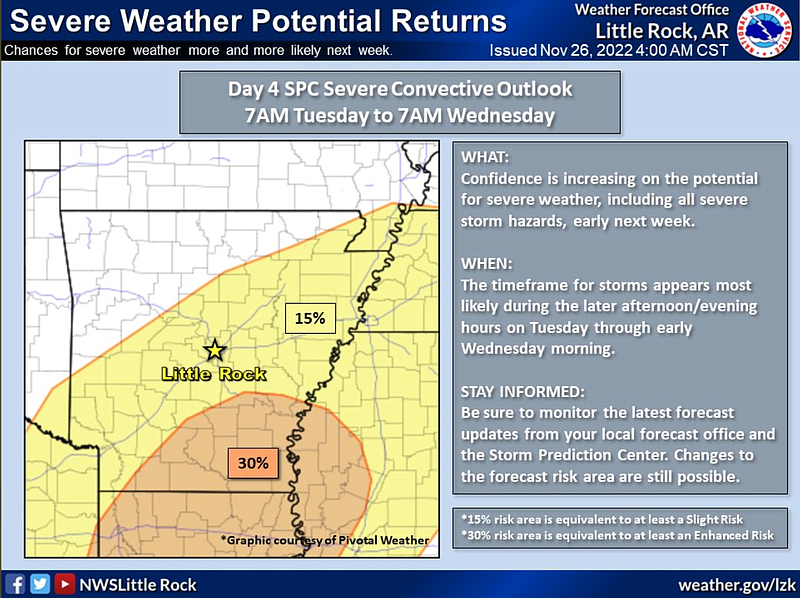 Meteorologists are predicting severe storms for much of Arkansas for Tuesday into Wednesday morning, the National Weather service said.

The weather service in North Little Rock said in a news briefing on Friday that Arkansas has an “increased potential for severe weather” that includes damaging winds, tornadoes and large hail.

“Despite ongoing model uncertainties, confidence in the potential for severe weather, including all severe storm hazards, remains higher than average for early next week,” the weather service said Friday.

The National Weather Service said the Storm Prediction Center shows a 15% risk area, which is equal to at least a slight risk of severe thunderstorms across Central Arkansas. A slight risk means that scattered severe storms are possible, according to a tweet from the weather service.

The Storm Prediction Center shows a 30% risk area for southern Arkansas, equivalent to at least an enhanced risk. An enhanced risk is defined as a chance for numerous severe, persistent and widespread storms, the tweet said.

Rain is forecast across most of Arkansas. There is a 20% chance of rain in the Fort Smith area, 50% in Little Rock and a 70% chance stretching from El Dorado to West Memphis on Tuesday afternoon.

The likelihood of severe weather comes as the National Weather Service’s Central Arkansas radar, located at the North Little Rock airport, is going offline for two weeks for upgrades.

While that radar is offline, weather in Central Arkansas will be monitored by radars in Fort Smith and Shreveport, as well as in Springfield, Mo.; Millington, Tenn.; and Brandon, Miss.

This story has been updated. It was originally published at 11:59 a.m.