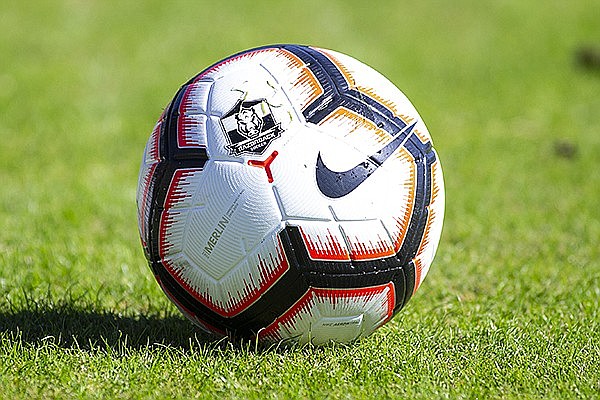 A soccer ball sits on the field prior to a game between Arkansas and Georgia on Sunday, Oct. 27, 2019, in Fayetteville.

The Arkansas soccer team was eliminated in the Elite Eight of the NCAA Tournament for the second year in a row following a 1-0 loss at Florida State on Saturday night.

The top-seeded Seminoles, last year's national champion, broke a scoreless tie with a set-piece goal in the 53rd minute. The score was the game winner despite the teams combining for 24 shots.

The Razorbacks failed to deal with a corner from Jenna Nighswonger that bounced at the near post. Arkansas senior defender Bryana Hunter whiffed on an attempted clearance as it deflected off her into the net.

“I’m really proud of this team,” Arkansas soccer coach Colby Hale said “We are a mis-hit corner kick away from a Final Four.

“This team overcame a lot this year and went toe-to-toe with the No. 1 team in the country for 90 minutes."

Arkansas (13-4-5) appeared to be the likelier team to score through the first 40 minutes. The Seminoles found their footing in the last few minutes of the half.

“I thought our press caused them all sorts of problems,” Hale said. “We just couldn’t get the final touch in the box.”

Florida State succeeded in getting the ball out wide and serving low crosses into the box to keep it away from Arkansas’ dominant aerial forces along its backline. The hosts nearly converted on such a chance right before the break.

Nighswonger, the ACC Tournament MVP, stung a first-time strike toward the goal that required a diving stop from Arkansas goalkeeper Grace Barbara in the 44th minute.

The second half included much of the same as the Seminoles forced Barbara to make a season-high seven saves. Florida State out-shot Arkansas 10-7 in the second half and 13-11 throughout the match.

As the game progressed, it became a track meet with Arkansas flying forward in search of an equalizer and Florida State racing the other way on counterattacks.

The Seminoles nearly doubled their advantage in the 75th minute when Clara Robbins fired a missile past Barbara that clanked off the crossbar from 20 yards away.

Arkansas pressed numbers forward in the game's waning stages but was unable to get a clean look on goal. It was the Razorbacks’ second 1-0 loss of the year, with the first coming in the season opener at Saint Louis.

All of the Razorbacks’ losses came away from Razorback Field, where the team has not lost since 2020.

Florida State (17-2-3) advanced to the College Cup for the third consecutive season and 13th time overall. The Seminoles will play North Carolina in a national semifinal Friday in Cary, N.C., in a rematch of the ACC Tournament Championship Game on the same field.

Arkansas was playing in the Elite Eight for the second time in program history. The Razorbacks lost 4-2 to Rutgers in penalty kicks last season.