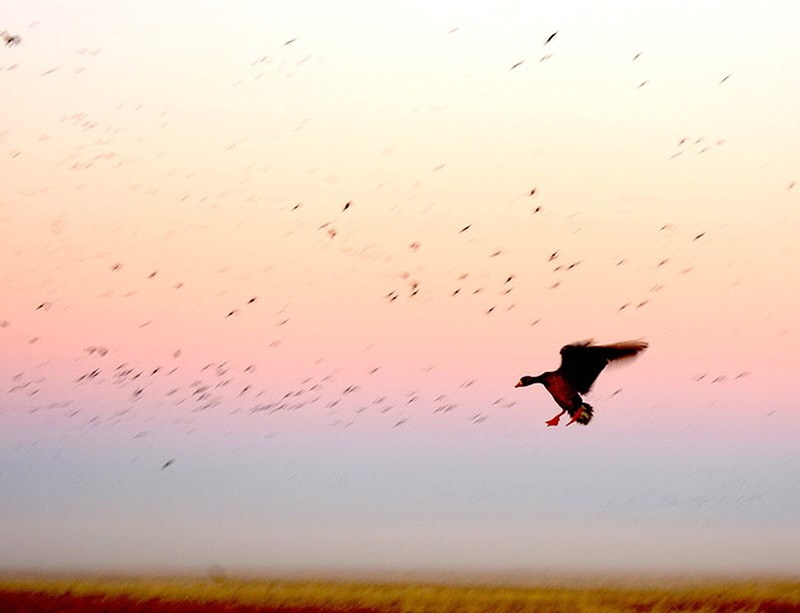 Avian flu is resulting in sick and dead waterfowl from Poinsett County to Drew County, said Luke Naylor, chief of wildlife management for the Arkansas Game and Fish Commission.

On Tuesday, a hunter contacted the Arkansas Democrat-Gazette to report dead geese and ducks in a field near Clarendon and from another field near the Wabbaseka Scatters. He said there were about 200 dead birds in the Clarendon field.

Naylor said hunters are notoriously inaccurate about estimating anything, but he confirmed that the reports are true. An unusually virulent strain of avian flu is circulating primarily among snow geese throughout the Mississippi River Delta. He asked hunters to share all of their observations, including photos and videos, by sending them in email form to the Game and Fish Commission at [email protected]

"That's the best thing people can do to help us out," Naylor said. "We need locations, photos, any kind of detail would be super helpful. We won't be able to get out and collect samples from every report, but we will collect samples to confirm that what we believe is happening is happening."

Naylor said that wildlife managers strongly suspect the culprit is highly pathogenic avian influenza. Young of the year snow geese seem to be the hardest hit.

"Since opening weekend [of duck season], we've been sending people out to get samples," Naylor said. "It will take time to confirm the cause, but we suspect it's avian flu."

Naylor said the commission is preparing a frequently-asked-questions document for the public. In summary, he recommends hunters be smart when handling waterfowl, and to avoid interacting with sick or dead waterfowl that died from causes other than gunshot.

Although the probability appears to be low, there is evidence that the pathogen can be passed to mammals. Alaska's game and fish department recently euthanized a black bear cub that became ill after having eaten a bird that was infected with highly pathogenic avian flu. It was the second bear reportedly infected with the virus. Avian flu has also killed wild foxes and bobcats in Minnesota, Michigan and Ontario.

"I don't think there's a huge human health risk, but it's always a best practice of not doing things that are not advisable, like putting birds in a vehicle and moving them around or handling them," Naylor said. "Keep yourself and dogs away from them to avoid passing it on to the public or to dogs."

Other recommendations are to clean birds in open ventilated locations, Naylor added. "Do not eat, drink or smoke while processing game. Wear gloves while cleaning game and practice safe cleaning procedures. Also, thoroughly cook all game.

Limited habitat is accelerating disease transmission, Naylor said. Geese and ducks are concentrating in limited amounts of habitat that are available in Arkansas at this time. Avian flu sheds through the digestive tract. Geese excrete prodigious amounts of waste which infects entire fields for the next group of birds that arrives.

"It's hard to say it's inevitable, but it's not unexpected that once birds got down here, they've got limited habitat, it's relatively cold, and birds are concentrated," Naylor said. "They're having to work a little harder than normal in early fall in Arkansas, so it's not surprising. And then hunters get out in the field, and all of sudden we start getting reports that geese are falling from the skies and that geese are showing clinical symptoms of disease."

"Thirteen is not 'thousands,' " Naylor said.

Sick geese really do just fall from the sky, usually early in the morning after being rousted from a field. That suggests that avian flu compromises the nervous system.

"They'll stand there, totally lethargic, like they just kind of lost their fear of anything," Naylor said. "I've heard random reports of them getting up and flying into power poles. They land in duck decoys and just stand there and look at you. They stand there with this head twirling type thing going on. Those are classic signs. That seems to be something going on neurologically to cause those signs."

For nearly 20 years, wildlife managers have cautioned each other and the public about the possibility of a catastrophic avian flu outbreak. They coincided with warnings about the possibility of a catastrophic H1N1 type virus breaking out among the human population. Human flu outbreaks were largely benign until the coronavirus pandemic. A similar situation appears to be circulating among wild waterfowl.

"It's a different strain of highly pathogenic avian influenza," Naylor said. "There's still a lot we don't know about the disease, but like any kind of flu virus, there are different strains at different times. In the past waterfowl carried all strains, but they hardly ever experienced large-scale mortality. It almost got to the point where, 'Yeah, stuff circulates, but it has no impact.' But this current strain is not the same. It has a lot greater impact on wild waterfowl in terms of actually showing symptoms and experiencing mortality. It's a lot different than that what we experienced in the years you and I have been paying attention to it."

Naylor said the commission will issue timely information as becomes available. Hunter reports, with photo and video documentation, will greatly aid the flow of information to the public, he added.