Santa’s sleigh in Springdale to take detour for Saturday parade 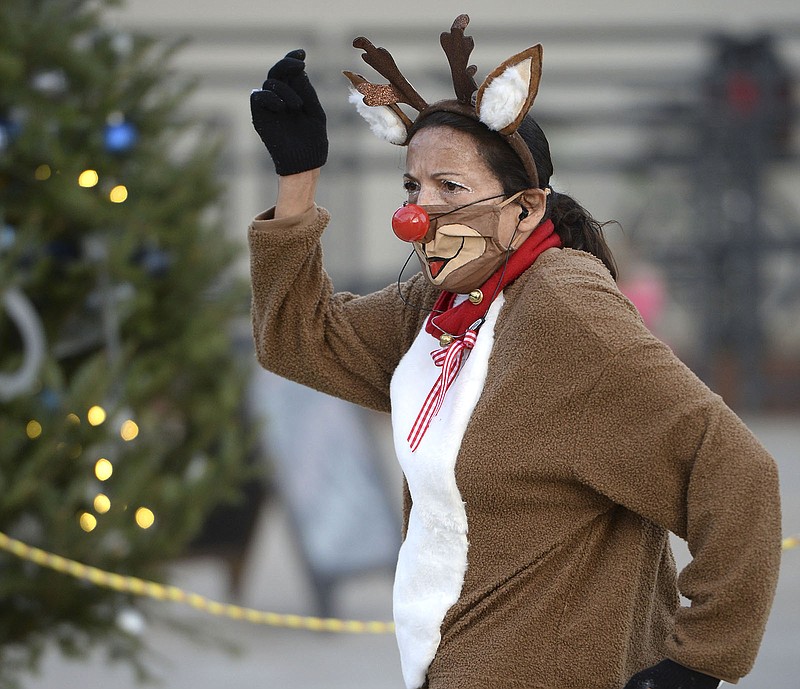 Dancing Vicki dances Nov. 27, 2021 in a Rudolph the Red-Nosed Reindeer costume as she ushers children to see Santa Claus during the Christmas on the Creek celebration in downtown Springdale. The event will take a different this year because of construction on Emma Street. Go to nwaonline.com/221124Daily/ for today's photo gallery. (File Photo/NWA Democrat-Gazette/Andy Shupe)

SPRINGDALE -- The Christmas Parade of the Ozarks will take a slight detour Saturday because Emma Avenue in front of Shiloh Square in Springdale's downtown is closed for construction.

The parade will take the same detour drivers take as they head west on Emma Avenue.

The parade will start at 6 p.m. at Parsons Stadium on East Emma Avenue and Old Missouri Road. It will head west on Emma, turn south on South Commercial Street, turn west on East Meadow Avenue, turn north on Holcomb Street and west again when it reaches West Emma Avenue, according to a map on the Rodeo of the Ozarks' website.

The parade will run Monday if weather causes its cancellation Saturday, said Rick Culver, executive director of the Springdale Benevolent Foundation and the rodeo.

He said the parade has 60 entries so far. Entries will be judged in three categories: commercial, holiday and religious.

The judges also will award a President's Trophy. The group winning the trophy this year will carry Santa Claus along the parade route next year.

The Academy of Dance on Carley Road won last year's prize and will bring the jolly ol' elf through town this year.

The parade organized each year by the rodeo is part of the city's Christmas on the Creek celebration Saturday at Shiloh Square and Turnbow Park with events beginning at 11:30 a.m.

Emma Avenue is closed in front of Shiloh Square, but the sidewalks remain open and visitors can use those to access downtown shops and activities, said Jill Dabbs, executive director of the Downtown Springdale Alliance.

The alliance hosts the annual Hot Cocoa Crawl from 11 a.m. to 5 p.m. in the stores of downtown Springdale. For $10, crawlers will receive a mug and as much hot chocolate as they can drink from participating stores.

The Cycling Santas will host three rides throughout downtown Springdale led by members of the Springdale Bike Club. Rides include the Hot Cocoa ride at noon; the Architectural, New Construction and Art ride at 2 p.m.; and the Downtown Pub and Parade Ride at 3:30 p.m. Rides start in Shiloh Square.

Caroling and the tree lighting ceremony, both in Shiloh Square, run from 5 p.m. to 6 p.m.