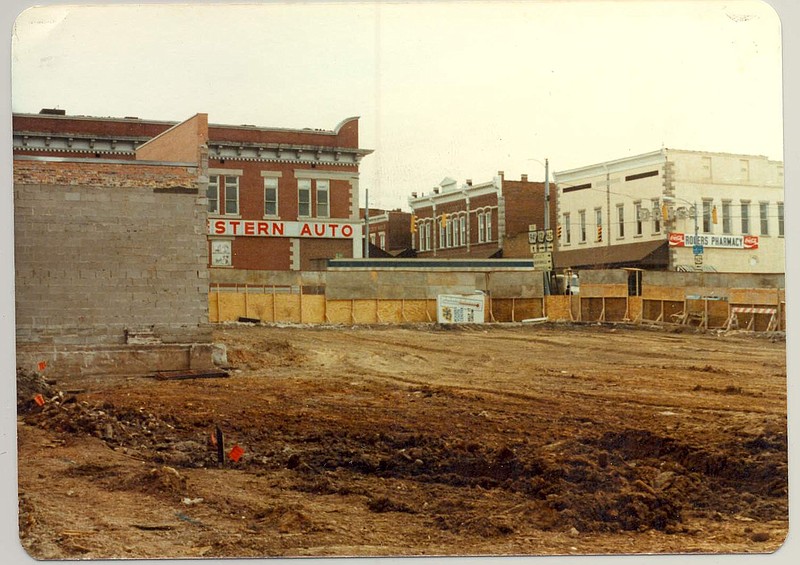 The First National Bank expanded in 1980 to include almost the entire block north of Walnut Street from Second to Third streets. This photo shows the site with the old buildings removed just before new construction of the First National Plaza. (Courtesy Photo/Rob Brothers and Arvest Bank)

Last month, the Remembering Rogers column was about the year 1956, the Diamond Jubilee of the birth of Rogers. This column jumps ahead 25 years to the year 1981 -- the centennial year of Rogers. It is interesting to look back and notice some of the major changes in Rogers and its citizens over that period.

On May 28, 1981, the day of Rogers' birthday, celebrations began with many programs and festivities. At the Frisco Park, Mayor Jack Cole welcomed guests including Gov. Frank White and U.S. Sen. Dale Bumpers, who gave speeches. Tom Batie flew over in his plane, towing a "Happy Birthday Rogers" banner. Mayor Cole presented a specially decorated 100-foot-long birthday cake, and Judge John Jennings gave a special tribute to the founding families of Rogers. Rogers children released 100 red and white helium-filled balloons. Opal Beck, the chairman of the Centennial Commission, presented the deed to Centennial Park to the city of Rogers. The entire park was paid for by donations and activities of the Centennial Commission. The celebrations continued with many events throughout the year, ending with the Christmas parade and a general "Old Fashioned Christmas."

In 1980, the Harold Hawkins family donated their longtime family home, the 1895 Hawkins house at 322 S. Second St., for the Rogers Historical Museum. On July 4, 1981, the Friends of the Museum held a watermelon social to raise money to furnish the newly acquired Hawkins House.

In the 1960s, the nature of shopping and business changed all across the nation, including Rogers. New shopping centers, motels and restaurants were popping up along U.S. 71S (Eighth Street) and West Walnut. The first shopping center in Rogers was Southgate on U.S. 71 South. Southgate Center opened in 1966 and included S.H. Kress Variety Store, Piggly Wiggly Grocery, OTASCO, Bowlin Furniture Mart, IGA Thriftway South, and others.

The Walnut Plaza opened in the early 1970s at the southwest corner of Walnut and Eighth streets. In 1973, Walmart expanded again and moved across the street to the new Plaza Shopping Center. When Walmart moved, "Big Jim" Croxdale and Jimmy Rieff moved their IGA Thriftway Grocery with them to the Plaza Center. Other prominent businesses in the Plaza were Wilson's Department Store, Anthony's, Rice Jewelers, Walsh's Family Fashions, Fun City, and the Malco Twin Cinema. Since the Victory Theater closed in the late 1970s, the Malco was the only theater in Rogers.

About 1979, Rogers' first covered mall opened. The Dixieland Mall was at the corner of Walnut and Dixieland Road. It is my understanding that Campbell-Bell Department Store was already there and became part of the mall. Kmart was the biggest store, but other stores in the mall in 1981 included Bealls Affordable Fashions, Branam's Fashion Clothes, and Zales Jewelry.

Auto dealers started moving from downtown in the 1960s. Randall-Sanders Ford Mercury moved on July 31, 1967, from the original 1947 Hailey Ford Building at 313 S. Second St. to the intersection of New Hope Road and U.S. 71. (In 1981, the restored 1947 Hailey building was the home of the Northwest Arkansas Morning News, and today is the new Rogers Historical Museum.) In 1981, Bob Maloney bought the dealership, and it became Bob Maloney Ford Mercury. The last auto dealership to move out to U.S. 71 was Buddy Sparks Chevrolet-Olds in 1973. Sparks moved from the original McNeil Chevrolet building built in 1930 at 119 S. Second St. (Hickman Printing in 1981) out to 2100 S. U.S. 71.

Even though many businesses moved out west of town along the highways, some stayed downtown and continued to thrive. Stroud's was Rogers' first department store and opened at 104 W. Walnut St. in 1884. In 1981, the prominent store celebrated its 97th birthday and was owned by Betty and Bill Crum and H.K. Scott. The other major department store downtown was Hunt's at the southwest corner of Walnut and First streets. Hunt's, under the leadership of Bob Balch, opened in 1947 and thrived until 1978, when it was damaged by a disastrous fire. Hunt's never recovered their former business and closed on Dec. 31, 1981. In that year, Dixieland Shoes owned by Gene Joyce moved into the vacated building. Opal Beck's Mode O'Day Clothing Store at 110 W. Walnut St. was a stable anchor in downtown Rogers from 1959 until 2003. Next door at 112 W. Walnut St. was Tom & Jerry's Shoes. At 101 E. Walnut St., Jack Parker and his sons, Brent and Bruce, operated the Dollar Saver from 1976 until 2015. (It's now the Onyx Coffee Lab.) Vance Hill's Auto Parts, 101 W. Walnut St., was piled high with new and used auto parts and had a dusty wood floor and narrow aisles. Hill was a familiar figure who owned or managed a store in downtown Rogers since 1935.

This is just a small glimpse of the major changes in Rogers during the 25 years from 1956 until 1981. It is hard to believe our little town grew so much during that short period.

Print Headline: City was growing like crazy when it celebrated 100th birthday in 1981