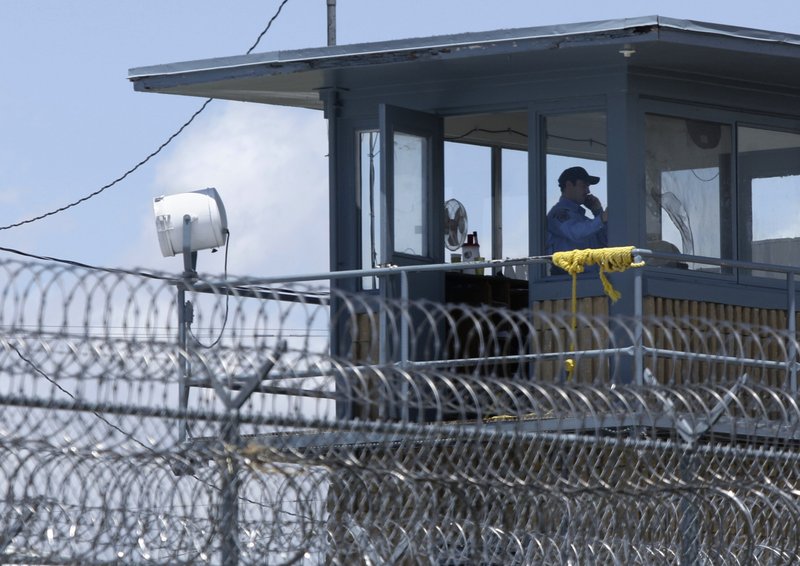 FILE - In this 2011 file photo, a guard sits in a tower at an Arkansas Department of Correction prison. (AP Photo/Danny Johnston, File)

A woman imprisoned for residential burglary is suing the Arkansas Department of Corrections after losing her eligibility for parole.

Kristina Davis is among 290 people currently imprisoned in Arkansas who recently lost their chance at parole, despite what they were told at the time of their plea agreements.

Because of the change in policy, Davis, who thought she was eligible for parole in 2027, will now have to serve the entirety of her sentence which does not end until 2039.

The dispute comes from a 2015 law that reclassified residential burglary as a violent offense. In Arkansas, someone convicted of two violent offenses, also known as "two strikes," is not eligible for parole.

The lawsuit, filed Tuesday in federal court, states that defense attorneys advised their clients based on the understanding from the Department of Corrections that residential burglary offenses before April 1, 2015, did not count as a violent crime.

"Therefore, upon the advice of counsel and based upon the representations made by Defendants, Plaintiff pleaded guilty to the second residential burglary charge, which carried a sentence of 240 months, and for which Plaintiff would be eligible for parole after 60 months, had the Defendants not altered their interpretation of applicable law," according to the complaint filed in the U.S. District Court for the Eastern District of Arkansas.

In the complaint, Davis' attorney David Slade argues the change in interpreting the law is a violation of the ex post facto clause of the U.S. Constitution and the due process and equal protection clauses of the 14th Amendment.

Secretary of the Department of Corrections Solomon Graves told a panel of lawmakers last month the department made a mistake when it told 290 inmates that they could be eligible for parole in contradiction to what they were told at the time of their plea agreements. Additionally, two inmates who were released in June were re-incarcerated, Graves told lawmakers.

The change came after the Arkansas attorney general's office issued an opinion in May saying that residential burglary convictions prior to April 1, 2015, when the Legislature changed the law, should be considered violent offenses.

Graves said he asked the attorney general's office for its opinion after receiving questions about the Department of Correction's interpretation of the law.