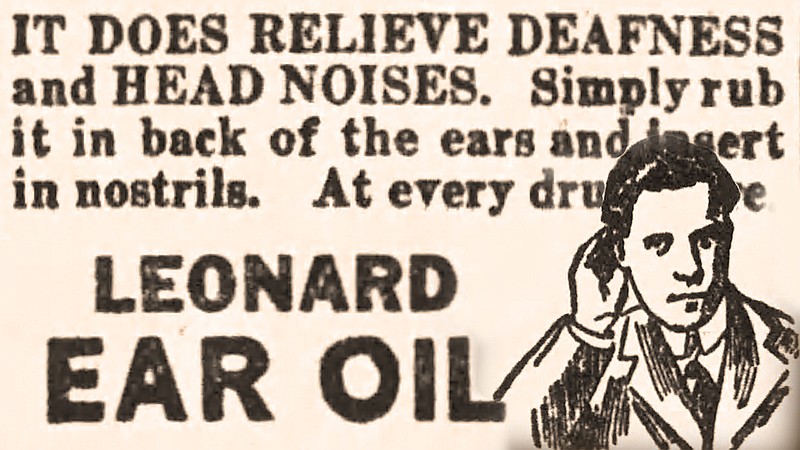 Under the headline "Senator Gets Two Birds With One Shot" was news of a lucky strike by U.S. Sen. Joe T. Robinson.

We all know his name, even if only in connection with the Little Rock concert hall, two Pulaski County schools and the home base of the Arkansas National Guard.

In November 1922, the senator went duck hunting in Arkansas County, where he had a "unique" experience: felling a duck that was dead before he fired. And it hadn't been shot by another hunter.

A bald eagle with a wingspread of 8 feet, 9 inches killed it. And now, the Gazette reported, this eagle was "a rare trophy."

"While Senator Robinson was awaiting the duck flights in a blind near White River, the huge eagle appeared, flying low and with a freshly killed mallard in his talons. When the 'national emblem' came into range, Senator Robinson fired, and both the duck and the eagle dropped to the ground."

Front page of the paper. No mention of fines or outrage.

"The eagle was a perfect specimen and one of the largest seen in the section," the item added. "It was sent to St. Louis to be mounted, and will be added to Senator Robinson's collection of hunting trophies."

How could this be, I wondered. The Migratory Bird Treaty Act had been the law of the land since 1918, had it not? Yes, it had, making it a federal crime to pursue, hunt, take, capture, kill, possess, sell, purchase, barter, import, export or transport any migratory bird, or any part, nest or egg of any such bird, unless authorized under a permit issued by the secretary of the Interior.

Or do they? Turns out, some don't, but others do (see arkansasonline.com/1121bird).

But the key fact here is that eagles were not included as a protected species in 1918. Not until 1940, when Congress passed the Bald and Golden Eagle Protection Act, did it become illegal to pursue, hunt, etc. them. (Later legislation also protects eagles today, and so do workaday American mores. Don't even joke about killing an eagle.)

Coincidentally, a week before that item appeared, the Arkansas Democrat had something similar under the headline "Bald Eagles Very Rare And Getting Rarer." Albert Lano, Bentonville taxidermist, had in hand a "handsome" golden eagle weighing nearly 8 pounds. Lano was mounting it for the University of Arkansas avian collection.

That story concludes, perhaps with a bit of irony: "These birds are rare, but five have been reported killed in Arkansas this year."

Meanwhile at Stuttgart, residents had met en masse to discuss taking drastic action to stop the slaughter of wild ducks in Arkansas County.

"It is estimated that there are more than 500 nonresident hunters in the county," the Gazette reported Nov. 25, "and scores of violations of the game laws have been reported."

Dead ducks were piled up in rice fields "by hunters who are afraid to be caught with more than the bag limit of 50 for two days' shooting. Others cut the heads of the fowls for trophies and leave the bodies to spoil."

A party on Pecan Lake —including a member of the Arkansas Game Commission — had left 700 to 800 ducks behind when it broke camp.

I don't want to oversell the humor or horror, but here are a few other items published 100 years ago this month by the Gazette and Democrat that also made me ask, "What?"

◼️ J.C. Frazier, an undertaker in Mena, was busily embalming "Regal," a 25-foot circus python. The Gazette reported this as the "longest embalming job ever undertaken in Mena."

◼️ An ad for Leonard Ear Oil promised to relieve deafness and "head noises" if you rubbed it on the backs of your ears and "inserted it" in your nostrils. A history blog I like (see arkansasonline.com/1121ear) says the A.O. Leonard Co. product contained camphor, oil of eucalyptus, spirits of ammonia (mixed with the highest grade of mineral oil). Dab that up your nose and enjoy some noise again!

◼️ At El Dorado, an agent for Aetna Life Insurance said the company had denied a policy to an applicant who gave his birthday as Feb. 29, 1900. The reason? No such day.

"Right off the reel," he reported, "you might say that any man should be an authority on the day of his own birth, having attended the affair personally, but when it simmers down, no man has anything more than hearsay evidence on when he was born, and insurance companies evidently do not accept that kind of testimony."

◼️ The Nov. 23 Democrat reported the birth of a baby boy to Mr. and Mrs. Ray Fudge of Zion in Izard County -- at the 11th minute of the 11th hour on the 11th day in the 11th month. His grandfather, the paper reported, wanted him named "Armistice Fudge." And it appears that he was. See arkansasonline.com/1121born. That online memorial notes that the gravemarker for Kenneth Armistice Fudge may have his day of birth wrong, and based upon the Democrat's report in 1922, it seems so.

Just one more item, and please don't expect a howler. It only struck me because I am old enough to remember a mass-poisoning incident in 1982. After receiving free samples of a new dishwashing liquid, Sunlight, about 80 people in Maryland made themselves sick by drinking it, in some cases mixed into iced tea. Well, the label said it contained "real lemon juice." The label also said it was dishwashing liquid, but who reads the fine print?

With that in mind — and remembering that Prohibition was the law of the land in 1922 and the federal government had just closed a loophole by outlawing the sale of nostrums containing significant alcohol — a large ad for something called Tom's Moonshine surprised me.

Moonshine Shoe Polish: "Be Sure It's Moonshine."

It came from Houston. It contained neatsfoot oil. That's a nondrying, yellow oil rendered from cow legs — the shin and foot bones but not the hooves. It can be a machine lubricant and also is used to recondition leather or scaly human skin. Nineteenth-century editions of the Gazette mention neatsfoot oil as a waterproofing treatment for boots. In 1918, you could get some from Little Rock's Gay Oil Co., which specialized in motor fuels but also sold other oils.

I'm going to hazard a guess that the Tom Mfg. Co.'s jocular advertising did it no favors among the prickly pro-Prohibition ladies of Little Rock. Apart from a classified ad for a "high class speciality salesman" to rep the product in Arkansas, I see only two Tom's Moonshine ads in Little Rock newspapers, and precious few in other papers around the region.

All things considered, that's no surprise.

Print Headline: Senator gets two birds with one shot