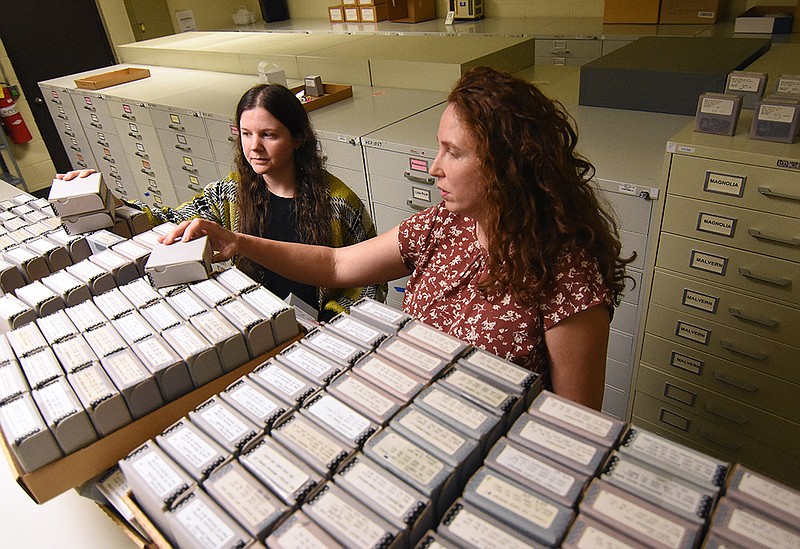 Ever get the urge to read early Arkansas newspapers printed in German?

Or want to see how the state's "longest-running African American-owned and edited paper" covered the civil-rights movement of the 1950s?

Then you're in luck. And you won't even have to hike down to the Arkansas State Archives in Little Rock to spin through reels of microfilm.

Employees of the State Archives have digitized over 240,000 pages of historic newspapers for the Chronicling America project.

So far, select years of 74 Arkansas newspaper titles have been digitized, along with the newspaper of a "free love colony" that moved from Missouri to Arkansas in 1918 and published its final issue in what is now known as The Natural State.

Chronicling America is a website -- https://chroniclingamerica.loc.gov -- that provides free access to information about newspapers published from 1777 to 1963 and select digitized newspaper pages. It is produced by the National Digital Newspaper Program, which is a partnership between the National Endowment for the Humanities and the Library of Congress.

So far, the oldest Arkansas newspaper digitized for the website is the first issue of The Arkansas Advocate, published on March 31, 1830, in Little Rock, six years before Arkansas became a state.

Arkansas began its participation in the Chronicling America project in 2017, after receiving the first of three grants -- totaling over $600,000 -- from the National Endowment for the Humanities to fund three two-year digitization cycles, said Katie Adkins, archivist for the Arkansas Digital Newspaper Project and the state's manager for the National Digital Newspaper Project.

She said the goal is to digitize 100,000 to 110,000 pages in each two-year cycle. Adkins said they'll submit another grant application in January to fund a fourth round of digitization for the 2023-25 cycle, which will begin in September.

Adkins said she and Chelsea Cinotto are the only Arkansas State Archives employees who work full time on the Arkansas Digital Newspaper Project. But other employees of the State Archives provide assistance and guidance. And they have contract staff who speak, write and can translate German.

They've been trying to focus on historic newspapers that aren't already digitized and available for free online. Adkins said they planned to digitize two Fort Smith newspapers but learned that the Fort Smith Public Library had already done that, so they pivoted to the Pine Bluff Daily Graphic instead.

The Graphic tried to keep an eye on Fort Smith anyway. According to an Oct. 2, 1893, front-page headline in the Graphic, "Three Desperados, Armed with Iron Spittoons and Water Jugs, Attempt to Break Jail at Fort Smith."

One of the "desperados" was Henry Starr, who had a brief stint as a silent film star before being mortally wounded in 1921 when he and three others robbed the People's National Bank of Harrison.

What you won't find digitized at https://chroniclingamerica.loc.gov -- at least for now -- is the Arkansas Democrat and Arkansas Gazette. (They may be included in the future.)

But you will find the Stuttgart Germania, the Paragould Soliphone and The Huttig News.

Many of the Arkansas newspapers that have been digitized for the project are no longer in business.

"Most of them are long closed down," said Adkins.

The majority of Arkansas newspapers digitized for the project were published before 1927, said Adkins. For newspapers published over 95 years ago, efforts don't have to be made to make sure anything in the paper is still covered by copyright.

"We can include any paper up to 1963; however we must do copyright research," said Adkins.

David Ware, director of the Arkansas State Archives, said the current two-year digitization cycle is of particular interest because it includes the Arkansas Echo, one of two long-running German-language newspapers published in Little Rock, and the Arkansas State Press, "our state's longest-running African American-owned and edited paper."

Ware said the Arkansas State Press was the "backbone and real-time chronicle" of the state's civil-rights history in the 1950s.

The Arkansas State Press was founded in 1941 by civil-rights pioneers Lucious Christopher Bates and Daisy Gatson Bates, according to the Encyclopedia of Arkansas.

The Arkansas Digital Newspaper Project includes the entire run of the Arkansas State Press' published issues from 1941 until 1959, when it went out of business the first time.

Ware said it's a significant time period in civil-rights history. It includes the Supreme Court's 1954 Brown v. Board of Education decision and the desegregation of Little Rock's Central High School in 1957.

"In the case of the Echo, it was complicated by the fact that the paper's in German," said Ware, noting that the Echo used a typeface known as fraktur.

Almost all of the Arkansas newspapers are being digitized from microfilm that was already at the State Archives.

Adkins said the State Archives had the entire run of the Echo on microfilm, but some of the microfilm wasn't up to the standards required by the National Digital Newspaper Program.

Luckily, the monks at Subiaco Academy still had the print editions of those newspapers. The monks provided the State Archives with those old Echos so they could be digitized.

Adkins said the archivists also clean up the microfilm during the digitization process, eliminating duplicate pages and reorienting upside-down pages.

She said Arkansas is the only state so far to digitize a newspaper -- De Queen Bee -- that included columns in Choctaw. The newspaper also included an English translation.

Adkins said https://chroniclingamerica.loc.gov is particularly useful because it's a searchable database that uses optical character recognition.

She said the newspapers being digitized have been available to the public on microfilm, but people had to go to the Arkansas State Archives to view them.

That's changing as more of the newspapers are being digitized.

"You can sit in your house and search them," said Adkins."You don't have to come here to look at them. And you can do it for free. It makes research so much easier. Digitizing these newspapers essentially dusts them off and puts them at the hands of researchers so they can be used as they were intended."

Efforts are made to include a diverse group of newspapers that represent all corners of the state.

"We're trying to tell the story of Arkansas through the newspapers and it's not a complete story if you don't tell it through different perspectives," said Adkins.