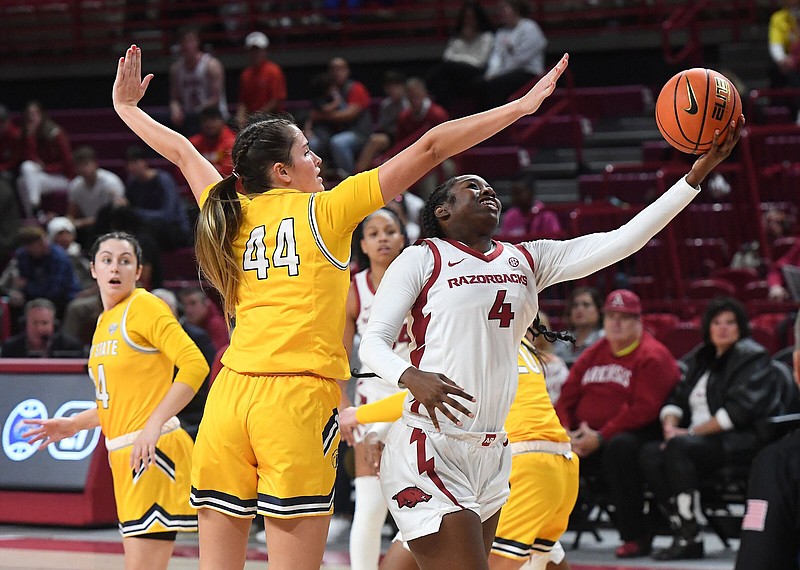 Arkansas’ Erynn Barnum (4) puts up a shot in front of Kent State’s Lindsey Thall on Thursday during the Razorbacks’ 80-59 victory at Walton Arena in Fayetteville. Barnum finished with 20 points and six rebounds. (NWA Democrat-Gazette/J.T. Wampler)

FAYETTEVILLE-- Mike Neighbors logged his 100th win as head coach of the University of Arkansas women's basketball team Thursday night as his team knocked off Kent State 80-59 at Walton Arena.

Arkansas (4-0) led by as many as 27 points and shot 45.5% from the floor. The Razorbacks finished with 19 assists, scoring 38 points in the lane. Neighbors said his team played its best game yet this season.

"I'm proud of everybody," Neighbors said. "I thought everybody played good. They [Kent State] are a really hard team to prepare for, especially on one day's prep. The way the calendar fell with who we've played and what we have coming up, the off day had to come the day before yesterday. I thought our attention to detail, our focus, that was without a doubt our most complete game so far."

The Razorbacks shot well from the game's first tip. Arkansas shot 50% in the first quarter, during which six different Hogs scored, including Samara Spencer, who finished with a game-high 22 points.

The sophomore guard was 8-of-13 shooting, hitting 3 three-pointers on 6 attempts.

"A lot of our teammates are willing to pass up an open shot for themselves to get others involved," Spencer said. "I just feel like with us being in the right spots at the right time, flowing in our offense, it just opens the floor up for so many other people. It's easy to find them when they're in the right spot."

"I wish I had her on my fantasy team tonight," Neighbors said.

Arkansas scored 20-plus points in back-to-back quarters for the first time this season and led 46-29 at halftime. Senior forward Erynn Barnum scored nine of her 20 points in the second quarter.

"I love how aggressive she's playing," said teammate Chrissy Carr, who chipped in 12 points. "She's playing super tough around the paint and getting offensive rebounds. And it's something where you look up, she gets a couple layups, and you look up [again] and she has 20-plus points. I'm proud of the way that she's playing."

The Razorbacks outscored Kent State by four points in the second half, cruising to the 21-point win.

The victory made Neighbors one of four coaches in school history to reach the 100-win milestone. Now in his sixth season at the helm, he was quick to credit all the teams that helped him reach the mark.

"I think to get to 100 is a good indicator of what our kids have done," Neighbors said. "Our staff has worked hard, because we don't schedule easy. You look at who that 100 is [against]. There's a Baylor in there, there's a UConn in there."

The win gave Arkansas its best start since 2019, when the Razorbacks began with a 5-0 record. 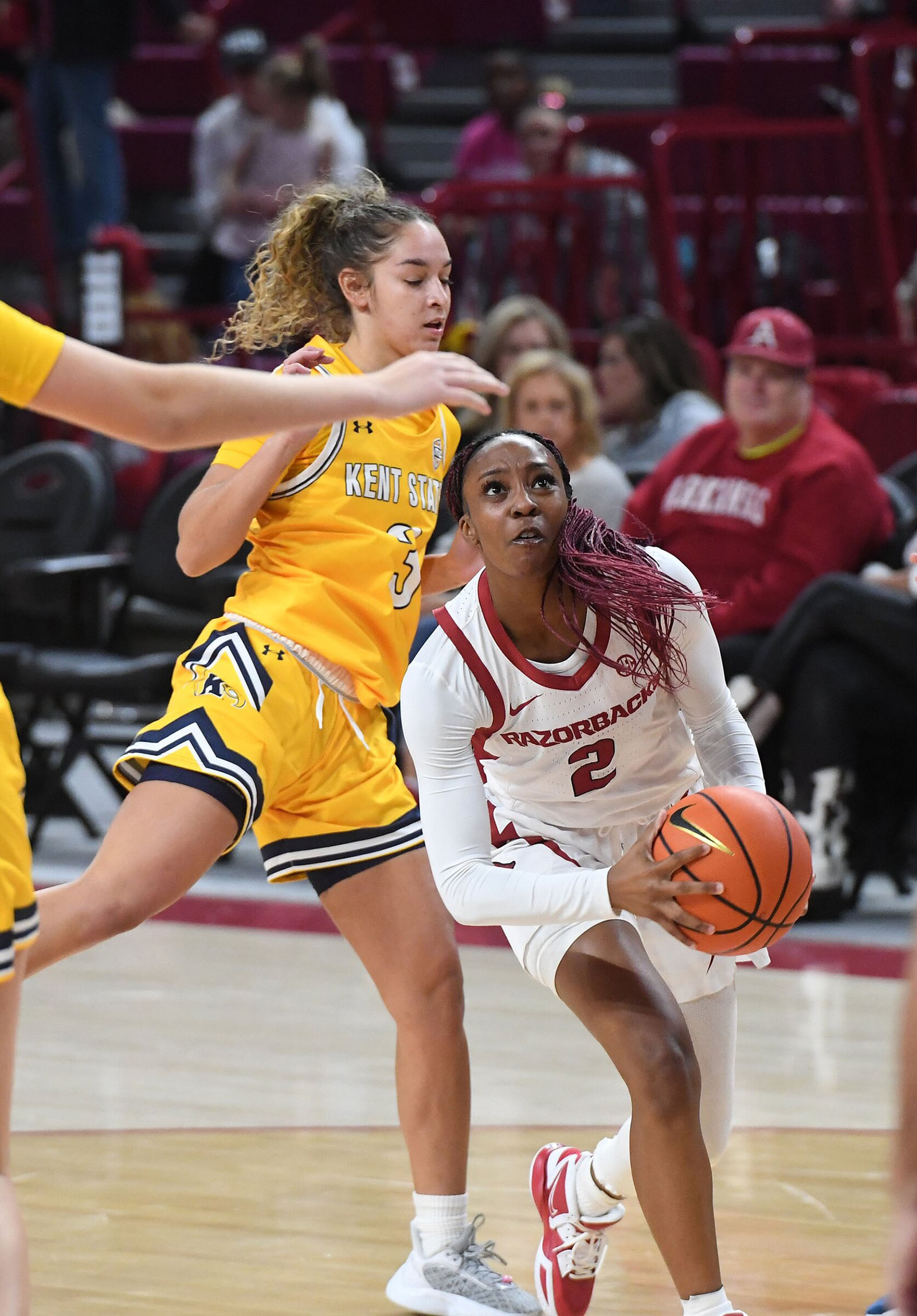 Arkansas’ Samara Spencer (2) looks to shoot in front of Kent State’s Corynne Hauser on Thursday during the Razorbacks’ 80-59 victory at Walton Arena in Fayetteville. Spencer had a game-high 22 points on 8-of-13 shooting from the floor, including 3-of-6 shooting from the three-point line. (NWA Democrat-Gazette/J.T. Wampler)