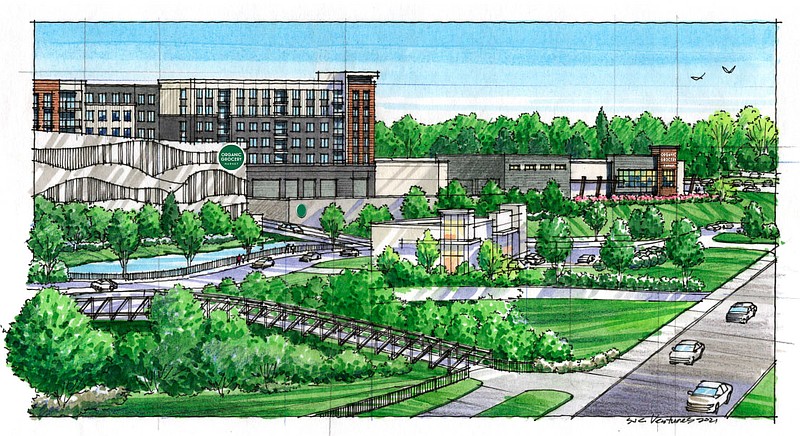 This rendering shows plans for Whole Foods Market, as well as a surrounding shopping center and apartment complex, in Rogers. The grocery store is on track to open in late 2024, according to a representative of SJC Ventures. (Courtesy Photo/SJC Ventures)

A planned mixed-use development in Rogers will combine the organic grocery store with a shopping center and apartment space near the corner of Promenade Boulevard and New Hope Road.

The project's estimated opening is in late 2024, according to a representative of the developer, Atlanta-based firm SJC Ventures.

SJC Ventures was also responsible for the Whole Foods Market in Fayetteville. The only other Whole Foods store in Arkansas is in Little Rock, according to the company's website.

The city of Rogers has approved two rezonings for the developer over the last several months, though SJC had not previously announced what grocery store would anchor the shopping center.

The first rezoning was for 12.25 acres at 1750 and 1800 S. Osage Springs Drive, northwest of the intersection of Promenade and New Hope. The second involved the 8.67-acre empty lot east of Home Depot and between Seminole Drive and Seneca Road.

The shopping center will include 80,498 square feet of retail space -- a 37,009-square-foot grocery store and four shop buildings totaling 43,489 square feet -- and 350 apartments, according to plans by the firm.

The representative declined to comment on the specific plans for the empty lot east of Home Depot.

Before any construction begins on the project, a large-scale development plan will have to be approved by the city.

The limited lunch hours are a part of a phased opening, according to the restaurant's social media posts.

The road in front of the restaurant is currently closed, but visitors can find parking behind the business.

Salata Salad Kitchen is planning to open a location in Fayetteville.

The Houston-based fast casual chain has more than 80 stores across the United States.

The restaurant's menu primarily includes customizable wraps and salads, with more than 50 toppings and a variety of dressings available.

The Salata concept began in downtown Houston and has grown with franchise partners in other parts of Texas, Georgia, California, Louisiana and North Carolina.

The Farmer's Table Cafe in Fayetteville, a popular brunch spot, has offered some unique dinner specials over the last few months. Weekly offerings have ranged from Greek and Polish cuisine to barbecue and meatloaf.

Of course, the restaurant continues to partner with farmers to bring locally sourced ingredients to the cafe, even if the inspiration comes from around the world.

Farmer's Table is open at 1079 S. School Ave. from 7 a.m. to 3 p.m. Tuesday through Sunday with additional dinner hours from 5 to 9 p.m. Friday and Saturday.

We all love eating out. What restaurants have you been thankful for this year? In a paragraph or two, tell us what you love about your favorite restaurant. Email [email protected], and your answer could be featured in an upcoming column.