PREP FOOTBALL: Bentonville’s Tomescko makes most of his position change from receiver to defensive back 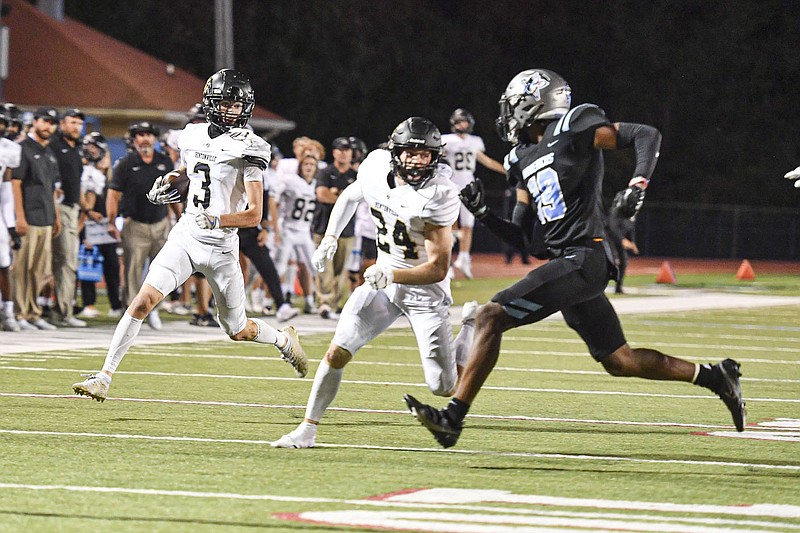 BENTONVILLE -- J.T. Tomescko admits he was a little apprehensive when Bentonville football coach Jody Grant approached him last year about a switch from wide receiver to defensive back.

The senior now cherishes the position and has not only emerged as the leader of the Tigers' secondary, but he also contributes to the team in a number of other positions.

"At first, I was a little uneasy about it," Tomescko said about the change. "My heart is into scoring touchdowns, and I loved to play receiver. But when he gave me an opportunity to get on the field faster, I loved that idea and I'm willing to do what it takes to make the team better.

"When I started playing DB, I thought it was hard -- probably one of the hardest positions to play on the field because you don't know what they are doing. You just have to match their movements and be able to run with them. Now I'm more comfortable with my position."

Grant said the original plan when Tomescko joined the team as a sophomore was to have him play receiver, and he found a spot in what Bentonville calls its "10" personnel. He caught nine passes for 72 yards in the time he played offense.

But as the Tigers headed into the following offseason, more receivers emerged and made the position a little crowded. That's when Grant thought it was time for Tomescko to make the change.

"We knew he was a kid we had to find a place for on the field consistently," Grant said. "We knew it was a talented football player, so we proposed to him maybe a move to corner with still the ability to play some at receiver.

"He started at corner and sprinkled him in some at receiver, and it worked out well. Now, to me, he's become one of the most dominant corners in our league. He's continually making plays and does a good job in coverage. He understands our scheme. Truthfully, he's done everything we've asked him to do."

Just because Tomescko (6-foot-2, 175 pounds) has switched positions doesn't mean he still wants to score touchdowns. Because he doesn't get the opportunity to touch the football as much these days, it makes him want to score even more when the opportunity presents itself.

He almost did it in Bentonville's season opener against Broken Arrow, Okla., when he intercepted a pass and raced 63 yards to the end zone, only to have part of the return negated because of a penalty. He had another interception in the Tigers' win over Kansas City Rockhurst and missed a touchdown by just 4 yards.

"When I caught that ball, all I thought was 'Touchdown, touchdown. I gotta score,'" Tomescko said. "I think every time I touch the ball this season, that's the only thing on my mind. Even if it means running across the field, all the way around. I want to do anything it takes to help the team win the game, for sure.

"On Rockhurst, I was playing cover-2 and I was playing both receivers. When I saw the ball was thrown, I just sprinted to the ball and ran up and caught it. I tried my best to get in, but I just fell short again. Hopefully in the playoffs, I can get one and try to do it again."

The position change has helped Tomescko toward his future in football. He received an offer from Air Force and made a verbal commitment to the Falcons in the summer.

He's not decided when he will sign his national letter of intent since Air Force doesn't have an early entry like many colleges do. It will allow him to stay at Bentonville, where he will work on being strong and run with the track team.

"To me, that's one of the most prestigious universities there is," Grant said. "The longevity of success from those guys that graduate from there is phenomenal.

"I'm an advocate of that place only because my older stepbrother is a graduate of the Air Force Academy, and both my father and stepdad were in the military so I'm a huge advocate for that. It will be a interesting process, and he knows it won't be easy but it's something he's excited about."