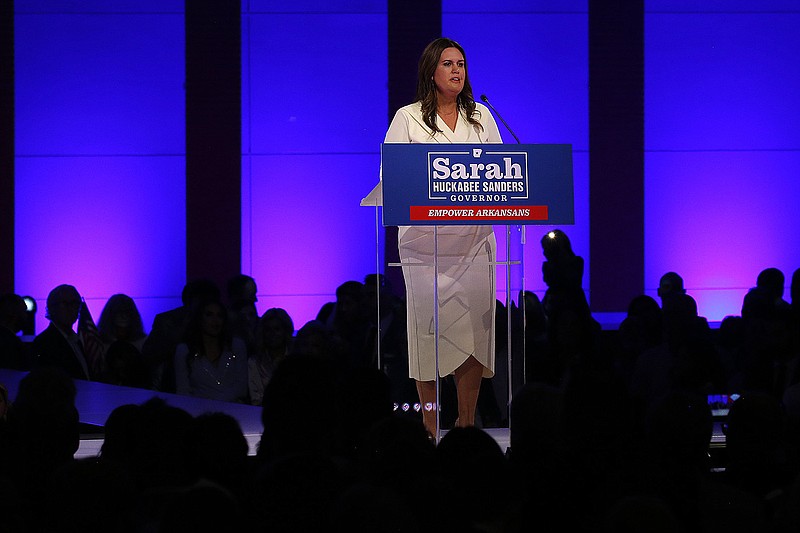 “I know it will be the honor of a lifetime to serve as Arkansas’ 47th governor and the first female governor of the state,” Sarah Huckabee Sanders said Tuesday night at the Statehouse Convention Center in Little Rock. (Arkansas Democrat-Gazette/Thomas Metthe)

"The math is clear and the results of the race are clear," Jones said in a written statement released shortly before noon Wednesday.

Arkansas was poised to make history no matter the results as the state would elect either its first Black person as governor or the first female governor, he said. Jones, of Little Rock, and Libertarian candidate Ricky Dale Harrington, Jr., of Pine Bluff, are Black.

"History was made," Jones said. "Sarah's election has shown women, including my little girls, that being a woman is no longer a barrier to becoming governor in our state."

He said while he and Sanders disagreed on the issues, "there is no denying Sarah's love for Arkansas."

"I believe, as I have always believed, that we must come together for the sake of Arkansas," said Jones, a former executive director of the Arkansas Regional Innovation Hub. "Sarah and her family will remain in our thoughts and prayers, and I urge everyone to give her the chance to succeed and make Arkansas a better place for all."

Sanders spokesman Judd Deere said Wednesday in a written statement, "The Governor-elect spoke by phone with Chris Jones this morning.

"They had a nice visit, and she is appreciative of the call."

Asked whether he talked with Sanders on Tuesday night or Wednesday morning, Harrington said Wednesday, "I haven't had the opportunity, but all the best to her these next four years."

On Tuesday night, Sanders thanked Jones and Harrington in her remarks before an estimated 1,500 people at the Statehouse Convention Center in Little Rock.

"One of the most amazing things about tonight is that no matter how it turned out Arkansas was going to make history tonight," Sanders said. "I know it will be the honor of a lifetime to serve as Arkansas' 47th governor and the first female governor of the state."

With 97.33% of the state's areas reporting results, Sanders had 566,756 votes for governor, compared to Jones' 314,762 and Harrington's 16,554, the secretary of state's office reported Thursday in unofficial results.

Sanders' father, Mike Huckabee, served as Arkansas' Republican governor from July 1996-2007 and tweeted that Tuesday night was a special night with Sanders winning in a landslide.

Huckabee said Wednesday in a text message to the Arkansas Democrat-Gazette that "Sarah's election is historic in several way[s], but the important history is the way she leads Arkansas forward with competence and compassion.

"I am confident she will satisfy those who voted for her and surprise those who didn't," he said.

Sanders is the first daughter of a former governor elected to fill the position formerly held by her father in the United States, said Chelsea Hill, data services manager for the Center for American Women and Politics, which is part of the Eagleton Institute of Politics at Rutgers University-New Brunswick.

She also is a former White House press secretary for President Donald Trump.

The Center for American Women and Politics reported Wednesday that at least 12 women will serve as governors in 2023, eclipsing the previous record of nine first set in 2004.

Arkansas Lt. Gov.-elect Leslie Rutledge, who is the state's first woman elected as lieutenant governor, said Tuesday night she and Sanders will be the first women in the history of the United States to be independently elected to the offices of governor and lieutenant governor of a state.

Four states had women in the same party running for both governor and lieutenant governor in Tuesday's election. The women won both posts in Arkansas and Massachusetts, but lost both posts in Oklahoma and Ohio, Hill said.

The female candidates for governor and lieutenant governor in Massachusetts successfully ran together on a party ticket, she said.

"Governor Hutchinson congratulated the governor-elect on her historic victory and committed his administration to full cooperation with her and her team to ensure a seamless transition," Deere said in a written statement.

"Governor-elect Sanders thanked the governor for his years of service to Arkansans, his support during the campaign, his hospitality, and for his assistance to ensure an orderly transition," he said. "With this being Arkansas' first Republican to Republican gubernatorial transition, the two agreed that it presents incredible opportunities to continue to move the state forward and unleash new, bold reforms. The governor and governor-elect agreed to stay in regular contact and for their staffs to begin the work of a transition immediately."

Hutchinson has served as governor since 2015, and has said he's considering a potential bid for the Republican nomination for president in 2024. Sanders is scheduled to be sworn in as Arkansas' 47th governor Jan. 10. 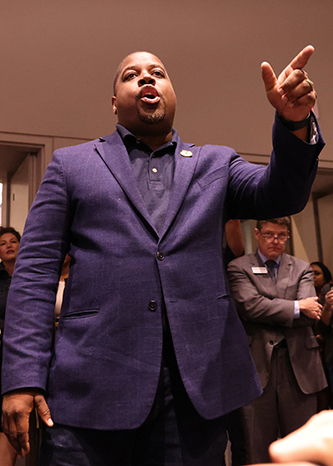 Chris Jones addresses supporters Tuesday night in Little Rock. In a statement Wednesday, Jones said everyone “must come together for the sake of Arkansas.” (Arkansas Democrat-Gazette/Colin Murphey) 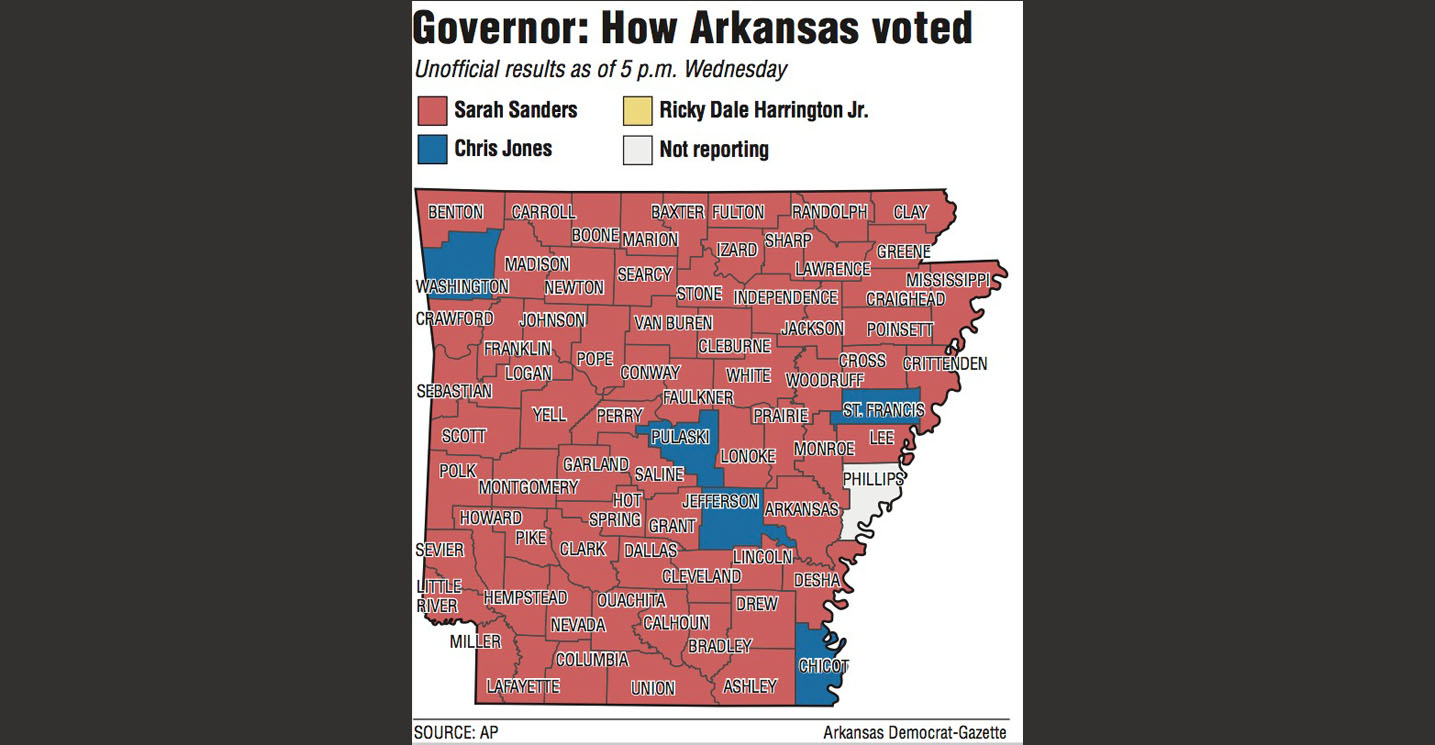