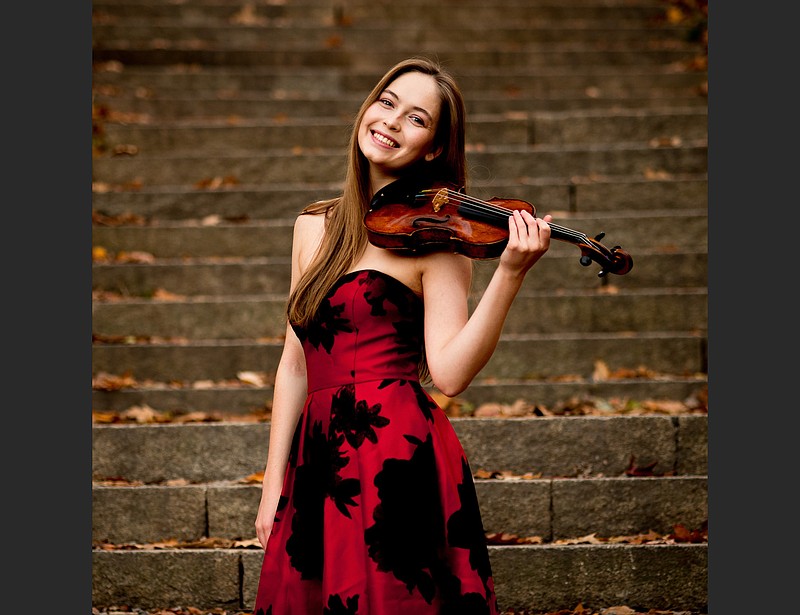 Felix Mendelssohn's Violin Concerto is one of the most frequently performed works in the repertoire, so most violinists might have to consider how to make it fresh for audiences.

Violinist Geneva Lewis doesn't have that problem. She learned the piece as a student, of course, but this will be the very first time she'll be playing it in its entirety, all the way through, with an orchestra.

The orchestra is the Arkansas Symphony. The guest conductor, making his second appearance with the orchestra, is Stephen Mulligan. The concerts this Saturday and Sunday at Little Rock's Robinson Center Performance Hall are the second set in the orchestra's 2022-23 Stella Boyle Smith Masterworks season.

"I'm playing it a few times this season," Lewis says of the e-minor concerto, "but Arkansas will be my first, and it's the first time I'll have played the whole concerto with an orchestra. I played the first movement alone when I was younger.

"It's one of my favorite pieces; it has a whole lot of surprises that I'll find out at the time" when she plays it with a full band behind her, she says. "And I'll be glad to play it with such a fantastic orchestra."

Lewis, 24, studied with Miriam Fried at the New England Conservatory of Music, which is lending her her current violin, the so-called "Joachim-Ma" Stradivarius, which the famed Cremona, Italy, luthier made around 1714. The name comes, in part, from one of its famous former owners, Joseph Joachim, one of the most famous violinists of the mid- to late 19th century and a friend and colleague of Johannes Brahms. (Lewis' "usual" violin was also built in Cremona by Zosimo Bergonzi, circa 1770.)

Though it'll be her Arkansas Symphony and Little Rock debut, it won't be her first Arkansas performance — she teamed up with cellist Gabriel Martins to play works by Maurice Ravel, Zoltan Kodaly and Hector Villa-Lobos in a January recital at Harding University in Searcy.

"We had a great time there," she recalls.

She also recently (Oct. 15) paired with Martins to play Brahms' "Double Concerto" for violin and cello with the Gulf Coast Symphony in Gulfport, Miss. They've played the piece together a couple of times previously and will again in February with the South Florida Symphony in Fort Lauderdale and Key West. (The finale for that concert, by the way, as with this one, is Jean Sibelius' Symphony No. 5.)

Also in February, Lewis, a New Zealand native, will play Samuel Barber's Violin Concerto with the Auckland Philharmonia. "It'll be my first time going back to New Zealand since my family left in 2005," she says. She was 7 at the time.

She and her family now make their home in Charleston, S.C. She reports they suffered "no major damage" from Hurricane Ian. 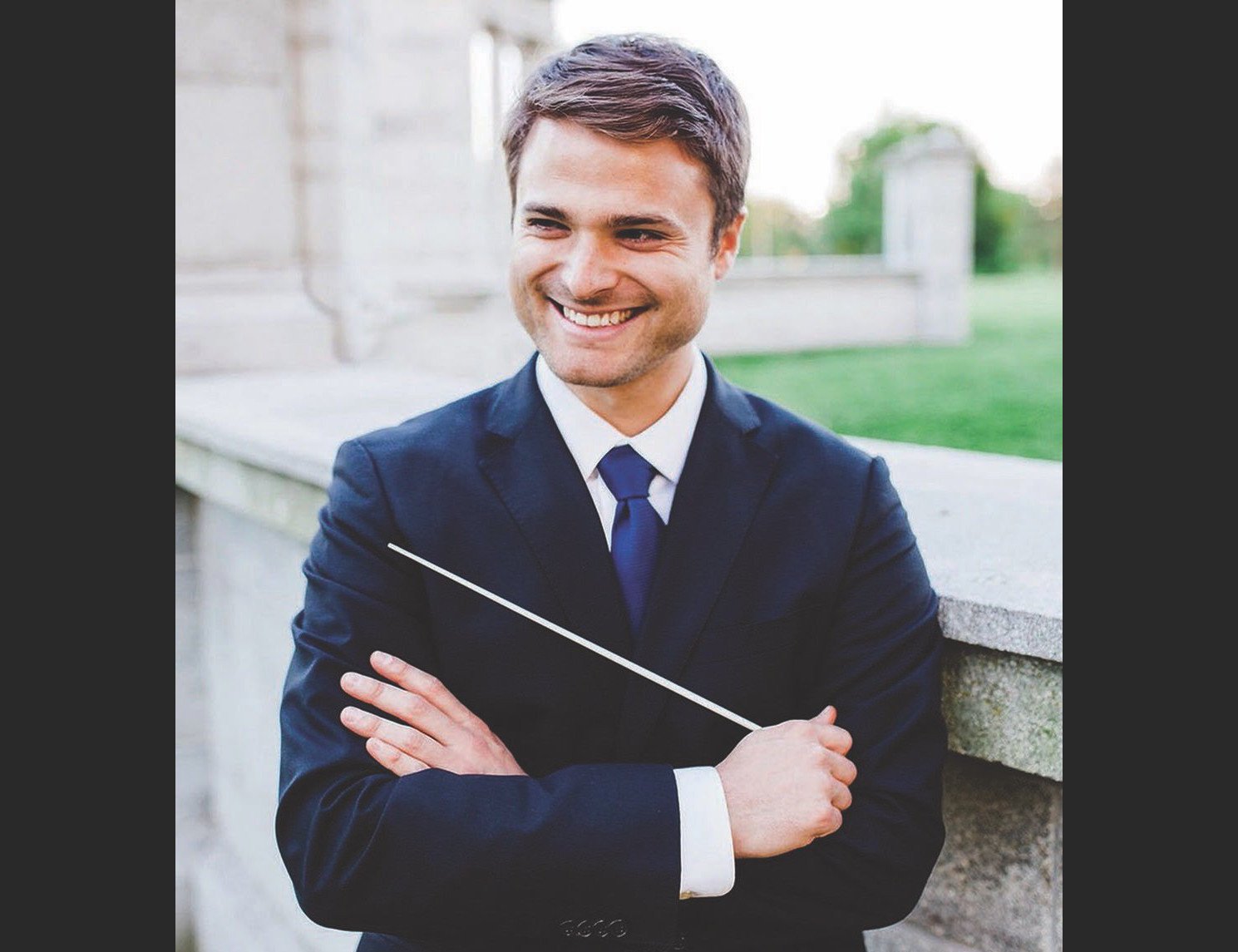 Conductor Stephen Mulligan makes his second appearance with the Arkansas Symphony in concerts Saturday and Sunday at Robinson Center Performance Hall. (Democrat-Gazette file photo)  Mulligan, associate conductor of the Atlanta Symphony Orchestra and music director of the Atlanta Symphony Youth Orchestra, says he's working this time with a program that was "given to me by the orchestra," not one of his own. But he says Sibelius' Fifth Symphony is "one of my all-time favorites," noting that he wrote his senior thesis on the Finnish composer. His research included a trip to Sibelius' home, Ainola, in the town of Jarvenpaa, Finland, north of Helsinki.

"I hopped the fence," he admits. Later he learned that one of his mentors, Atlanta Symphony Orchestra music director laureate Robert Spano, had once done the same thing.

He calls the symphony "a difficult piece rhythmically" with a tricky finale that keeps the audience in suspense as to when it actually ends.

The concert opens with the premiere of "Beyond Sensorial Portals" by James Lee III, a co-commission by Arkansas Symphony, the Colorado Symphony and the Orlando Philharmonic.

The Florida orchestra had been scheduled to give the piece its world premiere in early October to mark the opening of its new concert space, Steinmetz Hall, but Hurricane Ian forced a postponement of the concert, so it'll receive more or less simultaneous premieres this weekend in Orlando and Little Rock. Eric Jacobsen is conducting it in Orlando.

Mulligan says he'll get a chance to consult on the piece with the the composer, who will be shuttling back and forth this week between Florida and Arkansas. "We changed our rehearsal schedule to accommodate him," he adds.

Lee, a Michigan native who teaches at Morgan State University in Baltimore, describes the piece in his program notes as "a rhapsodic orchestral work that can also be summarized with one word, celebration! ... The title of the work is inspired by the idea of concertgoers anticipating going to an orchestral concert and hearing great music."

The orchestra is being somewhat coy about its 2022-23 Masterworks lineup being essentially the last part of the audition process in its long, pandemic-interrupted search for a permanent music director to replace Philip Mann, who departed the podium at the end of the 2018-19 season.

However, four of the season's five guest conductors are making second appearances. And all of them, as well as Robson, appear to be still under consideration for the full-time job.

"I'm very grateful," Mulligan says. Being named music director of the Arkansas Symphony, he adds, "would be a dream come true."

"It was a fun week," he says of the Sept. 29-30, 2021, concerts in which he led the orchestra in the 1919 version of Igor Stravinsky's "Firebird" Suite and, with cellist Martins, Robert Schumann's Cello Concerto. The program also included "The Chairman Dances: Foxtrot for Orchestra" by John Adams and Maurice Ravel's suite "Le Tombeau de Couperin," with, to the audience's delight, an additional movement that Mulligan himself orchestrated from the composer's piano version.

The Arkansas Symphony is partnering with Arkansas Foodbank on a food drive. Patrons who bring a donation of at least 12 non-perishable food items to this weekend's concerts will receive a voucher good for a pair of tickets to a future concert. Visit ArkansasSymphony.org/food-drive.