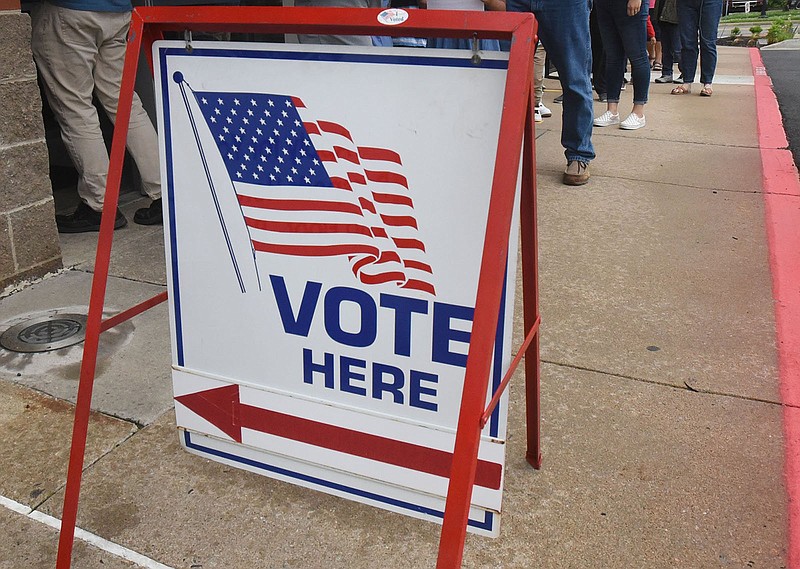 Returns on Tuesday evening showed Arkansas voters poised to reject an amendment to the state constitution increasing the threshold needed for voters to pass future laws or constitutional amendments from a simple majority to 60%.

Constitutional amendments on religious freedom and the ability of the Legislature to call itself into special session also appeared to be headed toward defeat.

For the amendment to change the threshold to pass ballot questions, also known as Issue 2, available returns showed voters making a statement in rejecting a proposal to make changes to state law harder for voters to pass.

With 73% of the vote counted, unofficial returns Tuesday were:

The GOP-controlled state Legislature put Issue 2 on the ballot.

The campaign for the amendment took a back seat to the proposed amendment on recreational marijuana, which captured most of the attention in ads and spending. But for some politicians and activists, the Issue 2 campaign became a high-stakes one.

"We have a long history of supporting direct democracy; it's really important to Arkansans," Miller said. "Arkansans know better, we are smart and we could see them trying to pull the wool over our eyes."

Republican state Rep. David Ray of Maumelle led the campaign in favor of the amendment, saying it was a needed check on an amendment process gone too far. Unlike the U.S. Constitution, which has been only amended 27 times, the Arkansas Constitution has been amended 102 times.

"Tonight's results are disappointing, and there's no doubt that the hundreds of thousands of out-of-state, liberal ad dollars deceived voters about what Issue 2 would actually do," Ray said in a statement. "But this setback is only temporary. I will be working on legislation in next January's session to reform our initiative system to protect it from further abuse."

For supporters of Issue 2, like Ray, the amendment is not an end to voter-led ballot initiatives, but rather a conservative approach to constitutional changes. They argue broad support -- at least 60% -- should be needed for voters to change the law themselves. Defend AR Constitution, led by Ray, and Protect Our Constitution led the campaign for the amendment.

Those against Issue 2 said the proposed amendment was an attempt by politicians to change the rules because they don't support recent citizen-led ballot initiatives.

Protect AR Rights and Protect AR Constitution led the campaign against Issue 2, raising roughly $860,000 combined. Both groups were backed by $75,000 donations from the teachers union National Education Association. Over the years, Arkansas voters have made changes to the state's constitution through several key ballot initiatives, including the legalization of medical marijuana and raising the state's minimum wage.

"What I'm hoping is what we see after this is that politicians get the message loud and clear that direct democracy is extremely important to Arkansans and [they] are not going to vote away their power," Miller said.

Returns reported Tuesday evening showed voters rejecting Issue 1, which would have allowed the state General Assembly to call itself into special session.

With 73% of the vote counted, unofficial returns were:

Under the Arkansas Constitution, in odd-numbered years lawmakers meet for a regular session that begins in January and typically lasts into the spring. A fiscal session is held every even-numbered year, typically a shorter session where lawmakers focus on appropriation bills.

Outside of its regular and fiscal sessions, the state Legislature can only meet when the governor calls lawmakers back to the state Capitol to consider a specific list of issues.

The state Legislature referred the amendment to the ballot, with Sen. Breanne Davis of Russellville and Rep. Frances Cavanaugh of Walnut Ridge, both Republicans, sponsoring the bill in the House and Senate.

With 87% of the vote counted, unofficial results were:

The amendment would prohibit state and local governments from burdening people's ability to practice their religion unless there is a compelling reason to do so.

It was put forth by the Arkansas General Assembly, with Sen. Jason Rapert of Conway and Rep. Jimmy Gazaway of Paragould, both Republicans, sponsoring measures in the House and Senate to recommend it to the voters. The amendment also had the backing of many conservative religious groups around the state who argued the state's constitution needed more protections after government-instituted church closures during the covid-19 pandemic.