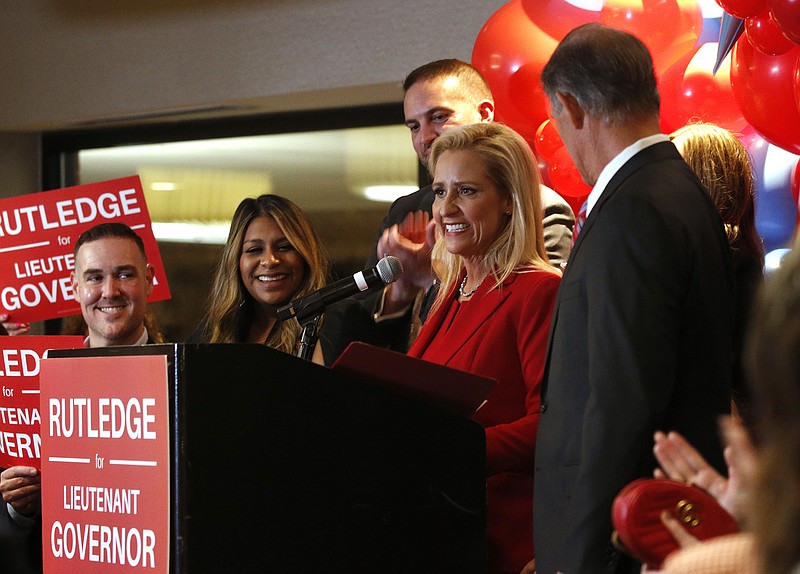 With 53% of the votes counted, unofficial returns in the lieutenant governor’s race were:

With Republican Sarah Huckabee Sanders’ winas the first woman to be elected Arkansas governor, Rutledge said she and Sanders will be the first women in the history of the United States to be independently elected to the offices of governor and lieutenant governor of a state.

“I’m honored that Arkansans have again placed their trust in me for a third time to continue to lead our great State forward,” she said in a news release.

Rutledge, 46, said she’s excited to see Sanders, her longtime friend, follow in the footsteps of her father, former Gov. Mike Huckabee, and “I wish her and her new administration great success and I look forward to working with her in the days to come.”

Krout, a licensed social worker, said in an interview that “we have put it out there” and “we are very proud of the campaign.”

“We gave people an option,” she said.

Gilbert, who is retired and a former mayor of Tull, said he’s excited to see the final results.

Rutledge of Maumelle, Krout of Lowell and Gilbert of Little Rock vied for state government’s second-ranking elected post, which is considered part-time and carries a state-paid salary of $46,704 a year.

Republican Tim Griffin of Little Rock has served as lieutenant governor for the past eight years and was elected Tuesday to a four-year term as attorney general.

Under the Arkansas Constitution, the position’s duties are to preside over the 35-member Senate with a tie-breaking vote and to serve as governor if the state’s chief executive is impeached, removed from office, dies or is otherwise unable to discharge the office’s duties.

Two of the state’s governors during the past 30 years were lieutenant governors first.

Rutledge has served as the state’s attorney general since 2015.

In July 2020, she initially announced her bid for the Republican nomination for governor. In November 2021, she abandoned the governor’s race to run for lieutenant governor instead.

During her campaign for lieutenant governor, Rutledge said she wants to be known as the economic ambassador for Arkansas to help Sanders create more jobs in the state.

She also said she wants to work with others to phase out the state income tax, roll back state regulations, provide more school choice and more opportunities for workforce development to enable high school graduates to go directly into the workforce, and protect the state’s conservative values.

During the campaign, Krout said her top priorities would include bringing more awareness to the foster care system and advocating for more resources to better take care of families and children before they need the system as well as for more foster homes and beefing up protective services.

She said she also would advocate for changing state law to allow for abortions in case of rape and incest as a first step. Rutledge said “that’s going to be a decision for our Legislature.”

Gilbert described himself as “pro-life” but said he’s not comfortable with only allowing abortions to save the life of the mother in a medical emergency.

Krout described herself as advocating for proactive policy and claimed that a lot of what Rutledge talks about benefits the most wealthy and the most elite and is divisive. Rutledge countered that she has a record of accomplishments over the past eight years fighting against federal overreach and protecting constitutional rights, and said she is proud to have taken more than 100 legal actions against what she described as President Joe Biden’s federal overreach.

Rutledge raised and spent more money than either Krout or Gilbert, according to their latest campaign finance reports.

Krout reported raising $268,670 in contributions and spending $233,166 through Oct. 29 during the primary and general elections.

Gilbert reported raising $3,229 in contributions and spending $921 through Oct. 29 during the primary and general election campaigns.