Experience credited during victory speech; Gibson hopeful for the future by Stephen Simpson | November 9, 2022 at 4:00 a.m. 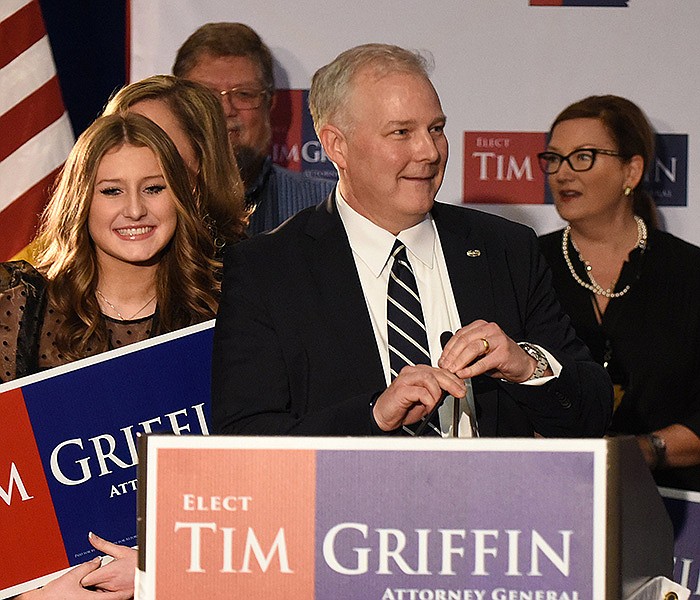 With over three-fourths of the votes counted, Republican Tim Griffin has opened up a big lead over Democratic opponent Jessie Gibson in the race to become Arkansas attorney general.

Unofficial returns in the attorney general's race were:

Griffin, the state's current lieutenant governor, said in a released statement that he was honored and humbled that the voters chose him.

"I am excited to get to work for the people of Arkansas by pushing back against federal overreach, supporting our brave men and women in law enforcement, and working to make our communities safer by fixing our prison overcrowding and parole problems," he said. "I want to thank the Lord for providing this opportunity to serve. Lastly, I want to say a special thank you to everyone who supported me in this race and especially to my wife Elizabeth and our children for their unwavering support and for allowing me to continue serving the people of Arkansas."

Griffin, 53, defeated Leon Jones Jr. in the May 24 Republican primary after originally announcing that he intended to run to succeed Gov. Asa Hutchinson. Griffin dropped out of the governor's race and filed to run for attorney general after Republican Sarah Huckabee Sanders -- the daughter of former Gov. Mike Huckabee and a former press secretary for former President Donald Trump -- announced her candidacy for the state's top elected position.

Gibson said he believes they ran a great campaign and did everything possible to win.

"We were running on a message of positivity, and I couldn't be happier with the campaign," he said. "We left it all on the field."

Gibson said his race not being called as of 9 p.m. on Tuesday shows there is hope for the Democratic Party in Arkansas.

"What you are seeing are people in Arkansas are looking for different options," he said. "More positive options. The Republicans have been using a lot of scare tactics about the Democratic Party, but what people are seeing doesn't line up with that narrative. We are parents, husbands and wives who want to make a difference."

Gibson didn't rule out running again, but it will be a family decision.

"Maybe -- my boys are sitting over there, they are 10 and 14, and so is my wife -- it has been a struggle," he said when asked if he was going to step back into politics. "Not going to rule it out, it has been a wonderful experience. I know the state needs leaders, but we are going to have to reassess after this one is over and figure out where we are. It is really a family decision for me. That is No. 1 right now on my list of things, is to take care of them and be a good dad for a while."

Griffin throughout the campaign stressed his experience, mentioning his time as lieutenant governor, a former congressman representing the 2nd District and a former U.S. attorney is what separates him from Gibson.

"I have been elected for going on 12 years now, and I have served by working hard and by doing what I said I was going to do, by demonstrating integrity and being a good steward of taxpayer dollars," Griffin said.