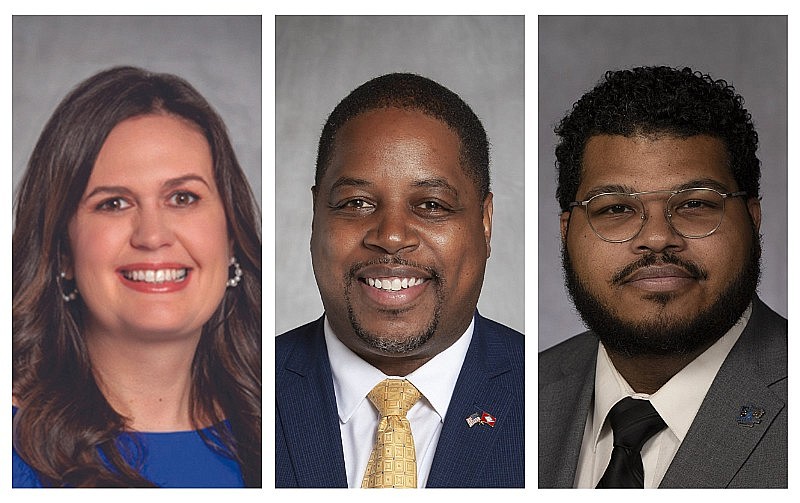 Sanders collected $1.17 million in contributions from Oct. 1-29, while Jones collected $470,316, according to their latest campaign finance reports.

Campaign finance reports for candidates for state offices were due in to the secretary of state’s office on Tuesday.

In her report filed Tuesday night, Sanders of Little Rock reported spending $2.44 million from Oct. 1-29. Expenses included $1.3 million for television advertising and $401,888 for direct mail. Sanders’ campaign began what it has described as a $3.5 million paid media campaign on Sept. 3, with its first statewide general election television ad.

A campaign finance report for Harrington of Pine Bluff for the period from Oct. 1-29 wasn’t posted on the secretary of state’s website as of Wednesday morning.

The reasons behind Sanders’ out-of-state money, political experts and donors say, include her national profile as a former White House press secretary for President Donald Trump. Her face and statements have been broadcast frequently in national news reports. She also profits from Trump’s endorsement and the continued national presence of her father, former Arkansas Gov. Mike Huckabee, who ran for president in 2008.

Asked about out-of-state campaign contributions during the Arkansas PBS debate Oct. 21, Sanders said it’s clear that her message of defending freedom and helping empower every Arkansan “is resonating not just here at home, but frankly across the country.

Sanders said she has traveled to all 75 counties in Arkansas and has seen enthusiasm and excitement for her message.

Asked about out-of-state campaign contributions at the same debate, Jones said it shouldn’t matter where the money comes from.

“What it says is that people are interested in investing in Arkansas,” he said.

“What should matter is what strings are attached to the money, and that’s the question that people have to ask,” Jones said.

Also asked about out-of-state campaign contributions at the debate, Harrington said, “This is a symptom of the machinations of established party power receiving contributions from out of state.

“That’s just a fact,” he said. “You have parties, and parties try to help strong candidates, so they dump money to the candidates that they think will win.”

Harrington said “the strings attached is the real issue.”