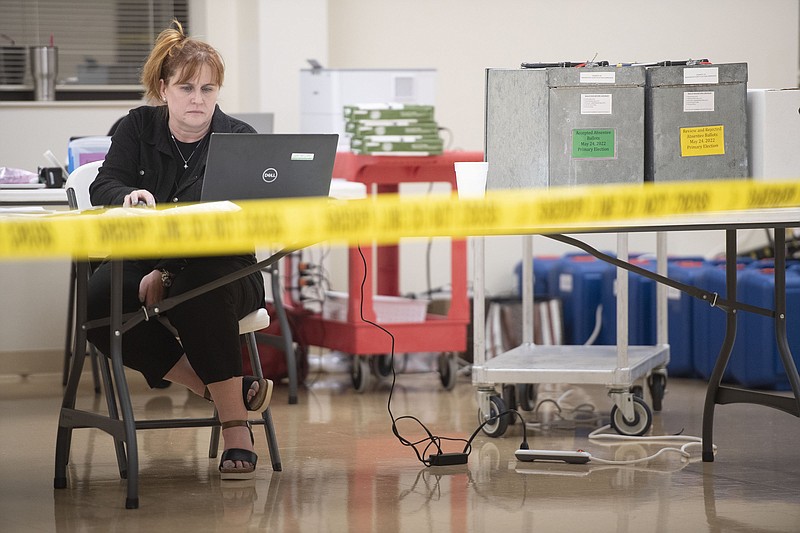 FAYETTEVILLE — A runoff election will be needed to decide the Republican Party’s candidate for Washington County judge.

Mark Scalise and Patrick Deakins will face each other in a June 21 runoff election after no candidate won a majority of the votes in a four-way race for the nomination. Sharon Lloyd and Tom Terminella finished third and fourth in the voting.

The winner of the runoff election will face Democrat Josh Moody in the November general election.

A power outage in the area around the Washington County Courthouse prompted election officials to move the ballot-counting process to the Sheriff’s Office annex building on Clydesdale Drive. The power was lost in an area of central Fayetteville around 3:30 p.m. and included one polling place. Sequoyah United Methodist Church on Old Wire Road was briefly without power. Voting continued there as election workers closed some voting machines and kept others operating on backup battery power, election officials said.

Deakins is a justice of the peace, now serving his second term on the Quorum Court. He said his first concern is to take care of county employees, including keeping pay competitive with the private sector. The Road Department has been constantly losing employees to private companies, he said.

The Quorum Court recently approved a new pay plan for Road Department employees, and Deakins said county government needs to monitor the department and others to ensure they don’t fall behind.

Deakins also said the county has to decide how to handle crowding at the Washington County Detention Center.

The Sheriff’s Office proposed an expansion of the jail in 2018, citing crowding as a continuing problem. The jail has a design capacity of 710 beds but is generally considered to be at capacity when about 80% of the beds are occupied due to a legal requirement for separating different detainee classifications.

A more recent proposal prompted by the covid-19 pandemic would add 232 beds and space for quarantining and isolating detainees for health reasons; for the intake, medical and courts areas; and storage and administrative purposes.

The proposed expansion would cost about $20 million if approved by the Quorum Court and take two to three years to complete. Some justices of the peace have proposed using some of Washington County’s $46 million in American Rescue Plan money to pay for the expansion. Others have questioned whether a jail expansion would meet federal guidelines for the use of the money.

Deakins said he favors the expansion plan and using the federal money.

Scalise, an attorney with a background in engineering, said he’s running because he has a passion for public service and wants to bring his experience in the private sector to government.

One of the most important lessons he said he has learned in private business is he doesn’t have all the answers. Scalise said initially he will spend time observing government operations and learning. He said county government should be constantly reviewing its policies and procedures.

Scalise favors the 2018 plan to expand the jail.

He understands the larger expansion plan wouldn’t be eligible for federal American Rescue Plan money and said an expansion plan with a temporary sales tax as a funding mechanism should be updated and presented to voters.

Moody, a Fayetteville public school teacher who also works in the county’s Juvenile Detention Center, said he wants to change the style of leadership in county government and the direction county government has taken on a number of issues.

Moody said the plan to raise pay for Road Department employees is an example of the issues on which county government should be focused. He said county government needs to be aware of employees’ needs and their working conditions. He promised to have an open-door policy to listen to anyone who wants to speak to him about county government.

Moody said he doesn’t support the recent proposal to expand the county’s jail. He doesn’t think the rescue money should be used for a jail expansion when the county hasn’t fully explored or implemented any alternative solutions.

Complete but unofficial results are:

For the latest results, go to nwaonline.com/nwavote