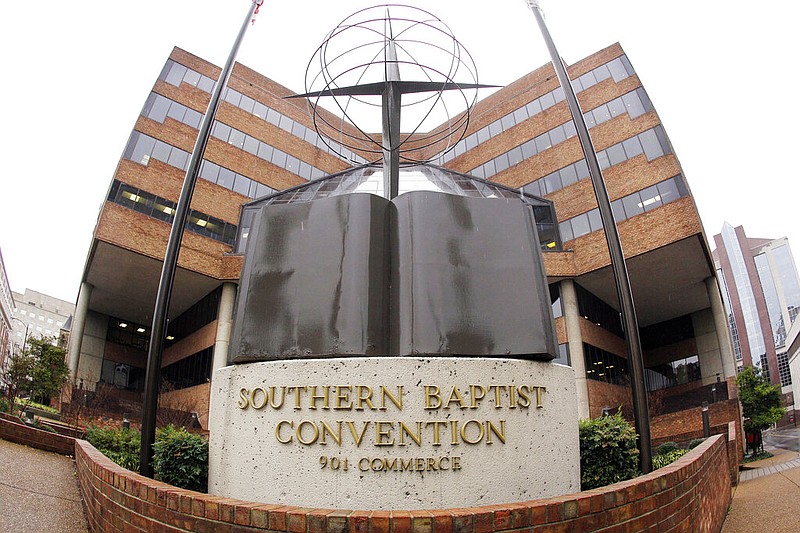 The headquarters of the Southern Baptist Convention in Nashville, Tenn., is shown in this Dec. 7, 2011 file photo. (AP/Mark Humphrey)

The Southern Baptist Convention compiled a list of hundreds of ministers accused of sexual abuse, but its top executive, former Cross Church Northwest Arkansas Pastor Ronnie Floyd, opposed making it public and chose not to examine the list himself, according to an independent report commissioned by the denomination and made public this week.

Floyd, president and chief executive officer of the convention's executive committee, and other key leaders tried to block the type of sweeping investigation sought by delegates -- known as messengers -- to the denomination's June annual meeting in Nashville, the 288-page report said.

Floyd and several other officials resigned in October after the executive committee voted to waive attorney-client privilege, as the messengers had requested, enabling investigators to see documents that would otherwise have been shielded from view.

For years, officials in the denomination's Nashville headquarters worked hard to shield the body from legal liability, but failed to take the steps necessary to protect the people in the pews, the report indicates.

That emphasis, which predated Floyd's appointment to the post in April 2019, remained during his tenure, the report indicated.

For many years "a few senior [executive committee] leaders, along with outside counsel, largely controlled the [executive committee's] response to these reports of abuse ... and were singularly focused on avoiding liability for the SBC," the report said.

"In service of this goal, survivors and others who reported abuse were ignored, disbelieved, or met with the constant refrain that the SBC could take no action due to its polity regarding church autonomy – even if it meant that convicted molesters continued in ministry with no notice or warning to their current church or congregation," the report stated.

Guidepost Solutions, the investigative firm that prepared the report, portrayed Floyd as an impediment to fixing the system.

"Dr. Floyd's resistance to reform as SBC President is disappointing, given that he spoke out against clergy abuse as a pastor, writing in 2014 that: 'Furthermore, we can and must hold up the issue. Yes, we are a convention of autonomous churches, but we need to continue to sound the alarm on national, state and the association level, calling churches to protect children in their care,'" the report quoted him as saying.

In a written statement Monday, Floyd said he had advocated for a review while also being a responsible steward of church resources.

"People reading the report may not realize that I supported the independent investigation. I also hired GuidePost to do it even before the 2021 Convention. Our fiduciary duties also required due diligence to understand the implications of 'waiving attorney-client privilege.' This was never an effort to resist or obstruct the investigation, but responsible governance," he wrote. "I continue to support appropriate reforms and pray God gives wisdom to those meeting in Anaheim."

Southern Baptists will discuss the report and elect a new convention president when they gather June 12-15 for this year's annual meeting in southern California.

At last year's gathering, Floyd had advocated for a "limited review," the report said. Ultimately, the messengers opted to give investigators a "wider purview" and to ensure that the investigation would be overseen by a task force, rather than the executive committee itself, the report stated.

Among other things, the task force recommends that the denomination:

• "Create and maintain a process that will work within our Baptist polity for alerting the community to the presence and activity of credibly accused offenders, including the establishment of a 'ministry check' website."

• Hire a subject matter expert or experts "to receive calls, provide initial guidance for reports of sexual abuse, and work with state conventions for training and educational opportunities."

• Provide "training regarding sexual abuse prevention and survivor care" for all entity boards and standing committees while also implementing "background checks as part of their orientation and selection."

• Ensure that seminary students and International Mission Board and North American Mission Board workers receive "formal preparation ... in regard to prevention, training, and survivor care."

The Southern Baptist Convention is the largest Protestant denomination in the country, with membership of nearly 13.7 million in 2021 and average Sunday in-person attendance of about 3.6 million.

Its 47,614 churches reported receipts last year of more than $11.5 billion, with more than $1 billion going for missions work, according to the latest Annual Church Profile Statistical Survey.

While the church business is conducted at its annual meeting each year, the executive committee oversees matters in the interim.

For 15 years or more, advocates for child sex abuse survivors had urged the convention to compile a list of those in ministry credibly accused of preying on congregants.

Top denominational leadership, and the attorneys who advised them, repeatedly rebuffed those requests. Nonetheless, officials compiled an in-house list of alleged abusers that was kept secret, the report revealed.

Officials in Nashville took no steps to ensure that the people on the lists were removed from the ministry, it said.

In a May 2019 email, Executive Committee Vice President Dr. Roger "Sing" Oldham told Floyd that, for the past decade, he had been "regularly sending [Executive Committee General Counsel] Augie [Boto] news reports of Baptist ministers who are arrested for sexual abuse for his awareness."

Boto replied: "Yes. We are collecting them, and may even post them in some way, but we'd have to really examine the potential liabilities that would stem therefrom."

Ultimately, the executive committee opted not to share the information.

"Despite collecting these reports for more than 10 years, there is no indication that Dr. Oldham, Mr. Boto, or anyone else, took any action to ensure that the accused ministers were no longer in positions of power at SBC churches. The most recent list prepared by the [executive committee] staff member contained the names of 703 abusers, with 409 believed to be [Southern Baptist Convention] affiliated at some point in time."

Wade Burleson, a former president of the Baptist General Convention of Oklahoma, was one of the first to push for creation of a database. His efforts, roughly 15 years ago, were repeatedly rebuffed by executive committee officials.

Monday, he praised the convention for taking steps to address the problem and for removing the leadership that was in place early in the struggle.

"The SBC is full of good men, good women, good pastors, good leaders," he said. "I was attempting to remove the few rotten apples and nobody wanted to talk about it. Nobody wanted to admit there was a problem. That's over now," he said.

"Correction has come. Accountability is here. And that's a good thing. We're doing everything that we should have been doing 15 years ago," he said.

Christa Brown, an attorney who was abused by a Southern Baptist Convention pastor as a child and later fought for greater convention accountability, welcomed the Guidepost findings Monday.

"It's a very fine report but we still have to wait for implementation of recommendations and structures and processes to address the problem," she said.

Floyd can't take credit for the progress, she said.

"He fought tooth and nail to prevent this report, to blockade this report," she said. "He did nothing that I ever saw to promote any kind of transparency in connection with this."

In an email, Floyd said, "The thought of any sexual abuse done to anyone abhors me."

"One of the most grievous things for me personally has been the attacks on myself and the trustees as if we are people who only care about 'the system.' Nothing could be further from the truth," he wrote.

The Arkansas Baptist State Convention has 1,488 churches and total membership of 412,404, a church spokesman said Monday.

In October, messengers to the state convention's annual meeting unanimously called on their incoming president to create a task force to determine best practices "to ensure the policies and procedures" of the convention "are above reproach in handling sexual abuse allegations."

A convention spokesman said there would be a statement but none had been received by 10:45 p.m.

A copy of the report is available at: https://www.sataskforce.net/updates/guidepost-solutions-report-of-the-independent-investigation.