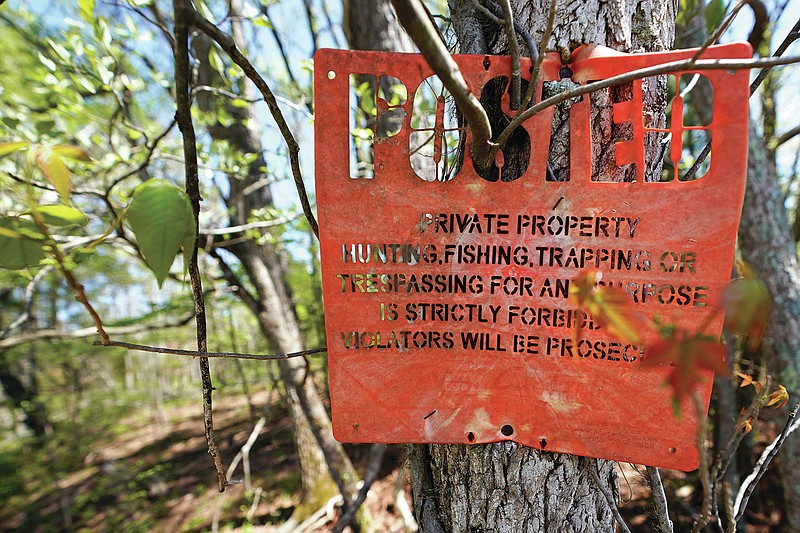 A No Trespassing sign on the property of farmer Jim Medeiros at his farm Wednesday, April 20, 2022, in Wilsons, Va. Medeiros owns a 143-acre dairy and poultry farm and has had issues with hunting dogs on his property killing chickens. (AP Photo/Steve Helber)

WILSONS, Va. -- Soon after Jim Medeiros bought his 143-acre cattle and poultry farm in rural Virginia a decade ago, he and his wife were startled by the sounds of 20 hunting dogs barking and howling as they circled their house and chased their chickens.

When Medeiros confronted a hunter nearby, the man told him he had permission to hunt on Medeiros' property. In disbelief, Medeiros called the agency that enforces a state law allowing hunters to retrieve their hunting dogs from private property, even when the property owners object.

"He told me, you can't prohibit people from coming onto your land," recalled Medeiros.

He then pointed out that his land was posted with no trespassing signs.

"I said, 'You don't understand. My land is posted,'" Medeiros said.

"You don't understand," the official responded. "You can't stop them."

After years of putting up with baying dogs and dead chickens, Medeiros and several other property owners are suing the state over its "right to retrieve" law, arguing that allowing hunters to go on their property without permission amounts to an uncompensated taking of their land and violates the state and federal constitutions.

A number of states allow hunters to retrieve their dogs without permission from property owners under certain circumstances, such as properties that do not have "no trespassing" signs. But Virginia's law says hunters are allowed to retrieve dogs even when the property owner has specifically denied access.

A 2016 report prepared by the Virginia Department of Game and Inland Fisheries, now the Department of Wildlife Resources, said only one other state, Minnesota, had a similar law. Minnesota's law says a person can enter private land to retrieve a hunting dog without permission of the owner, but cannot have a firearm when doing so and must immediately leave after recovering the dog.

Virginia's law prohibits hunters from carrying guns or bows and arrows while retrieving their dogs from private property. It also says hunters must identify themselves when asked by the landowner. If they refuse, they can be charged with a misdemeanor.

The Virginia property owners are suing the Department of Wildlife Resources, which enforces the law. They are represented by the Pacific Legal Foundation, a conservative legal organization that won a major property rights case at the U.S. Supreme Court last year. The high court found that a California regulation requiring agricultural businesses to allow union organizers onto their property for up to three hours a day, 120 days per year, amounts to the government appropriating "a right of access to private property" and "constitutes a per se physical taking" under the court's precedents.

Daniel Woislaw, a lawyer with the Pacific Legal Foundation, said he believes Virginia's "right to retrieve" law amounts to a similar physical taking of private property.

"When Jim has to let deer dogs and deer dog hunters enter his property, and he's not allowed to tell them to stay away, and when they're killing his livestock and disrupting his operations, that's a taking of a valuable property interest," Woislaw said.

The law itself was first put on the books in 1938, but the tradition of hunting with dogs dates back 400 years to colonial times, said Kirby Burch, a bear hunter who owns eight hunting dogs and is the chief executive officer of the Virginia Hunting Dog Alliance, a political action committee that represents about 90,000 hunters in the state. Burch said most hunters try to be considerate of land owners and quickly retrieve their dogs when they cross onto private property.

"A lot a people who move here from other states are offended by the notion of hunting with dogs so when a dog runs across their property, they're offended, and I understand that, but I think the vast majority of hunters with dogs try in every way possible to avoid irritating their neighbors," said Burch, 75, who added he has been hunting with dogs since he was 5.

Burch's group estimates that more than half of the 254,000 licensed hunters in Virginia hunt with dogs.

The lawsuit asks the court for a judgment declaring that the law takes the plaintiffs' private property without compensation for public use, a violation of the state constitution and the Fifth Amendment to the U.S. Constitution.

Multiple attempts have been made in the legislature to overturn the law, but none have succeeded.

Ryan Brown, executive director of the Department of Wildlife Resources, declined to comment on the lawsuit. Brown said hunters and private landowners have been able to peacefully co-exist for the most part, but as more rural land has been developed and Virginia has become more suburbanized, the two groups have been at loggerheads over the hunting dog issue.

"Both sides have been very passionate about their views." 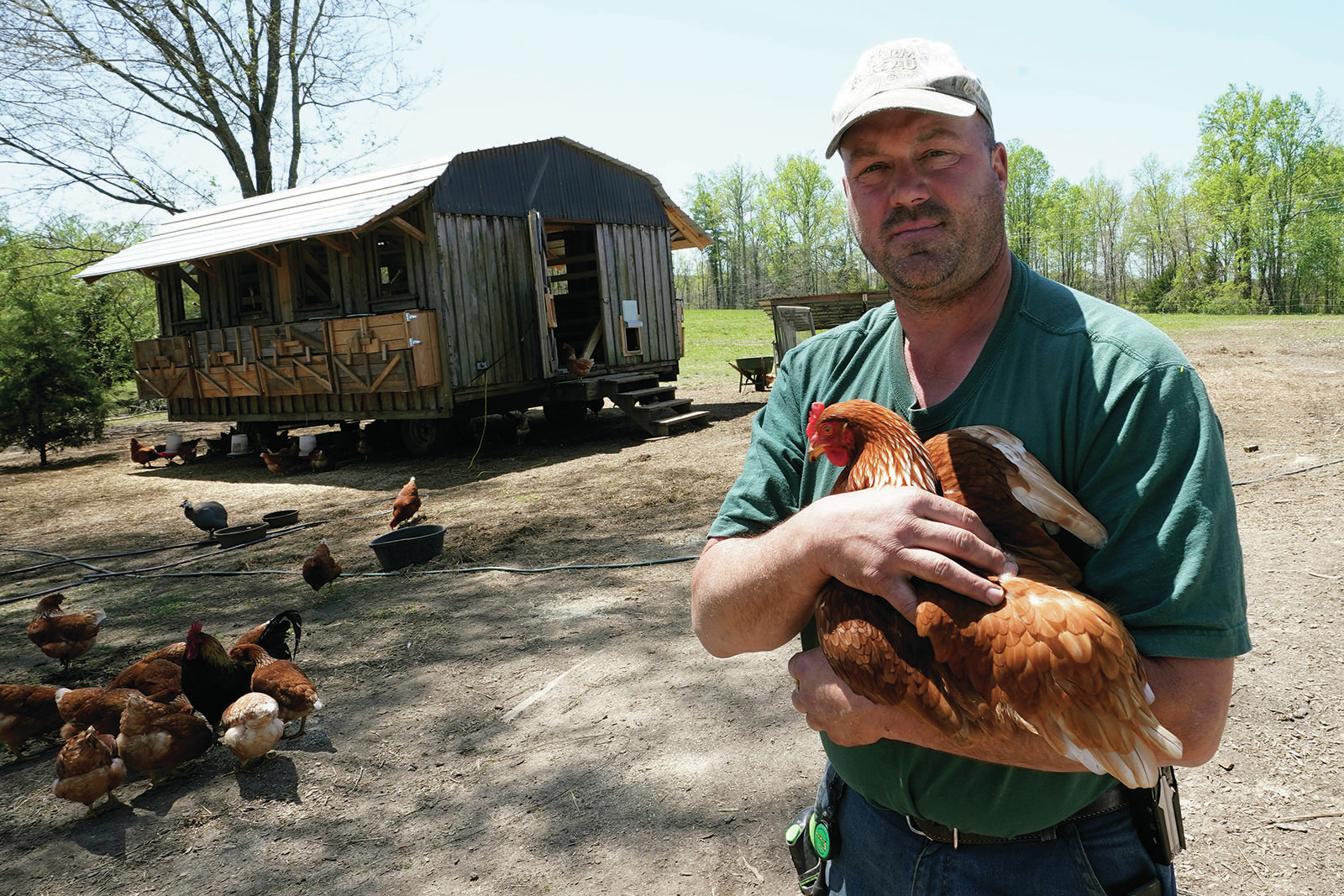 Farmer Jim Medeiros holds one of his chickens during an interview at his farm Wednesday, April 20, 2022, in Wilsons, Va. Medeiros owns a 143-acre dairy and poultry farm and has had issues with hunting dogs on his property killing chickens. (AP Photo/Steve Helber) 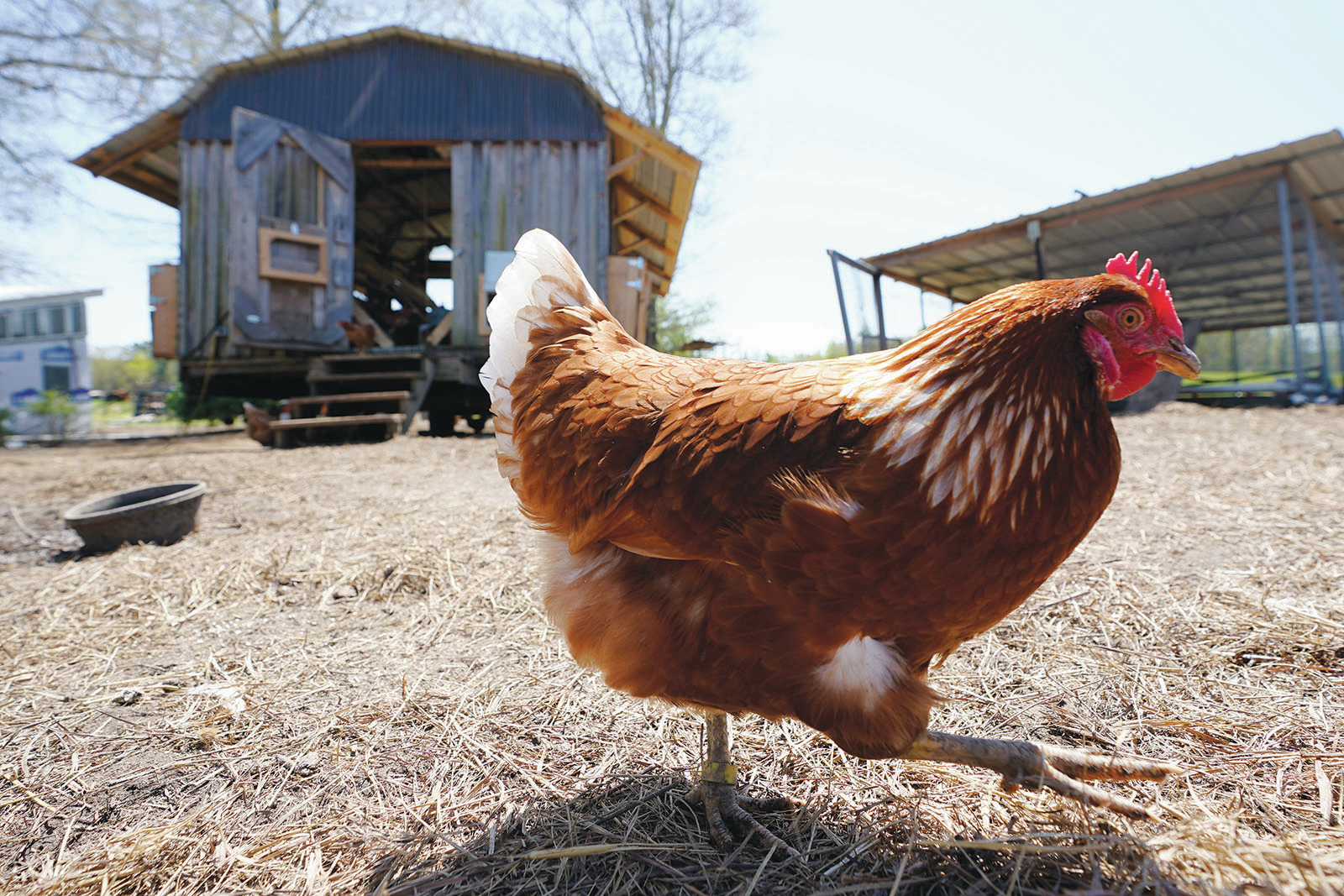 A chicken walks past the mobile chicken coop on the farm of Jim Medeiros at his farm Wednesday, April 20, 2022, in Wilsons, Va. Medeiros owns a 143-acre dairy and poultry farm and has had issues with hunting dogs on his property killing chickens. (AP Photo/Steve Helber) 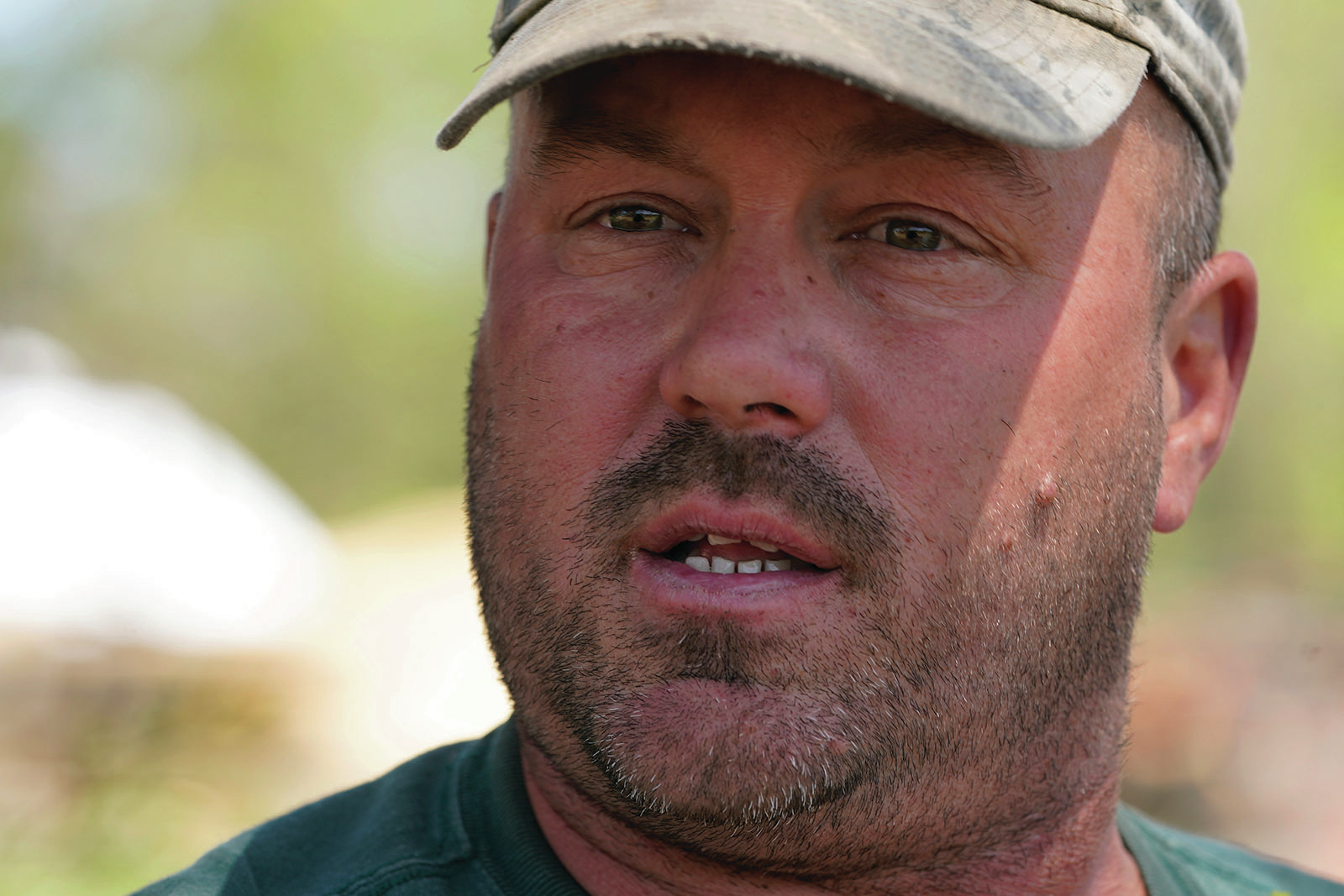 Farmer Jim Medeiros speaks during an interview at his farm Wednesday, April 20, 2022, in Wilsons, Va. Medeiros owns a 143-acre dairy and poultry farm and has had issues with hunting dogs on his property killing chickens. (AP Photo/Steve Helber) 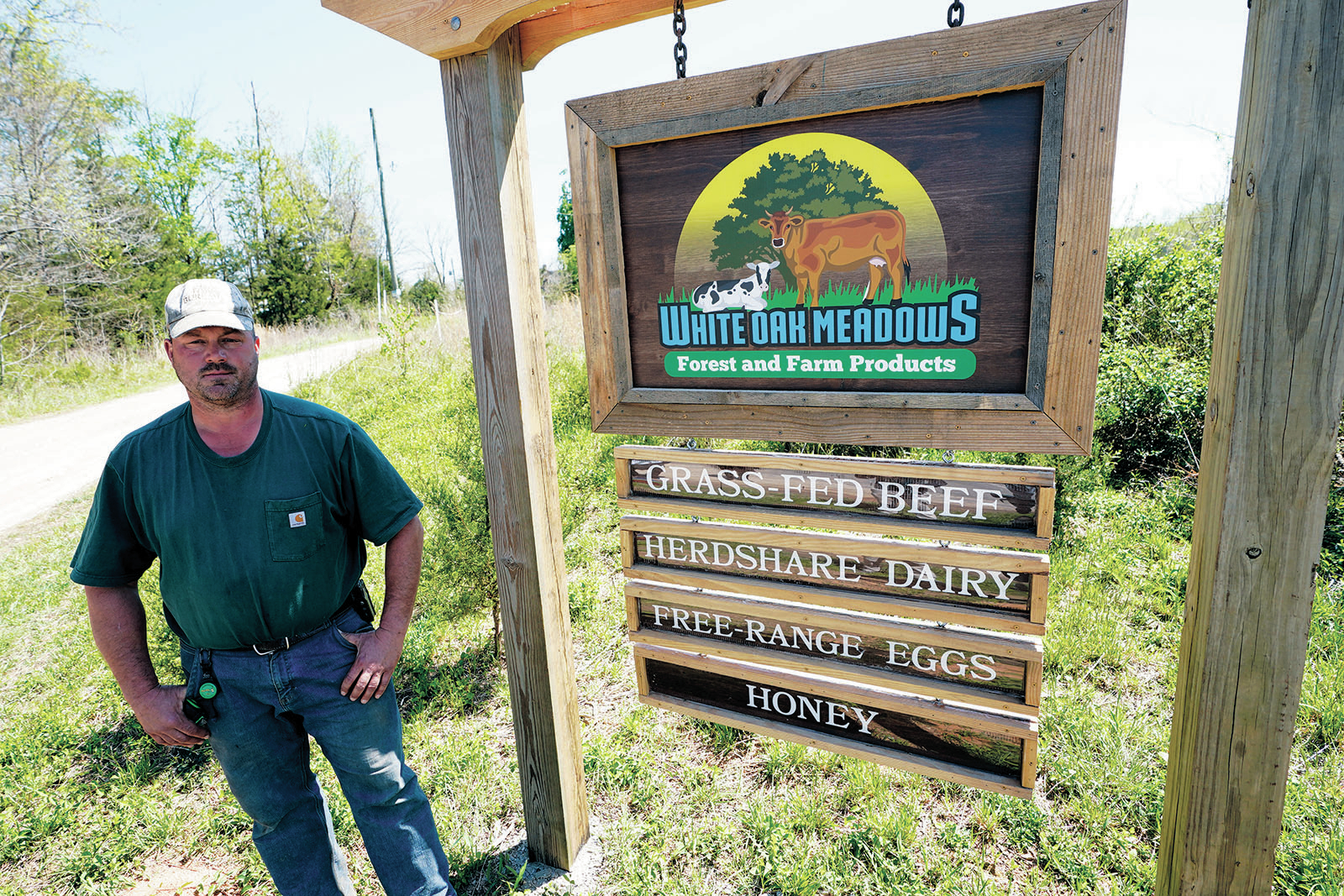 Farmer Jim Medeiros poses next to the sign for his farm during an interview at his farm Wednesday, April 20, 2022, in Wilsons, Va. Medeiros owns a 143-acre dairy and poultry farm and has had issues with hunting dogs on his property killing chickens. (AP Photo/Steve Helber) 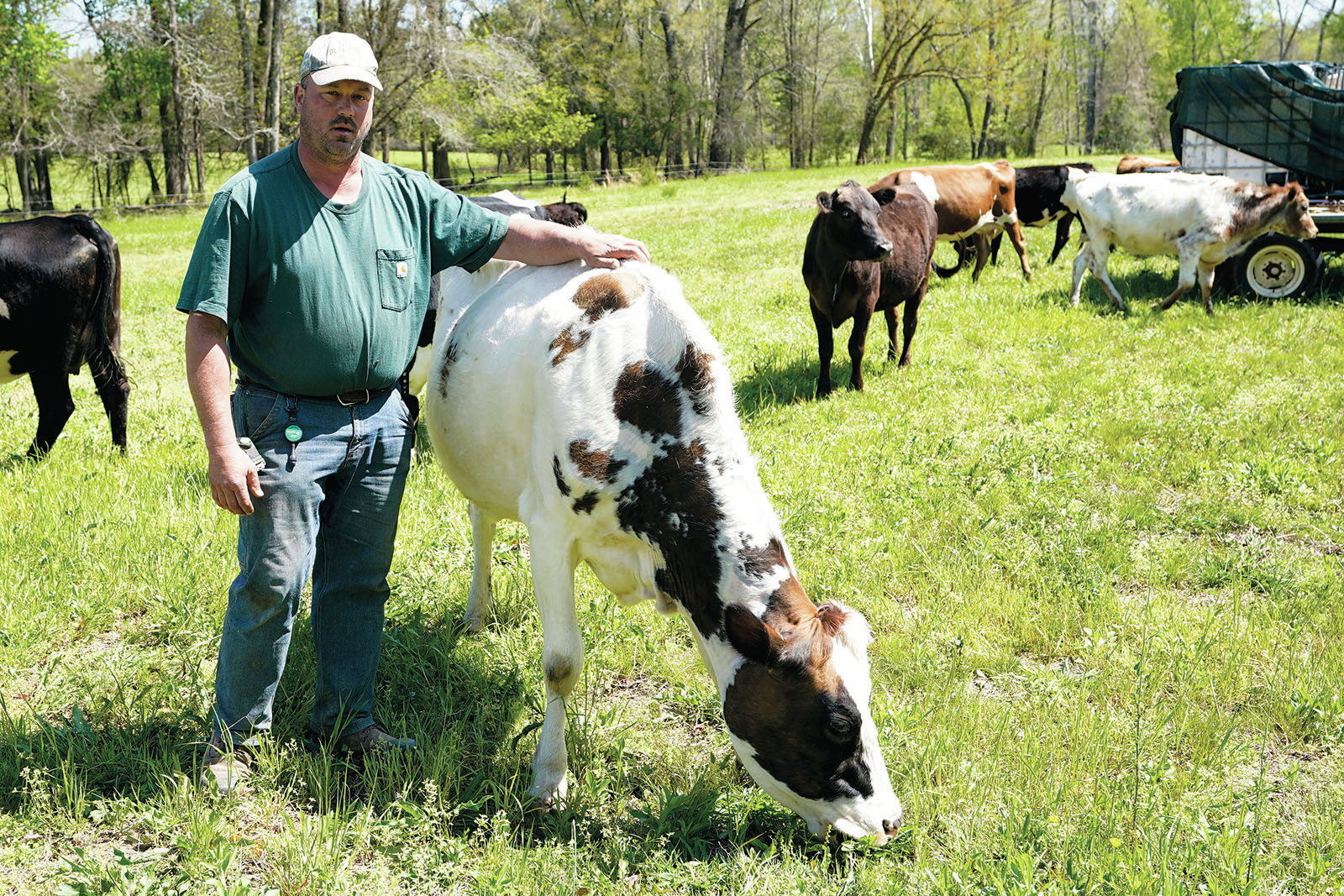 Farmer Jim Medeiros poses with one of his cows during an interview at his farm Wednesday, April 20, 2022, in Wilsons, Va. Medeiros owns a 143-acre dairy and poultry farm and has had issues with hunting dogs on his property killing chickens. (AP Photo/Steve Helber) 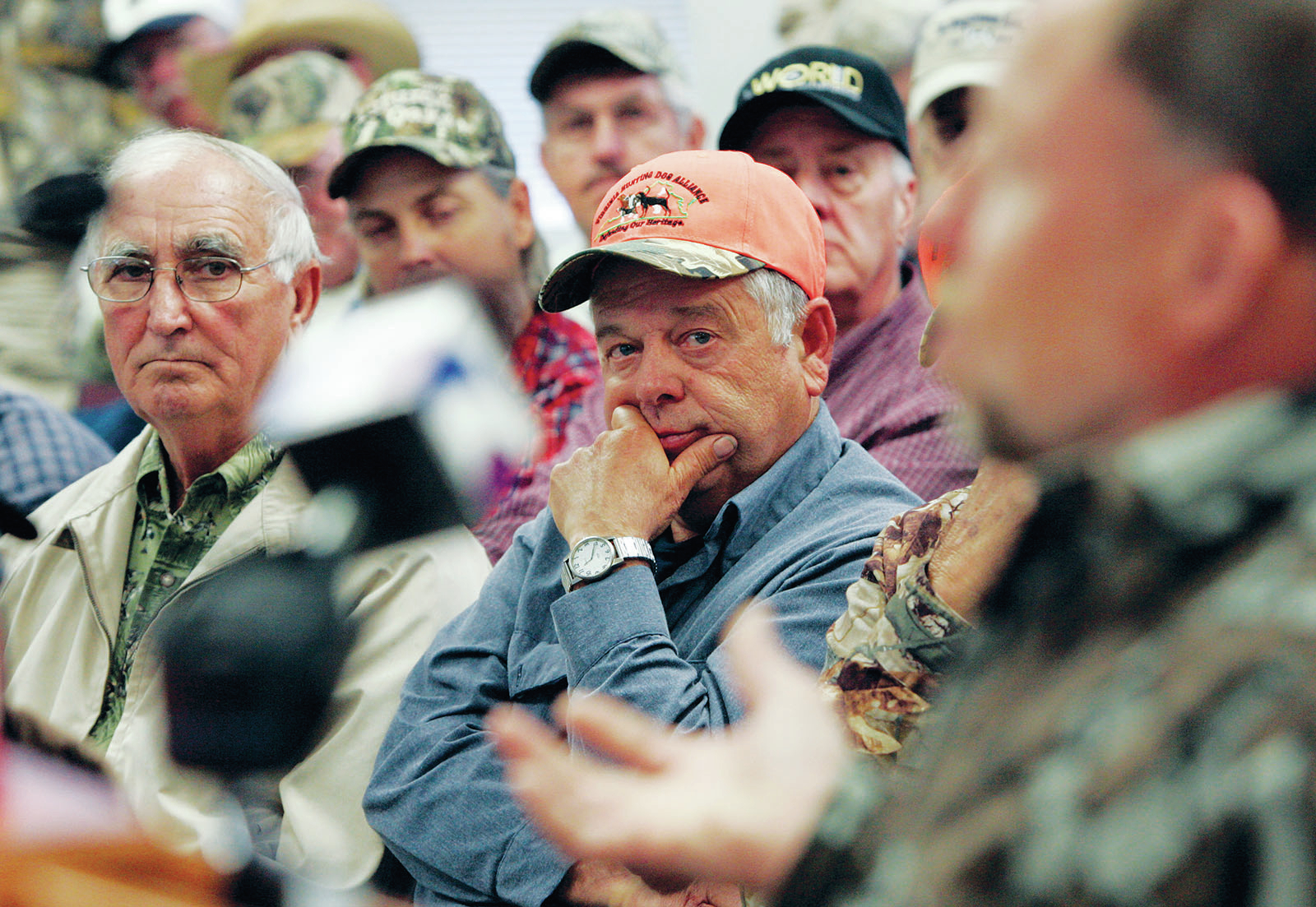 Dog owner and retired veteran David Birdsall, center, listens to testimony during a public hearing on hunting with hounds at the Virginia Department of Game and Inland Fisheries in Richmond, Va., Thursday, Oct. 23, 2008. Virginia's "right-to-retrieve" law allowing hunters to pursue their dogs on privately posted lands is being staunchly defended by dozens of sportsmen. (AP Photo/Steve Helber) 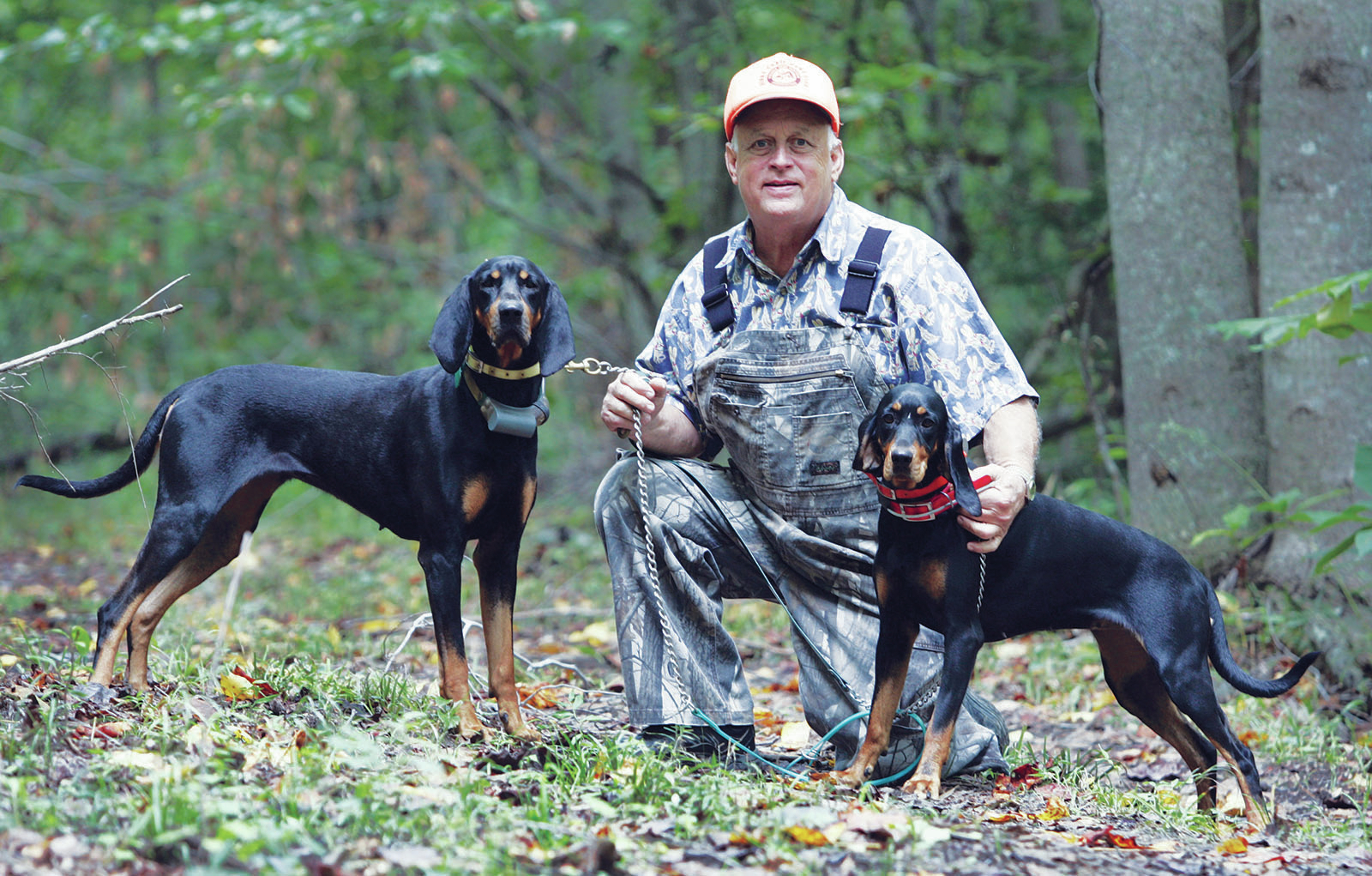 ** ADVANCE FOR SUNDAY SEPT. 28 ** Retired veterinarian David Birdsall poses with two of his Black and Tan hunting dogs, Lady, left, and Jewel, right, on his property at his home in Gloucester, Va., Friday, Sept. 12, 2008. Hunting with hounds in Virginia dates nearly to the founding of Jamestown, America's first permanent English settlement. A Humane Society, report concluded, "the practice of hunting animals with hounds is unsuitable in modern-day Virginia." (AP Photo/Steve Helber)

Print Headline: This land is whose land?