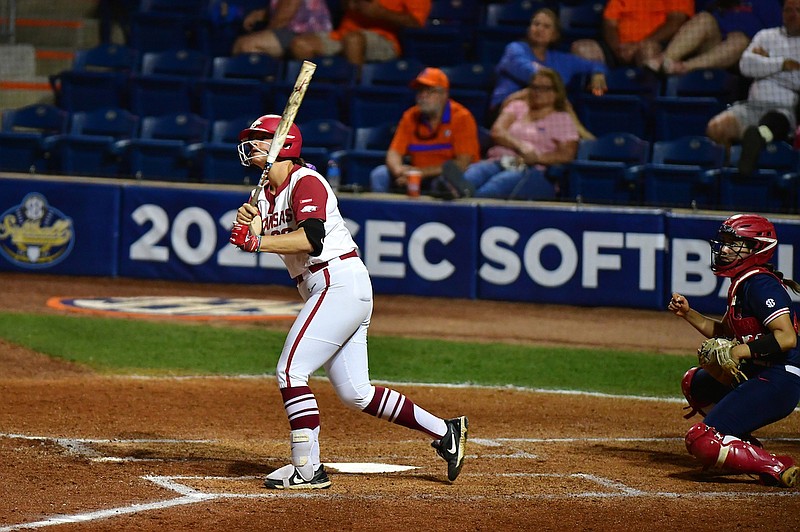 The No. 4 ranked University of Arkansas softball team only got three hits in its SEC Tournament opener Thursday night against Ole Miss, but for a team with record-setting home run power and stellar defense, it was more than enough to get the job done.

Two of the Razorbacks' three hits were home runs, and Arkansas took down Ole Miss 3-0 behind senior pitcher Mary Haff's shutout. The victory set up a semifinal matchup against tournament host Florida, which defeated Kentucky 9-3 to advance to the semifinals.

"I knew with this offense behind me that you go out there and pitch loose with the best offense in the SEC," Haff said during a postgame SEC Network interview. "They're fighters, and we knew it was going to be a dog fight. We just ended up on top which was great for our team."

The Razorbacks were able to manufacture a run in the first inning without a hit, capitalizing on a throwing error by the Rebels.

After KB Sides reached on a walk and advanced to second on a ground out, Taylor Ellsworth sent a slow-rolling grounder toward third base that appeared to be a routine fielder's choice out. An errant throw by Paige Smith back to second base allowed the speedy Sides to sprint home, putting the Hogs ahead 1-0.

In the next inning, Linnie Malkin set the school's career home record in style. She crushed her 48th career homer, a solo shot, deep into the night sky over the left-field wall. The home run surpassed the previous program record of 47 set by Devon Wallace from 2012-15.

Haff ran into trouble in the fifth inning but was able to keep Ole Miss from scoring. With the bases loaded and two outs, the redshirt senior from Winter Haven, Fla., got Smith to strike out swinging, putting an end to the threat.

"I just wanted to throw strikes," she said of her mindset in getting out of the jam. "I got behind in a lot of counts this game, more than I would want to, but I had my defense behind me, so I knew as long as I threw strikes they'd have my back."

Haff allowed five hits and struck out nine Rebels en route to the victory. In the first inning, she secured her 800th career strikeout, becoming the second Razorbacks pitcher to eclipse that mark.

In the bottom of the fifth inning, freshman Kacie Hoffmann hit her sixth home run of the season to pad the Arkansas lead. The sinking change-up was near Hoffmann's feet, but she was able to locate it and launch the solo shot into right field, giving the Razorbacks a 3-0 advantage.

Neither team scored again, and Haff closed the door to send Arkansas into the tournament's semifinals.

For Arkansas to make its first SEC Tournament championship appearance since 1999, it will need to defeat Florida on its home field for the fourth time in 22 days. The Razorbacks traveled to Katie Seashole Pressly Softball Stadium for a series sweep April 22-24 over the Gators.

First pitch is scheduled for 4:30 p.m. Central and will air on ESPN2.

All games on ESPN2