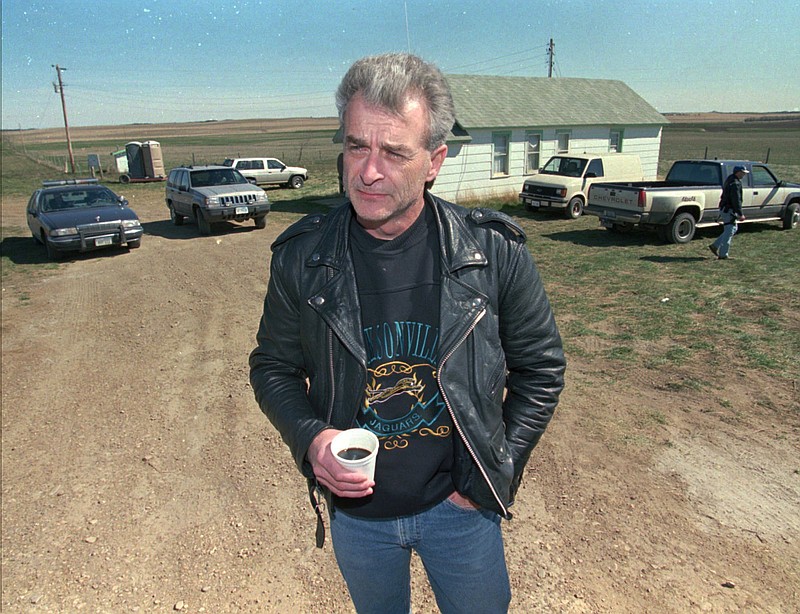 Randy Weaver, the object of the Ruby Ridge siege, visits with the media at the main FBI roadblock outside the Freemen compound in Montana on April 27, 1996. Weaver, patriarch of a family that were involved in an 11-day Idaho standoff in 1992 with federal agents that left three people dead and served as a spark for the growth of anti-government extremists, has died at the age of 74. His death was announced Thursday, May 12, 2022, in a Facebook post by daughter Sara Weaver, who lives near Kalispell, Montana. (AP Photo/Jim Mone, File)

SPOKANE, Wash. -- Randy Weaver, patriarch of a family that was involved in an 11-day Idaho standoff with federal agents 30 years ago that left three people dead and helped spark the growth of anti-government extremists, has died at the age of 74.

His death was announced Thursday in a Facebook post by daughter Sara Weaver, who lives near Kalispell, Mont.

The standoff in the mountains near Ruby Ridge in the Idaho panhandle transfixed the nation in August of 1992.

Randy Weaver moved his family to northern Idaho in the 1980s to escape what he saw as a corrupt world. Over time, federal agents began investigating the Army veteran for possible ties to white supremacist and anti-government groups. Weaver was eventually suspected of selling a government informant two illegal sawed-off shotguns.

To avoid arrest, Weaver holed up on his land near Naples, Idaho.

On Aug. 21, 1992, a team of U.S. marshals scouting the forest to find suitable places to ambush and arrest Weaver came across his friend, Kevin Harris, and Weaver's 14-year-old son Samuel in the woods. A gunfight broke out. Samuel Weaver and Deputy U.S. Marshal William Degan were killed.

The next day, an FBI sniper shot Randy Weaver. As Weaver, Harris and Sara ran back toward the house, the sniper fired a second bullet, which passed through Vicki Weaver's head as she held an infant and wounded Harris in the chest.

The surviving members of the Weaver family filed a wrongful-death lawsuit. The federal government awarded Randy Weaver a $100,000 settlement and his three daughters $1 million each in 1995.

After Ruby Ridge, federal agents laid siege to the Branch Davidian compound in Waco, Texas. It ended violently after 51 days on April 19, 1993, when a fire destroyed the compound after an assault was launched, killing 76 people.

Timothy McVeigh cited both Ruby Ridge and Waco as motivators when he bombed the federal building in Oklahoma City in 1995. Ruby Ridge has been cited often by militia and patriot groups since.

Sara Weaver said she is devastated each time someone commits a violent act in the name of Ruby Ridge. "It killed me inside," she told The Associated Press in 2012, regarding the Oklahoma City bombing. "I knew what it was like to lose a family member in violence. I wouldn't wish that on anyone." 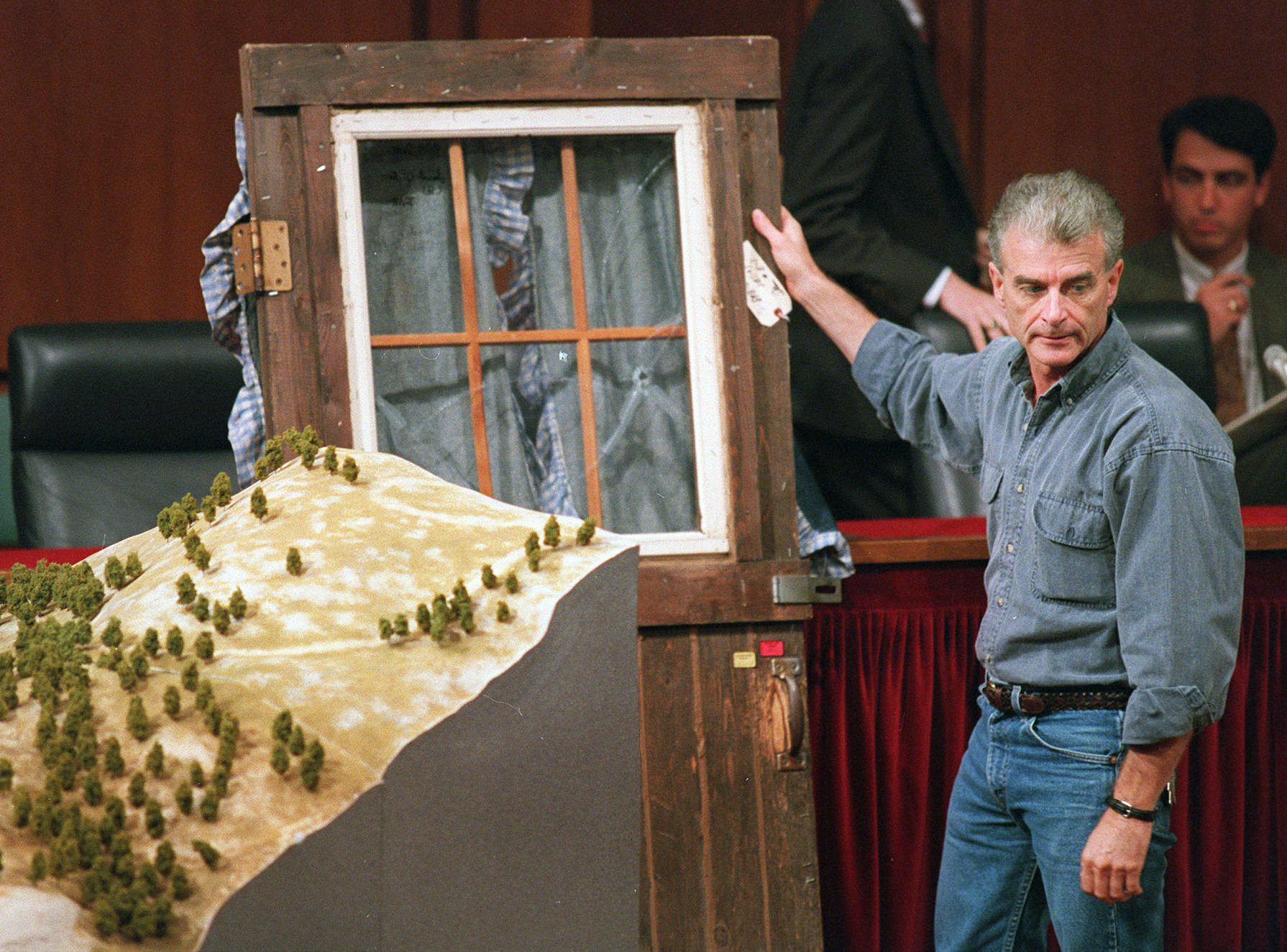 FILE - Randy Weaver holds the door of his cabin showing holes from bullets fired during the 1992 siege of his Ruby Ridge, Idaho, home, model at left, during testimony before the Senate Judiciary Subcommittee on Capitol Hill in Washington on Sept. 6, 1995. Weaver had died at the age of 74. The Ruby Ridge standoff left three people dead and served as a spark for the growth of anti-government extremists. (AP Photo/Joe Marquette, File) 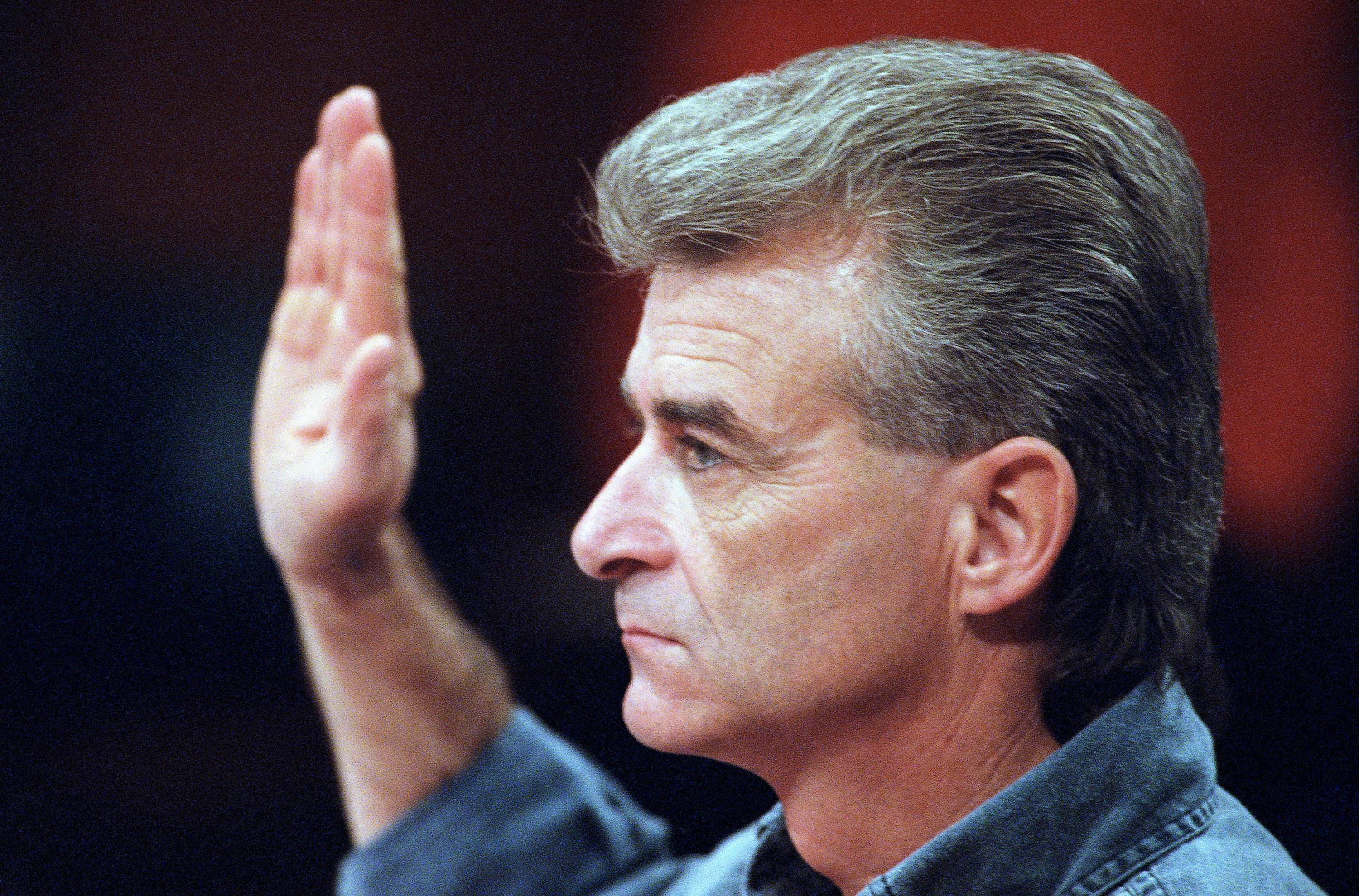 FILE - White separatist Randy Weaver is sworn in on Capitol Hill in Washington, Sept. 6, 1995 prior to testifying before the Senate Judiciary subcommittee. Weaver appealed to the subcommittee for “accountability for the killings of my wife and son” during a 1992 standoff with federal agents at his isolated cabin in Ruby Ridge, Idaho. Weaver, 74, died on May 11, 2022, according to social media posts by his daughter, Sara Waver. (AP Photo/Joe Marquette, File)