Industry is spending millions to gain friends in Congress by BRIAN SLODYSKO AND FATIMA HUSSEIN THE ASSOCIATED PRESS | May 13, 2022 at 4:04 a.m. 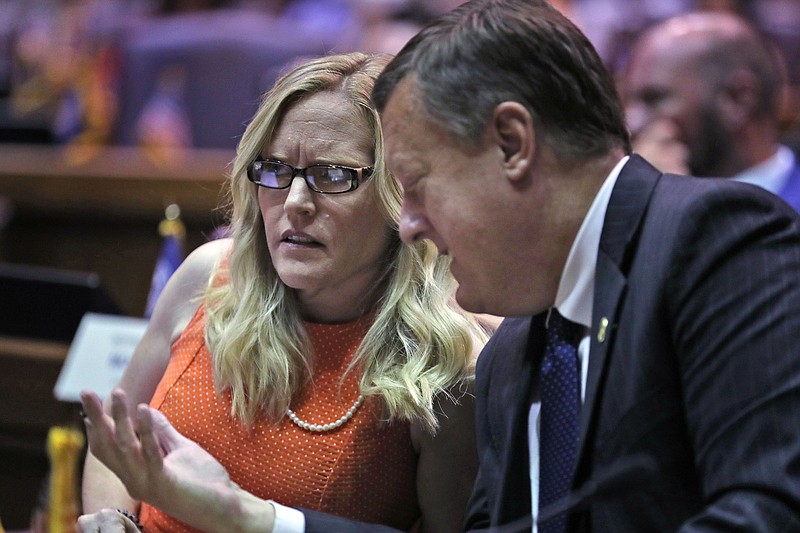 Indiana state Sen. Erin Houchin, R-Salem (left) speaks with Sen. Eric Koch, R-Bedford, during a legislative hearing at the Indiana Statehouse in Indianapolis on Aug. 21, 2021. Houchin benefitted from a Super PAC financed by a cryptocurrency CEO, getting several ads that helped boost her campaign leading up to the state’s Republican primary. (AP/The Indianapolis Star/Kelly Wilkinson)

WASHINGTON -- Cryptocurrency tycoons are emerging as political power players as candidates around the country, like Erin Houchin in southern Indiana, watch the sudden twists taken by ad campaigns outside their control.

Houchin braced for the worst when a mysterious group started buying television spots last month in her highly competitive congressional race. She assumed she would face a negative blitz, like the one that crushed her in 2016 when she ran for the same seat. But, in fact, the opposite happened.

American Dream Federal Action, a super political action committee financed by a cryptocurrency CEO, saturated the district with ads promoting Houchin as a "Trump Tough" conservative who would "stop the socialists in Washington." That push helped secure her victory last week in a Republican primary.

"All you can do is hold your breath," Houchin's longtime consultant, Cam Savage, said of when they learned about the ad buy. "It could help you, but the fear is it will end you."

Cryptocurrency concerns are pouring millions of dollars into primary elections as they try to gain influence over members of Congress and other government officials who are crafting regulations.

This year, for the first time, industry executives have spent nearly $20 million so far, according to records and interviews.

More than $100 million also has been spent on lobbying since 2018 by crypto companies as well as those who potentially stand to lose if the industry goes mainstream, records show.

The push comes as the Biden administration and Congress consider new regulations and set funding levels for agencies that will oversee crypto.

"What do they want? They want no regulation, or they want to help write the regulation. What else is new?" asked Sen. Sherrod Brown, D-Ohio, an industry critic.

Cryptocurrencies are a digital asset that can be traded over the internet without relying on the global banking system. They've been promoted as a way for that those with limited means to build wealth by investing in the next big thing.

But they're also highly speculative and often lack transparency, which substantially increases risk. On Thursday, cryptocurrencies, including Bitcoin and Ethereum, plunged in value. Still, despite the uncertainty, there are signs that crypto is going mainstream. Fidelity Investments, one of the nation's largest providers of retirement accounts, announced earlier this month it will start allowing investors to put Bitcoin in their 401(k) accounts.

And there are indications that the government is increasing scrutiny.

The Securities and Exchange Commission unveiled a plan last week that would nearly double the size of its staff focused on cryptocurrency oversight. Days later, the Justice Department indicted the CEO of a cryptocurrency platform and mining operation, alleging he orchestrated a "$62 million global investment fraud scheme."

Meanwhile, members of Congress and the administration have raised concerns that Russian oligarchs could turn to cryptocurrency to evade U.S. sanctions put in place when Russia invaded Ukraine.

But at least one lawmaker has been an active participant in promoting the allure of crypto riches.

Rep. Madison Cawthorn, a conservative Republican from North Carolina, touted a new crypto coin in a video posted to social media, emphatically declaring, "This is going to the moon, baby," while urging viewers to visit the coin's website and "get on the train." But after an initial spike, it plunged in value and is now worth a small fraction of a penny.

Many cryptocurrency proponents vehemently opposed regulation. But lobbyists say that's now a settled debate and their aim is to persuade skeptics not to have too heavy a regulatory hand.

Some lobbyists are hoping that a wave of campaign spending could help, much of it directed to Democratic primary races.

"Folks in crypto are, all of a sudden, happy to go to political fundraisers," said Kristin Smith, the executive director of the Blockchain Association. Smith's group has spent about $4 million on lobbying since 2018. She added, "The government could actually come in and really mess it up if we aren't constructively engaging."

That's fostered a sense of resentment among some Democrats. In suburban Atlanta, Democratic Reps. Carolyn Bourdeaux and Lucy McBath are squaring off after their districts were merged during redistricting. A crypto-affiliated super PAC is backing McBath, paying for $2 million in TV advertising that praises her.

"They are not doing this out of the goodness of their heart. They are doing this because they want something," Bourdeaux said.