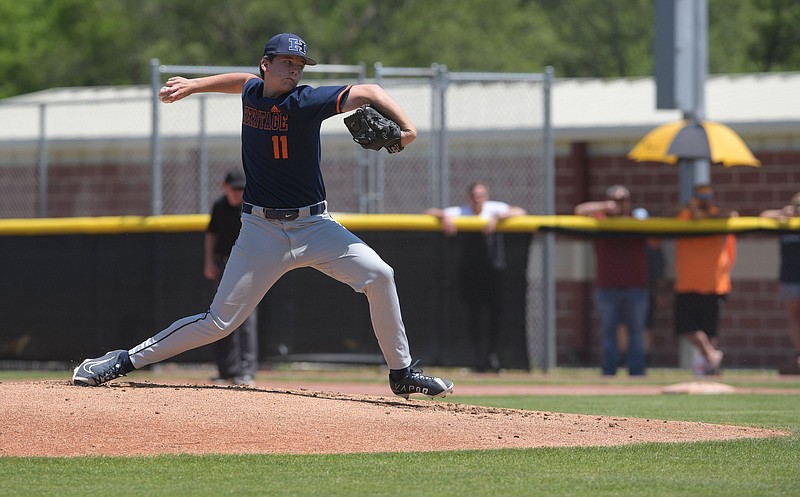 SPRINGDALE -- Coleman MacRae stepped onto the mound with a two-run cushion Thursday afternoon, even though Rogers Heritage failed to get a hit in its time at bat.

It was all the advantage the senior right-hander needed. MacRae held Bryant to three hits, and the War Eagles advanced to the Class 6A baseball state tournament quarterfinals with a 6-0 victory over the Hornets at Bulldog Field.

MacRae, a University of Central Arkansas signee, needed only 89 pitches to get a complete-game outing and struck out nine as Rogers Heritage (19-11) earned its first state tournament victory since beating Bryant 6-3 in 2015.

"It's a lot better when you're pitching ahead," MacRae said. "You can pitch more comfortably and throw more strikes. It's all a credit to my team. We had a good first inning and never let up."

The War Eagles took advantage of early wildness shown by Bryant starter Logan White, who hit two batters and issued a walk to load the bases. Jack Hamm followed with a walk, which scored Bennett Crafton. Then Michael Johannsen scored on a wild pitch to make it 2-0.

That proved to be beneficial for Heritage, which didn't record its first hit and didn't score again until the seventh inning.

"You worry in games like these that your hitters are going to be over-anxious, and they were after the first," War Eagles Coach Brian Walker said. "Bennett gets hit, and he's our table-setter. We were then able to put some pressure on them.

"Young people do crazy things at the beginning of these games, but we were able to weather the storm. And Coleman pitched a heck of a game and gave us a chance."

The War Eagles' first hit couldn't have come at a more opportune time. Bryant had the infield drawn in when Ethan Martin poked a single into right and drove in Tyler Jouett, who walked and stole second before moving to third on a groundout.

Jamm then drew his second bases-loaded walk and made it a 4-0 game before Brett Renfrow singled in Heritage's final two runs.

Ty Jones and Zeb Allen each hit a home run and drove in two runs as Southside defeated Northside.

The Mavericks (19-11) jumped out to an early 2-0 lead when Allen doubled and scored on a single by Kent Carlisle, who later came home on Jones' sacrifice fly. Luke Wyatt later scored on a passed ball before Jones hit his solo shot in the fifth and Allen belted a two-run blast to right in the sixth.

Josiah Darnell accounted for both runs for Northside (11-19) as he walked and later scored when David Giacinti reached on an error, then he hit a solo home run in the sixth.

Jones also pitched five-plus innings, but left the game right after Darnell's home run. Bailey Mattingly pitched two innings and picked up the save for Southside, which plays Conway at 2:30 p.m. today at Bulldog Field.

A passed ball allowed Austin Ryals to score in the eighth inning and give Cabot the win over West at Springdale Har-Ber's Wildcat Field.

Ryals hit a two-out single after the Panthers had bunted into double play against Cole Kitchens, the Wolverines' third pitcher of the game. He moved to second when Hayden Prewitt walked, then two passed balls eventually led to the only run of the game.

West tried to score a run in the seventh on an error, but Alex Downing was thrown out at the plate to end the inning.

Tony Woodie's double and back-to-back walks set the stage for Christensen, whose shot to left made it 3-0. Luke Crumpler added an RBI single and Stephon Gryskiewicz had a sacrifice fly, while Bentonville (21-10) added runs off a North Little Rock error and a passed ball.

Zac Sohosky and Woodie made that stand as they held the Charging Wildcats (15-14) to five hits. North Little Rock did all of its scoring in the fifth as Jaylon Johnson belted a two-run double against Sohosky, who threw six innings and struck out eight in a 101-pitch performance.