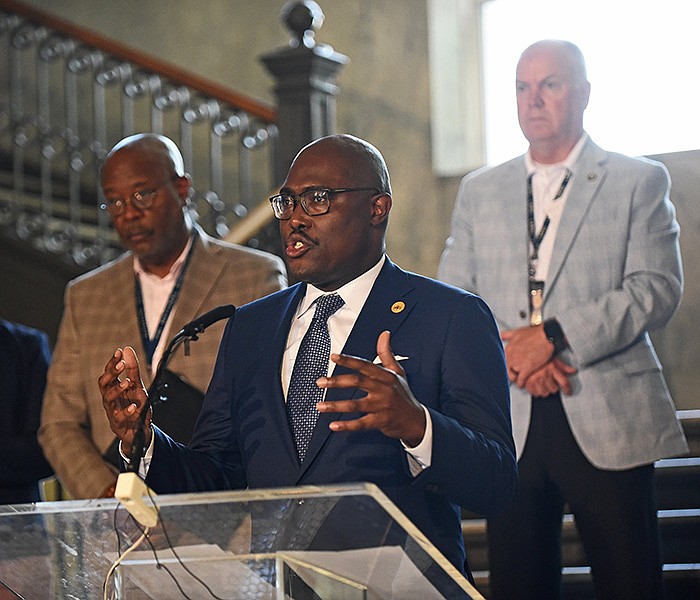 Little Rock Mayor Frank Scott Jr. plans to appoint a new permanent chief of police before Election Day in November, he said during a news conference Wednesday, when he also noted a crime rate higher than 2021 but lower than earlier this year as evidence the city's approach to crime reduction is working.

The permanent replacement for Chief Keith Humphrey, who is set to retire May 20, will be in place by the time voters go to the polls later this year to decide the city's next leader, Scott said.

Humphrey, who said he was "looking forward to retirement and some peace and quiet," advised his successor to rely on their faith and experience while surrounding themselves with a team that has the same philosophy toward law enforcement that they do.

Scott also reiterated that the crime rate in the city is trending downward, when compared to January.

As of May 9, violent crime in the city was 5% higher than that date in 2021, city-provided data showed. That is an improvement over earlier this year, Scott said, when the violent crime rate was around 26% higher than January 2021.

Scott and Humphrey focused on the current rate of violent crime compared to earlier this year, however, citing proactive policing and the city's social programs as the cause of the decline.

"That is what we call a holistic approach, both proactive policing and prevention, intervention and treatment," Scott said.

The mayor cited data from the Centers of Disease Control and Prevention released this week that showed gun violence is killing more Americans than any time in decades.

However, Scott said, "we understand that 'it's happening everywhere else too' is cold comfort" to victims of violence and their families.

Humphrey said there have been 12 killings in Little Rock since April 13, and information indicated that all of them were caused by domestic disputes or violence between acquaintances, not strangers killing each other at random.

"Simple disagreements are leading to the deaths of sons, daughters, husbands and wives," Humphrey said. "We've got to get people to understand that they need to walk away."

Police have made arrests in half of the cases and have a warrant out for the arrest of a seventh suspect, Humphrey said.

"When you commit a crime in Little Rock, you are captured," Scott said.

The department's plan for keeping the number of homicides down in the summer months ahead involves more of the same strategies, Young-Haskins said, with increased patrols in high-crime areas.

"We're asking them to do a lot more than they've ever had to do," Young-Haskins said.

However, police need the community to help them by providing information about crime and other suspicious activity so officers can prevent violence and make arrests, Young-Haskins said.

In March and April, the department's street crimes unit made 77 arrests leading to 102 felony charges, 38 misdemeanor charges and the seizure of $3,045 , Humphrey said.

On the intervention side, Scott again pointed to social programs intended to keep young adults out of crime, as well as summer job programs that give young adults something to do. The city's summer work program has already paid for close to 300 positions for the city's young adults this summer, he said.

The city's social programs will pay off in the years to come, Scott said, and go hand in hand with preventative police work that is geared toward the here and now.