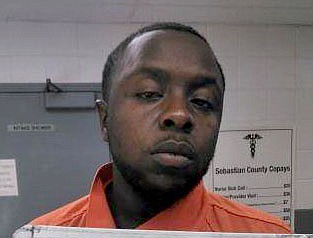 FORT SMITH -- Police have arrested a second man in connection with multiple shootings May 5.

Aric Mitchell, spokesman for the Police Department, said in a news release police arrested Dontrell Krisshun Banister, 24, of Fort Smith on Tuesday on charges of terroristic act and possession of a firearm by certain persons.

Banister is being held on a $250,000 cash bond in the Sebastian County jail., according to an online inmate roster. He is scheduled to appear in court at 9 a.m. Wednesday .

Police responded to a shooting at 1:17 a.m. May 5 stemming from a "rolling disturbance" between several people in at least two vehicles, according to a news release from Mitchell that day. A man believed to be involved in the incident was taken by private vehicle to a local hospital with a gunshot wound.

The man, who was later identified as Michael Collier, 24, was listed in stable condition after surgery to treat a gunshot wound to the head he suffered in the 4000 block of Marshall Drive, according to Mitchell. This shooting was related to "numerous" calls about gunshots. It appeared shooting incidents took place in the 1100 block of North Albert Pike Avenue and 3300 block of Grinnell Avenue, in addition to Marshall Drive.

The Police Department developed Banister as a suspect in the North Albert Pike Avenue shooting, which Mitchell said Tuesday was the catalyst for the gunfire.

Police arrested Steven Derrick Massey Jr., 29, of Fort Smith on May 5 in connection with the Marshall Drive shooting that injured Collier.

Mitchell said police will continue working toward identifying and locating more people involved in the shootings. Residents and business owners who live or work in the involved areas are asked to review their security cameras and call (479) 709-5100 if they have video related to the gunfire. Those with any information that can assist in the investigation are also asked to call.