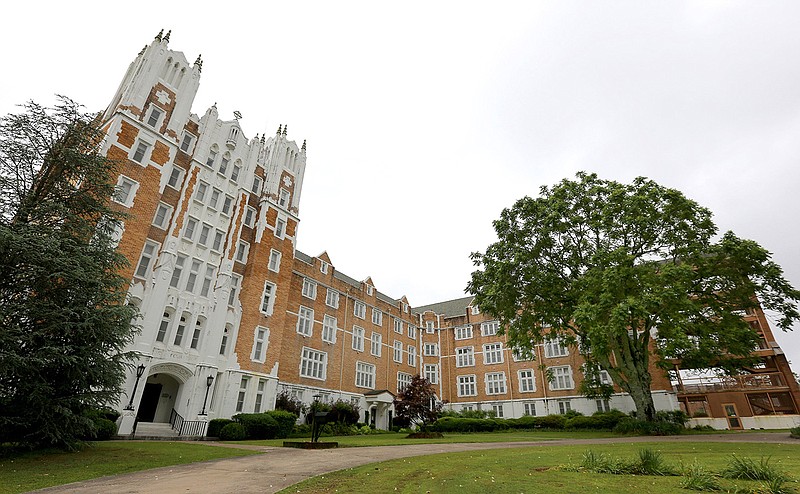 After 97 years, the former St. Scholastica Monastery building in Fort Smith will be demolished.

The five-story, late Gothic revival building has flood, mold and wall damage that make it unsafe and unlivable, according to the monastery. One estimate pegged the restoration cost at about $15 million.

Demolition is to begin June 1.

St. Scholastica Monastery is a community of Catholic Benedictine sisters in Fort Smith.

In 2019, the sisters moved from the historic building into a new, smaller one next door. In a feat of downsizing, they put more than 500 items up for auction, including a pistol from the Spanish-American War, angel statues and an organ with 1,187 pipes.

"After our monastic community had lived in our historic Fort Smith home for almost a century, we made the difficult yet necessary decision to move out of our beautiful home and build a smaller, eco-friendly building that better meets the needs of our sisters, and in 2019 we moved," Sister Kimberly Rose Prohaska, prioress of St. Scholastica, said in a video statement released Tuesday.

But a community is more than a building, said Sister Prohaska.

"It is not brick and walls and hallways and bedrooms," she said. "A community is the people. The sisters of St. Scholastica are the monastery. Over the years, our numbers have declined, our walls have changed, but we are still the same St. Scholastica Monastery that we have always been. We pray for you, our neighbors, family and friends. And we thank you for understanding as we embark on this next journey of St. Scholastica's over 100-year history."

Joe Wasson, a Fort Smith historian, said he was devastated by the news.

"This is a dark, dark day," he said. "I've been worrying about this. I never thought I'd live to see the day. We were all so upset when the Notre Dame Cathedral in Paris caught on fire. That's what that place is to Fort Smith."

"Every time I'd go out there, I'd come home feeling 200 times lighter," he said. "There's something magic out there."

In a message on an Arkansas history listserv, Wasson wrote, "I love the sisters and I understand their needs but this news has gutted me like a fish."

Rachel Patton, executive director of Preserve Arkansas, said it was "extremely unfortunate news." She noted that the building is on the National Register of Historic Places and would be eligible for preservation grant funding.

The old monastery building at 1301 South Albert Pike Ave. was completed in 1924 after the Benedictine sisters relocated from their original Arkansas home in rural Logan County to what was then the outskirts of Fort Smith.

"At the time, the building was a school for day and boarding students for first through 12th grades, in addition to being their monastic home when sisters came back to Fort Smith from their missions throughout Arkansas and adjoining states," according to the news release.

In the late 19th century, the Cairo and Fulton Railroad Company invited monks and nuns to western Arkansas to serve German Catholic immigrants who were being encouraged to settle along the new railroad lines.

St. Scholastica Monastery began in 1879 in the Logan County community of Shoal Creek, more commonly known as New Blaine. In 1924, the sisters moved the "motherhouse" to Fort Smith, 60 miles to the west.

The first part of the building was built in 1923-24, according to St. Scholastica. F.W. Redlich from Oklahoma City was the architect of the five-story building.

"In the original structure completed in September 1924, Saint Scholastica Convent living quarters were in attic floor and temporary chapel on first floor," according to the National Register nomination. "When St. Joseph Academy (established in January 1879) moved from Shoal Creek to Ft. Smith in 1924 and settled into this building it changed its name to St. Scholastica Academy, having classrooms and dormitory space for boarders on the 3rd and 4th floors. The dining room was on the basement floor, partitions with one half for academy girls, the sisters utilizing the other half."

Other additions and alterations have been made to St. Scholastica Monastery, but the architectural integrity of the original convent wing has been retained, according to the nomination.

St. Scholastica constructed a new academy building in 1958, but the academy closed in 1968.

An addition was built on the north side of the original building in 1929, including a chapel, gym, swimming pool and chaplain's quarters.

On the west end of that addition is a six-story tower that has two decorated buttressed towers that rise almost seven stories, according to the National Register nomination form.

"Over the years, the sisters taught in 62 schools in five states, conducted twelve music schools, and operated five hospitals and two orphanages," according to St. Scholastica. "As the number of sisters declined and the median age of sisters increased, the community gradually discontinued their institutional ministries and emphasized their monastic roots as envisioned by St. Benedict in the sixth century. Praying, living, and working together is the main ministry of the sisters."

The monastery currently operates Hesychia House of Prayer in Shoal Creek (now New Blaine) on the grounds of the original site of the monastery, sponsors a scholarship program for girls in Esquipulas, Guatemala, and helps in Hispanic ministry, according to St. Scholastica.

Print Headline: Monastery to be torn down in June