The Faces Of The Blues: Icons live on in resin casts, photos, music 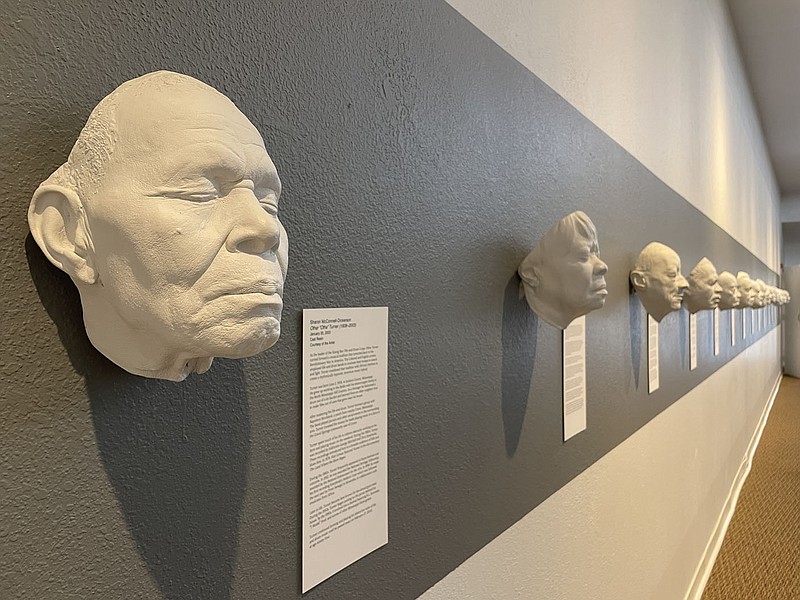 Orson Weems, executive director of the Music Education Initiative who currently opens the 214 gallery each day for this exhibit, says that McConnell-Dickerson asked him to always say “good morning” to the casts, since they have each captured the living spirit of the person embodied. (NWA Democrat-Gazette/April Wallace)

‘A Cast of Blues’

If you've not been lucky enough to be in the same room as Robert Johnson, Koko Taylor, Bobby Blue Bland or other blues icons, you might feel as if you have after visiting "A Cast of Blues."

A total of 15 resin-cast faces now line a wall at 214 By CACHE, the gallery space at 214 S. Main St. in Springdale formerly known as the Arts Center of the Ozarks. The exhibition also includes a number of photographs by Ken Murphy featuring other musical artists from the Mississippi Delta.

The faces of blues legends are finely detailed, giving visitors a very clear picture of what they looked like the day the cast was made, something that goes well beyond the shape of each face. Strands of hair, beards, uniquely shaped ears--everything is exactly as it was.

Orson Weems, executive director of the Music Education Initiative, helped bring the exhibit to Northwest Arkansas and says a group of physicians came to see the casts, and they were amazed at the level of detail.

"They were like 'Wait a minute, I'm seeing veins, pimples and moles,'" Weems says. You can't miss Bobby Blue Bland's soul patch and thin mustache. Artist Sharon McConnell-Dickerson captured everything, Weems says, through her extremely fast alginate process. "When they look at these casts, notice that there are no air holes for a straw like you see in a mask or other casts, for them to breathe through; she did it so quickly."

Altogether Dickerson created a total of 60 casts to memorialize blues musicians, these 15 in particular were curated by Chuck Haddix, music historian and director of the Marr Sound Archives, and have been touring since 2014 through the Kansas City-based Mid-America Arts Alliance.

"I like my masks to be touched," McConnell-Dickerson says. "There's something about the flesh that when you look in the mirror, you're seeing a flat image. But the molding material captures every exact detail of your face, even pores, scars, the texture of the skin ... it's made three dimensional. There's detail the human eye misses that you can only feel with your hands."

McConnell-Dickerson made the casts over the course of 16 years after she lost her sight. She hopes her exhibit will cause various museums to rethink the accessibility of their exhibits. "A Cast of Blues" has an audio tour version that reads the text to visitors, which can be especially beneficial for children who aren't reading yet or adults who have difficulty seeing and/or reading. The exhibit also places the items at a low enough level to encourage more people to touch them.

"Many times exhibits don't consider younger visitors," she says. "If you're looking at a painting way up there, or in the case of the masks, you'd be looking up noses, which would be no fun for them."

Placing them lower makes those in wheelchairs and others feel more included and considered, she says.

Getting the legendary musicians to agree to the process sometimes took a lot of convincing. As McConnell-Dickerson spent a little extra time with each of them for the casting process, she got to know more intimate parts of their personal history.

"The friendship forms after casting, having had an up-close and personal interaction where the subject is ... allowing me to touch their face and cover their eyes, mouth, ears and (experience) sensory deprivation," McConnell-Dickerson says. "There's a lot of trust that's extended to me ... an exchange of energy."

Weems says the cast faces help carry on an important part of the history of the South and of the blues. Bringing them to an audience who's never seen them and may have very little handle on the influence of the blues is exactly what the Music Education Initiative is about.

"We're sharing things people here would not normally get to see," he says.

You don't have to know anything about the blues to experience this gallery. Each cast and photo has a generous placard telling guests where the musician grew up and what led to their rise to fame. Many of them have connections to Arkansas and to each other.

Of the photographs, only one is directly next to the corresponding blues icon's face, an image of the grave of Robert Johnson, the blues legend who's known for his deal with the devil at the crossroads. His fans made many false headstones over the years, and the original one was only traceable due to a connection with the wife of a man who helped bury him, the caption reads.

Many of the descriptions shed light on the struggle the artists went through only to be recognized fairly late in life, or sometimes after their deaths.

Hubert Sumlin, for example, was raised in Arkansas and became Howlin' Wolf's guitarist for years. He was inducted to the Blues Hall of Fame just a few years before his death. But the fact that the Rolling Stones paid for his funeral points to his sheer influence on the music industry, Weems says.

Ruth Brown was another who quietly made a big impact but hardly made any money, he says, which is why many Black artists went on tour. At one point Atlantic Records was known as "The House that Ruth Built," due to her music. It wasn't until her appearance in "Hairspray" that Brown got proper recognition, Weems says, when she was awarded both a Tony and a Grammy.

There are a number of connections between Ken Murphy's photographs of musicians to the icons on the walls. In one, "CeDell Davis and Lightnin' Malcolm jamming at the Juke Joint Festival," Malcolm sports a T-shirt that reads "Cedric Burnside," referring to the artist who won a Grammy less than a month ago. Burnside's grandfather, R.L. Burnside, is portrayed in one of the blues casts. In another photograph, an artist holds a guitar made by Super-Chikan Johnson, who creates unique and ornate instruments, while yet another photograph features the guitar maker himself with an array of his custom banjos and guitars behind him.

In a way, the photographs bridge the gap between the icons and the new blood.

"The way this is put together, you have the young and old in these," Weems says. "They're picking up from where the legends left off. Their torches have been lit.

"I want people to come and appreciate [this exhibit], honor and respect this music from these artists," he adds. "To know that this (musical legacy) has to go on, it can't be marginalized or minimized. Blues music is the root of music." 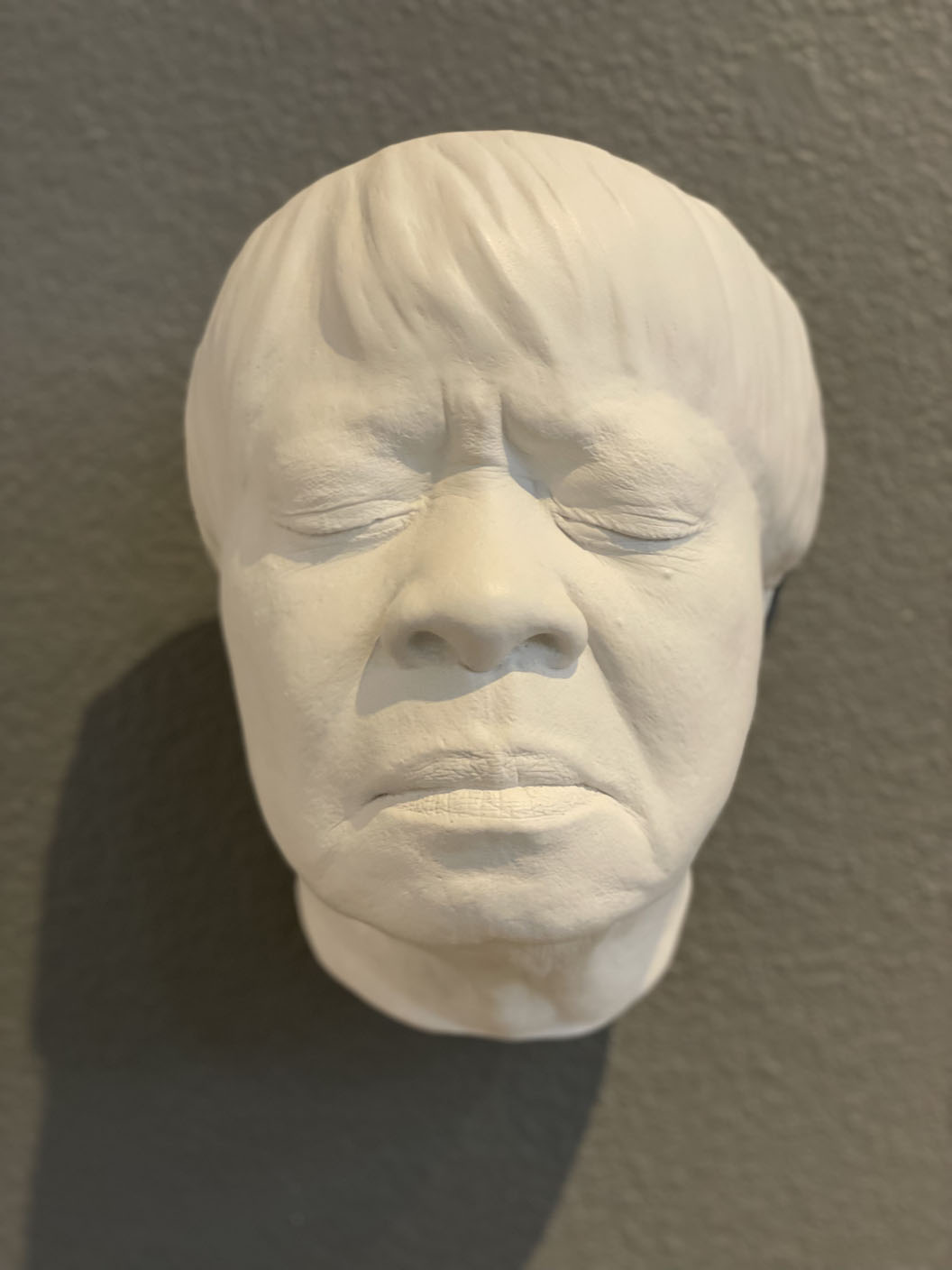 Artist Sharon McConnell-Dickerson makes her life masks a little differently from others. For one thing, she doesn’t use cutoff straws in nostrils to keep materials from blocking them. The straws are a quick way to injure someone and also create stressed out facial expressions, she says. Dickerson uses a nontoxic material for her masks called alginate, which is a mixture of seaweed and water, what dentists use to make impressions of teeth. Pictured is Koko Taylor. (NWA Democrat-Gazette/April Wallace) 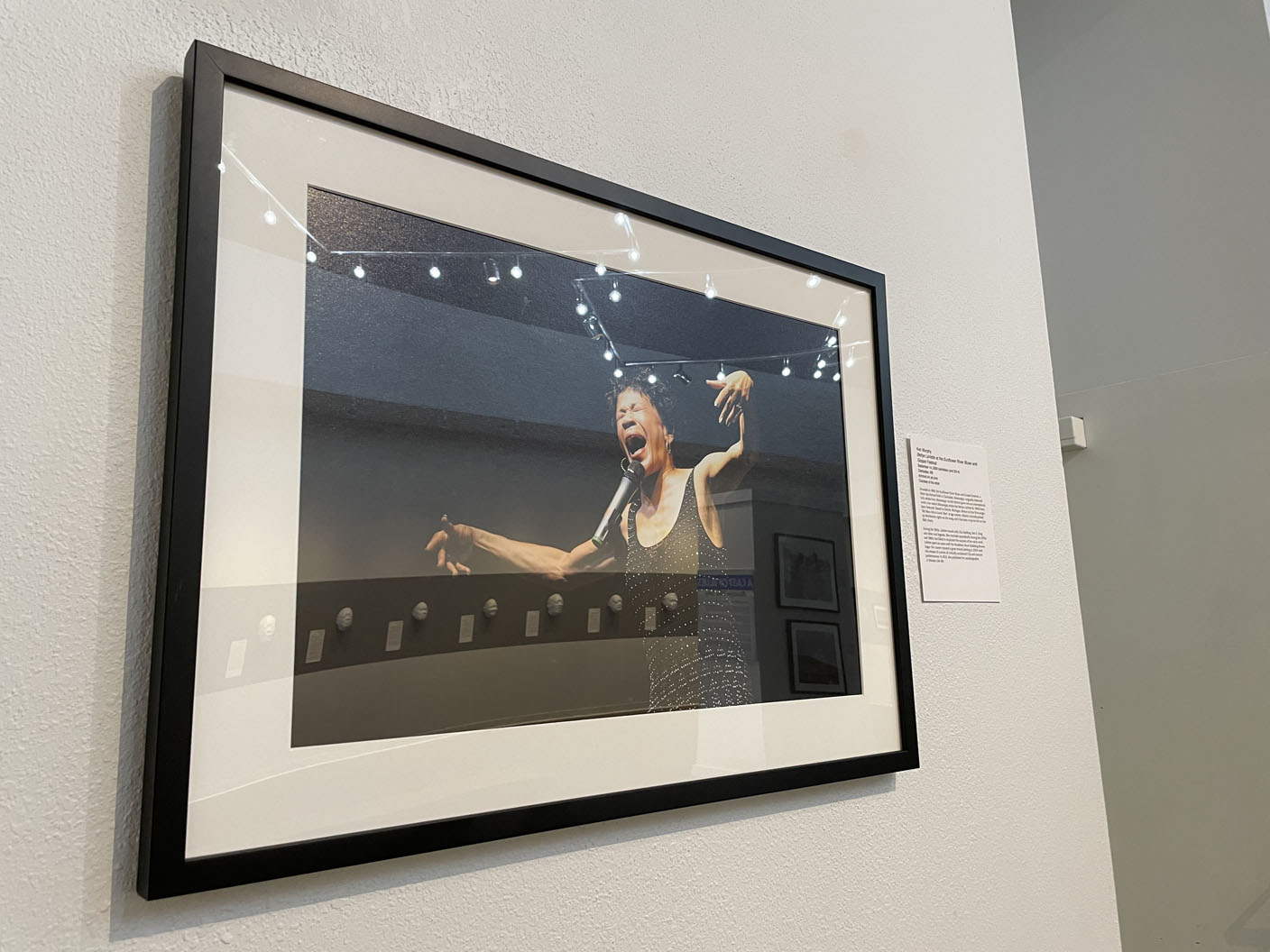 This Ken Murphy photo of Betty LaVette so deftly captured her enormous performing energy that it deserved a wall all to itself, says Orson Weems. (NWA Democrat-Gazette/April Wallace) 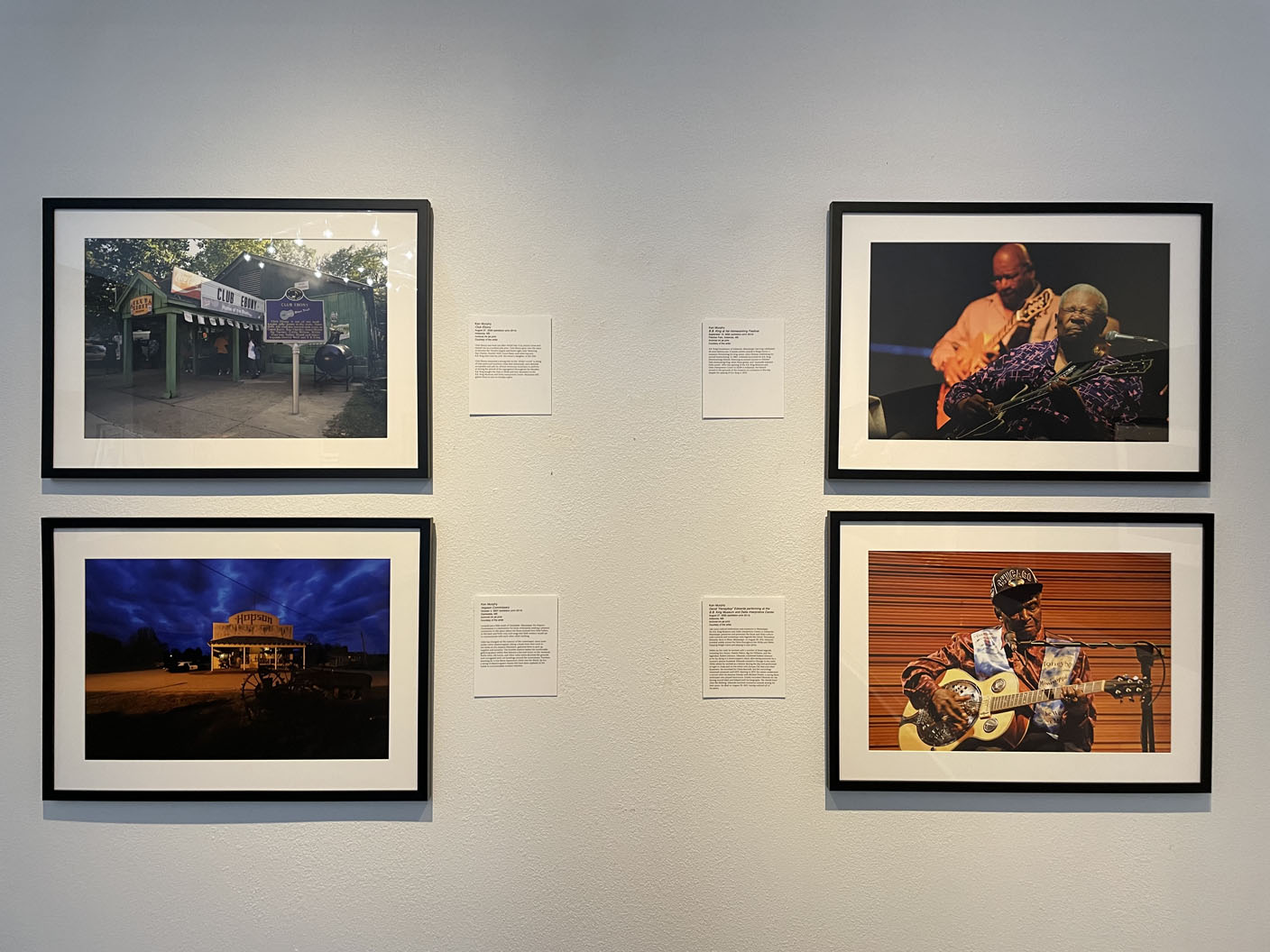 A few of Ken Murphy’s photos above include “Club Ebony,” the modest juke joint that became famous for featuring Ray Charles, Howlin’ Wolf, Count Basie and more; “B.B. King at his Homecoming Festival” in Indianola, Miss.; “Hopson Commissary,” which is indicative of the place where blues evolved from field songs; and “David ‘Honeyboy’ Edwards performing at the B.B. King Museum and Delta Interpretive Center.” (NWA Democrat-Gazette/April Wallace) 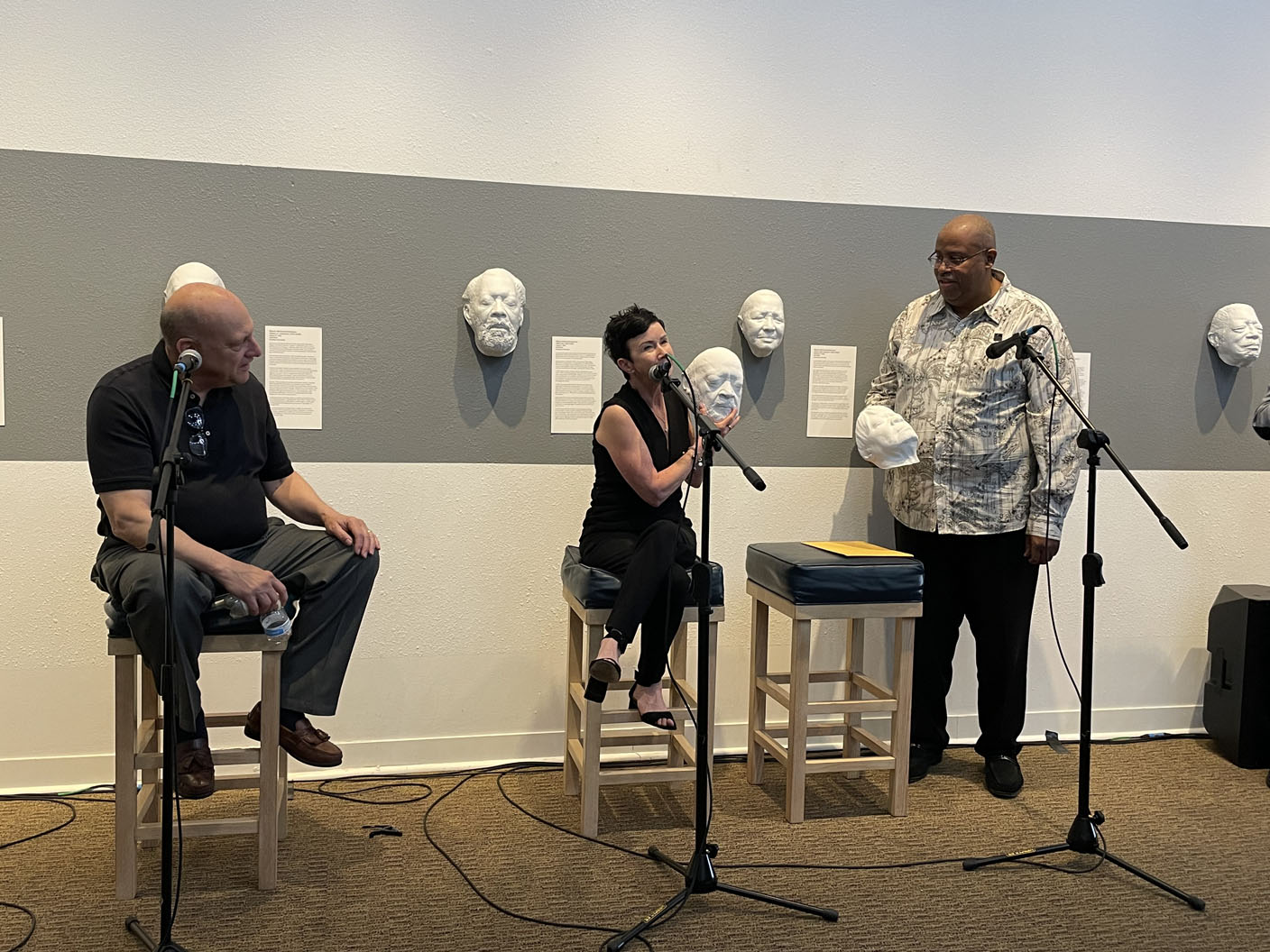 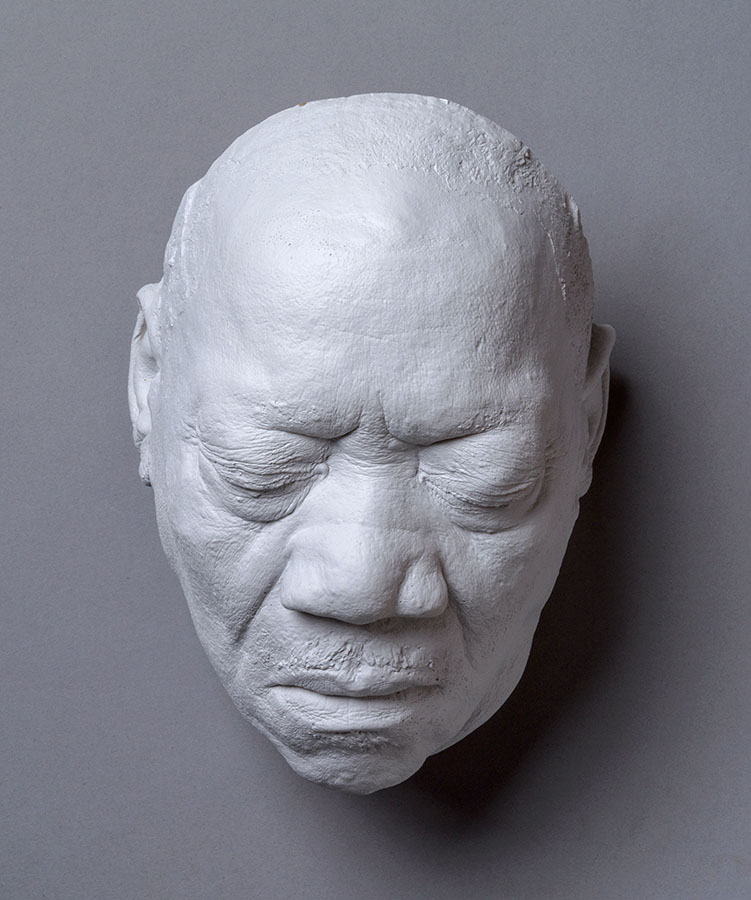 It took Sharon McConnell-Dickerson six months of correspondence through occasional phone calls with Bobby Blue Bland to get him to agree to a casting, but after it was done, the two remained friends for the rest of his life. Bland visited McConnell-Dickerson at her home, once called her on stage during a concert and dedicated the playing of “Ain’t No Sunshine When She’s Gone” to her. The resin cast is part of an exhibit titled “A Cast of Blues,” on show at 214 By CACHE in Springdale. (Courtesy Photo) 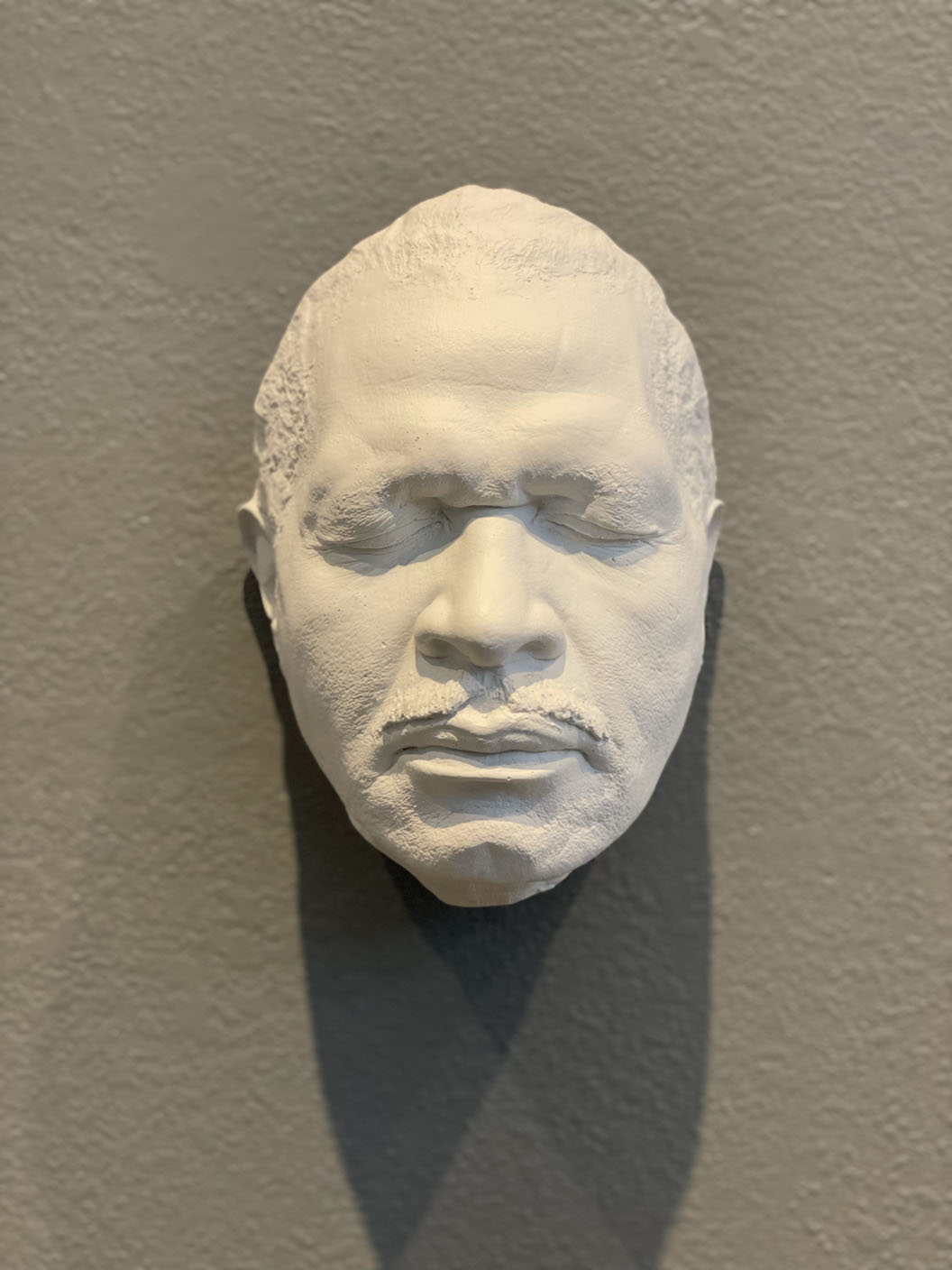 There are a couple blues legends that McConnell-Dickerson was unable to cast in her 16 years of this project. Etta James declined due to her age, she says. B.B. King agreed to the project in person, but the request was turned down by his attorney. Pictured here is Bobby Rush. (NWA Democrat-Gazette/April Wallace) 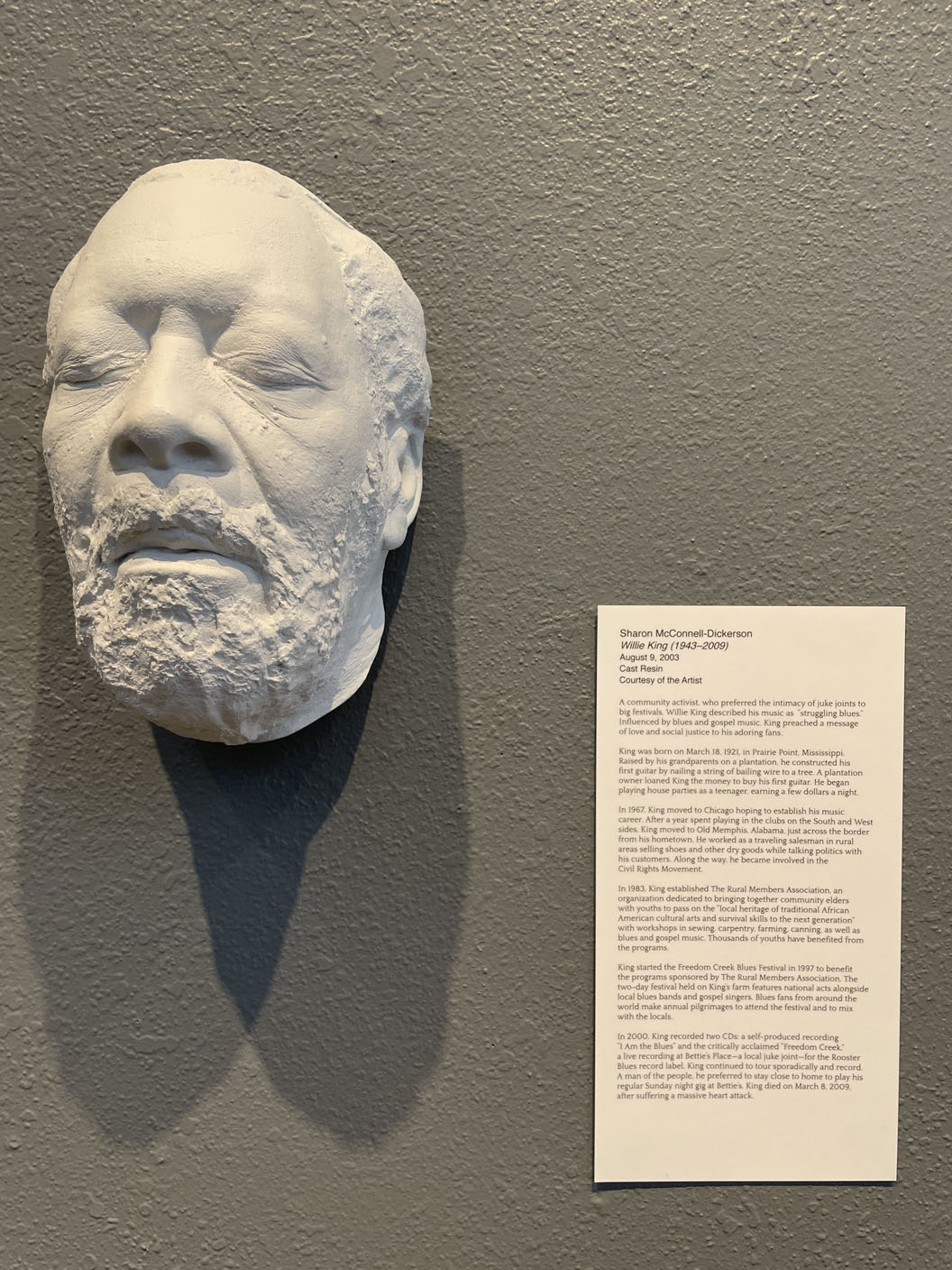 Willie King was a community activist and described his music as “struggling blues,” influenced by blues and gospel music. He was raised by his grandparents on a plantation and constructed his first guitar by nailing a string of bailing wire to a tree. (NWA Democrat-Gazette/April Wallace) 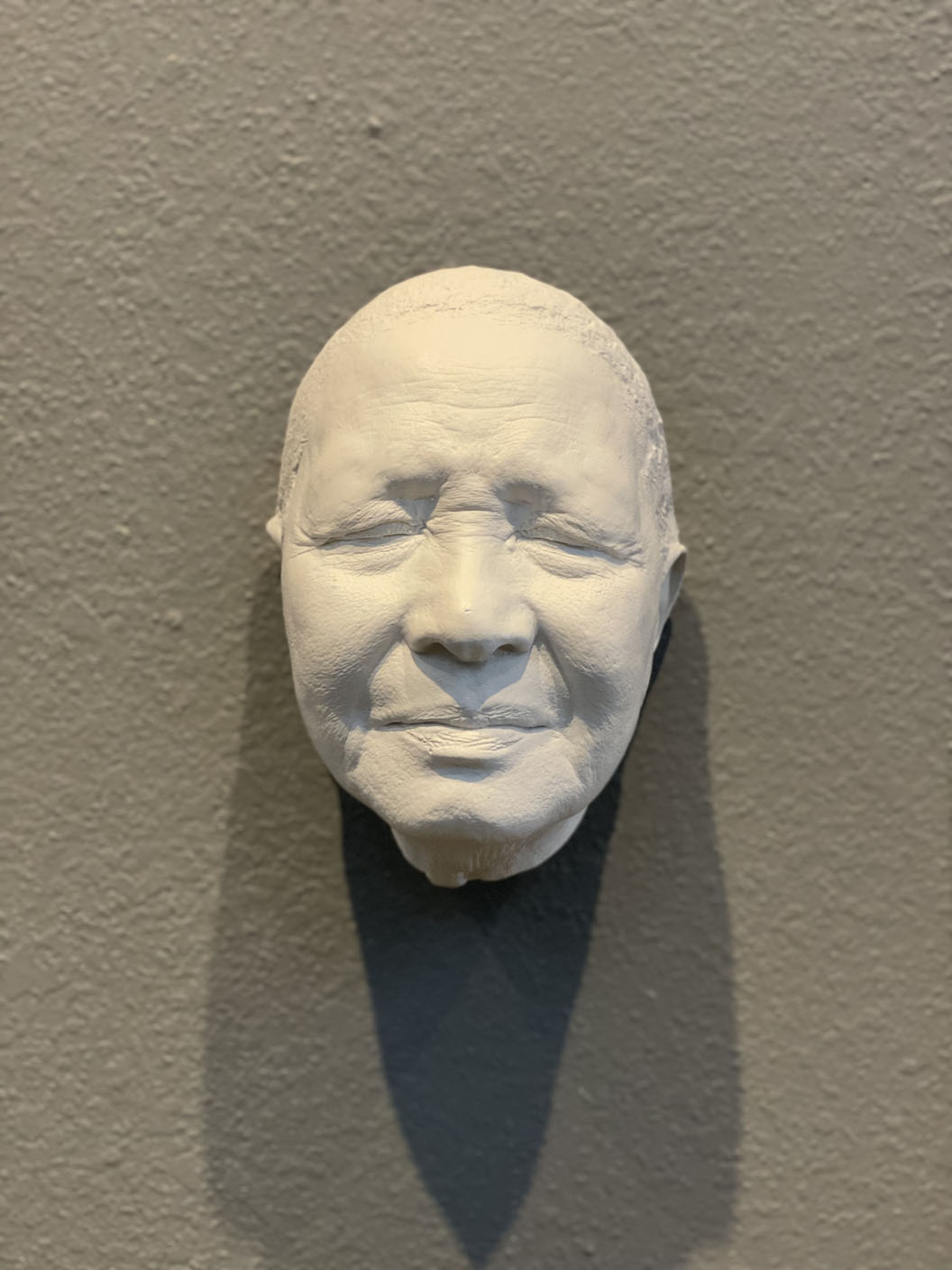 Jessie Mae Hemphill was an independent, fiesty woman who established her career in the world of country blues at a time when the field was dominated by men, according to “A Cast of Blues” placard. (NWA Democrat-Gazette/April Wallace) 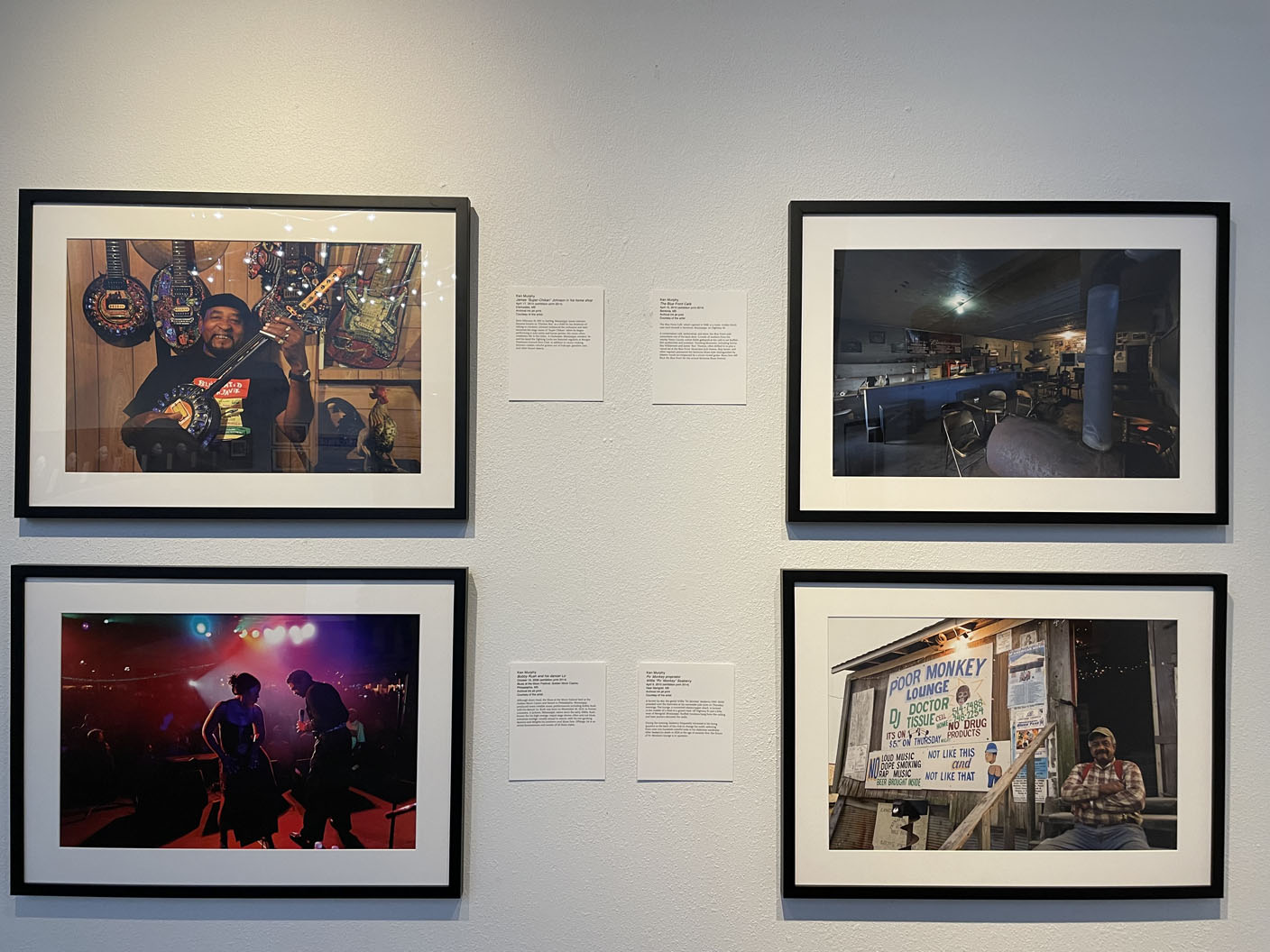 Pictured here are James “Super-Chikan” Johnson in his home shop with his unique guitars; The Blue Front Cafe in Bentonia, Miss.; Bobby Rush and his dancer Lo; and Willie “Po’ Monkey” Seaberry, all taken by Ken Murphy. (NWA Democrat-Gazette/April Wallace) 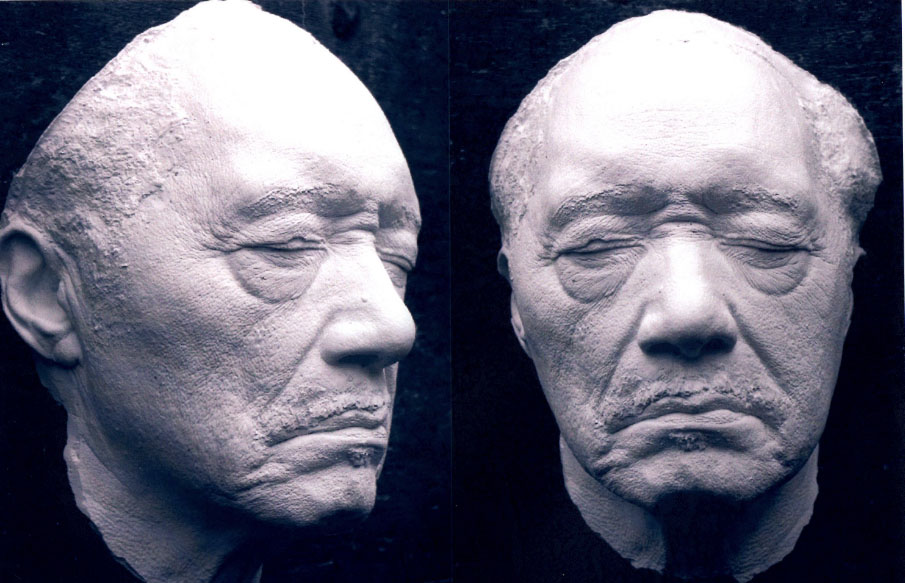 This life-cast portrait of R.L. Burnside was made in 2003 by artist Sharon McConnell-Dickerson. She spent 16 years immortalizing blues artists in resin casts and created a grand total of 59. The 214 BY CACHE gallery in Springdale houses 15 of them, a collection that has been touring for nine years. (Courtesy Photo)
More News

Print Headline: The Faces Of The Blues