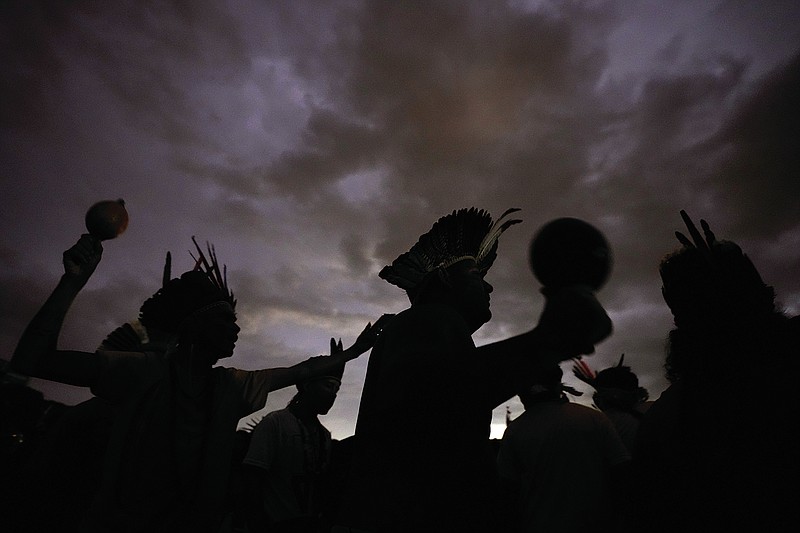 FiLE - Indigenous people take part in a march during the 18th annual Free Land Indigenous Camp, in Brasilia, Brazil, Wednesday, April 13, 2022. A fast-expanding network of antennae is empowering Indigenous groups to use phones, video cameras and social media to galvanize the public and pressure authorities to respond swiftly to threats from gold miners, landgrabbers and loggers. (AP Photo/Eraldo Peres.File)

RIO DE JANEIRO -- It was dusk on April 14 when Francisco Kuruaya heard a boat approaching along the river near his village in Brazil's Amazon rain forest. He assumed it was the regular delivery boat bringing gasoline for generators and outboard motors to remote settlements like his. Instead, what Kuruaya found was a barge dredging his people's pristine river in search of gold.

Kuruaya had never seen a dredge operating in this area of the Xipaia people's territory, let alone one this massive; it resembled a floating factory.

Kuruaya, 47, motored out to the barge, boarded it and confronted the gold miners. They responded in harsh voices, and he retreated for fear they were armed. But so was he -- with a phone -- the first he'd ever had. Back in his village Karimaa, his son Thaylewa Xipaia forwarded the photos of the mining boat to the tribe's WhatsApp chat groups.

"Guys, this is urgent!" he said to fellow members of his tribe in an audio message The Associated Press has reviewed. "There's a barge here at Pigeons Island. It's huge and it's destroying the whole island. My dad just went there and they almost took his phone."

Several days' voyage away, in the nearest city of Altamira, Kuruaya's daughter Juma Xipaia received the frantic messages. She recorded her own video with choked voice and watery eyes, warning that armed conflict was imminent -- then uploaded it to social media.

In a matter of hours, word was out to the world.

The episode illustrates the advance of the internet into vast, remote rain forest areas that, until recently, had no means of quickly sharing visual evidence of environmental crime. A fast-expanding network of antennae is empowering Indigenous groups to use phones, video cameras and social media to galvanize the public and pressure authorities to respond swiftly to threats from gold miners, land-grabbers and loggers.

Until now Indigenous communities have relied on radio to transmit their distress calls. Environmental and Indigenous rights groups then relayed these to the media and the public. But the nonprofit groups have been maligned by Brazil's far-right President Jair Bolsonaro, who advocates legalizing mining and land leasing in protected Indigenous territories. He has castigated the organizations as unreliable actors, out of touch with Indigenous people's true desires and on the payroll of global environmental do-gooders.

Video and photos coming directly from Indigenous people are harder to dismiss, and this is forcing authorities as well as the public to reckon with the reality on the ground.

"When used properly, technology helps a lot in real-time monitoring and denouncing," said Nara Bare, head of the group Coordination of Indigenous Organizations of the Brazilian Amazon, in a telephone interview. "The external pressure to make the federal government act in the Xipaia territory was very important. Technology has been the main tool for that."

Connectivity is not only enabling whistle-blowing on social media. Brazil's Federal Prosecutor's Office has set up a website to register reported crimes and receive uploaded visual material. Previously people in remote communities have had to make the long and expensive trip to the nearest city that has a federal prosecutor's office.

Xipaia territory is part of a pristine rain forest area known as Terra do Meio (Middle Earth) that is dotted with dozens of Indigenous and traditional river communities. Internet connection there was rare until mid-2020, when a group of nonprofit groups, including Health in Harmony and the Socio-Environmental Institute, financed installation of 17 antennae throughout the vast region.

Priority was given to communities with either health centers or market hubs for the production and sale of forest products, such as Brazil nuts. Signal can be painfully slow, especially on rainy days, yet it has connected people who were previously off the grid and is enough for photos and videos to trickle out of the forest.

"The strategy was to improve communication and avoid unnecessary trips to the city," said Marcelo Salazar, Health in Harmony's Brazil program coordinator. "The internet makes it easier for health, education, and forest economy issues." Fighting environmental crime was an added benefit, he added.

Four out of five Xipaia communities are now connected. Karimaa, the village where the barge was first spotted, has had internet since July 2020. Just three days after installation, when a teenager injured his head, a city doctor was able to assess his condition using photos sent over WhatsApp. That avoided a costly, complicated medevac during the covid-19 pandemic.

But the case of the mining dredge marked the first time the Xipaia used the internet to protect their territory. In addition to sounding the alarm, four villages used WhatsApp to quickly organize a party of warriors to confront the miners. Painted with urucum, a local fruit that produces a red ink, and armed with bows, arrows and hunting rifles, they crammed into a small boat, according to Juma Xipaia. By the time they reached the location where the barge had been, however, it was gone.

Some 800 miles to the west, in the Amazonian state of Rondonia, internet access enabled the Uru-Eu-Wau-Wau people to take classes in photography and video online so they could chronicle deforestation by land-grabbers. The three-day training in 2020 was held via Zoom.

That effort produced the documentary "The Territory," which won awards at this year's Sundance Film Festival, Copenhagen International Documentary Film Festival and others. Throughout its production, American director Alex Pritz relied on WhatsApp to communicate with his newly trained camera operators.

Tangaai Uru-Eu-Wau-Wau is a teacher-turned-cameraman who traveled to the Danish festival and later spoke with the AP via WhatsApp from his remote village. He said the film is changing people's perception of Brazil's indigenous people. "In Copenhagen... I received many questions. They knew about Brazil's natural wonders, but didn't know about Indigenous peoples who fight for their territories."

Elsewhere in the Amazon, the internet has yet to arrive. So when illegal gold miners killed two Yanomami tribe members in June 2020, news of the crime took two weeks to arrive due to the area's remoteness. To avoid a repeat of that, Yanomami organizations have been seeking better connectivity. After Palimiu village along the Uraricoera River suffered a series of attacks committed by miners in May 2021, the Yanomami managed to install an antenna there. Since then, the violence has eased.

Bolsonaro's repeated promises to legalize mining and other activities on Indigenous lands have fueled invasions of territories, which are often islands of forest amid sprawling ranches. Indigenous and environmental groups estimate there are some 20,000 illegal miners in Yanomami territory, which is roughly the size of Portugal. Bolsonaro's government claims that there are 3,500.

Deforestation in Brazil's Amazon surged 76% in 2021 compared to 2018, the year before Bolsonaro took office, according to official data from Brazil's space agency, which uses satellites to monitor forest loss.

Most internet connections in the Amazon remain slow, even in mid-sized cities. That may soon change. Last November, Brazil's Communications Minister Fabio Faria held a meeting with billionaire Elon Musk to discuss a partnership to improve connectivity in rural areas of the world's largest tropical rain forest.

The communications ministry, however, says the talks have not evolved and no progress has been made. Musk's company SpaceX did not respond to emailed requests for comment.

Some worry that Indigenous groups like the Xipaia won't be the only beneficiaries of greater internet penetration in the Amazon region. Illegal miners often co-opt local Indigenous leaders, communicating surreptitiously on messaging apps. The conversations, sometimes aided by clandestine networks, can enable miners to hide heavy machinery, or tip them off to impending raids by authorities, allowing them to flee.

In Roraima state, which is where most of the Yanomami territory lies, the AP contacted one internet provider that offers wifi to an illegal gold mine for $2,600, plus $690 per month. Clandestine small craft fly the equipment in for installation.

"It's a double-edged sword," said Salazar, of Health in Harmony, speaking of increased connectivity.

But for Juma Xipaia, the new connection means added protection and visibility for her people. After she posted her tearful video, it racked up views and was picked up by local and international media. Within two days, an airborne operation involving the Federal Police, the national guard and environmental agencies swooped in. They located the dredge hidden behind vegetation on the banks of the Iriri River with seven miners aboard.

In a country where environmental crime in the Amazon usually goes unchecked, the speedy, successful response underscored the power of Indigenous networks.

"After making a lot of calls for help, I decided to do the video. Then it worked. The telephone didn't stop ringing," Juma Xipaia said by phone. "It was very fast after the video." 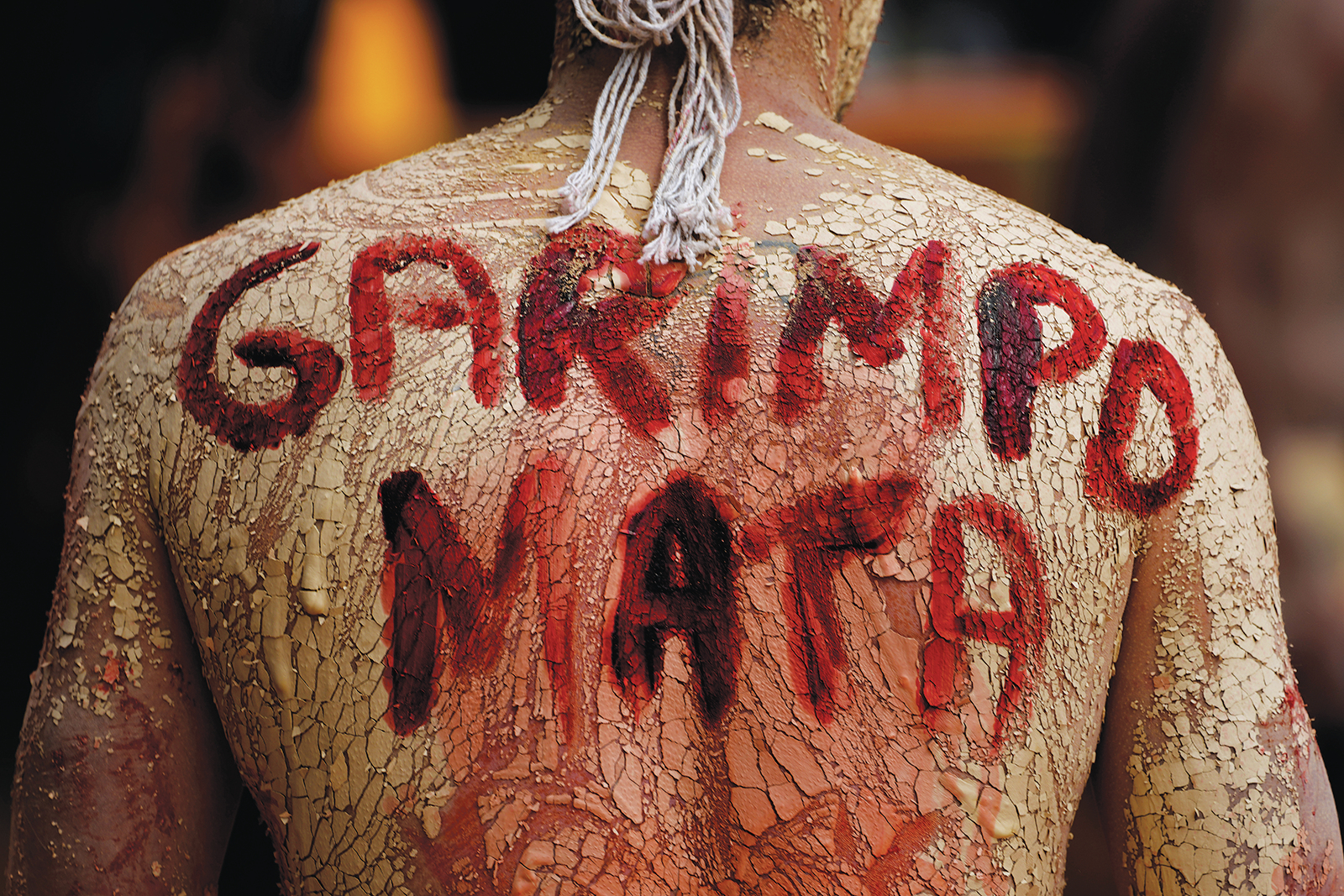 FILE - An Indigenous man with the phrase painted on its back that reads in Portuguese "Mining Kills," participates in a protest against the increase of mining activities that are encroaching on his land, in front of the Ministry of Mines and Energy, in Brasilia, Brazil, Monday, April 11, 2022. A fast-expanding network of antennae is empowering Indigenous groups to use phones, video cameras and social media to galvanize the public and pressure authorities to respond swiftly to threats from gold miners, landgrabbers and loggers. (AP Photo/Eraldo Peres, File) 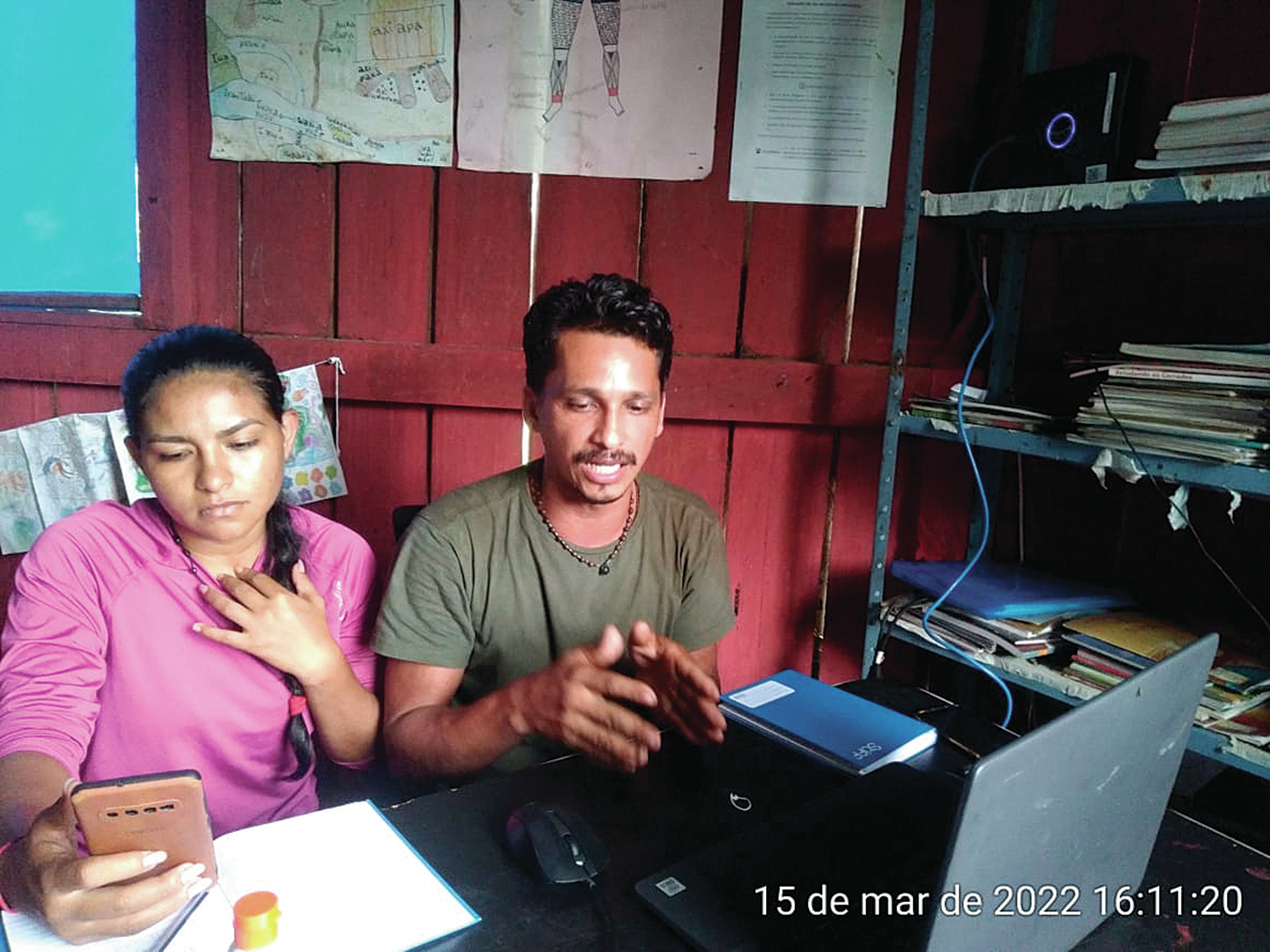 In this photo provided by Kwazady xipaya, president of the Indigenous Association Pyjahyry xipaya Aldeia tukamã, Indigenous leaders Kwazady Xipaia Mendes and Juma Xipaia participate in an online meeting with the Federal Prosecutors' Office, in the Karimaa village of Altamira, Para state, Brazil, March 15, 2022. A fast-expanding network of antennae is empowering Indigenous groups to use phones, video cameras and social media to galvanize the public and pressure authorities to respond swiftly to threats from gold miners, landgrabbers and loggers. (Warawara Xipaya dos Santos/Indigenous Association Pyjahyry xipaya Aldeia tukamã via AP)