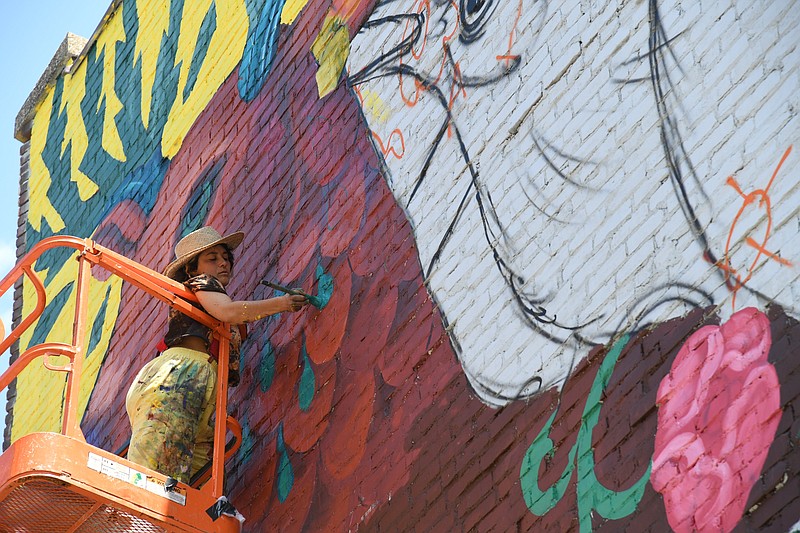 Artist Danaé Brissonnet uses a boom lift to paint the upper part of a new mural at 110 Central Ave. - Photo by Tanner Newton of The Sentinel-Record

"It's doing great. I am really happy," Brissonnet, who is from Quebec, Canada, said. "The wall is really textured, though, so I kind of like needed to adapt myself but now I'm like, I'm rolling."

The Historic District Commission voted unanimously on April 21 to issue a Certificate of Appropriateness for the mural, with a few agreed-to alterations. The commission decided at its meeting last month to reconsider its decision to grant the certificate for the mural following objections placed by the building's neighbor, St. Mary of the Springs Catholic Church. Brissonnet agreed to remove two elements of the proposed mural, including one depicting a historic fire downtown.

Brissonnet said she will work on the mural for the next couple of weeks, while Botkin said he is not sure how long he will be in town.

She has been back in Hot Springs since Tuesday getting ready for the project. "I had a lot of supplies from a mural I did in New Orleans, so I brought that here," she said.

"I think it is going to take me two weeks and a half," she said, noting she plans to spend this week filling in the major colors, "and then the next week, then I'm starting all the details."

Bob Graham, the owner of the building, which is also home to Kollective Coffee + Tea, co-funded the mural with the Downtown Association of Hot Springs.

"I'm thrilled to death and excited. Looking forward to its completion, and actually, the best part is watching it in progress and the reactions of people coming by and stopping to look at it," Graham said. "We're already having repeat business of people coming by, taking another picture, it's fantastic."

Brissonnet said Botkin is "this amazing friend that I've admired for years" and his help on the mural "gives a lot of energy too," noting, "his work is amazing."

"The wall's quite textured, pretty uneven brick surface, so really what I'm doing is just helping her put flat colors on it," Botkin said.

When not helping with the mural, Botkin is also painting a mural on his own car, which is parked next to the mural.

"I just finished a big mural in Dallas, and I've known Danaé for a long time, and she's like 'Come to Arkansas,' so this is my Dallas detoxification, just sitting here painting my car, and I'm doing a weird octopus on it, and other things as they emerge," Botkin said.

Graham was also enthusiastic about seeing a car being painted next to his building.

"I love it," he said. "This is just a beautiful community effort going on, community of the world."

While he has painted murals for the past 15 years, Botkin said he has never painted one in Arkansas. "Well, I've never been to Arkansas before," he said, but he is "pretty much in love" with the state after a few days here.

"I've had a lifelong interest in Arkansas, specifically drawn to the crystal deposits, the quartz crystal, don't ask my why, but this has just been a kind of fantasy, like 'I'm going to go down to Arkansas, not necessarily even to dig but just look at crystals,' so this is a fulfillment of a lifetime dream," Botkin said.

"It's gorgeous, truly gorgeous, and this town, Hot Springs, is really interesting. It's an architectural gem, the infrastructure here is remarkable, totally unexpected for a federal park," he said. "I'm really impressed by this place."

Brissonnet said she hopes to get to experience some of the Arts & The Park festival while she is in Hot Springs, but each day, when it is not raining, she will work on the wall between 8 a.m. and 7 p.m.

"Brissonnet agreed to make some changes to her design after meeting with members of the church.

"There was a guy sitting on the pond, and so I took this off, but then the right part of the mural was a little empty, so I changed it. I did the, instead of the leg in front, then we saw the leg, of the deer, the leg in the back, and there's like another bird coming out instead of a little man, and the apple blossom and the flowers are inside the body of the animal, so I just took the elements and like restructured them," she said.

There were also concerns about how bright the mural would look, but those were based on the digital concept art. "The thing is like when you do a computerized sketch with color, it always looks kind of crazy," Brissonnet said, but on the wall "it always looks more natural."

Graham said the delay might have been for the best, though, since the project is now taking place at the same time as Arts & The Park.

Brissonnet has also worked on a different kind of art form in Hot Springs: puppetry.

Before she started painting murals, she said, puppets were a passion of hers, and she did a show Saturday at Central Theatre, performing during the intermission of a Foul Play Cabaret show. 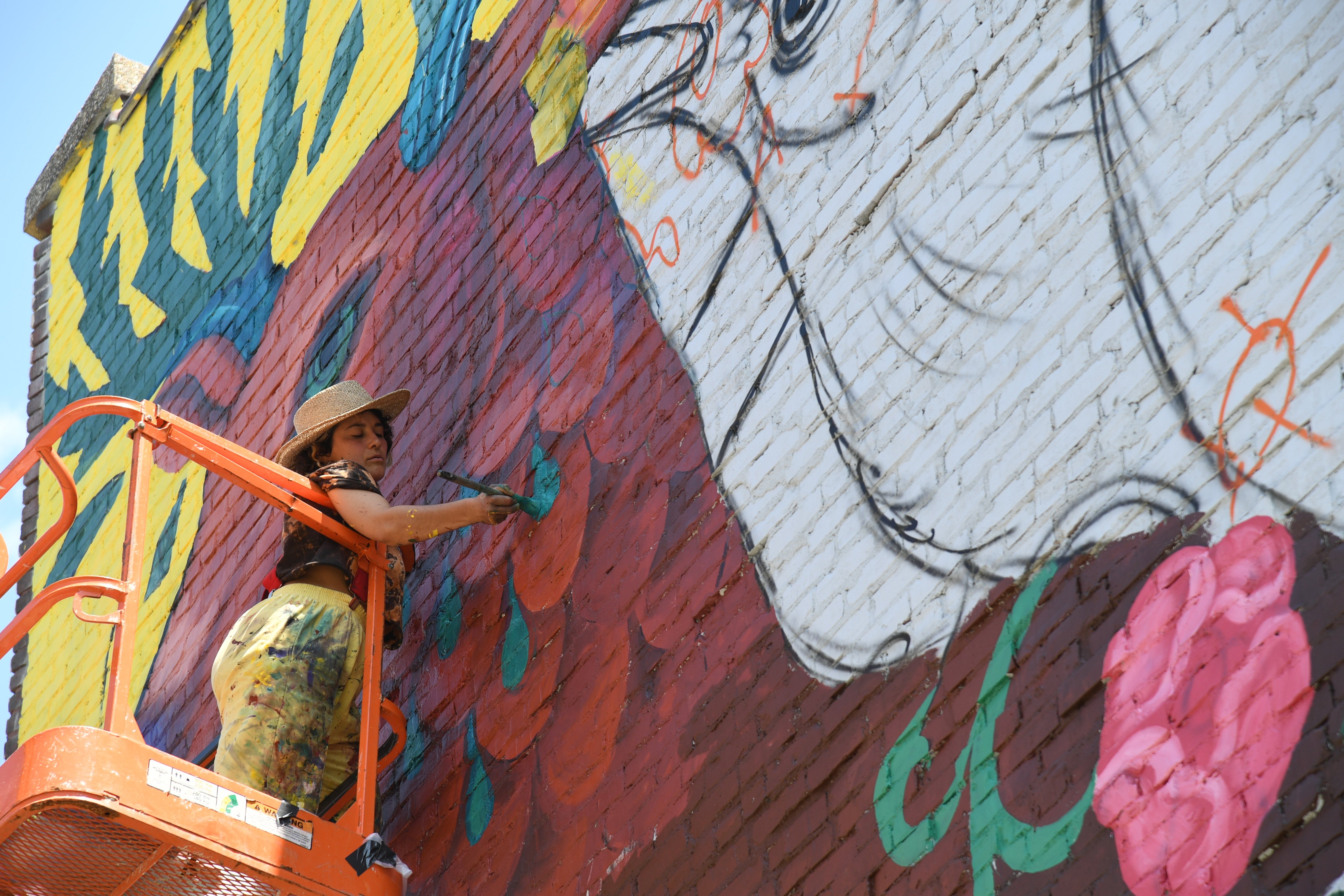 Artist Danaé Brissonnet uses a boom lift to paint the upper part of a new mural at 110 Central Ave. - Photo by Tanner Newton of The Sentinel-Record 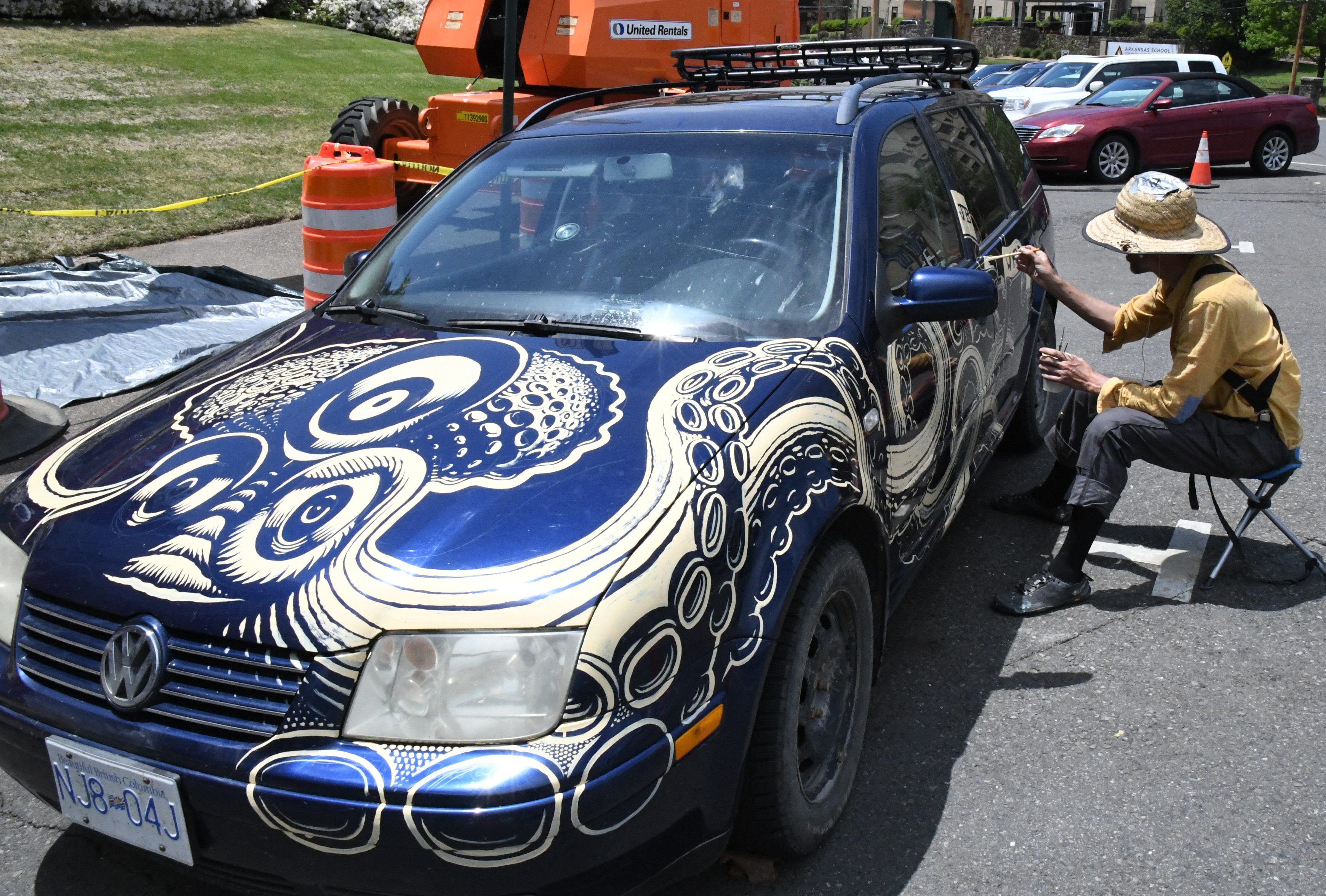 Jason Botkin, who is helping with a new mural at 110 Central Ave., paints an octopus on his car. - Photo by Tanner Newton of The Sentinel-Record 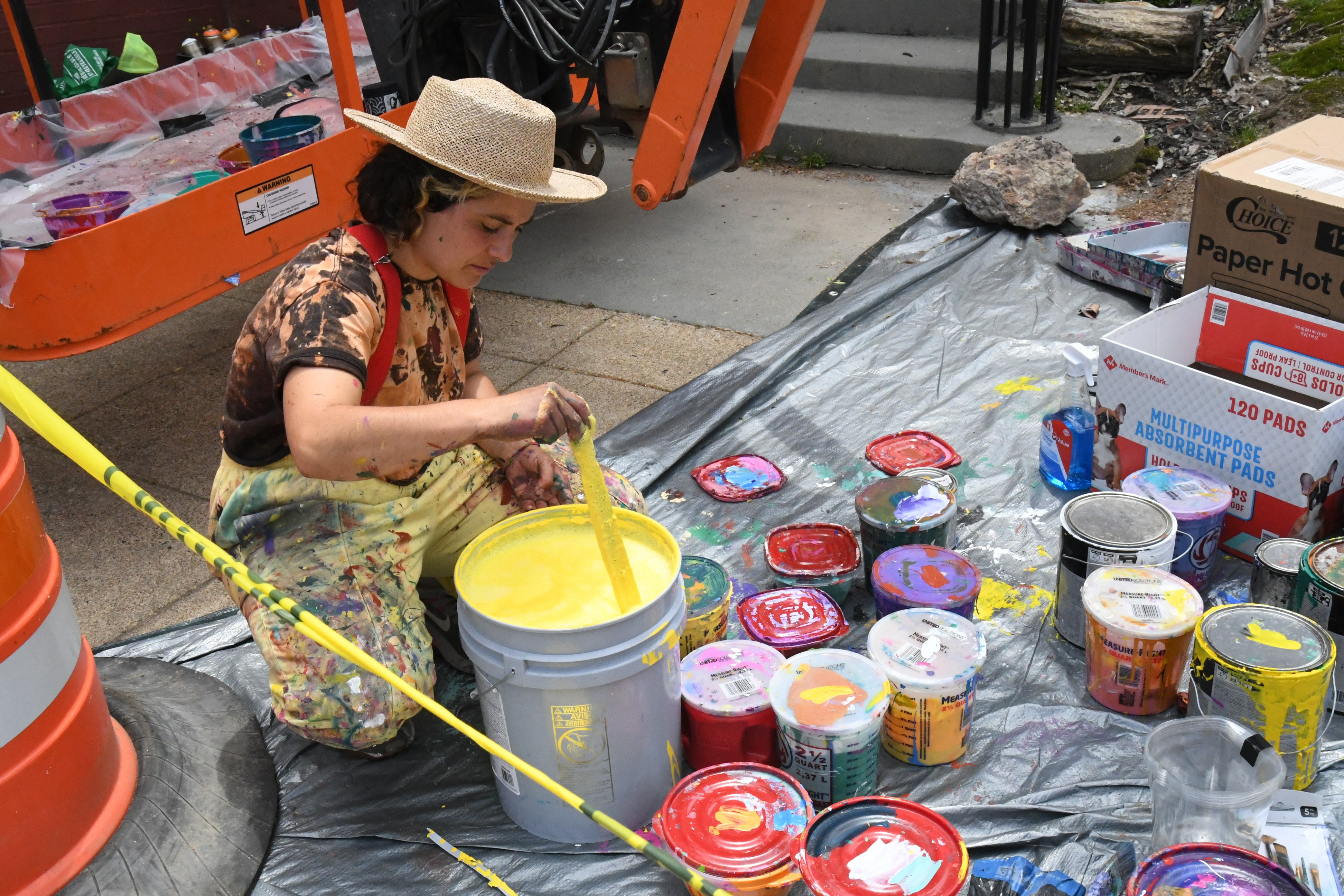 Artist Danaé Brissonnet mixes paint before working on a new mural at 110 Central Ave. - Photo by Tanner Newton of The Sentinel-Record