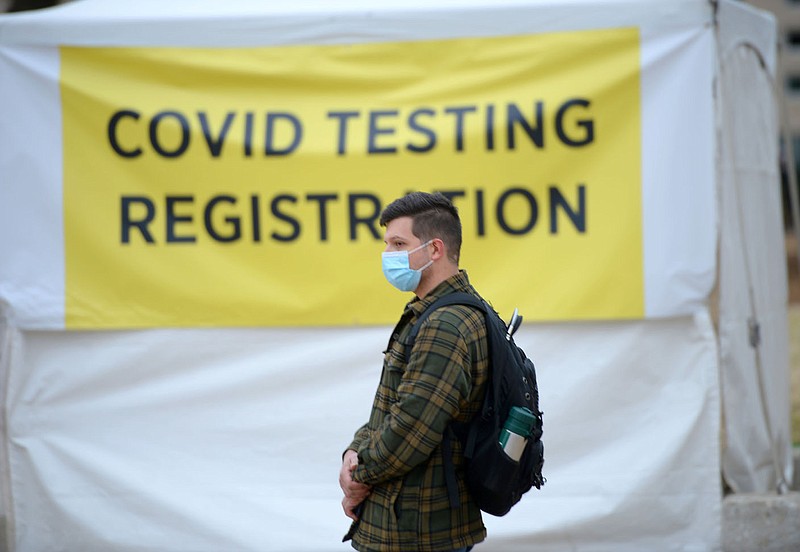 Christian Vest of Hot Springs, an undergraduate student at the University of Arkansas, Fayetteville, waits in line to receive a covid-19 test at the Arkansas Union Mall on the university campus in this Jan. 19, 2022, file photo. The university hosted walk-up testing through Feb. 18 for members of the campus community who were not feeling symptoms of sickness from the coronavirus. (NWA Democrat-Gazette/Andy Shupe)

The downward trend in Arkansas' new case numbers continued on Wednesday as the state's count rose by just 97.

It was the third-smallest increase this year and the smallest that wasn't on a Sunday or Monday, when the numbers tend go down because of slowdowns in testing and reporting over the weekend.

The smallest so far this year was the 21 cases that were added Monday, followed by the 38 reported Sunday.

By contrast, during the surge of infections from the omicron variant, the state added more than 10,000 cases a day on several days in January.

"I think that it's consistent with the trends we've seen with omicron in general -- a very steep rise and a steep decline," Dr. Jennifer Dillaha, the state Department of Health's chief medical officer, said Wednesday.

"The decline has gotten so that it's near the bottom of the curve."

In a reflection of the drop in the state's hospitalized covid-19 patients since January, University of Arkansas for Medical Sciences Chancellor Cam Patterson tweeted Wednesday evening that UAMS Medical Center in Little Rock "officially has 0 patients in hospital for active COVID."

"Down from 100 @ our Omicron peak," Patterson said in the tweet.

"I hope Team UAMS is able to take a breath & relax. We are not out of the woods, but it's nice to have a vision of a better future. Get vaxxed and respect each other!"

Statewide, the number of people hospitalized with covid-19 fell by three, to 119, after rising the previous two days.

The state's death toll from the virus, as tracked by the Health Department, rose by seven, to 11,218.

Dillaha said all the deaths reported Wednesday happened within the past month.

Compared with last week, this week's new case numbers have been lower at least in part because the Health Department no longer has a backlog of faxed-in positive test results from providers that built up during the omicron surge.

State officials have said the last of the cases from the backlog were entered into the department's system early last week.

The prevalence of at-home tests, the results of which don't have to be reported to the department, also has likely contributed to the downturn in new cases, Dillaha said.

"I'm sure it plays a role," she said, adding that officials are "now more focused on hospitalizations and stress on the health system as more of a measure of the severity of any given surge."

Because it's more contagious than the original omicron strain, she said it's possible that the subvariant known as BA.2 will lead to a resurgence of cases.

According to U.S. Centers for Disease Control and Prevention estimates updated Tuesday, BA.2 caused 54.9% of cases nationwide last week, up from 39% the previous week.

"It's hard to predict, if we did see an increase, how steep it would be because there's so much overlap" in the protection from the two omicron strains afforded by vaccines or immunity from a previous infection, Dillaha said.

She said her concern is that BA.2 is so contagious that it will "find the susceptible people in the population to infect."

She noted that BA.2 has been blamed for surges in European countries and, more recently, upticks in cases in some northeastern U.S. states that were hit with the original omicron strain before Arkansas.

"Within the next few weeks, I would guess, if we're going to see a surge, we would start seeing it," Dillaha said.

Pulaski County had the most new cases, 14, on Wednesday, followed by Hot Spring County with eight and White County with seven.

Forty-two of the state's 75 counties didn't have any new cases.

Statewide, the average daily increase in the state's case count over a rolling seven-day period fell Wednesday to 124, dropping below the low of 134 that it reached last year, on June 1.

It was the lowest average since May 20, 2020, just over two months after the state's first case was identified.

Already at its lowest level since May 2020, the number of cases in the state that were considered active fell Wednesday by 47, to 1,191, as recoveries and deaths outpaced new cases.

For the third consecutive day, the number of the state's virus patients who were on ventilators remained at 26, the smallest number since May 2.

After falling by one a day earlier, the number who were in intensive care remained at 37.

Arkansas Children's, which in January had as many as 46 covid-19 patients at its hospitals in Little Rock and Springdale, had only two Wednesday, the same number as a day earlier.

Spokeswoman Hilary DeMillo said none of the patients as of Wednesday were on ventilators or in intensive care.

The Health Department's tally of vaccine doses that had been administered rose by 1,081, which was smaller by 337 than the daily increase a week earlier.

Booster shots made up 35% of the most recent increase.

The count of first doses rose by 373, which was down by 158 from the increase in first doses a week earlier.

Already at its lowest level since the Health Department started regularly releasing vaccination numbers in January 2021, the average number of total doses administered each day over a rolling seven-day period fell to 867, the first time it had been below 900.

The average for first doses, also already at a record low, fell to 296.

According to the CDC, 66.2% of Arkansans had received at least one dose as of Wednesday, a percentage that hadn't changed since Tuesday.

The percentage who had been fully vaccinated rose from 53.9% as of Tuesday to 54%.

Of those who had been fully vaccinated, 38.7% had received a booster dose as of Wednesday, up from 38.6% a day earlier.

Among the states and District of Columbia, Arkansas continued to rank 37th in the percentage of its residents who had received at least one dose.

In the percentage who were fully vaccinated, it rose from 46th to being roughly tied with Tennessee for 45th, ahead of Idaho, Louisiana, Mississippi, Wyoming and Alabama.

Nationally, 76.9% of people had received at least one dose, and 65.5% were fully vaccinated.

Of the fully vaccinated population nationally, 44.8% had received a booster dose.